3 Capital budgeting Capital budgeting is the process of evaluating long-range investment proposals for the purpose of allocating limited resources effectively and efficiently. Capital Budgeting techniques are employed to assess the financial viability of the project. Suppose, for instance, a company wants to introduce a new soap and launching of the new product demands changes in the manufacturing process, the company will have to purchase new equipment in the form of fixed assets. Capital budgeting is a technique used to evaluate the value of investment and projects in fixed assets. It is also used to assess the working capital requirements.

5 Pay back period: In this technique, we try to figure out how long it would take to recover the invested capital through positive cash flows of the business. Decision Criteria: In two projects, the project with less payback period should be acceptable.

8 The cafe example Q1. An initial investment of $ 200,000 is required to start the business; $ 10,000 per month are expected to be earned for the first year, and $ 20,000 would be earned every month in the second year. Acceptance policy for payback period is 16 months. Q2. Consider Capital Budgeting project A which yields the following cash flows over its five year life with initial investment of $1000. Year Cash Flows, -1000, 500, 400, 200, 200, 100. find out its payback period? If your company policy for acceptable payback period is 3, will you reject or select this project?

10 Limitations of ROI 1.it does not take into account the time value of money concept. 2.Ignores the risk associated with a project or investment.

12 Decision criteria A high ROI ratio is considered better and 90% is a very good rate of return but before deciding whether or not this project should be taken up, we should compare this project with the alternative opportunities on hand.

14 NPV The formula for calculating NPV is as follows: NPV=-IO+ΣCFt/ (1+i) t Where, CFt=cash flows occurring in different time periods -IO= Initial cash outflow i=discount /interest rate t=year in which the cash flow takes place Initial cash outflow, being an outflow, is always expressed as a negative figure.

15 Limitation The disadvantage with the NPV is that it is difficult to calculate since these calculations are based on too many estimates. Decision criteria: If the NPV of a project is more than zero, it should be accepted. If two or more projects under contemplation, then the one with the higher NPV, should be accepted.

21 Internal Rate of Return (IRR) IRR is a widely used and an important measure, which is more common in practice than the NPV. IRR, unlike NPV that is expressed in dollar amounts, is always quoted in terms of percentage, which makes it comparable to the other market interest rates or the inflation rate. IRR calculation involves the same equation that we have earlier used for the calculation of NPV. The only difference is that while calculating IRR we would set the value of NPV equal to zero and then solve the equation for the value if ‘i’. In other words, the value of ‘i’, at which the net present value of the project equals zero would be considered as the internal rate of return of the project.

22 IRR is calculated by a trial and error method or iteration. In a trial-and-error method, we tryout a value of ‘i’, and see if the equation comes to the value of zero; if it does not, try another value, even if the second value does not bring the equation down to zero and so on. NPV= -IO +CF1/ (1+IRR) + CF2/ (1+IRR) 2 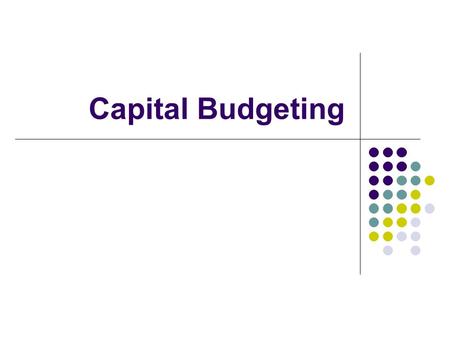 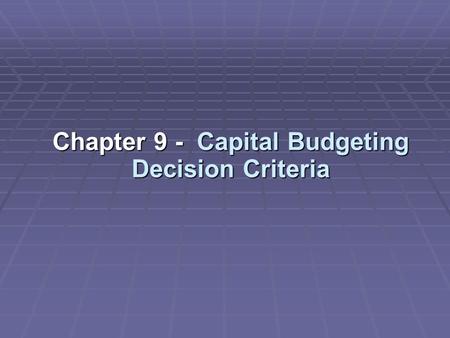 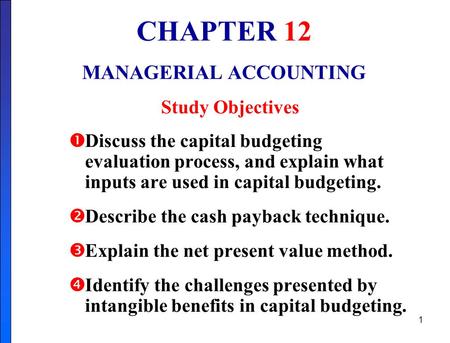 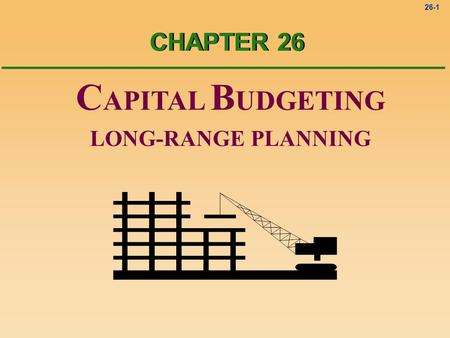 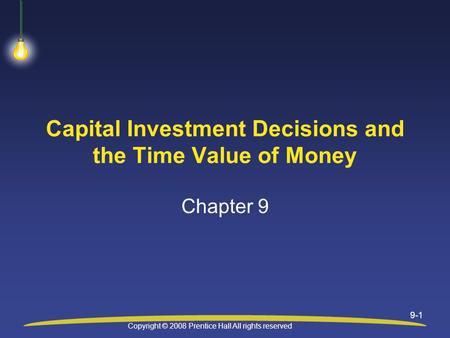 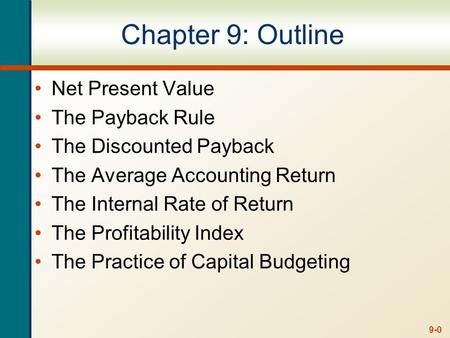 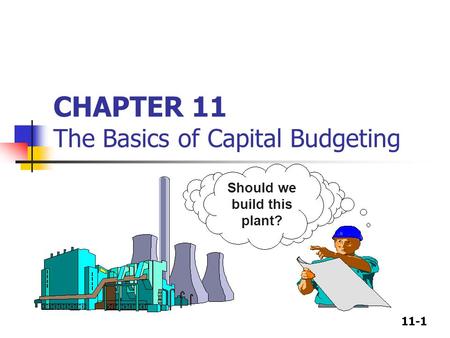 11-1 CHAPTER 11 The Basics of Capital Budgeting Should we build this plant? 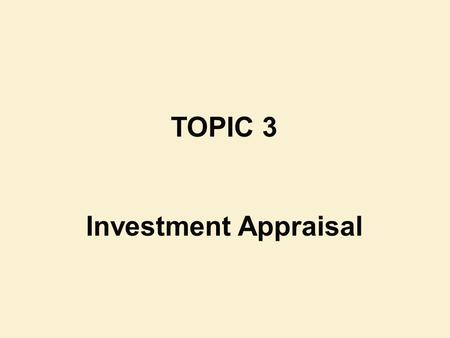 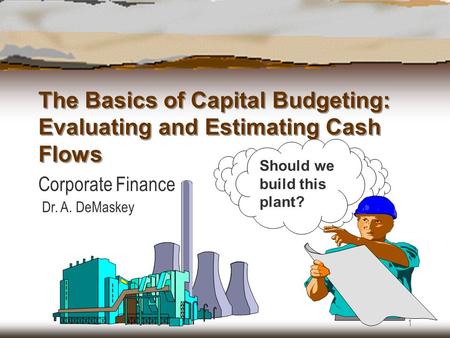 1 The Basics of Capital Budgeting: Evaluating and Estimating Cash Flows Corporate Finance Dr. A. DeMaskey Should we build this plant? 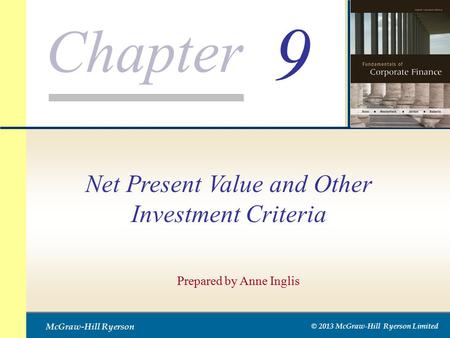 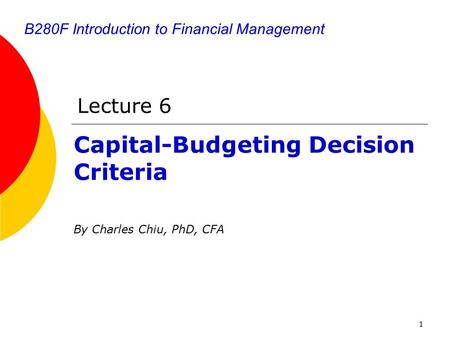 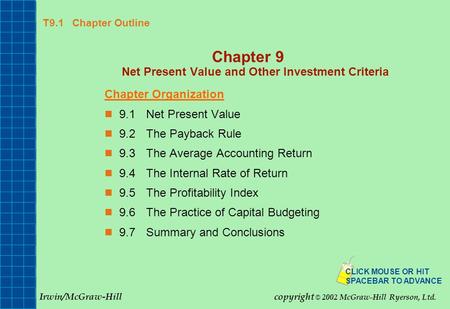 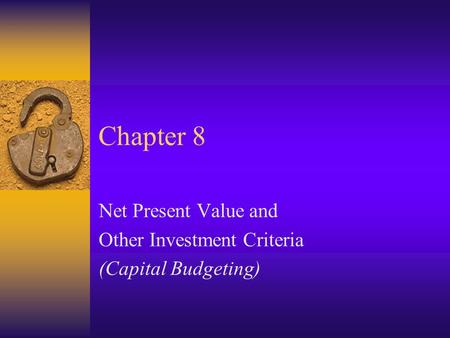 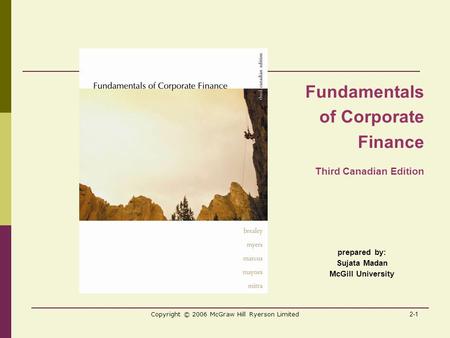 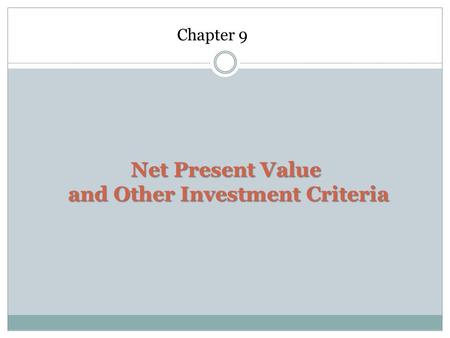 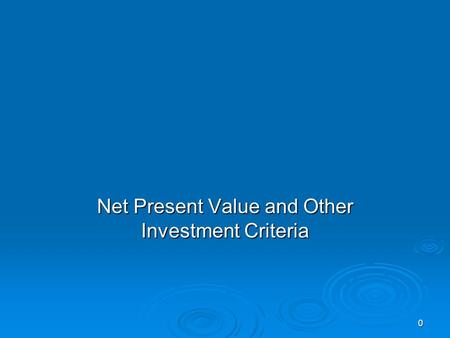 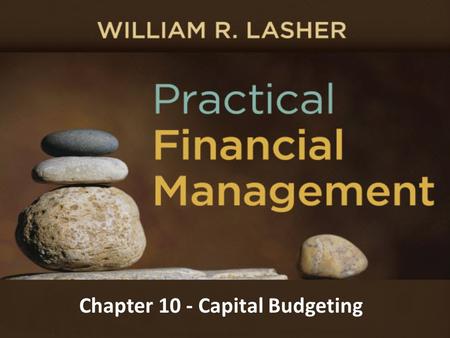 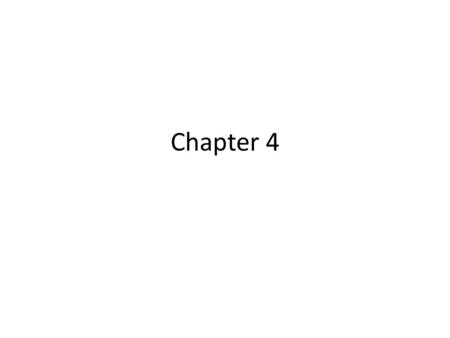 Chapter 4. Economic Factors in Design The basis of design decisions will be economics. Designing a technically safe and sound system will be only part. 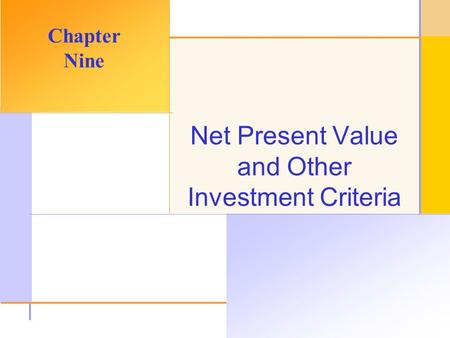 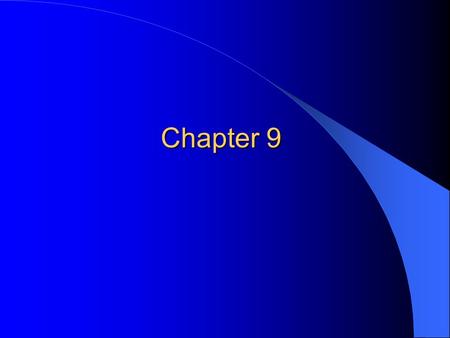