1 European Union EMU and the Stability and Growth Pact

3 What is the Growth and Stability Pact The pact says that  each EU member state must run a balanced budget in the medium term  and that no country's deficit should exceed 3 per cent of GDP.

4 SGP – did it work During the late 1990s the pact worked well; 11 of the 15 countries used the proceeds of the economic boom to eliminate deficits and to pay back national debt. Countries such as Greece and Spain now seem models of fiscal rectitude.

6 Criticisms of the SGP Too rigid Four countries that failed to tackle structural deficits before the downturn started - France, Germany, Italy and Portugal - have borne the brunt. They say the pact is pro-cyclical, forcing them to cut spending just when their economies need a boost  But in France's case, the budgetary burden arising from its ageing population will start increasing rapidly from 2005 onwards, making it even more difficult to get things back into balance.  In the case of Germany, its rigid wage-setting system continues to keep the cost of employing people in depressed regions well above the value of what their work will produce, and this will keep them on welfare and will keep pushing up the Government's budget deficit

7 EU Commission takes action In November 2003: France and Germany escaped the threat of fines for breaking the European Union's fiscal rules after a proposal to suspend the sanctions mechanism of the stability and growth pact was approved by EU finance ministers.  Last month's decision by the European Commission not to enforce the rules in the case of France and Germany has effectively killed off the pact as a coercive instrument and prompted EU governments to consider a change in the rules. Why is the European Commission taking legal action now?

8 Does EU need the SGPact Everyone agrees the euro needs a set of rules to join up national economic policies. WHY  Excessive government borrowing in one eurozone country could feed inflation and force up interest rates for everyone

9 Ahern and the Stability and Growth Pact Mr Ahern said the pact, which limits borrowing to 3 per cent of GDP, was designed to control day-to-day spending by governments. "We have a number of areas where we need to be able to spend money on the capital side to deal with these infrastructural deficits so that we would not be in a position where it will work against us to build up economic growth (IT 9.5.03)

10 SGP’s demise 9( IT 2. 1 04) 2003 – ‘ the year that saw the destruction of the Stability and Growth Pact at the hands of France and Germany, Europe's biggest economies. 2004 is likely to see a debate about reforming the Stability and Growth Pact that could lead to calls  for the broadening of the ECB's mandate to include encouraging economic growth.  At present, the sole purpose of the ECB's monetary policy is to maintain price stability, which is defined as keeping inflation below but close to 2 per cent

11 Ireland - From rags to riches:  1987 incomes in Ireland, measured by GDP per head, were just 63% of Britain’s  Government borrowing was so badly out of control in the ten years to 1987 that public debt soared from 65% of national income to nearly 120%

12 2003 - Ireland GDP increased by 6.9 per cent, GNP measure, which relates more directly to the domestic sector, recorded an increase of just 0.1 per cent last year, the lowest growth rate of this variable since the mid-1980s.

13 A General Government Deficit of around 1 per cent of GDP is in prospect; The debt/GDP ratio is forecast to remain broadly stable at 34 percent;

14 Ireland – economic prospects our economic prospects going forward there are a number of key facts which we have to acknowledge and respond to positively: - firstly, we are part of a monetary union where the overriding policy objective is a low-inflation environment of 2 per cent, or less, per annum; — secondly, international competition is exerting downward pressure on goods prices and is likely to continue to do so for some time to come; — thirdly, we are one of the most open economies in the world; and — finally, international competition for jobs and investment is becoming much more intense all the time.

15 2012 There are essentially four key elements of note in the fiscal treaty: The establishment of a ‘Golden Rule’ to ensure budgetary discipline The policing of the Golden Rule at national level through so- called ‘debt brakes’ The policing of national budgetary control at supranational level through a stricter excessive deficit procedure, including legal penalties and control by the European Court of Justice New institutional architecture for euro area governance

16 The NUMBERS - 2012 the Golden Rule and other numerical benchmarks are long-term objectives given that the vast majority of Member States are currently not compliant with the Golden Rule and convergence criteria (see table below). Furthermore, the fiscal treaty allows states that have ratified its content to deviate from these targets in case of ‘exceptional circumstances’, defined as ‘an unusual event outside the control’ of a state ‘which has a major impact on the financial position of the general government’ or in ‘periods of severe economic downturn’. The exceptional circumstances clause could be claimed by almost all Member States from the moment the fiscal treaty enters into force, which nullifies the impact of the numerical benchmarks in thetreaty. 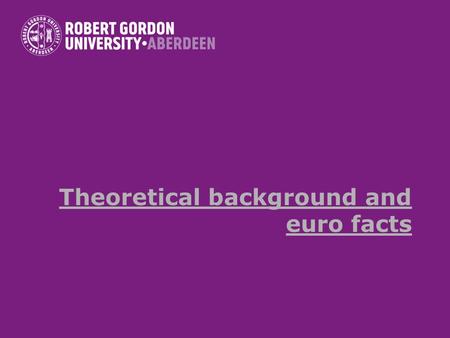 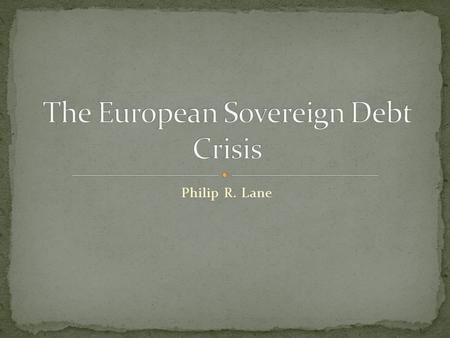 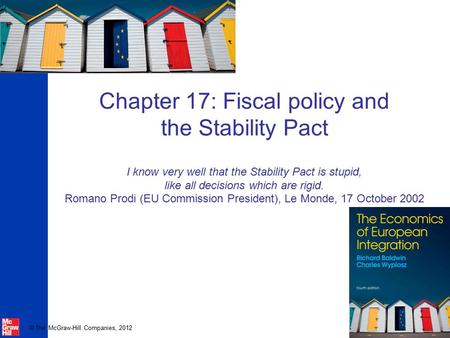 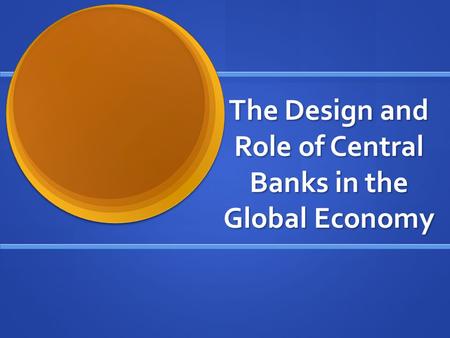 The Design and Role of Central Banks in the Global Economy. 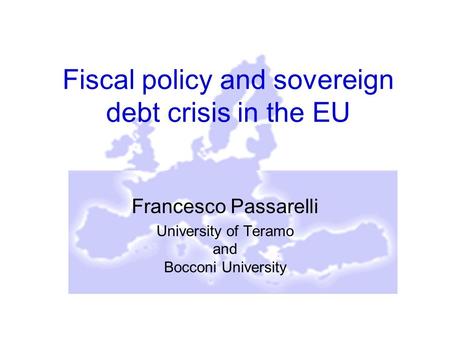 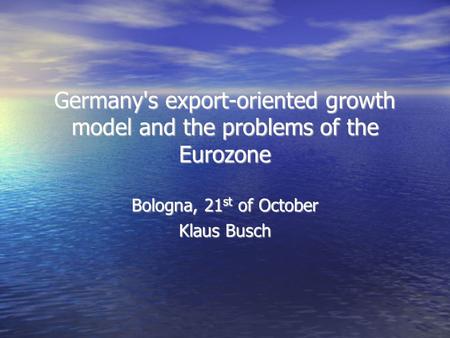 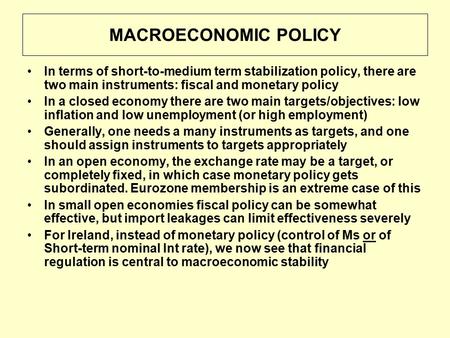 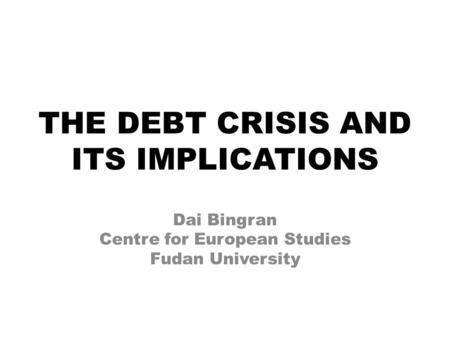 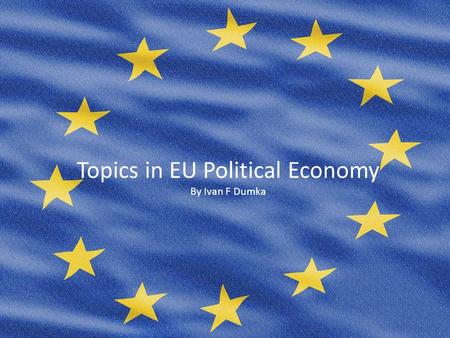 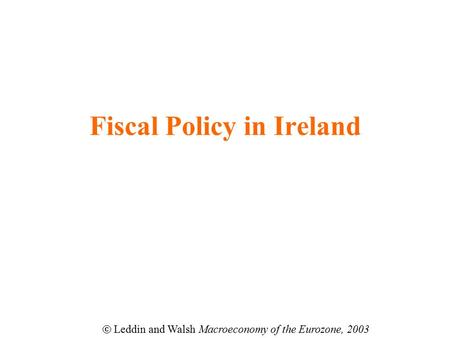 Fiscal Policy in Ireland  Leddin and Walsh Macroeconomy of the Eurozone, 2003. 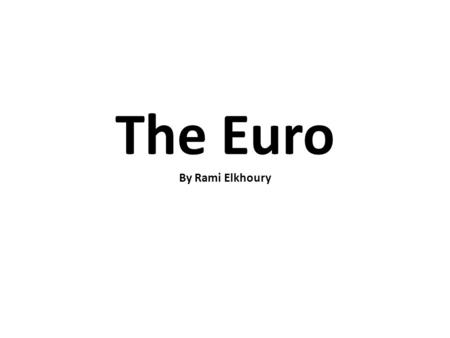 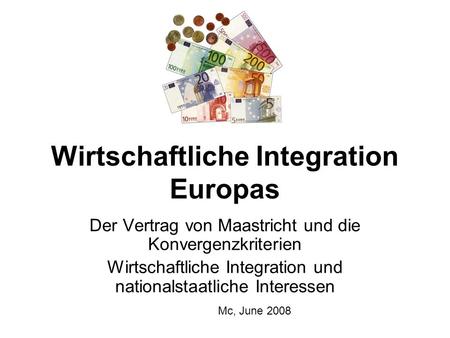 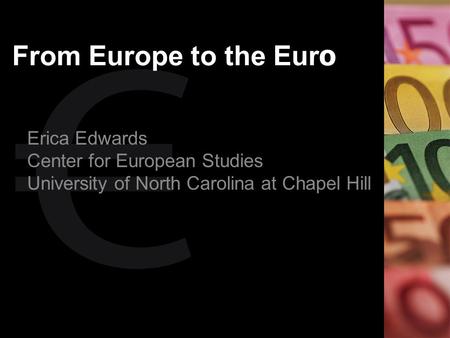