Presentation on theme: "TITLE VI OF THE 1964 CIVIL RIGHTS ACT 42 U.S.C § 2000d No person in the United States shall, on the ground of race, color, or national origin, be excluded."— Presentation transcript:

1 TITLE VI OF THE 1964 CIVIL RIGHTS ACT 42 U.S.C § 2000d No person in the United States shall, on the ground of race, color, or national origin, be excluded from participation in, be denied the benefits of, or be subjected to discrimination under any program or activity receiving Federal financial assistance.

2 May 1975 DHEW Memorandum Sent To School Districts With More Than Five Percent National Origin - Minority Group Children The purpose of this memorandum is to clarify DHEW policy on issues concerning the responsibility of school districts to provide equal educational opportunity to national origin-minority group children deficient in English language skills.

3 1. Where inability to speak and understand the English language excludes national origin-minority group children from effective participation in the educational program offered by a school district, the district must take effective steps to rectify the language deficiency in order to open its instructional program to these students.

4 2. School districts must not assign national origin-minority group students to classes for the mentally retarded on the basis of criteria which essentially measure or evaluate English language skills; nor may school districts deny national origin-minority group children access to college preparatory courses on a basis directly related to the failure of the school system to inculcate English language skills

5 3. Any ability grouping or tracking system employed by the school system to deal with the special language skill needs of national origin-minority group children must be designed to meet such language skill needs as soon as possible and must not operate as an educational dead-end or permanent track.

6 4. School districts have the responsibility to adequately notify national origin- minority group parents of school activities which are called to the attention of other parents. Such notice in order to be adequate may have to be provided in a language other than English.

7 “[T]he [California] Education Code provides that no pupil shall receive a diploma of graduation from grade 12 who has not met the standards of proficiency in "English," as well as other prescribed subjects. Moreover, by 12101 of the Education Code (Supp. 1973) children between the ages of six and 16 years are (with exceptions not material here) “subject to compulsory full-time education.” “Under these state-imposed standards there is no equality of treatment merely by providing students with the same facilities, textbooks, teachers, and curriculum; for students who do not understand English are effectively foreclosed from any meaningful education.” Lau v. Nichols (1974)

8 “Basic English skills are at the very core of what these public schools teach. Imposition of a requirement that, before a child can effectively participate in the educational program, he must already have acquired those basic skills is to make a mockery of public education. We know that those who do not understand English are certain to find their classroom experiences wholly incomprehensible and in no way meaningful.”

9 Lau v. Nichols (1974) “It seems obvious that the Chinese-speaking minority receive fewer benefits than the English- speaking majority from respondents' school system which denies them a meaningful opportunity to participate in the educational program - all earmarks of the discrimination banned by the regulations.”

10 Equal Educational Opportunities Act of 1974 20 U.S.C. § 1703 “No State shall deny equal educational opportunity to an individual on account of his or her race, color, sex, or national origin, by – (f) the failure by an educational agency to take appropriate action to overcome language barriers that impede equal participation by its students in its instructional programs.”

11 Castañeda v. Pickard 5 th Circuit Court of Appeals 1981 “In a case such as this one in which the appropriateness of a particular school system's language remediation program is challenged under § 1703(f), we believe that the responsibility of the federal court is threefold.”

12 Castañeda v. Pickard 5 th Circuit Court of Appeals 1981 “First, the court must examine carefully the evidence the record contains concerning the soundness of the educational theory or principles upon which the challenged program is based. The court's responsibility, insofar as educational theory is concerned, is only to ascertain that a school system is pursuing a program informed by an educational theory recognized as sound by some experts in the field or, at least, deemed a legitimate experimental strategy.”

13 Castañeda v. Pickard 5 th Circuit Court of Appeals 1981 “The court‘s second inquiry would be whether the programs and practices actually used by a school system are reasonably calculated to implement effectively the educational theory adopted by the school. We do not believe that it may fairly be said that a school system is taking appropriate action to remedy language barriers if, despite the adoption of a promising theory, the system fails to follow through with practices, resources and personnel necessary to transform the theory into reality.”

14 Castañeda v. Pickard 5 th Circuit Court of Appeals 1981 “Finally, a determination that a school system has adopted a sound program for alleviating the language barriers impeding the educational progress of some of its students and made bona fide efforts to make the program work does not necessarily end the court's inquiry into the appropriateness of the system's actions.”

15 Castañeda v. Pickard 5 th Circuit Court of Appeals 1981 “If a school's program, although premised on a legitimate educational theory and implemented through the use of adequate techniques, fails, after being employed for a period of time sufficient to give the plan a legitimate trial, to produce results indicating that the language barriers confronting students are actually being overcome, that program may, at that point, no longer constitute appropriate action as far as that school is concerned.”

16 Castañeda v. Pickard 5 th Circuit Court of Appeals 1981 “We do not believe Congress intended that under § 1703(f) a school would be free to persist in a policy which, although it may have been "appropriate" when adopted, in the sense that there were sound expectations for success and bona fide efforts to make the program work, has, in practice, proved a failure.”

17 Castañeda v. Pickard 5 th Circuit Court of Appeals 1981 “We understand § 1703(f) to impose on educational agencies not only an obligation to overcome the direct obstacle to learning which the language barrier itself poses, but also a duty to provide limited English speaking ability students with assistance in other areas of the curriculum where their equal participation may be impaired because of deficits incurred during participation in an agency's language remediation program. If no remedial action is taken to overcome the academic deficits that limited English speaking students may incur during a period of intensive language training, then the language barrier, although itself remedied, might, nevertheless, pose a lingering and indirect impediment to these students' equal participation in the regular instructional program.”

18 Recent (Last Two Months) Civil Rights Actions To Improve the Education Of Limited-English-Proficient Students LAUSD Agrees to undertake a comprehensive revision of all instructional programs and services after U.S. Education Department – Office for Civil Rights Compliance Review found systemic violations of Title VI and EEOA. The State of Massachusetts has agreed to develop and implement a state- wide program of mandatory teacher training in “sheltered instruction” for general classroom teachers after U.S. Department of Justice found most state teachers unqualified to teach content to LEP students in violation of the EEOA. The New York State Department of Education ordered New York City to open 125 new bilingual schools for LEP students over the next three years.

Download ppt "TITLE VI OF THE 1964 CIVIL RIGHTS ACT 42 U.S.C § 2000d No person in the United States shall, on the ground of race, color, or national origin, be excluded." 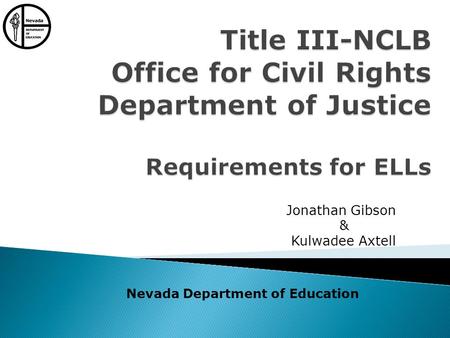 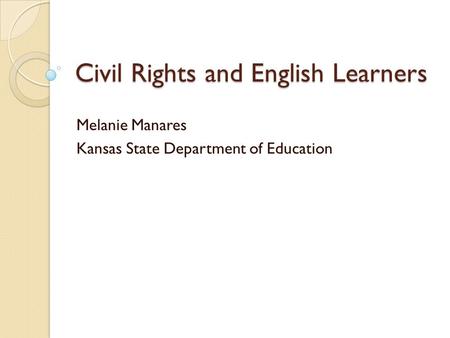 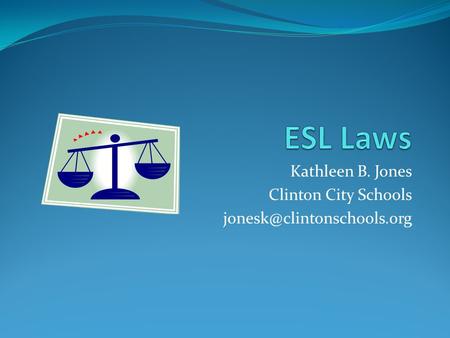 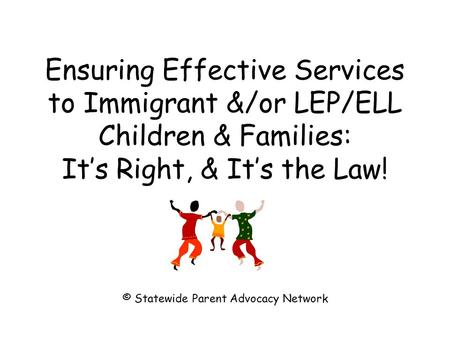 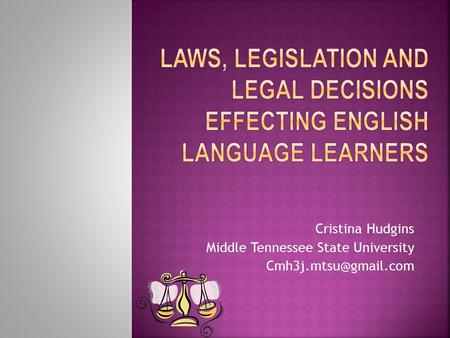 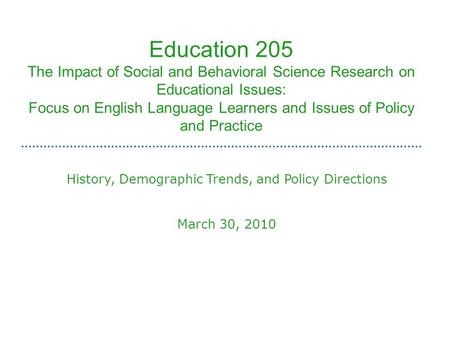 Education 205 The Impact of Social and Behavioral Science Research on Educational Issues: Focus on English Language Learners and Issues of Policy and Practice. 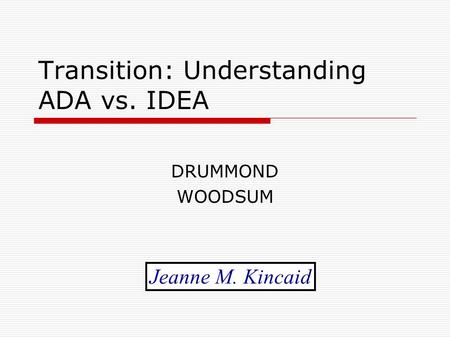 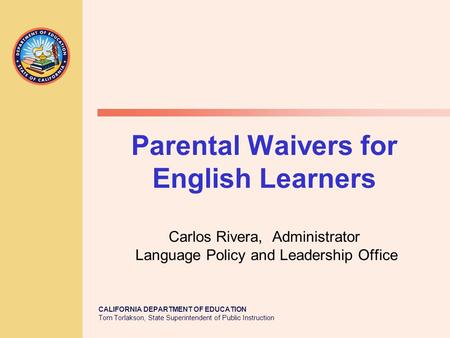 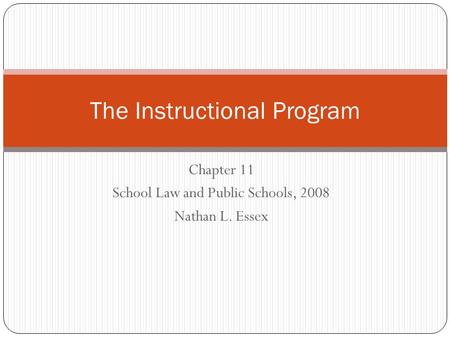 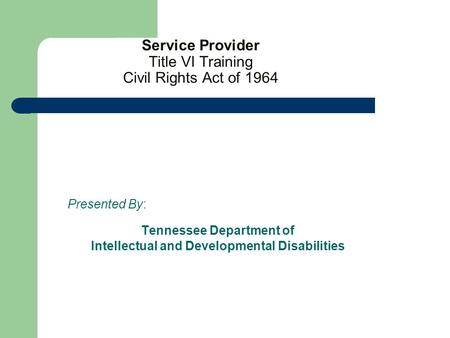 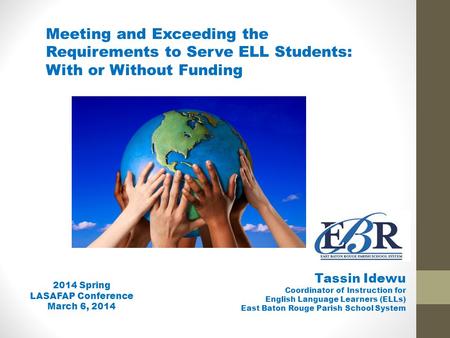 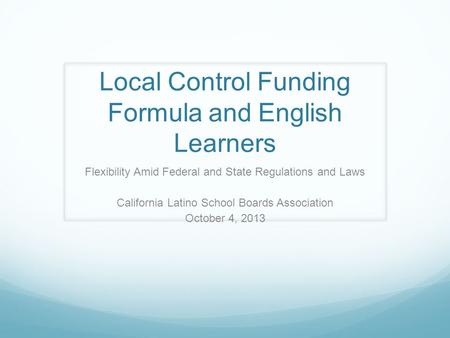 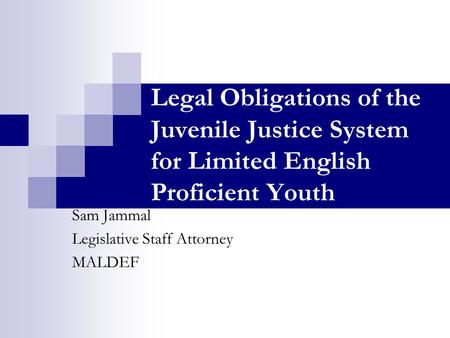 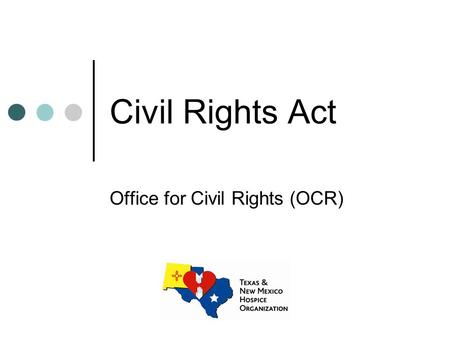 Civil Rights Act Office for Civil Rights (OCR). What Laws Does OCR Enforce? “No person shall on the ground of race, color or national origin, be denied. 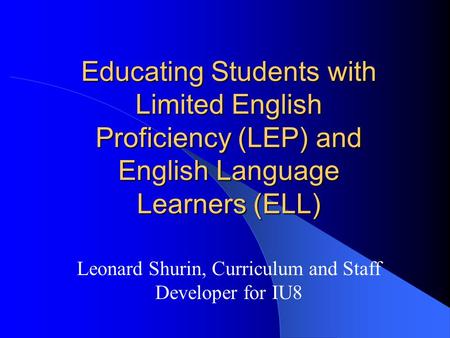 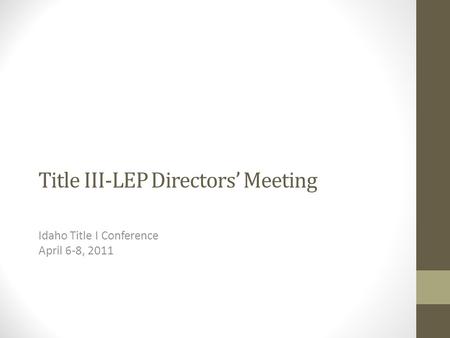 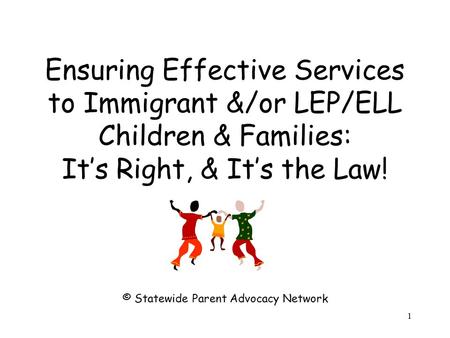 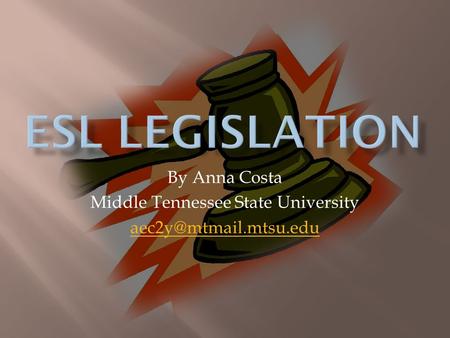 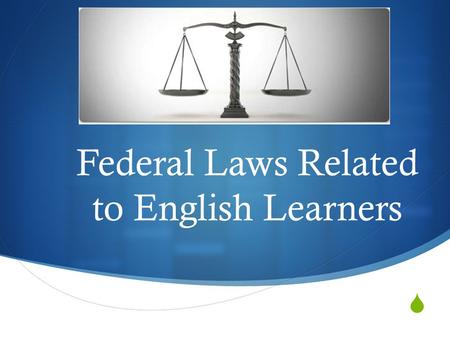 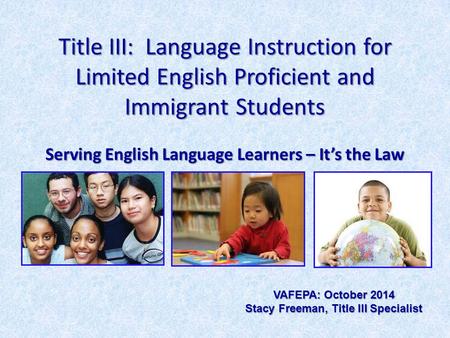