Presentation on theme: "Thesis Statement: The murder mystery genre is a genre that is overly dramatic as compared to real life murders in order to help the readers feel like they."— Presentation transcript:

1 Thesis Statement: The murder mystery genre is a genre that is overly dramatic as compared to real life murders in order to help the readers feel like they are the detective; it is a genre that people go to when they’re looking for a thrill and a way for them to use their minds to solve something by themselves.

3 Question 2: What truths are best communicated through the Murder Mystery genre?
You figure out what kind of brain you have, and how it works to figure things out.

4 Question 3: Is there a difference between real life murder cases and books from the murder mystery genre? If so, what are they? Real Life Cases Not always solved Take longer to solve More suspects Not as much evidence Real cases Many people working on a case ("How Detectives Solve a Murder) There is evidence gathered and preserved over time, there is testing and lie detector tests and interrogations‘. A lot more goes on in real cases than in books. ("How Detectives Solve a Murder) Murder mystery books Always solved Usually solved within a certain amount of time. Always stays on track Always more interesting Usually just one or two people trying to figure out the case There is usually no outside people, no lab DNA testing, just one or two people who go through a series of events to get them (or the reader) to the murderer, collecting clues and storing things in there brains. There is always a story behind the murder, like a movie ("Stephen Baldwin pens murder mystery”) Mainly very dramatic deaths and how the victim was found ("Stephen Baldwin pens murder mystery”)

5 Question 7: Should the author reveal the Murderer at the beginning of the book or at the end of the book? If revealed at the beginning, does it take away from the mystery? Authors should leave the revealing until the end. Or at least wait as long as they can. (“Ten Rules for Mystery Writing.“) By revealing the murderer in the beginning of the book, you take away from the mystery and excitement of trying to figure out who did it. (“Ten Rules for Mystery Writing.“) “They're reading to find out, or figure out, whodunit. If you answer this too early in the book, the reader will have no reason to continue reading” (“Ten Rules for Mystery Writing.“) They also should not try and trick the readers because that will take away from fun of reading them, If there trying to figure something out and get confused, they might loose interest.

6 Books I’ve Read For Mike by: Shelly Sykes
Jeremy Fink and the Meaning of Life by: Wendy Mass

Download ppt "Thesis Statement: The murder mystery genre is a genre that is overly dramatic as compared to real life murders in order to help the readers feel like they." 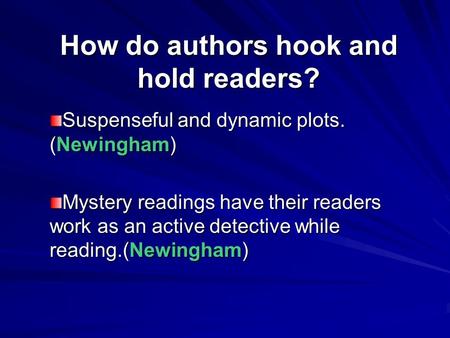 How do authors hook and hold readers? 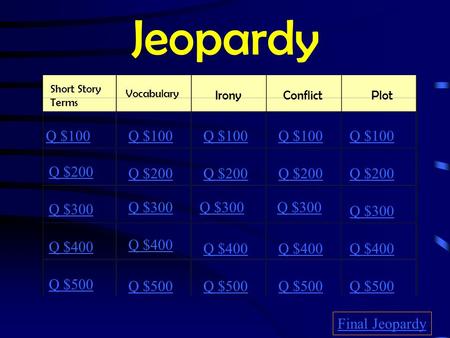 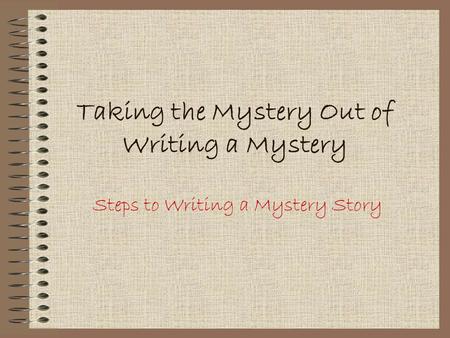 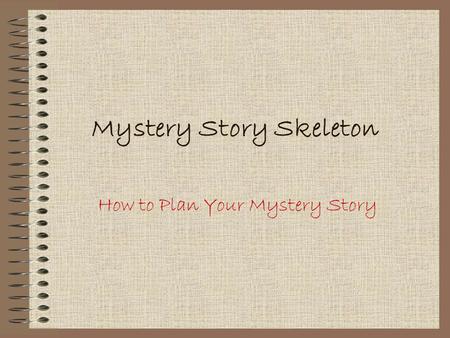 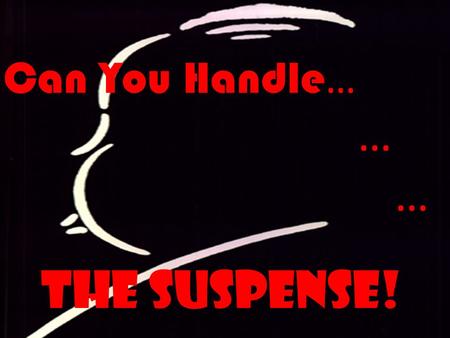 Can You Handle … … … The SUSPENSE!. How often did you find yourself “anticipating” what might happen to Rainsford next? When does “The Most Dangerous. 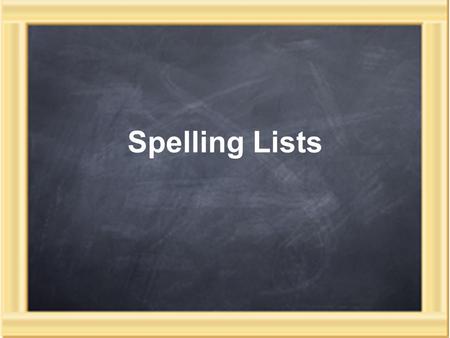 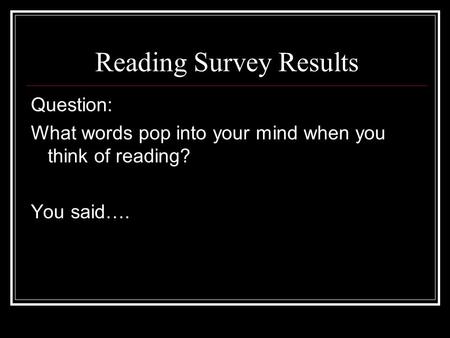 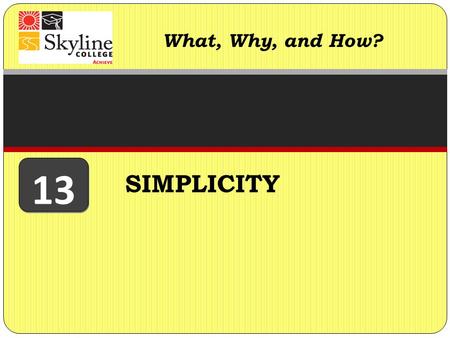 SIMPLICITY What, Why, and How? 13. “If you can't explain it to a six year old, you don't understand it yourself.” ― Albert Einstein WHAT IS SIMPLICITY. 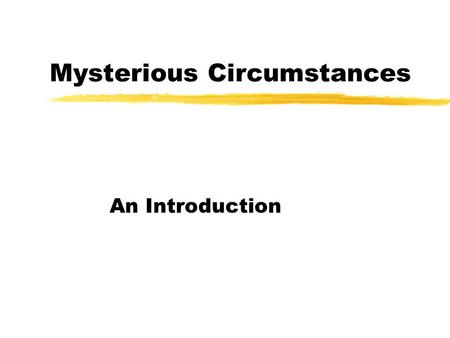 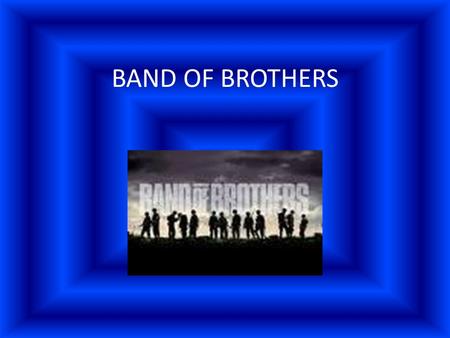 BAND OF BROTHERS. Genre My book is a nonfiction memoir, because it is a true account of D-day, Point of view. My book is written in third person omniscient. 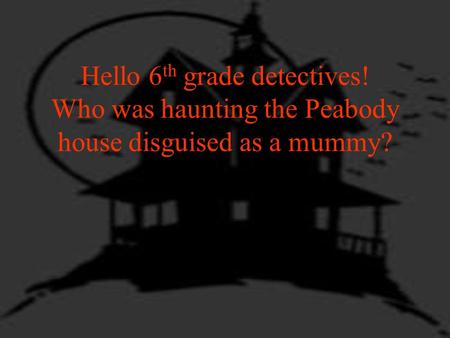 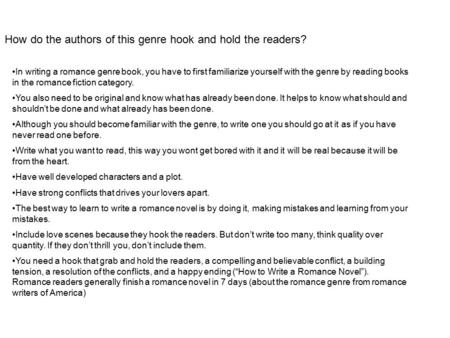 How do the authors of this genre hook and hold the readers? In writing a romance genre book, you have to first familiarize yourself with the genre by reading. 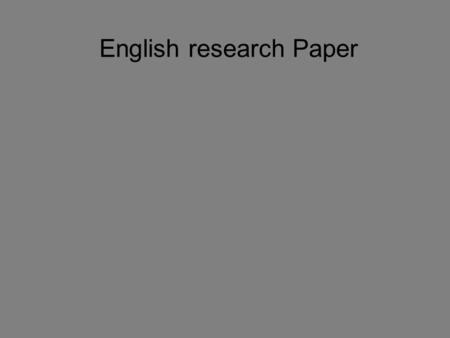 English research Paper. How do Thriller-suspense Authors hook and hold readers? According to Jack King, the author of many thriller books, authors start.