4 Why was C. Wright Mills important in Sociology?  He developed the idea of the sociological imagination.  This is the ability to make connections between ourselves and society. We recognize that our choices affect others and others affect us in turn. Ideally, we can use this to make more informed decisions about our lives.

6 Why was the Enlightenment important to the development of Sociology?  The Enlightenment was a movement away from religion and faith.  It emphasized reason, logic, math, and science.

7 Why were the American and French Revolutions important to the development of Sociology?  Both Revolutions focused on individual rights.  They were movements away from monarchies and towards a democratic system based on liberty and equality for all.

9 Why was Auguste Comte significant?  Auguste Comte is known as the Father of Sociology.  He was the first to use the word ‘sociology.’  After the violence and chaos of the French Revolution, he worked for a stable and orderly society.

10 Why is Herbert Spencer significant?  Herbert Spencer adapted Charles Darwin’s theory of evolution and stated that some groups of humans were naturally better than others.  He believed that society would improve if all of the ‘unfit’ would die out. He called this idea Social Darwinism, or ‘survival of the fittest.’  He also believed in an orderly, stable society.  His ideas were popular at the time and influenced major developments, like the Holocaust.

11 Why was Emile Durkheim significant?  Emile Durkheim believed sociologists should study only what is directly observable.  He first used statistics in his research.  Since he was interested in order and stability, he researched functions. –Functions are organizations that exist to help maintain order in society. Such as….

12 Why was Karl Marx significant?  Karl Marx believed the bourgeoisie were exploiting the proletariat during the Industrial Revolution.  He thought the poor should earn just as much as the rich, thereby creating a class-less, or equal, society.  These ideas came to be known as communism. They would later become perverted by dictators, such as Stalin and Mao Zedong.  Marx thought the only way society would progress is through change, and change was necessary due to conflict between competing groups.

13 What were Marx’s terms for the rich and the poor?  The bourgeoisie were the owners of the means of production, or the rich. They typically were owners of factories, mines, or railroads.  The proletariat were the workers. They typically worked for the bourgeoisie for very little wages under poor conditions. Marx hated this inequality and proposed that workers share the profits that the company makes equally.

14 Why was Max Weber significant?  Max Weber believed in studying an individual’s thoughts and feelings.  He advocated Verstehen, or understanding someone else’s perspective.  He can be thought of as a social psychologist. 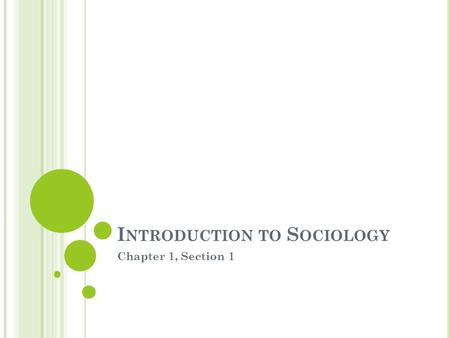