2 THE HUMAN INSTRUMENT Like most musical instruments, the human voice has a sound source (the vocal folds), a resonator (the vocal tract), and a radiator (the mouth). The vocal tract (resonator) is highly tunable by using muscles of the pharanx and especially the tongue. The resonances of the vocal tract are called formants. From “The Human Instrument” by Ingo Titze, Scientific American, Jan. 2008

4 FORMANTS AND PITCH In both speech and singing, there is a division of labor between the vocal folds and the vocal tract. The vocal folds control the pitch, while the vocal tract determines the vowel sound through formant (resonances) frequencies and also articulates the consonants. Typical formants of male and female speakers represented on a musical staff.

5 FIRST AND SECOND FORMANTS OF VOWELS

7 VOWEL /æ/ AS SPOKEN AND SUNG

9 SPECTRUM OF /α/ WITH HIGH AND LOW LARYNX

15 BREATHING Lung capacity in the young adult and its subdivision into functioning volumes. Volume of male lung is shown at left, female at right.

20 VOCE VISTA Voce Vista is a feedback and analysis system, developed by Donald Miller, especially for the singing voice. It records and displays signals from a microphone and electroglottograph. Waveform, spectrogram, and spectrum of a soprano singing an octave scale. The cursor, at 4168 ms, marks the 2 nd harmonic of F5 at 1385 Hz which has a level of -15 dB.

23 NONLINEAR vs LINEAR MODELS OF PHONATION THE LINEAR MODEL OF SPEECH AND SINGING ASSUMES THAT THE SOURCE (GLOTTIS), FILTER (VOCAL TRACT) AND RADIATOR (MOUTH, NOSE) ACT INDEPENDENTLY. The linear model successfully explains many aspects of speech and singing. As long as the dominant source frequencies are well below the formant frequencies of the vocal tract (generally true in male speech), the source is influenced only slightly by the filter. In female and child speech, however, the interaction is greater. Recent research suggests that singers can operate their source-filter systems with either linear or nonlinear coupling. For linear coupling the source impedance (transglottal pressure divided by glottal flow) is kept much higher than the input impedance to the vocal tract. This is accomplished by adducting the vocal folds firmly and widening the epilarynx tube so that glottal flow is determined by aerodynamics, and acoustic pressures above and below the glottis have little influence.

24 NONLINEAR SOURCE-FILTER COUPLING IN PHONATION In nonlinear coupling, the acoustic airway pressures contribute to the production of frequencies at the source. Transglottal pressure includes a strong acoustic component, much as in wind instruments. For nonlinear coupling, the glottal impedance is adjusted to be comparable to the vocal tract input impedance, making the glottal flow highly dependent on acoustic pressures in the vocal tract. This is accomplished by setting adduction levels of the vocal folds that match a narrower epilarynx tube. Evidence of nonlinear coupling is the production of new frequencies in the form of distortion products, resulting in sudden jumps as either vowel of F0 are changed. (see “Modeling source-filter interaction in belting and high-pitched operatic male singing” (I. Titze and A. Worley, JASA 126, 1530 (2009))

25 POSITIVE FEEDBACK TO VOCAL FOLDS Positive feedback from the vocal tract to the vocal folds can increase sound production (this is similar to the positive feedback from a brass instrument to the player’s lips). The ideal timing of the “kick” comes when the movement of the air is delayed with respect to the movement of the vocal folds. The air column then has negative inertance, which helps to sustain the flow-induced oscillation of the vocal folds (see “The Human Instrument” I.Titze, Scientific American Jan. 2008) The singer’s task is to adjust the shape of the vocal tract (by carefully selecting favorable “singing” vowels so that inertive reactance is experienced over most of the pitch range—no easy task

26 CHOIR SINGING Choir singing and solo singing are two distinctly different modes of musical performance, making different demands on the singers. Whereas solo singers want to be heard over the sound of an orchestra or choir, choral singers are expected to “blend” with the voices of their colleagues.

27 CHOIR SINGING Choir singing and solo singing are two distinctly different modes of musical performance, making different demands on the singers. Whereas solo singers want to be heard over the sound of an orchestra or choir, choral singers are expected to “blend” with the voices of their colleagues. A series of experiments at the Royal Institute of Technology in Stockholm compared identical passages sung in “solo” and “choir” modes by singers experienced in both modes. A number of differences were noted, in both male and female singers. Male singers tended to employ a more prominent singer’s formant in the solo mode, while the fundamental was emphasized more in the choir mode, as might be expected (Rossing, Sundberg, and Ternström, 1986). Female singers also tended to produce more energy in the 2-4 kHz range in the solo mode. Changes in both articulation and voice source were noted (Rossing, Sundberg, and Ternström, 1987).

28 AVERAGE SPECTRUM ENVELOPES OF BASS IN SOLO AND CHOIR MODES

29 CHOIR SINGING CHOIR VS. SOLO SINGING Male singers have loss prominent singer’s formant in choir mode. “SELF” TO “OTHERS” RATIO (S0R) Choir singers prefer SOR of about 6dB (average). Measured SORs are 4 dB (single row) to 3dB (double row) In opera chorus, SOR is 10-15 (Ternström, 2005) UNISONS /u/ is more difficult to match to a reference tone than /α/, probably because of lack of harmonics PITCH ACCURACY Standard deviation in a bass section found to be 16 cents

30 Does pitch change when vowel changes? Choral singers sustained long tones, and in the middle of each tone they were asked to change from one (Swedish) vowel to another. (Sundberg, 1987)

31 OVERTONE OR HARMONIC SINGING Overtone singing is a special type of voice production resulting in a separate high tone which can be heard over a more or less constant drone. It is heard during religious and secular festivities in Mongolia, Tuva, and Tibet. In recent years “harmonic” singing has been practiced in Europe and North America. Overtone sound results from an interaction of closely-spaced formants. For lower overtones, these may be the 1 st and 2 nd formants. For overtones with frequency higher than 800 Hz, the overtone sound may result from a combination of the 2 nd and 3 rd formants. Generally a long glottal closure is used in overtone singing. SEE THE WEBSITE http://www.phys.unsw.edu.au/jw/xoomi.html

32 TUVAN THROAT SINGING http://www.youtube.com/watch?v=4kDXGSwiRmA&feature=related http://www.youtube.com/watch?v=MgVqMMDBQrM&feature=related http://www.youtube.com/watch?v=DY1pcEtHI_w&feature=related Tuvan throat singing is one particular variant of overtone singing practiced by the Tuva people of southern Siberia. There are several styles, including khoomei, kargyraa, and sygyt KHOOMEI is the most popular style. The fundamental (drone) is in the low to mid-range of the singer’s voice. Two or 3 harmonics can be heard, 2 to 3 octaves above the fundamental. SYGT (“WHISTLING”) has a mid-range fundamental and is characcterized by rather piercing harmonics sounding like whistling. KARGYRAA has a deep growling sound to it and is related to Tibetan chant.

33 OVERTONE (HARMONIC) SINGING How do you do it? With some difficulty! One way to strengthen the second resonance, at the expense of the others, is to make a small mouth opening and also a relatively tight constriction between the tongue and the roof of the mouth. But mainly it takes a lot of practice, using feedback. DAVID HYKES HAS POPULARIZED OVERTONE SINGING IN THE USA WITH HIS PROFESSIONAL “HARMONIC CHOIR.” AND THE HARMONIC PRESENCE FOUNDATION HIS WEBSITE http://www.myspace.com/davidhykes IS HIGHLY RECOMMENDEDhttp://www.myspace.com/davidhykes

36 BELTING IN POPULAR SINGING Belting is a manner of loud singing that is characterized by consistent use of the “chest” (modal register (>50% closed phase of the glottis) in a range in which larynx elevation is necessary to match the 1 st formant with the 2 nd harmonic in open (high F1) vowels (~G4 to D5 in female voices). The higher formant frequencies of the chest register articulation, characteristic of more “open” singing are closer to average speech values than those of the more “covered” sound of classical articulation. 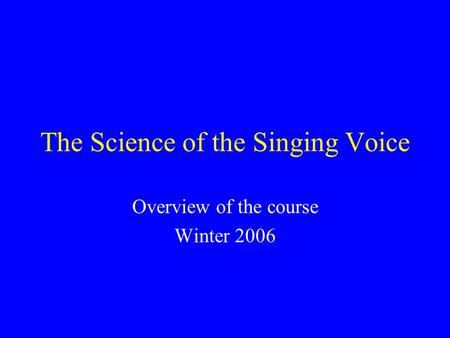 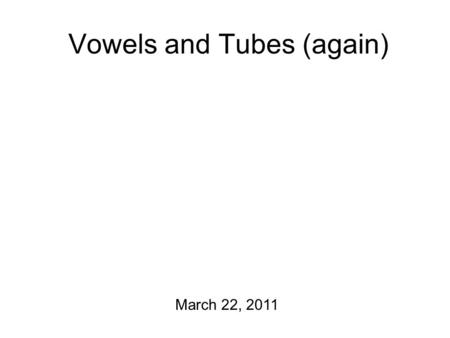 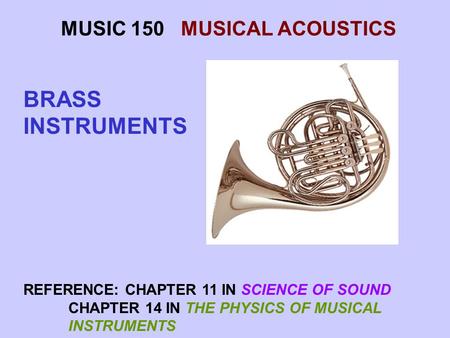 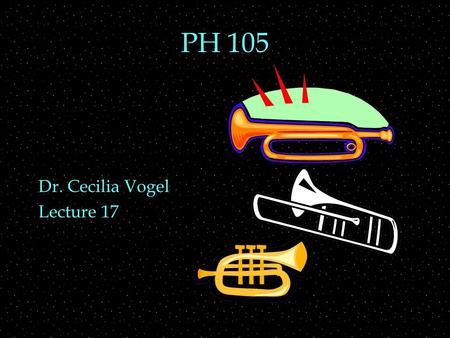 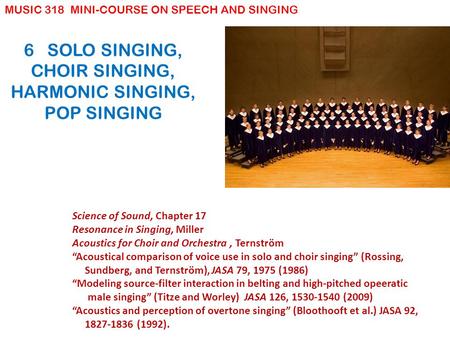 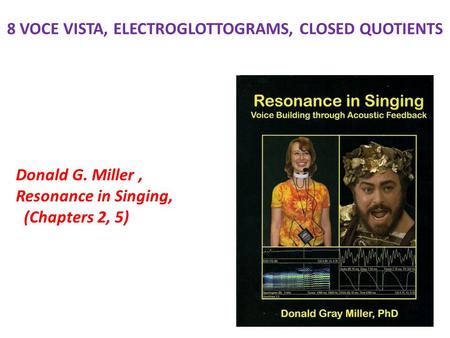 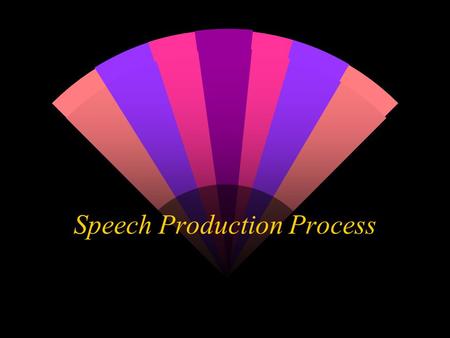 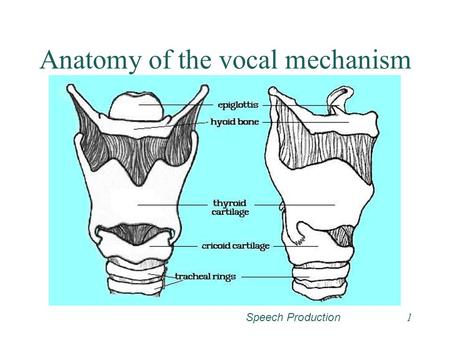 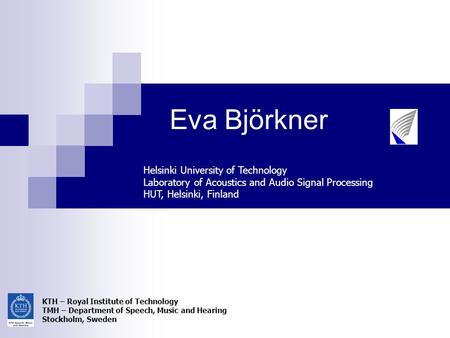 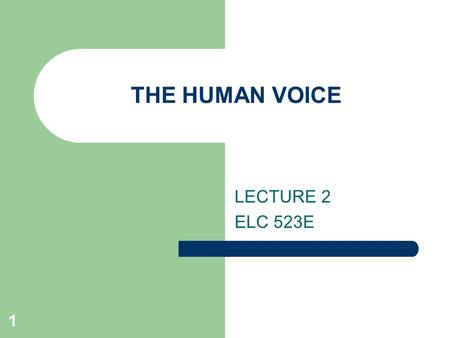