1 Question #7 If the President and Congress disagree over a tax bill, the President can veto the bill. Which of these applies to a presidential veto? A. Checks and Balances B. Judicial review C. Representative democracy D. Federalism

2 Question #8 A man on trial for committing a crime was not allowed to have witnesses testify on his behalf. Which of these principles was violated? A. Due process B. Judicial review C.Checks and balances D. Separation of powers

3 Question #9 Which of these describes the main purpose of an interest group? A. To influence government on specific issues B. To form legislative committees that study public policy C. To regulate the economy by setting federal lending rates D.To select cases for hearing in appeals courts

5 Types of Crimes Most crimes committed in the US break state laws; each state has its own penal code (laws that spell out crimes and punishments) Crimes may be petty offenses, misdemeanors or felonies Petty offenses are minor, like illegal parking; misdemeanors are more serious crimes like vandalism; felonies are serious criminal acts like murder, robbery or kidnapping

7 Steps in Criminal Cases
The prosecutor, or government lawyer responsible for brining criminal charge, must prove beyond a reasonable doubt to a judge or jury that the defendant violated the law Criminal cases begin when police gather enough evidence to convince a judge to issue an arrest warrant The arrested person is taken to a police station, the charges are recorded, and the suspect may be fingerprinted and photographed

8 Steps in Criminal Cases II
The arrested person is brought before a judge as quickly as possible to be formally charged with a crime (if the case is a misdemeanor, the person may please guilty or not guilty) Cases may then go to a grand jury which determines whether there is enough evidence to put the accused person on trial, or to a preliminary hearing before a judge for the same purpose At this point, about 90% of criminal cases end in a guilty plea in which the accused pleads guilty to a lesser crime in return for the government’s not prosecuting the more serious original crime (plea bargaining) After a grand jury indictment or preliminary hearing, a judge reads the formal charge at an arraignment held in an open courtroom; the defendant may plead not guilty, not guilty by reason of insanity, guilty or no contest In felony cases, the defendant may choose between a jury trial and a bench trial heard by a judge

9 Steps in Criminal Cases III
Jurors listen as witnesses are called and the evidence in presented In jury trials, the presiding judge instructs the jury on proper legal procedures and explains the law. The jury goes to a jury room to review the evidence and reach a decision. To reach a guilty verdict, the jury must find the evidence convincing beyond a reasonable doubt If the jury’s verdict is not guilty, the defendant is released immediately. If the jury’s verdict is guilty, the judge usually determines the sentence.

Download ppt "Question #7 If the President and Congress disagree over a tax bill, the President can veto the bill. Which of these applies to a presidential veto? A." 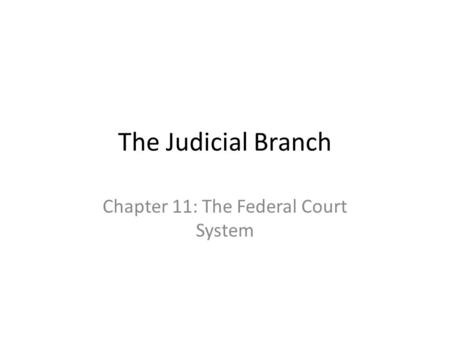