2 Kahn & Gorry's Time Specialist (Kahn & Gorry 1977) Knowledgable about time — a domain-independent module Isolates the temporal-reasoning element — not a temporal logic Specializes in organizing temporal aspects of knowledge Uses three different organization schemes, controlled by the user: - organizing by dates on a date line - organizing by special reference events (e.g., birth, now) - organizing by before/after chains, for an event sequence Maintains consistency of the data base Answers questions of the type "what," "when," using a fetcher

4 The Situation Calculus (McCarthy 1957; McCarthy and Hayes, 1969) Represents actions and their effects on the world The world is represented as a set of states Actions are functions that map states to states:  s True(s, closed_door)  True(Result (open, s), Open_Door) On(Block1, Block2) is not a predicate; On is a function that returns all states in which Block1 is on Block2; thus, True(s,Open_Door) means that s is a member of the set of states in which the door is open Used for multiple tasks, especially planning Major problems: –Concurrent actions cannot be represented –No duration of actions or delayed effects (Open creates result immediately) –Other problems that are not specific to the situation calculus

5 Hayes’ Histories (1985) A history is an entity that incorporates time and space An object O in a situation s, represented as O@S, is the intersection of the situation with the object’s history Permanent locations are bound spatially, but are restricted temporally Situations are unbound spatially, but are limited temporally by surrounding events Most objects are between these two extremes Events are instantaneous Episodes have a duration => The history of an object can be described over time

6 Qualitative Physics Introduced by Hayes in his Naïve Physics Manifesto (1978, 1985), in which he argued for formalizing and axiomatizing a sizable portion of the real world (also known as commonsense reasoning) Taken up by the Qualitative Physics (QP) branch of the Artificial Intelligence research community –Circuits were described as components and connections (De Kleer and Brown, 1985) –Qualitative Process Theory reasoned about active processes such as boiling water (Forbus 1984) –A general qualitative simulation framework (QSIM) was developed and implemented in software (Kuipers, 1986) –A methodology was developed to describe and detect cycles in repeating processes (Weld, 1986)

7 Time in Qualitative Physics QP approaches usually have no explicit representation of time –Instead, they refer to a set of key states (landmarks) and a transition function that changes a state into another state Typically, even when time is modeled, it is used only implicitly –Time is often an independent variable in qualitative equations, rather than a first-class citizen with its own properties

8 Kowalsky & Sergot's Event Calculus (1986) Developed for updating databases and for narrative understanding Based on the notion of an event and its descriptions (relationships) Relationships are ultimately over time points after(e) = the period of time started by event e Udates can only add; deletions add new information about the end of the period of time over which the old relationship holds Uses nonmonotonic, default reasoning since relations change as new information arrives (a new event can signal the end of an old one) Allows partial description of events, using semantic cases Defined and interpreted as Horn clauses in Prolog: Assigned-to(Person, Project, after(Event)) IF employed-on (Person, Project, Event)

9 Allen's Temporal Logic (1981–84) Intended to support natural-language understanding and planning Time primitives are temporal intervals - no instantaneous events No branching into the future or the past 13 basic (binary) interval relations [b,a,eq,o,oi,s,si,f,fi,d,di,m,mi], such as Before and After; six are inverses of the other six Supported by a transitivity table that defined the conjunction of any two relations and a sound but incomplete algorithm that propagates efficiently (in O(n 3 )) the results of applying the relations All 13 relations can be expressed using meet [Allen & Hayes 85]; Before (X, Y)   Z, (meets(X, Z)  (meets (Z, Y)) XZY

12 McDermott's Temporal Logic (1982) Goals: to model causality, continuous change and planning Time primitives are points Time is continuous — the time line is the set of real numbers States S i are instantaneous shots of the world with an order-preserving date function that maps them into time points A fact such as (On A B) is the set of states where A is on B, and are represented as (T s p) (the proposition p is true in state s; or: s is a member of the set of states in which p is true) An event e is the set of intervals (pairs of states) during which it happens, and is represented as (Occur S 1 S 2 e)

13 McDermott’s Chronicles States are partially ordered and branching into the future, but totally ordered in the past (known past, indeterminate future) Each maximal linear path in the state tree is a chronicle A chronicle is a complete history of the world, a totally ordered set of states, extending to the indefinite past and future

14 Shoham's Temporal Logic (1987) Time primitives are points Propositions are interpreted over intervals Reified first-order logic: TRUE(t 1, t 2, color(house17, red)), - rejects the simple FOL approach: color( t 1, t 2, house17, red) which does not grant time any special status - rejects the modal approach: M,  t 1, t 2,  color(house17, red) which can be subsumed by reified FOL Provides clear semantics to a temporal formalism, without any of the particular commitments made by Allen or McDermott (such as by distinguishing facts from events) 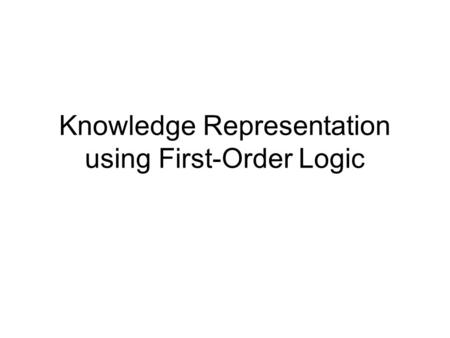 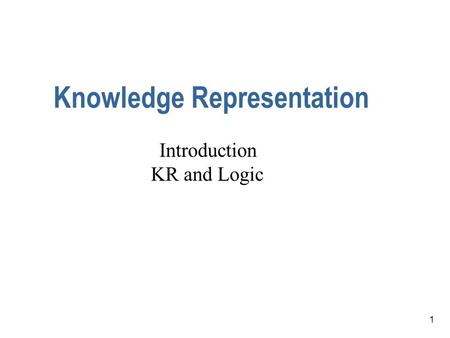 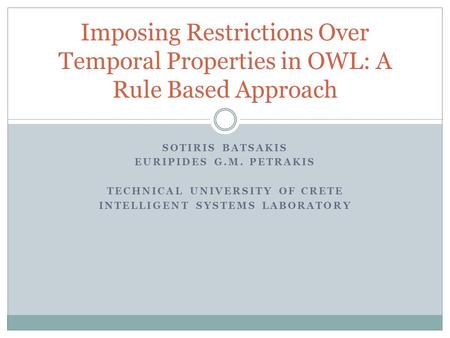 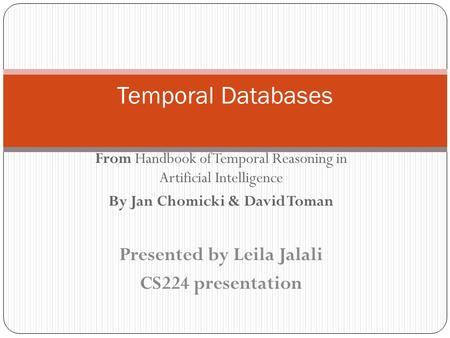 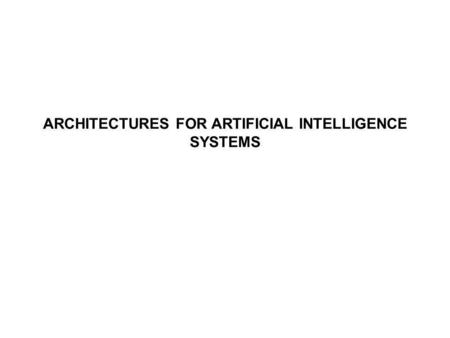 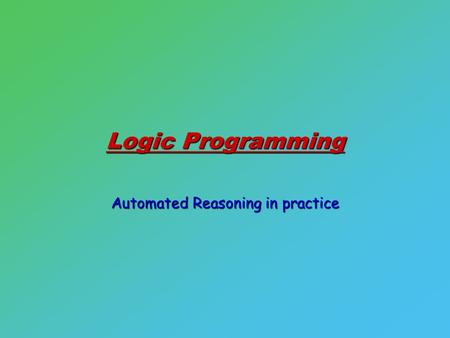 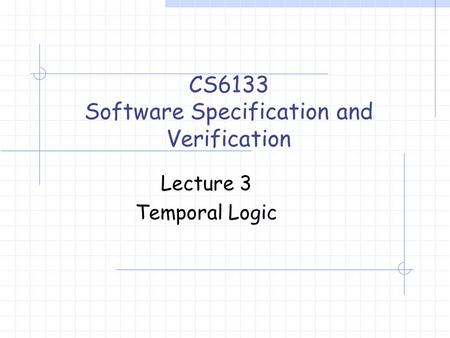 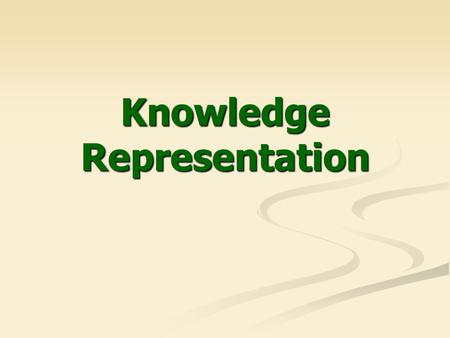 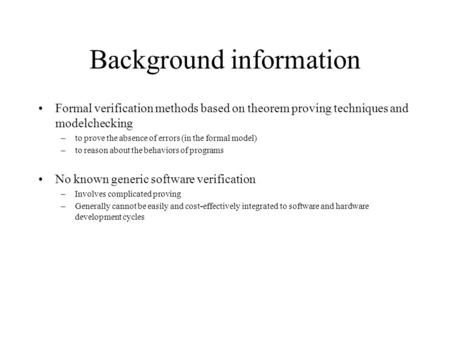 Background information Formal verification methods based on theorem proving techniques and model­checking –to prove the absence of errors (in the formal. 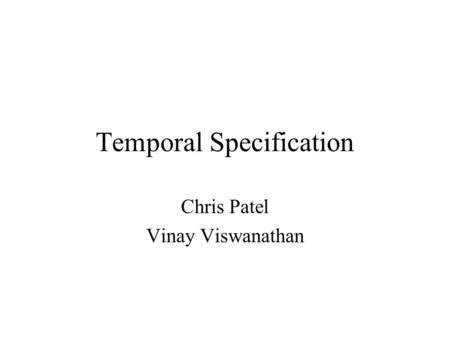 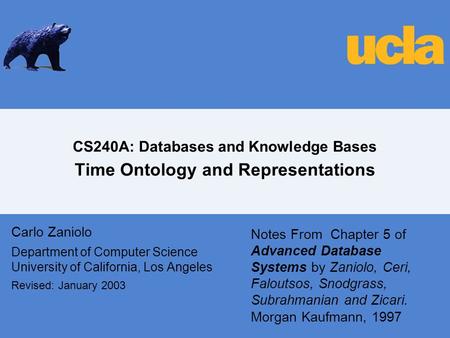 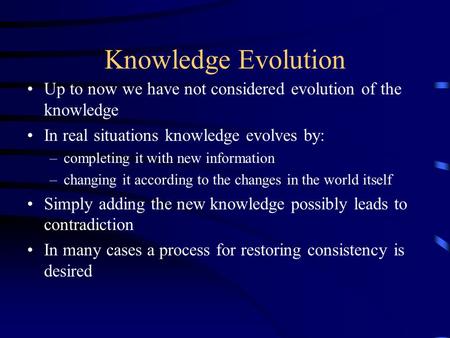 Knowledge Evolution Up to now we have not considered evolution of the knowledge In real situations knowledge evolves by: –completing it with new information. 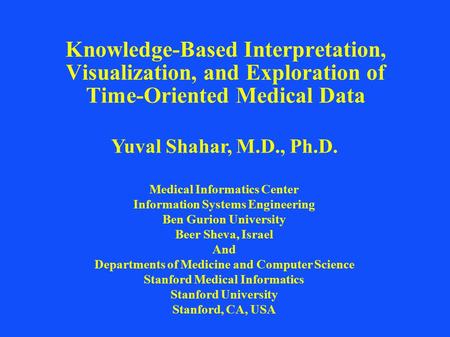 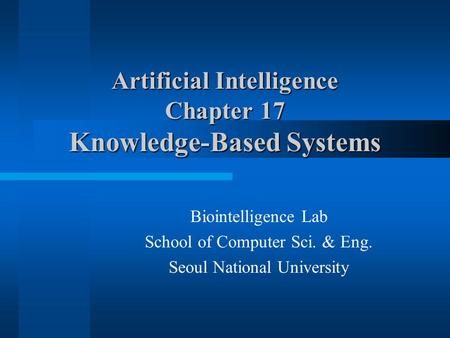 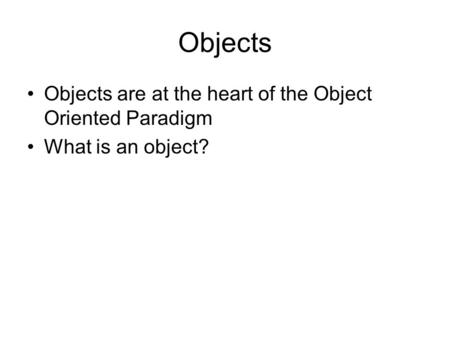 Objects Objects are at the heart of the Object Oriented Paradigm What is an object? 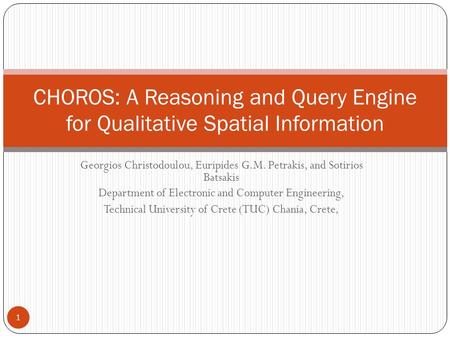 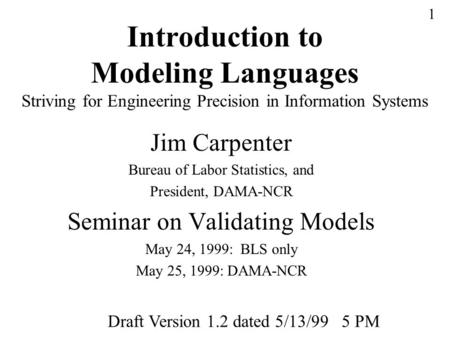