Presentation on theme: "DEPARTMENT OF SOCIAL POLICY AND INTERVENTION May 15, 2015 Who Adjusts? The Economic Crisis and Labour Market Outsiders."— Presentation transcript:

1 DEPARTMENT OF SOCIAL POLICY AND INTERVENTION May 15, 2015 Who Adjusts? The Economic Crisis and Labour Market Outsiders

2 Evidence from the crisis Labour market outsiders have been most affected in terms of unemploy- ment: the young, those with low skills, immigrants (EC 2010; OECD 2013). Possible explanations: More likely to be fired:  It is easy not to renew temporary contracts and temporary agency work have small or no firing costs.  And firing costs are lower for new hires on permanent contracts due to accumulation of severance payments. More likely to work in low-productivity sectors that are more adversely affected by demand shocks (e.g. construction sector in Spain).

7 Policy response: LM regulation  Reregulation of temporary employment in some countries, such as Spain, but also deregulation in e.g. Italy, Lithuania, Slovenia. Overall, not a strong trend in either direction.  Strong move toward decentralization of wage bargaining in bailout countries and through the Euro Plus Pact.

8 Policy response: unemployment benefits  Some countries have made it easier to qualify for benefit (Finland, France, Portugal, Latvia and Slovenia) and have extended duration (Spain, Finland, Romania, Latvia, Lithuania) – (Leschke 2012).  Some countries have decreased benefit duration (Ireland, Denmark, France, Czech Republic, Poland) – (Leschke 2012).  On average the coverage of UB have decreased for young people during the crisis (disclaimer: bad data on coverage).  And, austerity measures in the latter part of the crisis, e.g. in Germany and the UK.

11 Some positive developments New policy direction?  Ease of qualification requirements in some countries  Increase duration of benefits (most however in the first years of the crisis) shows understanding of cyclical unemployment.  Some reregulation of temporary employment. New thinking?  The EU 2020 has put social security coverage for non-standard workers on the agenda.  OECD WP recommends extending coverage for the young.  Deregulation of EPL for temporary employment has a negative effect on employment (OECD 2012, Going for Growth)

12 Some negative developments  The return to austerity measures  Decentralization of wage bargaining  Fiscal pressure. In the Social Investment Package, civil society is argued to have to take a bigger role. This will not work as a substitute to social insurance, e.g. union-run private unemployment insurance in Sweden.  Overall, a stronger focus on structural unemployment, than on casual and cyclical.

Download ppt "DEPARTMENT OF SOCIAL POLICY AND INTERVENTION May 15, 2015 Who Adjusts? The Economic Crisis and Labour Market Outsiders." 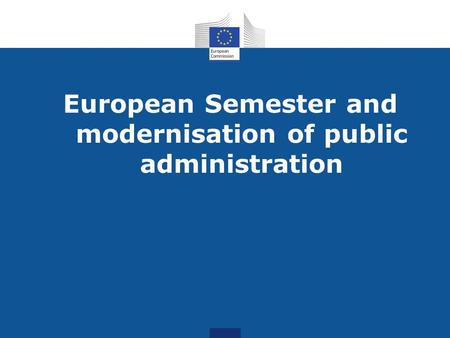 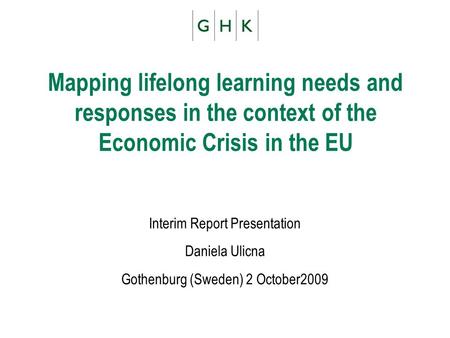 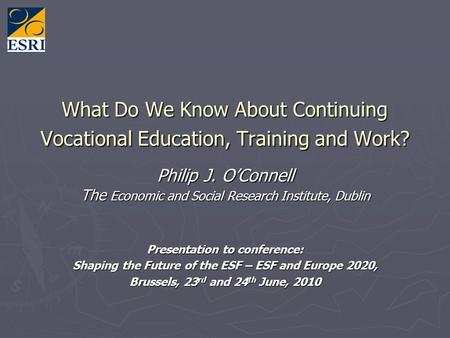 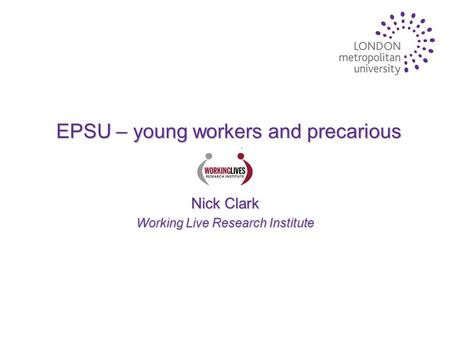 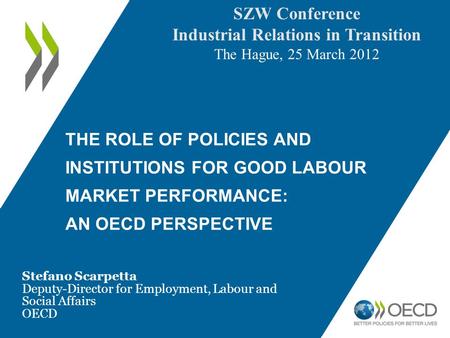 THE ROLE OF POLICIES AND INSTITUTIONS FOR GOOD LABOUR MARKET PERFORMANCE: AN OECD PERSPECTIVE Stefano Scarpetta Deputy-Director for Employment, Labour. 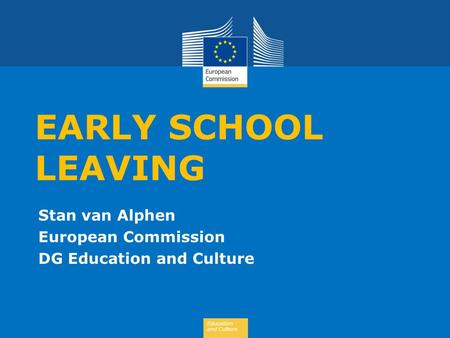 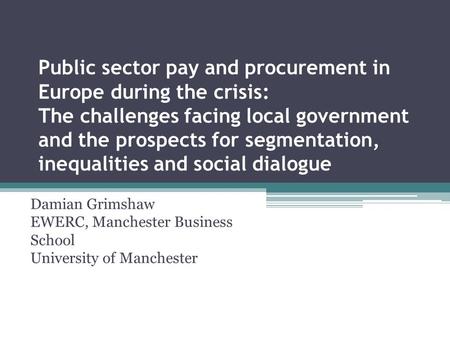 Public sector pay and procurement in Europe during the crisis: The challenges facing local government and the prospects for segmentation, inequalities. 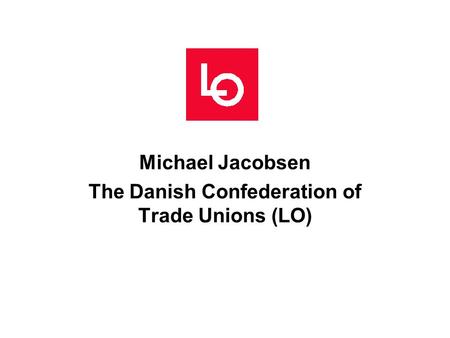 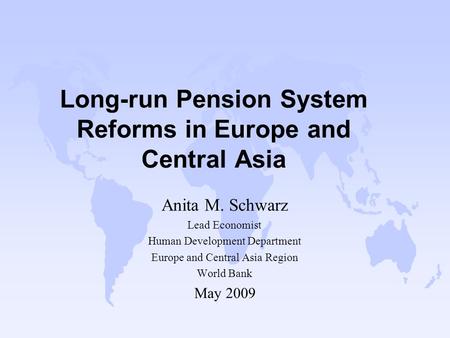 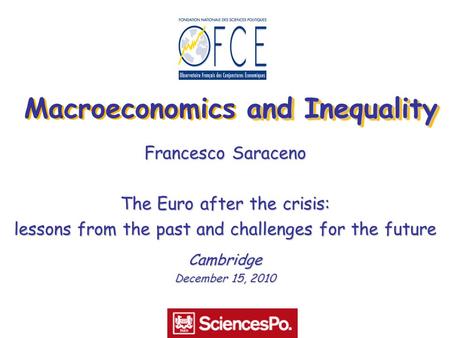 And Inequality Macroeconomics and Inequality Francesco Saraceno The Euro after the crisis: lessons from the past and challenges for the future Cambridge. 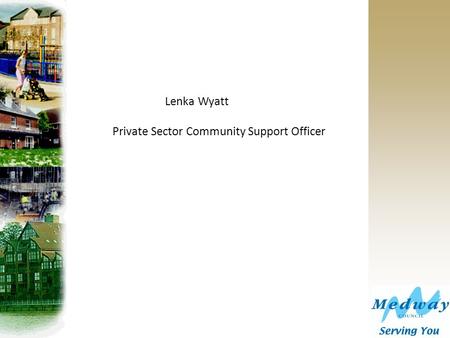 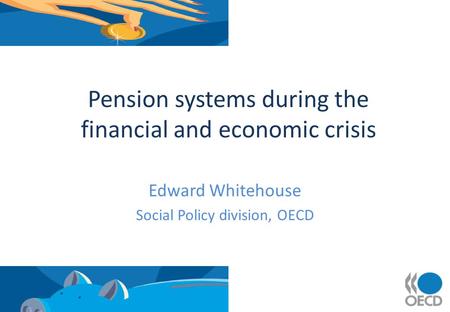 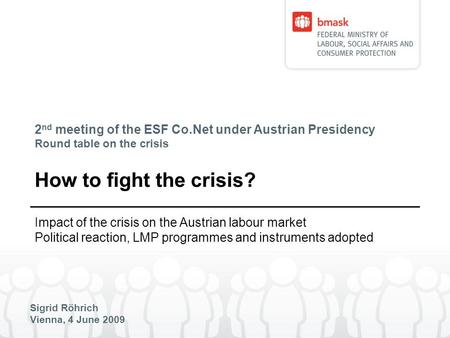 2 nd meeting of the ESF Co.Net under Austrian Presidency Round table on the crisis Sigrid Röhrich Vienna, 4 June 2009 How to fight the crisis? Impact of. 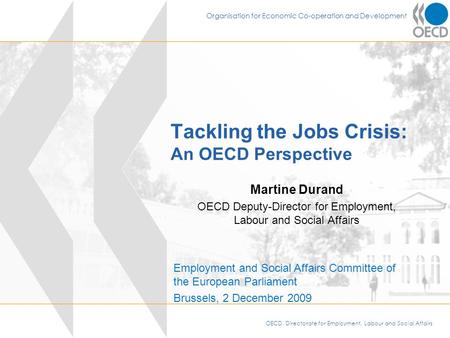 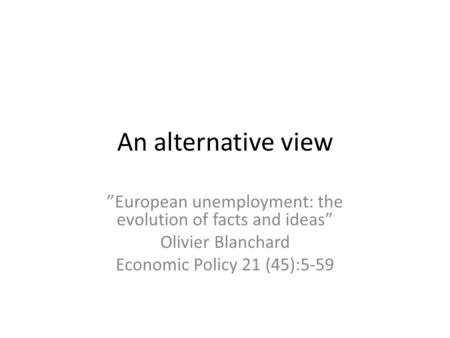 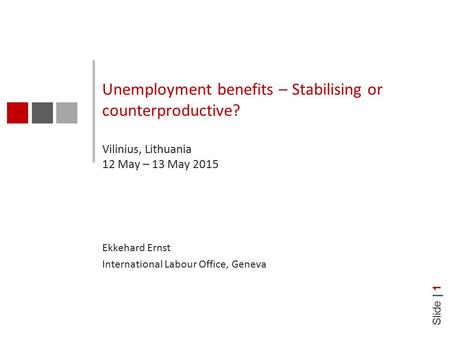