1 Psychoanalytic Criticism Sigmund Freud Interpretation of Dreams (1901) Tripartite structure of the human mind: Ego/Id/Superego Ego: Conscious self, “I” Id: Realm of desire, unconscious Superego: Conscience, the external gaze of the other/culture Development of the human mind throughout childhood (Oedipus, Electra complex, etc) How “the mind reworks repressed urges into acceptable forms” (Ryan 94) The unconscious (sexuality, death, trauma) Talk therapy—language as route to unconscious, where repressed material can attain expression Repression, anxiety, fear—sublimated into language, and thence into culture, through processes of displacement (metonymy) and substitution (metaphor) “Symptoms”—signs of an unconscious conflict; often seen in repetition (OCD, for example) “[T]he conscious mind often performed significant transformations on unconscious material that meant its final expressed form little resembled the unconscious urge or conflict that inspired it” (Ryan 95). Other transformations/defenses: intellectualization, rationalization, projection, etc… Object relations theory: Theory about how people “relate to the world around them” (Ryan 96)

2 Psychoanalytic Criticism Melanie Klein Love, Guilt, Reparation (1937) Object relations theory: Theory about how people “relate to the world around them” (Ryan 96) “The physical and social world around the self is its ‘object world.’ As the child emerges from its primary, close relation to its parents, it must develop a separate sense of self, and it does that by learning to distinguish between self and other, self and objects” (Ryan 96). Boundaries and their formation (separation of self/other) Representation is important for the process of self-formation; our ability to “make images of the world” (Ryan 97) If separation—boundary formation—is fraught with anxiety, then representation of that process of self-formation is similarly fraught with anxiety. Introjection: the process of taking inside oneself a part of the other, the not-self, as fantasy Projection: internal fantasies are outered, projected onto the world and its objects We are split beings

3 Psychoanalytic Criticism Jacques Lacan “On the Mirror Stage as Formative of the I” (1936) “The Function and Field of Speech in Psychoanalysis” (1949) A linguistic account of the mind: the human mind is structured like a language Freud’s concepts of displacement and substitution are linguistic processes The Imaginary: pre-self-conscious sense of wholeness, an imaginary wholeness (no distinction between self and other, I am Mother) Must break into the Symbolic realm: Characterized by language and the Law (of the Father)

5 How to Read a Text using Psychoanalysis The job of the psychoanalytical critic is to see which concepts are operating in the text that will yield a meaningful psychoanalytic interpretation. For example, you might focus on: the work’s representation of family dynamics (relation to the mother, the father, etc) what work tells us about human beings’ psychological relationship to death or sexuality how the narrator’s unconscious problems keep appearing over the course of the story, and the way the repetition/symptoms of the conflict changes the formation of the self and the development of boundaries (self/other) the way a text uses techniques of substitution and displacement to help you understand the human mind

6 An important thing to keep in mind: To some extent, all creative works are a product of the author’s conscious and/or unconscious mind. Any human production that involves images, that seems to have narrative content, or relates for the psychology of those who produce or use it can be interpreted using psychoanalytic tools

7 Some Questions Psychoanalytic Critics Ask about Literary Texts What unconscious motives are operating in the main characters? What is being repressed? Remember that the unconscious mind consists of repressed wounds, fears, unresolved conflicts, and guilty desires Is it possible to relate a character’s patterns of adult behavior to early experiences in the family (as represented in the story)? What do these behavior patterns and family dynamics reveal?

8 Some Questions Psychoanalytic Critics Ask about Literary Texts How can characters’ behavior, narrative events, and/or images be explained in terms of regression, projection, fear of or fascination with death or sexuality? What images or symbols are substituted for what unconscious repressed, and how? What kind of ordering principle (Symbolic, law of the Father) shapes the Imaginary into recognition? What gets lost, repressed?

9 Some Questions Psychoanalytic Critics Ask about Literary Texts In what ways can we view a literary work as a dream? How might recurrent or striking dream symbols reveal the ways in which the narrator/author is projecting his unconscious desires, fears, wounds, or unresolved conflicts onto other characters or the events portrayed? Look for symbols relevant to death and sexuality

10 Some Questions Psychoanalytic Critics Ask about Literary Texts What might a given interpretation of a literary work suggest about the psychological motives of the reader? How does the reader participate in the Symbolic order? 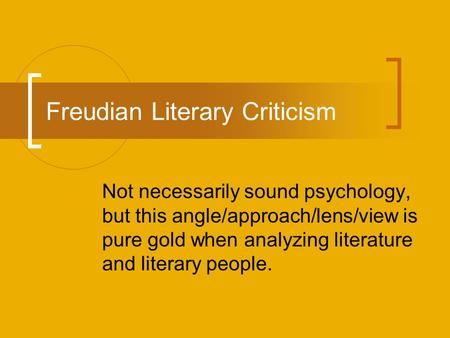 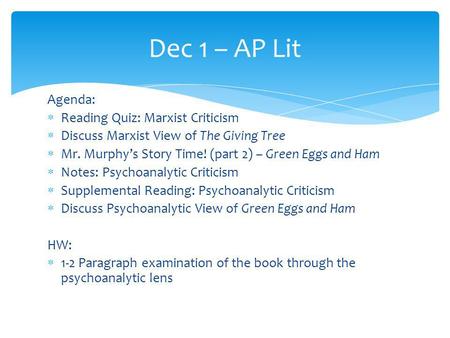 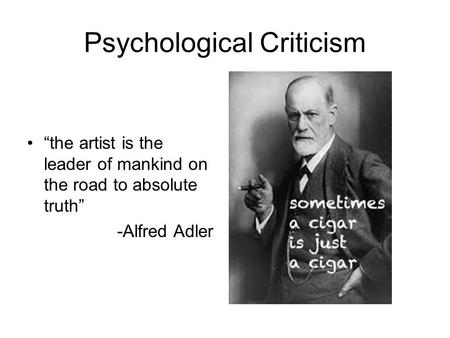 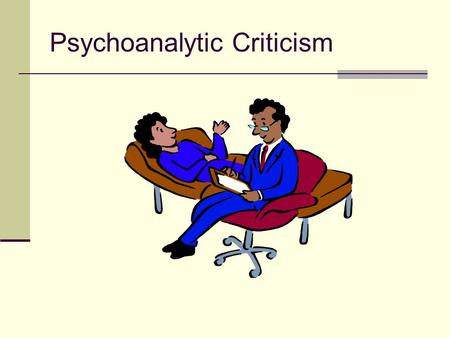 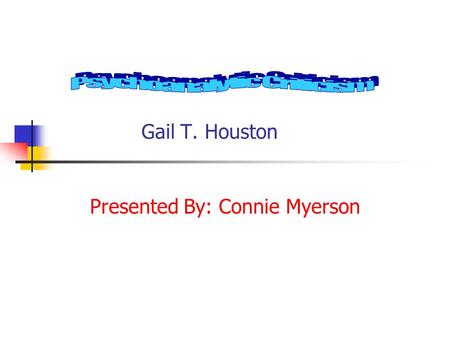 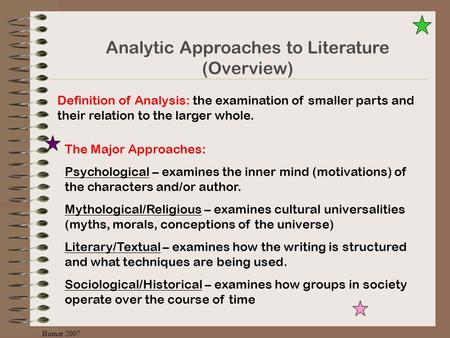 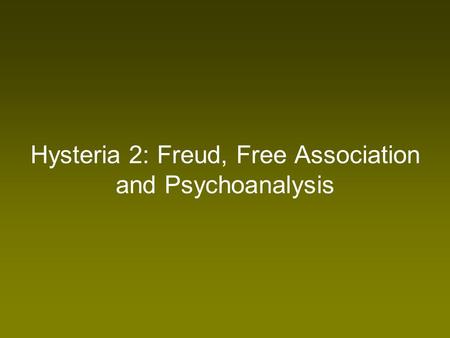 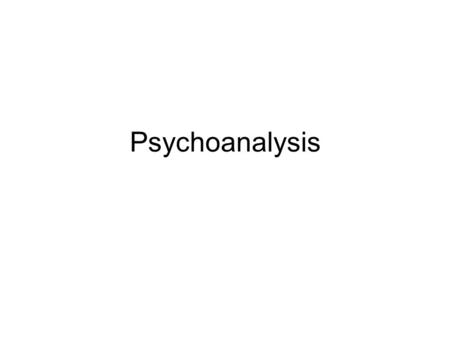 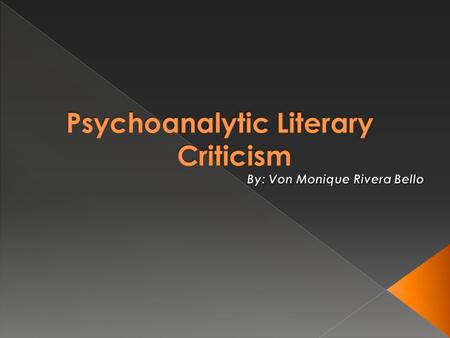 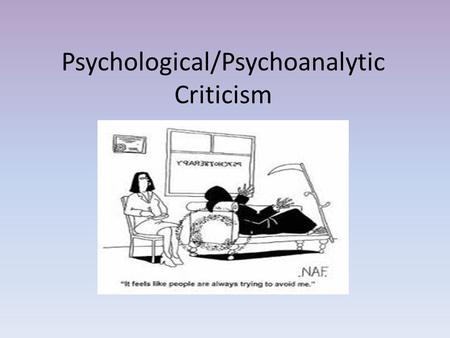 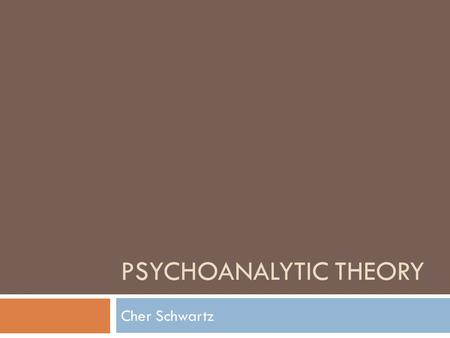 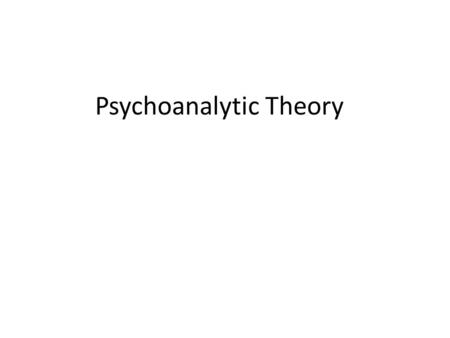 Psychoanalytic Theory. One of the prominent theories in Psychoanalysis. A radical new perspective in psychology. It is mostly credited to the works of. 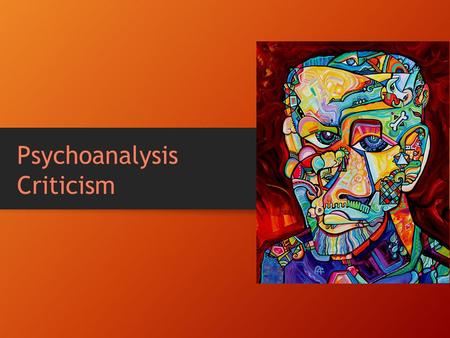 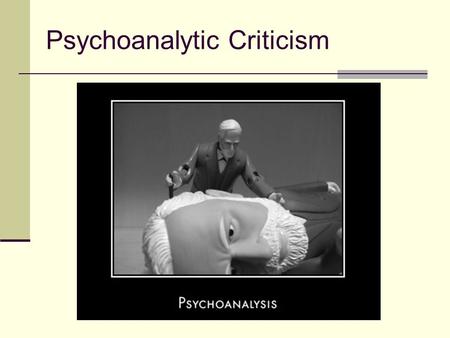 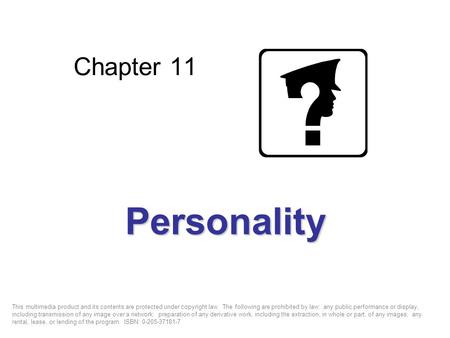 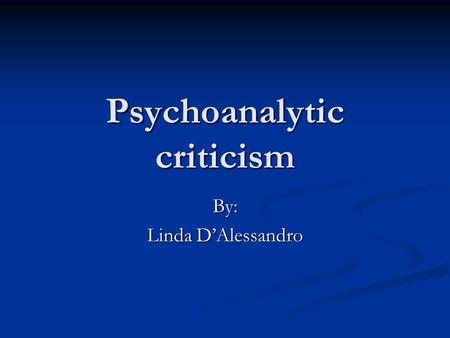