2 27 Light Light is energy that is emitted by accelerating electric charges—often electrons in atoms. This energy travels in a wave that is partly electric and partly magnetic. Such a wave is an electromagnetic wave. 27.3 Electromagnetic Waves

6 27 Light Light passes through materials whose atoms absorb the energy and immediately reemit it as light. 27.4 Light and Transparent Materials

7 27 Light Light is energy carried in an electromagnetic wave, generated by vibrating electric charges. When light strikes matter, electrons in the matter are forced into vibration. 27.4 Light and Transparent Materials

9 27 Light Exactly how a material responds to light depends on the frequency of light and the natural frequency of electrons in the material. Visible light vibrates at a very high rate, more than 100 trillion times per second (10 14 hertz). To respond to these ultrafast vibrations, a particle must have very little inertia. Electrons, with their small mass, can vibrate this fast. 27.4 Light and Transparent Materials

11 27 Light The electrons of atoms in glass can be imagined to be bound to the atomic nucleus as if connected by springs. 27.4 Light and Transparent Materials

12 27 Light Electrons in glass have a natural vibration frequency in the ultraviolet range. In ultraviolet light, resonance occurs as the wave builds a large vibration between the electron and the nucleus. The energy received by the atom can be either passed on to neighboring atoms by collisions or reemitted as light. If ultraviolet light interacts with an atom that has the same natural frequency, the vibration amplitude is unusually large. 27.4 Light and Transparent Materials

13 27 Light The atom typically holds on to this energy for about 1 million vibrations or 100 millionths of a second. During this time, the atom makes many collisions with other atoms and gives up its energy in the form of heat. That’s why glass is not transparent to ultraviolet. 27.4 Light and Transparent Materials

14 27 Light When the electromagnetic wave has a lower frequency than ultraviolet, as visible light does, the electrons are forced into vibration with smaller amplitudes. The atom holds the energy for less time, with less chance of collision with neighboring atoms. Less energy is transferred as heat. The energy of the vibrating electrons is reemitted as transmitted light. 27.4 Light and Transparent Materials

15 27 Light Glass is transparent to all the frequencies of visible light. The frequency of the reemitted light is identical to that of the light that produced the vibration to begin with. The main difference is a slight time delay between absorption and reemission. This time delay results in a lower average speed of light through a transparent material. 27.4 Light and Transparent Materials

16 27 Light A light wave incident upon a pane of glass sets up vibrations in the atoms. Because of the time delay between absorptions and reemissions, the average speed of light in glass is less than c. 27.4 Light and Transparent Materials

18 27 Light Infrared waves, with frequencies lower than visible light, vibrate not only the electrons, but also the entire structure of the glass. This vibration of the structure increases the internal energy of the glass and makes it warmer. Glass is transparent to visible light, but not to ultraviolet and infrared light. 27.4 Light and Transparent Materials

19 27 Light What kind of materials does light pass through? 27.4 Light and Transparent Materials

20 27 Light In opaque materials, any coordinated vibrations given by light to the atoms and molecules are turned into random kinetic energy—that is, into internal energy. 27.5 Opaque Materials

21 27 Light Materials that absorb light without reemission and thus allow no light through them are opaque. Wood, stone, and people are opaque. In opaque materials, any vibrations from light are turned into random kinetic energy—that is, into internal energy. The materials become slightly warmer. 27.5 Opaque Materials

22 27 Light Metals are also opaque. In metals, the outer electrons of atoms are not bound to any particular atom. When light shines on metal and sets these free electrons into vibration, their energy does not “spring” from atom to atom. It is reemitted as visible light. This reemitted light is seen as a reflection. That’s why metals are shiny. 27.5 Opaque Materials

24 27 Light think! Why is glass transparent to visible light but opaque to ultraviolet and infrared? 27.5 Opaque Materials

25 27 Light think! Why is glass transparent to visible light but opaque to ultraviolet and infrared? Answer: The natural frequency of vibration for electrons in glass matches the frequency of ultraviolet light, so resonance in the glass occurs when ultraviolet waves shine on it. These vibrations generate heat instead of wave reemission, so the glass is opaque to ultraviolet. In the range of visible light, the forced vibrations of electrons in the glass result in reemission of light, so the glass is transparent. Lower-frequency infrared causes entire atomic structures to resonate so heat is generated, and the glass is opaque. 27.5 Opaque Materials

26 27 Light Why does light not pass through opaque materials? 27.5 Opaque Materials

27 27 Light When light shines on an object, some of the rays may be stopped while others pass on in a straight- line path. 27.6 Shadows

28 27 Light A thin beam of light is often called a ray. Any beam of light—no matter how wide—can be thought of as made of a bundle of rays. A shadow is formed where light rays cannot reach. 27.6 Shadows

29 27 Light Sharp shadows are produced by a small light source nearby or by a larger source farther away. However, most shadows are somewhat blurry, with a dark part on the inside and a lighter part around the edges. A total shadow is called an umbra. A partial shadow is called a penumbra. A penumbra appears where some of the light is blocked but where other light fills in. 27.6 Shadows

32 27 Light a.An object held close to a wall casts a sharp shadow. b.As the object is moved farther away, penumbras are formed and cut down on the umbra. 27.6 Shadows

33 27 Light a.An object held close to a wall casts a sharp shadow. b.As the object is moved farther away, penumbras are formed and cut down on the umbra. c.When it is very far away, all the penumbras mix together into a big blur. 27.6 Shadows

34 27 Light A penumbra occurs when the moon passes between Earth and the sun— during a solar eclipse. The moon’s shadow barely reaches Earth. If you stand in the umbra shadow, you experience brief darkness during the day. If you stand in the penumbra, you experience a partial eclipse. The sunlight is dimmed, and the sun appears as a crescent. 27.6 Shadows

35 27 Light Earth, like most objects in sunlight, casts a shadow. This shadow extends into space, and sometimes the moon passes into it. When this happens, we have a lunar eclipse. A lunar eclipse can be seen by all observers on the nighttime half of Earth. 27.6 Shadows

36 27 Light Shadows also occur when light is bent in passing through a transparent material such as water. Light travels at slightly different speeds in warm and in cold water. The change in speed causes light to bend, just as layers of warm and cool air in the night sky bend starlight and cause twinkling. Some light gets deflected a bit and leaves darker places on the wall. The shapes of the shadows depend on how the light is bent. 27.6 Shadows

37 27 Light A heater at the tip of this submerged J-tube produces convection currents in the water. They are revealed by shadows cast by light that is deflected differently by the water of different temperatures. 27.6 Shadows 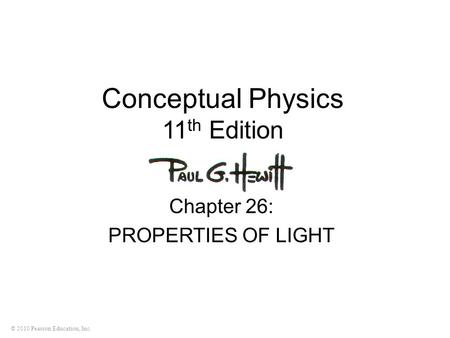 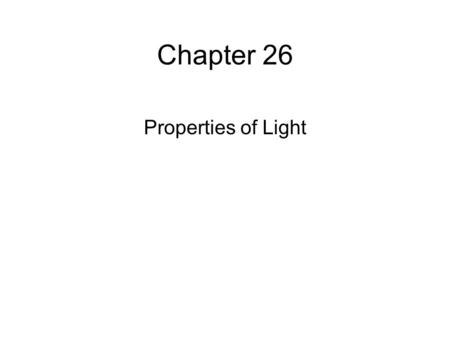 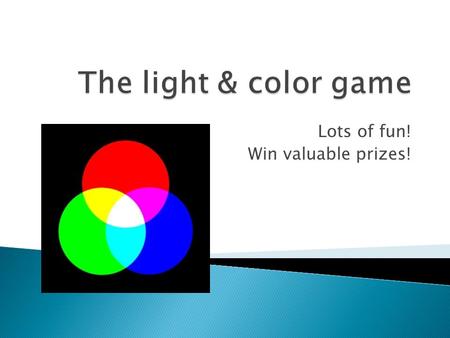 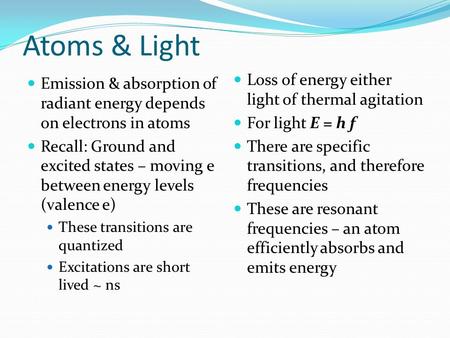 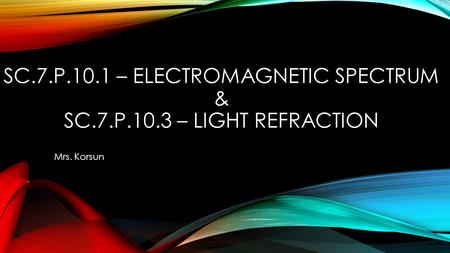 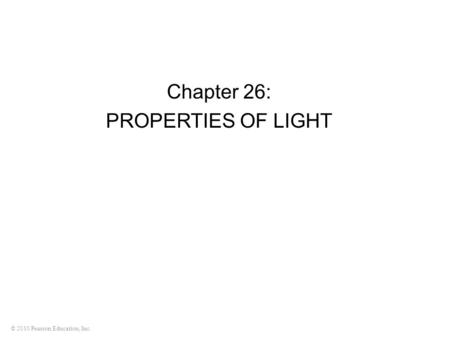 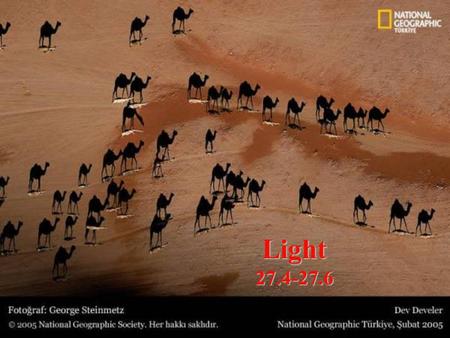 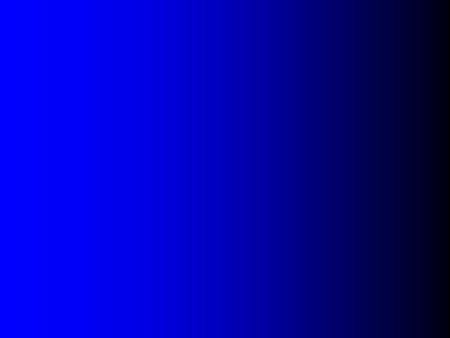 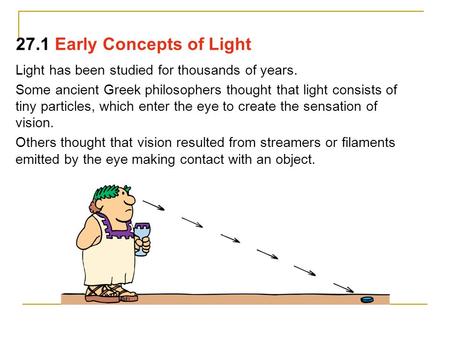 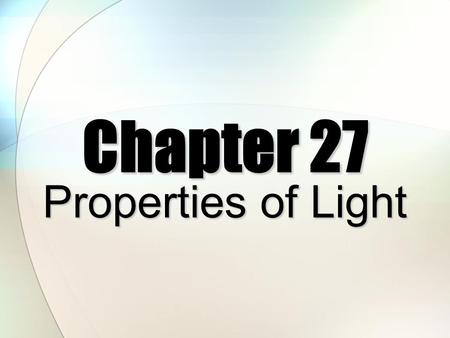 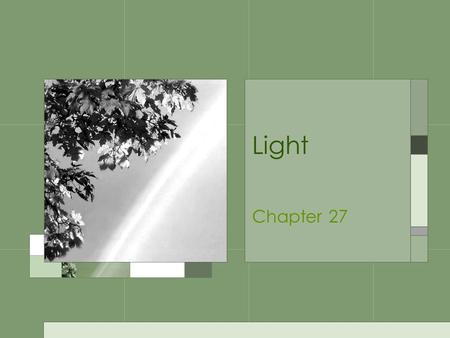 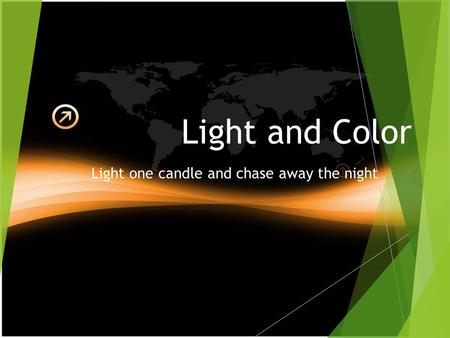 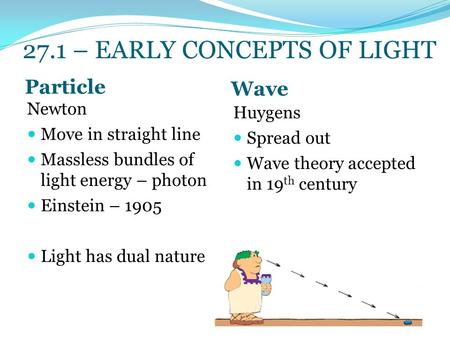