4  “Separate but equal” ruled unconstitutional in 1954  Brown v. Board of Education of Topeka  Declared the segregation of students into Black-only and White-only schools inherently unequal

6 A Change of Scenery

7 Into Harlem Many Black Americans found their way to Harlem, a neighborhood in New York City with a lively African- American population.

9 A Renaissance: 1920-1932  Renaissance  A revival in the world of art and learning  The New Negro Movement  Movement of Black Americans to northern cities  Emergence of radical thought  Set the stage for the creation of great literature and art in Harlem  Could now express their heritage  Could stand up for what they believed

10 A New Sound  From the four corners  Talented musicians came from all over the country  Their unique voices came together to form popular Black music  One of the most important contributions was the jazz sound from New Orleans  Jazz is uniquely American  And was created by African-Americans!

13 A Mixed Audience  Prohibition: 1920-1932  U.S. outlawed the manufacturing, transporting, and selling of alcoholic beverages  Speakeasy  An establishment used for selling alcohol during prohibition  Whites frequented the speakeasies in Harlem for entertainment and alcohol  They were entertained by Black performers  Performers gained celebrity in the White community

16 Slowed, Not Stopped  The Great Depression  1929  Put a damper on artistic development  Stalled the movement, but didn’t stop it  Still going…  Langston Hughes – rave reviews for his poetry  Zora Neal Hurston – big success with Their Eyes Were Watching God, 1937  After an early-30s slump, jazz came back and had its greatest popular success

17 Effects of the Harlem Renaissance  Established African-Americans in the artistic community  International acclaim  Artistic achievements by African-Americans were recognized across the country and around the world  Proved wrong Black stereotypes  Civil Rights organizations, such as the NAACP, emerged during this time  More than just literature, art, and music 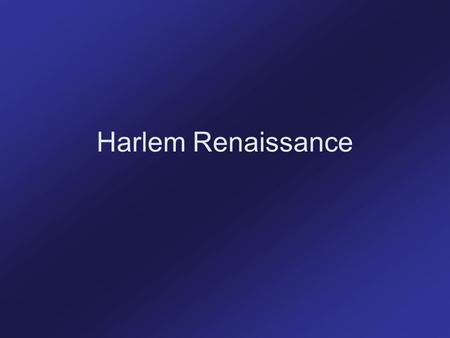 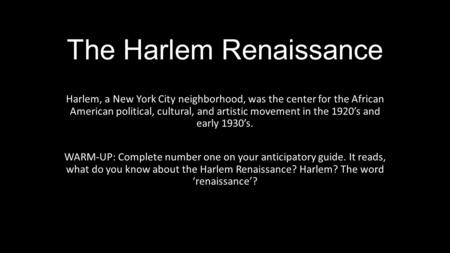