4 II. Examples of Absolute Monarchies
A. Then 1. The Reign of King Louis XIV of France 2. King George III of England

5 B. Now 1. Saudi Arabia a. The world’s leading producer of crude oil.
b. Present ruler is King Abdullah. c. Opposition to the king is not tolerated.

6 d. Citizens are not free to speak out against the government.
e. Citizens cannot take part in elections to choose public officials. f. All Saudi officials are appointed by the king, not elected by the people. King Abdullah of Saudi Arabia

9 IV. Dictatorships A. Dictatorship: A system ruled by a dictator possessing absolute power and absolute authority. B. A dictator usually takes power of a preexisting government by military force. C. This take-over is called a coup d’etat. D. Dictators usually appoint a police force that uses threats and actual force to stop anyone from saying anything against the dictatorship.

10 V. Examples of Dictators of the Past and Present
A. Adolf Hitler B. Saddam Hussein Nazi Germany Iraq

11 V. Cont. A. Dictatorships are dangerous. A dictator rules with unlimited power and therefore can get away with inhumane treatment of their citizens. B. Adolf Hitler was responsible for the mass slaughter (genocide) of 6 million Jewish people during WWII.

12 C. Human Rights Watch estimates that Saddam's campaign of terror against the Kurds killed at least 50,000 and possibly as many as 100,000 Kurds. The Iraqi regime used chemical agents to include mustard gas and nerve agents in attacks against at least 40 Kurdish villages between The largest was the attack on Halabja which resulted in approximately 5,000 deaths

13 D. North Korea Kim Jong Il of North Korea.
E. Kim Jong Il’s regime is very secretive and completely isolated from the rest of the world. F. He has been accused of supporting terrorism and in 2005 announced that North Korea had developed nuclear weapons.

14 VI. Theocracy A. Theocracy: A government controlled by religious leaders. B. A present day example of a theocracy is Iran. C. Iran is officially titled, The Islamic Republic of Iran HEOCRACY

15 VI. Theocracy Cont. D. All secular (nonreligious) laws passed in Iran are reviewed by a 12 member Council of Guardians. E. The Council is made up of six Muslim religious experts and six Muslim attorneys. F. All laws must be consistent with Islamic religious laws.

16 VII. Parliamentary Democracies
A. Democracy: a government where the power is vested in the citizens to make laws for their own society usually involving periodically held free elections. B. Power for a democracy is acquired through elections. C. Parliamentary Democracies: A body of representatives elected by the people of a nation to make laws. D. Once elected, the members of parliament elect a chief executive and cabinet to run the government.

17 E. France, India, Israel and Canada are examples of a Parliamentary Democracies.
F. Remember that Democracy means Freedom for its citizens. 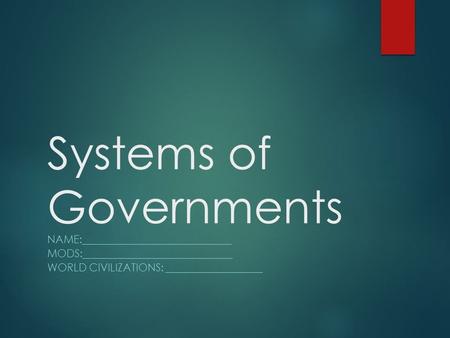 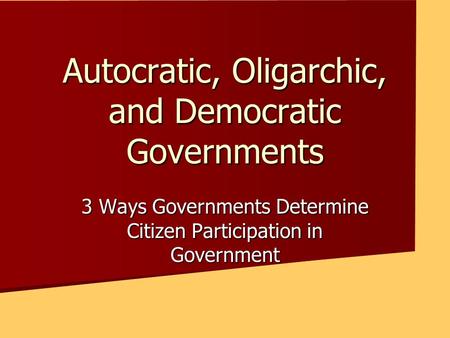