3 Refraction at a Spherical Surface Rays close to the axis (“paraxial”) will focus to an image inside the glass: From we can show that O C I P R airglass h dodo didi

4 The Lensmaker’s Formula ( optional derivation, if you’re curious) The formula also works in reverse. A ray coming from an object in the glass will satisfy For a convex lens with surfaces of radii R 1, R 2, the rays on going through R 1 will converge (inside the glass) towards a point d 1 such that. But those rays don’t get there—they first meet surface R 2, which focuses them in air to a point d i, say, these rays being from a virtual object at d 1, so the object distance is –d 1, the final image is at d i : Adding the boxed formulas gives:

5 The Lensmaker’s Formula This formula also works for plano convex lenses (one side flat, meaning R infinite) or if one or both sides are concave—but for concave sides, R must be taken negative. Note: sometimes this formula is written with a minus sign—in those books, the rule is that R is taken positive if its center of curvature over is to the right. It’s a matter of taste.

6 Image Location by Ray Tracing The rules we use for thin lenses: 1.We take the ray through the center of the lens to be undeflected and unshifted. 2.For a convex lens, rays passing through a focus on one side are parallel to the axis on the other side. 3.For a concave lens, rays coming in parallel on one side are deflected so they apparently come from the focal point on that same side.

7 f didi dodo hihi hoho d i - f A B F I O´ I´ O Ray Tracing for a Thin Convex Lens We choose the ray through the lens center, a straight line in our approximation, and the ray parallel to the axis, which must pass through the focus when deflected. They meet at the image. From the straight line through the center, from the line BFI´ (and similar triangles!), This gives immediately:

8 Convex Lens as Magnifying Glass The object is closer to the lens than the focal point F. To find the virtual image, we take one ray through the center (giving ) and one through the focus near the object ( ), again but now the (virtual) image distance is taken negative. f didi dodo hihi hoho f - d o hihi F

9 Definition of Magnifying Power M is defined as the ratio of the angular size of the image to the angular size of the object observed with the naked eye at the eye’s near point N, which is h o /N. If the image is at infinity (“relaxed eye”) the object is at f, the magnification is (h o /f )/(h o /N) = N/f. Maximum M is for image at N, then M = (N/f ) + 1. f didi dodo hihi hoho f - d o hihi F

10 Simple and Compound Microscopes The simple microscope is a single convex lens, of very short focal length. The optics are just those of the magnifying glass discussed above. The simplest compound microscope has two convex lenses: the first (objective) forms a real (inverted) image, the second (eyepiece) acts as a magnifying glass to examine that image. The total magnification is a product of the two: the eyepiece is N/f e, N = 25 cm (relaxed eye) the objective magnification depends on the distance between the two lenses, since the image it forms is in the focal plane of the eyepiece.

11 Diverging (Concave) Lens The same similar triangles arguments here give from which provided we now take both d i and f as negative!. f didi dodo hihi hoho f – d i F hoho

12 Formula Rules Updated… The formula is valid for any thin lens. For a converging lens, f is positive, for a diverging lens f is negative. The object distance d o is positive—unless, in a multi-lens system, the object is on the “wrong” side of the lens! (We’ll do an example.) The image distance d i is positive for a real image, negative for a virtual image.

13 1) It will magnify 2) Things will look smaller 3) Things will look the same size A “concave lens” is actually made of very thin glass, is hollow and filled with air. How will this lens behave at close quarters under water? Empty Lens

14 1) It will magnify 2) Things will look smaller 3) Things will look the same size A “concave lens” is actually made of very thin glass, is hollow and filled with air. How will this lens behave at close quarters under water? Empty Lens

15 Clicker Question I have two identical thin convex lenses of focal length f. If I put them together ()(), what is the focal length of the combination? A.2 f B. f C. f /2

17 Two Convex Lenses Separated Easy example: two lenses, same focal length f, separated by f, so rays through the center of one lens are parallel to the axis after (or before) passing through the other lens: B A object This would be the real image for lens A alone, it is the object for lens B. image f

18 Further Separated… If the first lens forms an image between the lenses, but less than the focal distance to the second lens, the combination produces a virtual image (this is the basic ray pattern for simple telescopes and microscopes): The ray shown purple is the one parallel to the axis between the lenses—so it passes through both foci outside the system This is the real image from the first lens This is the final virtual image: notice it’s upside down— that’s OK for astro telescopes.

19 Even More Separated… If the separation is sufficient that the image from the first lens A is outside the focal length of lens B, there is a final real upright image beyond the second lens: Notice the usefulness of the ray parallel to the axis between the lenses—it goes through the foci (white circles) outside. We first locate the image from lens A, then draw in the ray from it through the center of lens B A B

20 The Spyglass The real image from the two convex lenses can be viewed through a third, powerful, lens to make a telescope with upright image, better for terrestrial viewing (as opposed to astronomical uses).

21 Astronomical Telescope: Angular Magnification Any object in astronomy can be taken to be at infinite distance: the relevant image size parameter is the angular size of the image. Example: imagine pointing a telescope at Jupiter, so Jupiter’s south pole is on the axis of the telescope. Rays coming from Jupiter’s north pole can be taken to be parallel and at a small angle to the axis on entering the telescope, so they form an image in the focal plane… A B fAfA

22 Astronomical Telescope: Angular Magnification An “eyepiece” lens of shorter focal length is added, with the image from lens A in the focal plane of lens B as well, so viewing through B gives an image at infinity. Tracking the special ray that is parallel to the axis between the lenses (shown in white) the ratio of the angular size image/object, the magnification, is just the ratio of the focal lengths f A /f B. A B fAfA fAfA fBfB fBfB

23 Galilean Telescope The rays from the object lens are intercepted by a concave lens before they form an image. The concave lens is positioned so that the image would have been at its focus—so it forms a virtual image at infinity (from the lens formula). The angular magnification is again the ratio of focal lengths. fAfA fBfB fBfB

24 The Eye Most of the focusing takes place at the cornea, filled with watery stuff. The lens shape is adjusted by muscles to make finer adjustments to the focusing. 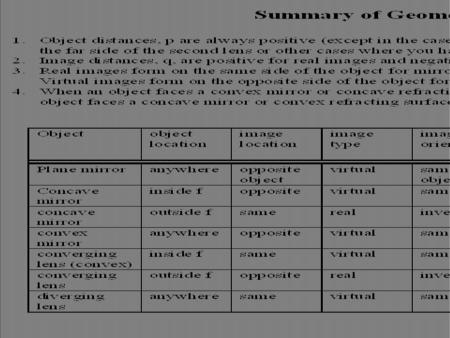 Flat mirror images Your eyes tell you where/how big an object is Mirrors and lenses can fool your eyes Place a point light source P in front of a mirror. 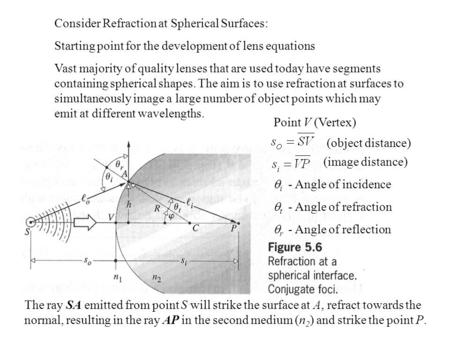 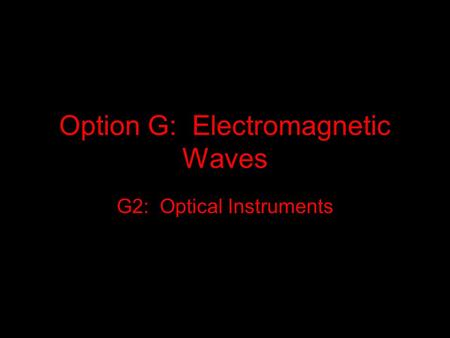 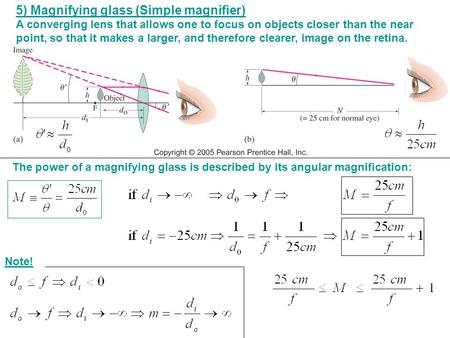 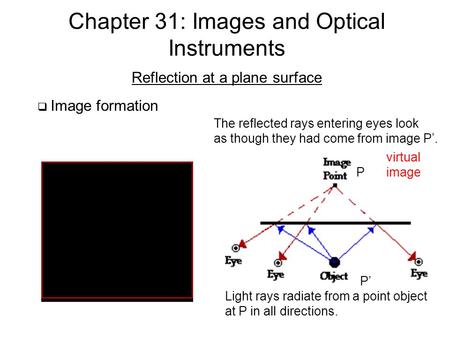 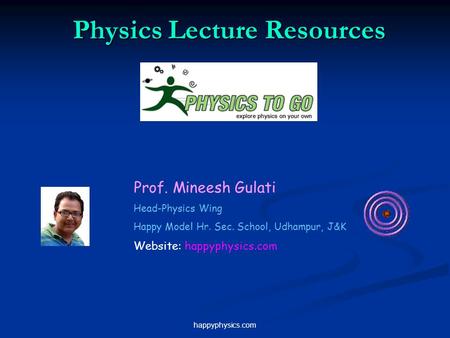 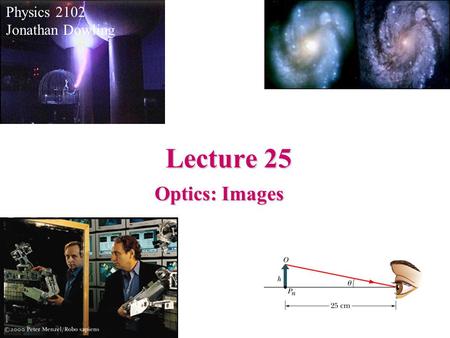 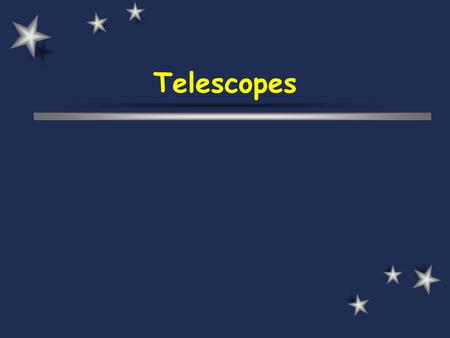 Telescopes. Introduction  A telescope is designed to form on the retina of the eye a larger image of an object than would be created if the object were. 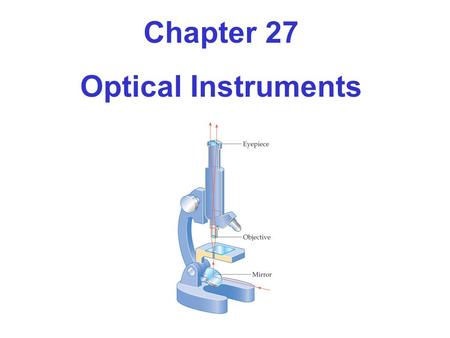 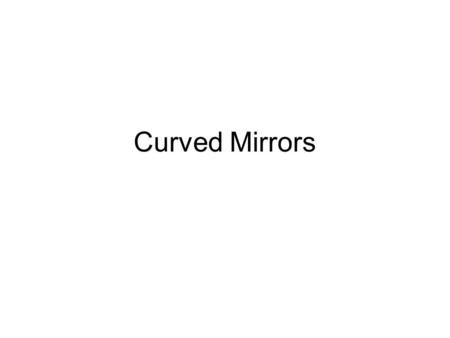 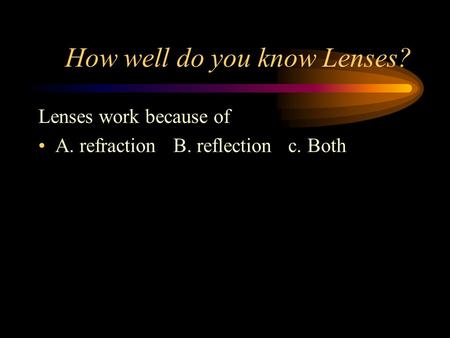 How well do you know Lenses? Lenses work because of A. refraction B. reflection c. Both. 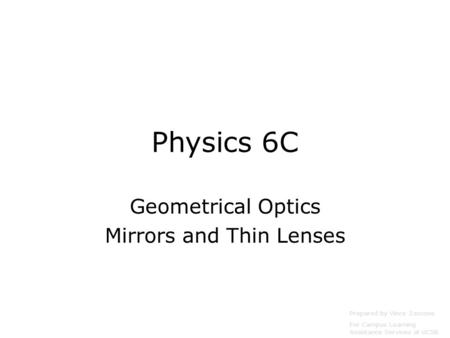 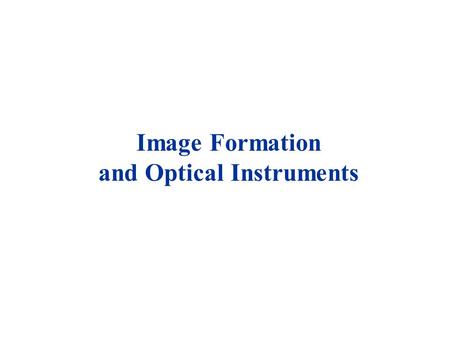