3 William's Reforms William believed that the country had plunged into a state of decadence with the death of Robert the Confessor and the subsequent yet short rule of Harold Godwinson. William would launch reforms to correct the issues England had been facing for quite sometime: Created an office of the treasury known as the exchequer Created the Domesday Book → massive census which meticulously detailed the possessions of each English citizen to improve taxation.

4 Henry I After the failed rule of William Rufus (William II), Henry I would take control of England. He would be known as the great legislator as he sought to reform the laws of England. He created two new legal precedents which would bring some control over the citizenry of England.

5 Henry's Legal Reforms Henry's legal reforms became the basis for English law for many centuries up until the establishment of Model Parliament in 1295. His reforms included: A system of traveling judges to oversee local affairs and reduce the need for kings as judges. A system of common law → legal system in which laws can be created that are based on the customs and unwritten rules of a specific territory.

6 The Anarchy (1135-1154) Henry had decided upon his death to leave his daughter, the Empress Matilda, control of England. His son Stephen, chose to cut off her inheritance and have the nobility of London name him king of England. This plunged England into a state of anarchy or lack of government control. England would remain unsettled until a deal was struck between Stephen and Henry II (son of Matilda)

7 Henry II Upon the death of Stephen, Henry II would come into power in England. He would take up the mantle set by his grandfather, Henry and become a strong legislator. This need for control led him into direct conflict with Thomas Becket, the Archbishop of Canterbury Henry II believed he had the right to fill church vacancies as king of England which Becket disputed. It would lead to an indirect order to kill Becket which would tarnish Henry II's legacy.

8 Richard I Upon the death of Henry I, Richard I (also known as the Lionheart) would become king of England. Richard I would be known as an absentee king since he was rarely in England and spent most of his time fighting in the Crusades. He would bankrupt England by being held ransom in Eastern Europe and would be killed in a riot upon his return.

9 King John Richard's death would bring on the reign of John in England. John would start problems with three different groups: The French, for his failed side dealings with Philip Augustus of France. The pope, for refusing his nominee for the archbishop of Canterbury The nobles, for the indemnity payments the Church placed on England for John's actions.

10 The Magna Carta As a result of the heavy taxation and frivolous laws that John created to solve his problems with the Church, the nobles forced John to limit his power or be deposed. He was forced to sign the Magna Carta which granted: No taxation without representation Due process of law Limitation of the king's power. Creation of Model Parliament

11 Hundred Years' War (1337-1453) Ongoing disputes over control of territory in France led to the Hundred Years' War between England and France. Joan of Arc would become a notable figure in the war as she helped raise the morale of the French troops and guided them to a victory to the 116 year war. France would regain many lost territories and the French king would regain the power he had once lost.

12 Results of the Hundred Years' War The Hundred Years' War proved to be an important milestone in European history for many reasons: It introduced new weapons such as the longbow and cannon, the latter being one of the chief reasons why many feudal conventions were done away with. On that note, feudal manors lose their importance as do massive fortifications due to the use of the cannon. A rivalry between France and England will pervade future centuries. 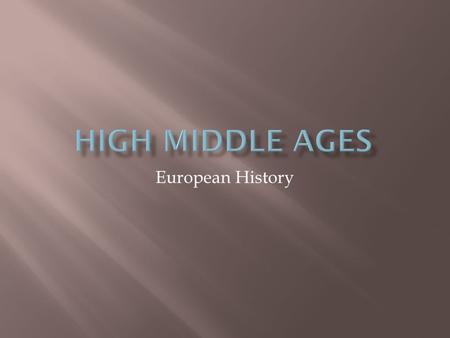 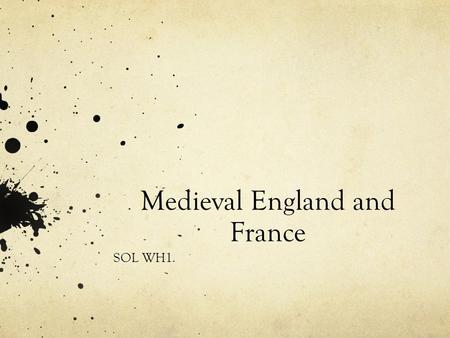 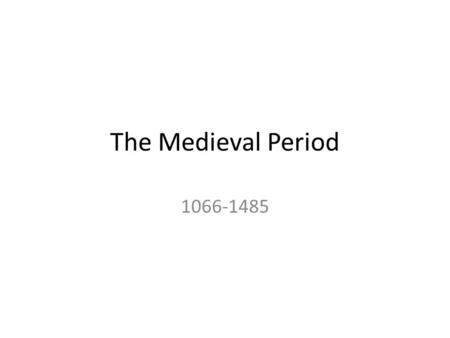