1 Shakespearean Tragedy
The Substance of a Tragedy - from A.C. Bradley

2 Tragedy Concerned primarily with one person
Essentially a tale of suffering and calamity leading to death The suffering and calamity are exceptional. They befall a significant person. They are also, as a rule, unexpected, and contrasted with previous happiness and/or glory. Attended by tragic pity. When he falls suddenly from the height of earthly greatness to the dust, his fall produces a sense of contrast, of the powerlessness of man, and of the omnipotence - perhaps the caprice - of Fortune or Fate.

3 Tragedy Continued… The centre of the tragedy may be said with equal truth to lie in action issuing from a major character flaw, or a character flaw issuing from action (from the common ingredients such as: abnormal conditions of mind The supernatural A chance or accident The action can be defined as conflict: Between two persons Between two passions or tendencies, ideas, principles, forces… There is also a conflict in the hero’s soul

4 The Tragic Hero Is an exceptional being.
His nature is also exceptional: in his nature there is an intensification of ordinary qualities. In almost all, we observe a marked one-sidedness, a predisposition in some particular direction; a total incapacity, in certain circumstances, or resisting the force which draws in this direction; a fatal tendency to identify the whole self with some interest, object, passion, or habit of mind. In the circumstances where we see the hero placed, his tragic trait, which is also his greatness, is fatal to him. In most cases the tragic error involves no conscious breach of right; in some, it is accompanied by a full conviction of right. It is necessary that he should have so much of greatness that in his error and fall we may be vividly conscious of the possibilities of human nature. And with this greatness of the tragic hero is connected, secondly, the centre of the tragic impression: that of tragic waste.

5 The Notion of Tragedy The following definition has been pieced together from Aristotle’s Poetics: Tragedy is an imitation of action. It is serious, complete and of a certain magnitude. It treats of events which are pitiful and terrible and concerns the reversal from good fortune to bad of a great man who, by reason of some weakness or defect of character, is thus the cause of his own downfall. Because this man is great, either by birth or position, his downfall seems more terrible than if he were an ordinary man; it has also far-reaching effects in the lives of others. Because morally he is a man like ourselves- neither eminently virtuous nor viciously depraved- h is misfortune arouses in us the emotion of fear. Because his downfall is partly his own fault, and because it seems to be far out of proportion to the evil of his actions, we experience a feeling of pity for him. Through our sympathies with this tragic hero we undergo a catharsis or purgation of the emotions.

7 Modern Definition of Tragedy
A tragedy is a drama of a protagonist who commands our earnest good will and is impelled in a given world by a purpose, or undertakes an action, of a certain seriousness and magnitude; and by that very purpose or action, subject to that same given world, necessarily and inevitably meets with grave spiritual or physical suffering.

8 Another Modern Definition
Tragedy, in its pure idea, shows us a mortal will engaged in an unequal struggle with destiny, whether that destiny be represented by the forces within or without the mind, the conflict reaches its tragic issue when the individual perishes, but through his ruin the disrupted order of the world is restored and the moral forces reassert their way.

9 Shakespearean Tragedy
A tragedy is a drama of a significant person who, because of a flaw in his character, experiences a fall that leads to suffering and earth, the whole experiences producing pity and fear in the audience. Drama: This means there is ACTION o a serious magnitude involving a number of people interacting on a stage. Significant Person: this is usually a king or prince, or a person of high standing in the community. More than this, the person is significant in that he is noted for being a noble in character in some way that raises him above ordinary people.

11 Shakespearean Tragedy Cont’d…
A Flaw: there is a serious problem or imperfection or predisposition in his character that causes him to err in his actions. The tragic hero, because of his flaw in character, is responsible for his actions and for his own death. The very character trait that makes the person exceptional may be also his flaw. A Fall: the tragic hero “falls” physically to his death, but also falls in the sense of not realizing his true potential. There is a sense of waste at the end of the drama, of the person not having achieved what he should have achieved. Pity and Fear- these are emotions instilled in the audience. The audience identifies with the hero (we put ourselves in his shoes) and we thus feel pity for the hero when he falls to his death. The audience also fears that such things can happen to us if we are not careful enough in real life.

12 THE HERO’S ACTION CAUSES HIS DESTRUCTION
Plot The Story of a Hero Leads up to and includes the death of the hero A tale of suffering and calamity leading to death c. Concerned with person of high degree A leader or head of state His fate affects the nation His fall suggests the powerlessness of man and the power of fate b. Suffering Severe Unexpected and contrast to previous glory 2. Action The tragedy proceeds from the action of people Main source of action is character Hero contributes to his own demise Shakespearean Tragedy 6. Good vs. Evil Villainy is defeated in the end. 3. Elements of the Story The Hero has Abnormal conditions of the mind Encounters with the supernatural Encounters with chance and accident 4. Conflict outward- between persons or groups Inward - between the hero and himself 5. The Hero Exceptional nature Desire, passion, will Tragic Trait- a marked one- sidedness, fatal to the hero A great waste of potential THE HERO’S ACTION CAUSES HIS DESTRUCTION

13 HAMLET AS A TRAGIC HERO PAGAN WORLD (ANCIENT- POLYTHEISTIC)
CHRISTIAN WORLD (MODERN) -REVENGE -FORTINBRAS SENIOR AND KING HAMLET -NORWAY (NORTH) -MORALITY -LAERTES, HORATIO -PARIS, WITTENBERG (HEART OF MODERN EUROPE) HAMLET DENMARK Hamlet (and his soul?) is at a crossroads of a divided world. He moves back and forth between the two worlds and the heroic types within them. i.e. King Hamlet, Laertes, Fortenbras, Horatio. 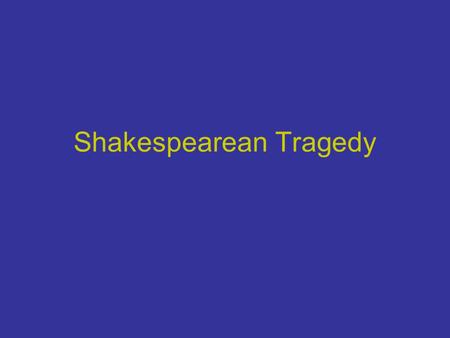 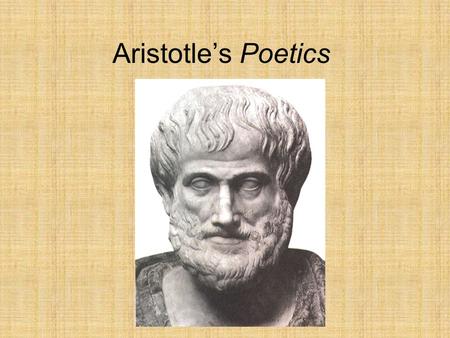 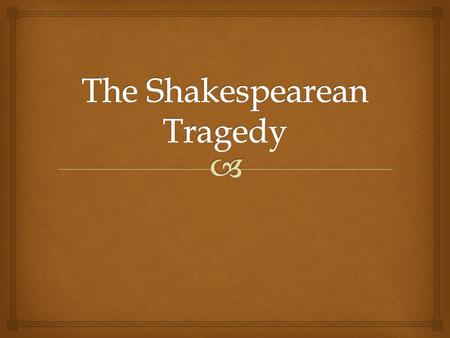