Presentation on theme: "What Is Sociology? Sociology: The systematic study of the relationship between the individual and society and of the consequences of different types of."— Presentation transcript:

1 What Is Sociology? Sociology: The systematic study of the relationship between the individual and society and of the consequences of different types of relationships.

2 What Is Sociology? Sociology Focuses on:
How social relationships influence people’s attitudes and behavior How major social institutions affect us How we affect other individuals, groups, and organizations

3 The Origins of Sociology
Three major social changes during the seventeenth and eighteenth centuries are important to the development of sociology.  The rise of a factory-based industrial economy.  The emergence of great cities in Europe. Political changes, including a rising concern with individual liberty and rights. The French Revolution symbolized this dramatic break with political and social tradition.

5 Aguste Comte Auguste Comte: Lived 1798-1857
Believed that the major goal of sociology was to understand society as it actually operates. Comte favored positivism—a way of understanding based on science. Comte saw sociology as the product of a three-stage historical development:  The theological stage, in which thought was guided by religion.  The metaphysical stage, a transitional phase.  The scientific stage

9 Marx, Durkheim, and Weber Compared
How is life treating you? Marx’s alienated person I really don’t care (because I’m detached from my work and from other people). Durkheim’s anomic person I’m distressed by it (because there are no common rules or norms to guide me). Weber’s rational person Let me think about it, and I’ll get back to you later because I need to make some calculations before I know how to answer).

10 Other Important Founders
1. Harriet Martineau: Feminist and Methodologist Studied social life in Britain and US, translated Comte. Studied the impact of inequality Herbert Spencer Social Darwinism An evolutionary model of society, known for “social Darwinism” but thought that attempts at social reform were wrong.

12 Structural Functionalism
● The structural-functional theory is a framework for building theory that sees society as a complex system whose parts work together to promote solidarity and stability. - It asserts that our lives are guided by social structures (relatively stable patterns of social behavior). - Each social structure has social functions, or consequences, for the operation of society as a whole. - Key figures in the development of this paradigm include Auguste Comte, Emile Durkheim, Herbert Spencer, and Talcott Parsons and Robert Merton

13 Structural Functionalism
● Robert Merton introduced three concepts related to social function: manifest functions, the recognized and intended consequences of any social pattern latent functions, largely unrecognized and unintended consequences and social dysfunctions, undesirable consequences of a social pattern for the operation of society. ● The influence of this paradigm has declined in recent decades. It focuses on stability, thereby ignoring inequalities of social class, race, and gender

15 Social Conflict ●The social-conflict paradigm is a framework for building theory that sees society as an arena of inequality that generates conflict and change. -Most sociologists who favor the conflict paradigm attempt not only to understand society but also to reduce social inequality -Key figures in this tradition include Karl Marx, W. E. B. Du Bois, and Wright Mills ●This paradigm has developed rapidly in recent years. It has several weaknesses. - It ignores social unity based on mutual interdependence and shared values. - Because it is explicitly political, it cannot claim scientific objectivity. - Like the structural-functional paradigm, it envisions society in terms of broad abstractions.

17 Symbolic Interaction ● The symbolic-interaction paradigm is a framework for building theory that sees society as the product of the everyday interactions of individuals. The structural-functional and the social-conflict paradigms share a macro-level orientation, meaning that they focus on broad social structures that shape society as a whole. In contrast, symbolic-interactionism has a micro-level orientation; it focuses on patterns of social interaction in specific settings. Key figures in the development of this paradigm include George Herbert Mead Erving Goffman George Homans Peter Blau

18 Symbolic Interactionism
Symbolic interactionism attempts to explain more clearly how individuals actually experience society. However, it has two weaknesses: Its micro-orientation sometimes results in the error of ignoring the influence of larger social structures. By emphasizing what is unique, it risks overlooking the effects of culture, class, gender, and race.

Download ppt "What Is Sociology? Sociology: The systematic study of the relationship between the individual and society and of the consequences of different types of." 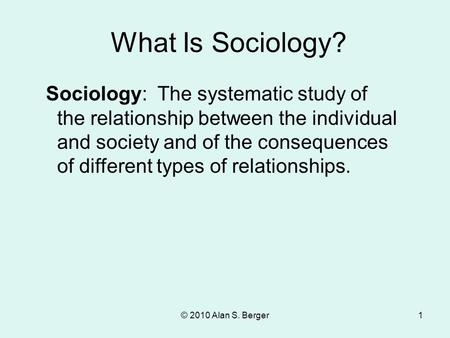 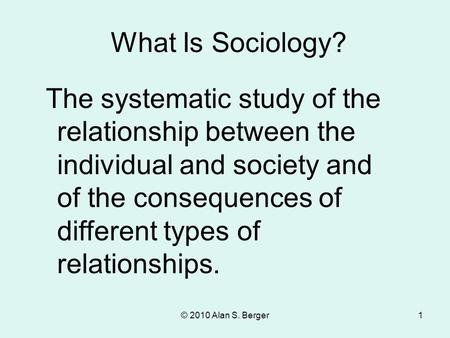 What Is Sociology? The systematic study of the relationship between the individual and society and of the consequences of different types of relationships.