2 Plants produce lipids Plants produce the majority of the world's lipids, and most animals, including humans, depend on these lipids as a major source of calories and essential fatty acids. Like other eukaryotes, plants require lipids for membrane biogenesis, as signal molecules, and as a form of stored carbon and energy. Soft tissues and bark each have distinctive protective lipids that help prevent desiccation and infection.

3 Major differences between lipid metabolism in plants and other organisms

4 Fatty acid synthesis in plastids
The presence of chloroplasts and related organelles in plants has a profound effect on both gross lipid composition and the flow of lipid within the cell. Fatty acid synthesis occurs not in the cytosol as in animals and fungi, but in the chloroplast and other plastids. Acyl groups must then be distributed to multiple compartments, and the complex interactions between competing pathways are a major focus of plant lipid biochemists. It is also significant that the lipid bilayers of chloroplasts are largely composed of galactolipids rather than phospholipids. As a result, galactolipids are the predominant acyl lipids in green tissues and probably on earth profound (sangat besar)

6 Plant lipid geography; Plastids
All living plant cells contain one or more types of plastid. Chloroplasts and other plastids are enriched in galactolipids They also contain a unique sulfolipid, sulfoquinovosyldiacylglycerol, whose head group is a modified galactose.

8 Figures given are percentages (as % of total lipid) of the pictured lipid in the membranes specified
Composition of plastid membranes.

10 ER importance for developing seeds -stored
Although plastids do have the ability to synthesize polyunsaturated fatty acids, they are formed on acyl lipid substrates and are not typically exported. Thus, the endoplasmic reticulum desaturation pathways are of particular importance for developing seeds that store large quantities of 18 : 2 and 18:3. Pathways for the production of unusual fatty acids found primarily in seed oils have likewise been described in microsomes.

12 Mitochondria The plant mitochondrion is probably the organelle investigated the most thoroughly with respect to lipid metabolism. Its ability to synthesize phosphatidylglycerol and cardiolipin is well established. Although most fatty acids for mitochondrial membranes are imported from the plastids or the ER, recently mitochondria have been shown to synthesize low levels of fatty acids from malonate. Octanoate is a major product of this pathway and serves as a precursor for the lipoic acid cofactor needed by glycine decarboxylase and pyruvate dehydrogenase

13 Glyoxysomes and peroxisomes
As in mammals, there is evidence for both mitochondrial and peroxisomal β-oxidation systems. In plants, the peroxisomal system appears to be the more significant [3]. Unlike mammals, plants can use the peroxisomal enzymes to catabolize long- chain fatty acids all the way to acetyl-CoA. Under certain conditions, such as oilseed germination, plants also differentiate specialized peroxisomes called glyoxysomes

14 The synthetic capabilities of plastids and other plant organelles
compart

23 Elongated Elongation and desaturation of fatty acids in plastids The fatty acid is elongated by first transferring it to another ACP and then condensing it with malonyl- ACP. The enzyme b-ketoacyl- ACP synthase I, catalyzing this reaction, enables the formation of fatty acids with a chain length of up to C-16. A further chain elongation to C-18 is catalyzed by b- ketoacyl-ACP synthase II

24 Contribution of the three ketoacyl synthases (KASI, II and llI) to fatty acid elongation. Each circle represents one round of the elongation cycle catalyzed by ketoacyl-ACP synthase, enoyl-ACP reductase, hydroxyacyl-ACP dehydrase, and acyl- ACP reductase.

25 Termination of FAS In most plants, oleate and palmitate are the major products of fatty acid synthesis in plastids. These products are released from their ACP thioesters by the activity of thioesterases. The activity of acyl-ACP thioesterases has two functions. First, it terminates synthesis by releasing free fatty acids. The latter are then exported outside plastids as acyl- CoAs. So, a second function of the thioesterases is connected with the export of acyl chains because this destines fatty acids for the ‘eukaryotic pathway’ of lipid metabolism.

30 Lipid storage in plants
A plant stores reserve material in its seeds in order to allow seedling growth of the next generation until photosynthetic capacity can be established. The three major storage materials are oil, protein and carbohydrate, and almost all seeds contain some of each. However, their proportions vary greatly. For example, the amount of oil in different species may range from as little as 1-2% in grasses such as wheat, to as much as 60% of the total dry weight of the castor seed. With the exception of the jojoba plant, which accumulates wax esters in seeds, plants store oil as triacylglycerol (TAG).

31 Lipid body structure and biogenesis
In the mature seed, TAG (triacylglycerol) is stored in densely packed lipid bodies, which are roughly spherical in shape with an average diameter of 1 µm. This size does not change during seed development, and accumulation of oil is accompanied by an increase in the number of lipid bodies. The very large number of lipid bodies in an oilseed cell (often >1000) contrasts strikingly with animal adipose tissue where oil droplets produced in the cytosol can coalesce into a few or only one droplet.

32 When a seed germinates, the TAG stored in the lipid bodies becomes the substrate for lipases.
In at least some cases, peroxidation of polyunsaturated fatty acids by a lipid body lipoxygenase precedes the release of fatty acids from TAG. Typically lipases and lipid body lipoxygenase are active only after germination is triggered by imbibition and other environmental signals. Fatty acids released by the lipid bodies are further metabolized through the 13-oxidation pathway and glyoxylate cycle in the glyoxysomes

34 Acyl-ACP synthesis in plants
Fatty acid synthases may be classified into two groups. 'Type I' fatty acid synthases are characterized by the large, multifunctional proteins typical of yeast and mammals, while 'Type II' synthases of most prokaryotes are dissociable into components that catalyze individual reactions . Plants, while certainly themselves eukaryotic, appear to have inherited a Type II fatty acid synthase from the photosynthetic prokaryotes from which plastids originated

36 Acyl-ACP synthesis in plants; Components of plant fatty acid synthase
Fatty acid synthase is generally defined as including all polypeptides required for the conversion of acetyl and malonyl-CoA to the corresponding ACP derivatives. All components of fatty acid synthase occur in plastids, although they are encoded in the nuclear genome and synthesized on cytosolic ribosomes. Most of the 8-10 enzymes of the pathway are soluble when isolated from homogenates. Nevertheless, some evidence suggests that at least ACP and some subunits of acetyl-CoA carboxylase may be associated with the plastid membranes.

38 The acetoacetyl-ACP product then undergoes the standard reduction- dehydration-reduction sequence to produce 4 : 0-ACE the initial substrate of ketoacyl- ACP synthase I. KAS I is responsible for the condensations in each elongation cycle up through that producing 16:0-ACE The third ketoacyl synthase, KAS II, is dedicated to the final plastidial elongation, that of 16 : 0-ACP to 18 : 0-ACP

39 Desaturation of acyl-ACPs
The major components of the long-chain acyl-ACP pool in most plant tissues are 16:0- ACP 18: 0-ACP and 18 : l-ACP. This finding highlights the importance of stearoyl-ACP desaturase, the plastidial enzyme responsible for 9-desaturation in plants. The plant enzyme introduces the double bond directly to the 9-position It is a soluble enzyme and is specific for acyl- ACPs rather than acyl-CoAs

40 AcyI-ACP thioesterases
Plants must also release sufficient fatty acid from ACP to supply the extraplastidial compartments Since the typical chloroplast exports primarily 18:1 and 16:0, the same fatty acids that comprisethe greatest fraction of long-chain acyl-ACPs, It might be assumed that a relatively non- specific thioesterase releases 16- and 18- carbon fatty acids from ACE

42 The most prominent thioesterase in most plants has a strong preference for 18: 1- ACE making 18 : 1 the fatty acid most available for extraplastidial glycerolipid synthesis. In contrast, mangosteen, a plant with seed oil particularly high in 18 : 0, contains an 18 : 0-ACP thioesterase gene that has been used to engineer rapeseed with high 18:0 content

46 16: 3 and 18 : 3 plants Plastids have the potential to use phosphatidic acid from the prokaryotic pathway for all of their glycerolipid syntheses. However, not all plants do so; in some cases, the prokaryotic acyl chain arrangement is found only in plastidial phosphatidylglycerol, whereas galactolipids are derived from diacylglycerol imported to the plastids from the ER. As indicated above, the eukaryotic acyltransferases of the endoplasmic reticulum produce substantially more 18/18 than 16/18 lipids, and it is chiefly the 18/18 units that are assembled into galactolipids by plants with a minor prokaryotic pathway

47 Plants that import diacylglycerol for galactolipids are rich in 18 : 3 and are called 18 : 3 plants.
Species in which most galactolipid is derived from the prokaryotic 18/16 or 16/16 diacylglycerol contain substantial 16 : 3 and are known as 16 : 3 plants. a 16 : 3 plant, Arabidopsis thaliana, may be converted to a de facto 18 : 3 plant by a single mutation in plastidial glycerol-3-phosphate acyltransferase. Under these conditions, 16 : 3 content is reduced dramatically, and when isolated chloroplasts are labeled with glycerol-3-phosphate, only phosphatidylglycerol is labeled 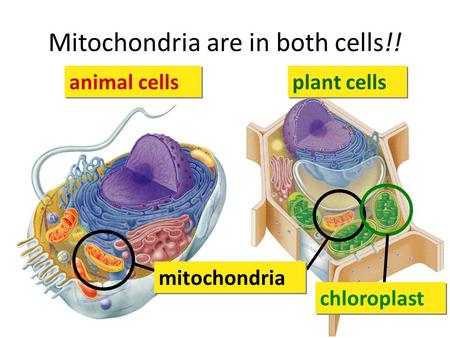 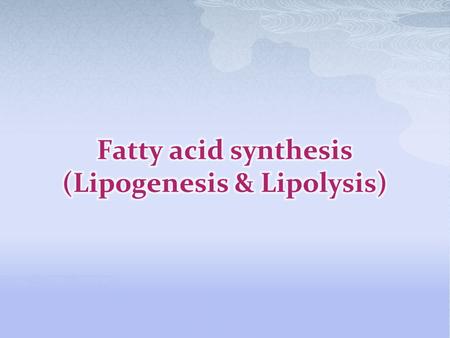 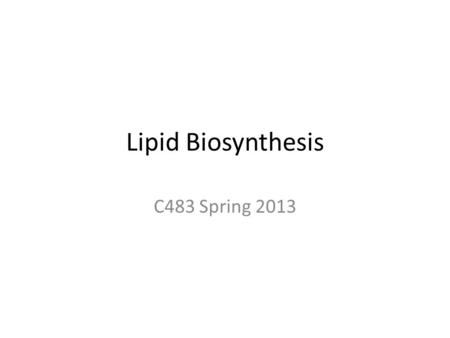 Lipid Biosynthesis C483 Spring Which of these is NOT a difference between fatty acid synthesis and beta oxidation? A)Synthesis requires an enzyme. 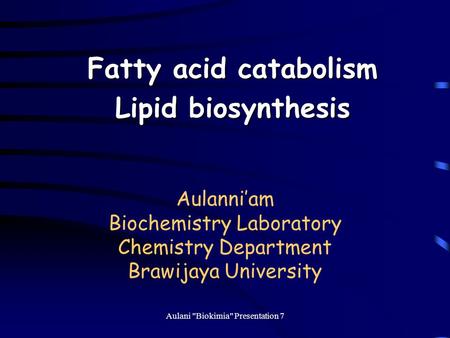 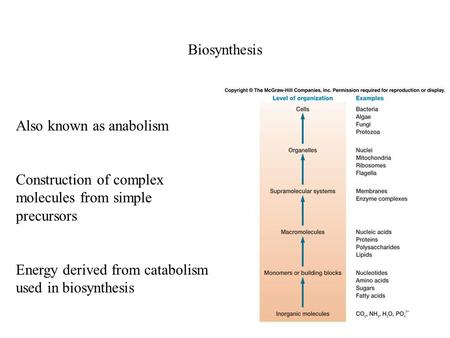 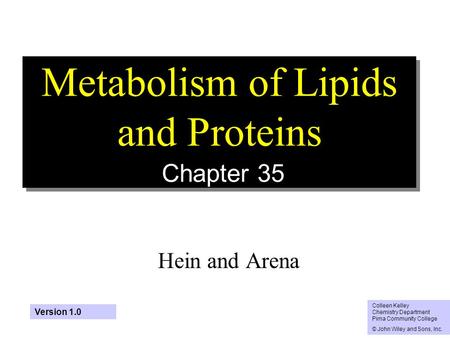 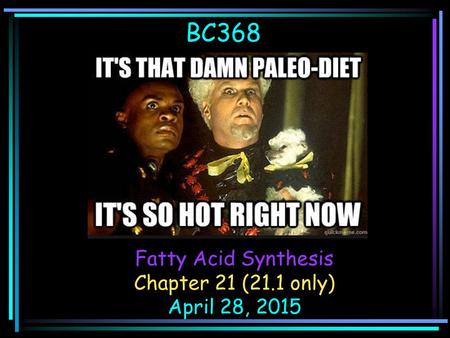 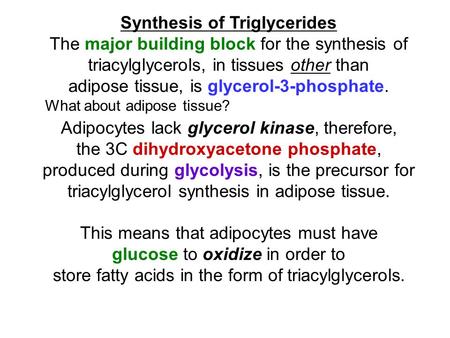 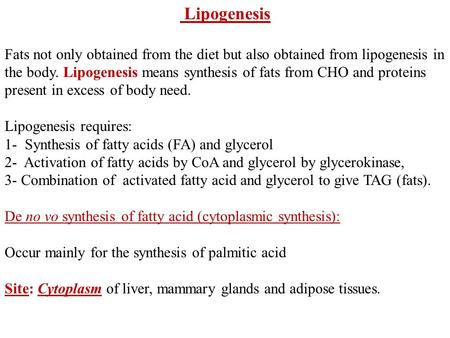 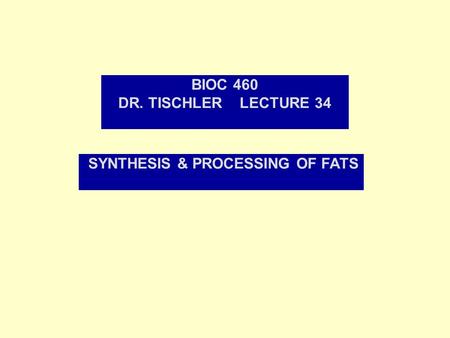 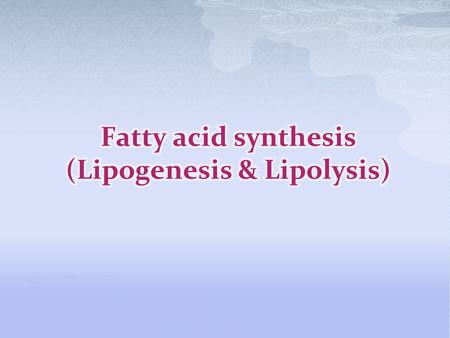 Introduction  lipids are a good source of energy as 1 gm supplies 9.1 calories, which is over double that supplied by carbohydrates or protein.  Dietary. 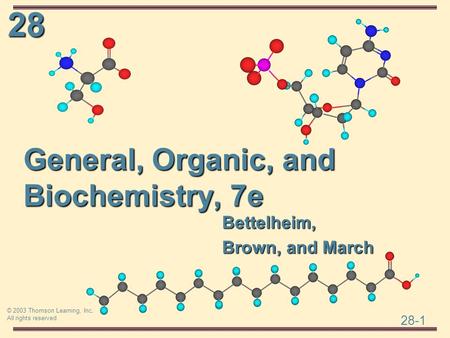 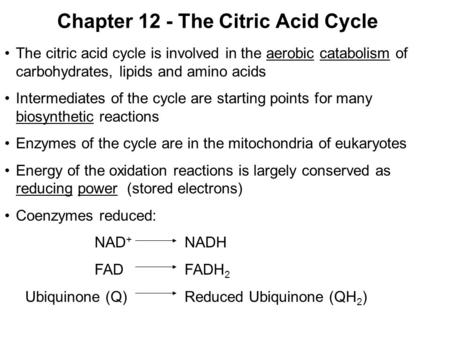 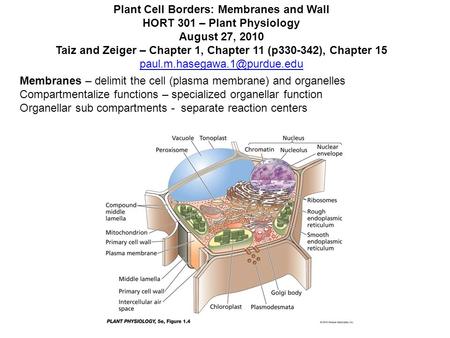 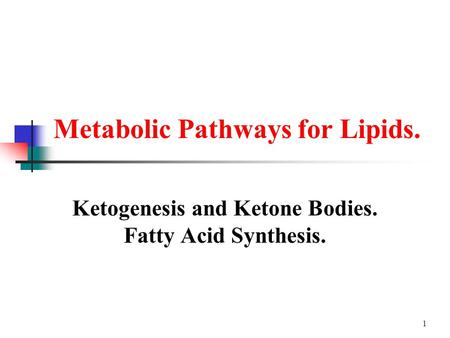 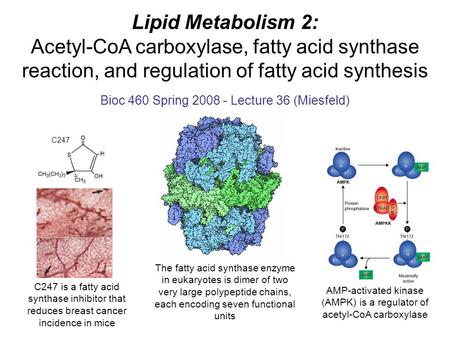 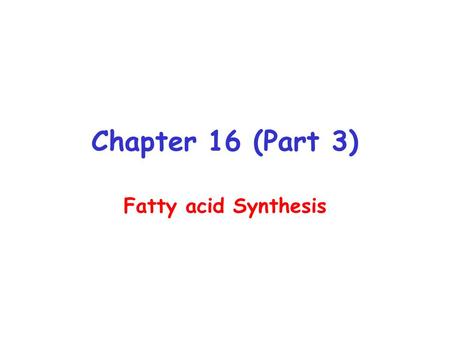 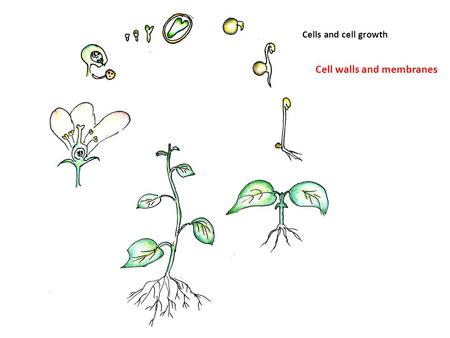 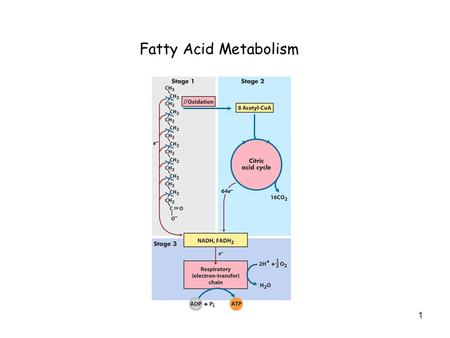 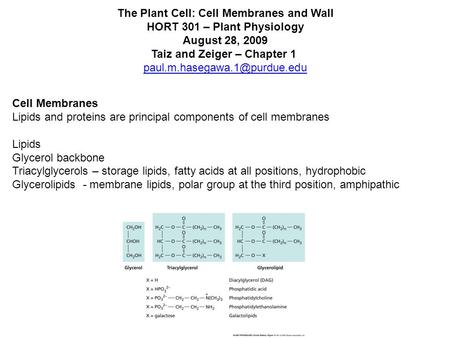