2 What Is Behavior? Behavior is anything an animal does in response to a stimulus. A stimulus is an environmental change that directly influences the activity of an organism. Example: Heat stimulates the lizard to seek shade.

3 Behavior Patterns Animals carry on many activities such as getting food, avoiding predators, caring for young, finding shelter, and attracting mates –that enable them to survive. These behavior patterns, therefor have adaptive value.

5 Inherited Behaviors Natural selection favors certain behaviors.
Individuals with behavior that makes them more successful at surviving and reproducing tend to produce more offspring than individuals without the behavior. These offspring will inherit the genetic basis for successful behavior.

6 Inherited Behavior Inherited behavior of animals is called innate behavior. Two types of innate behavior: automatic and instinctive behavior Example: As an insect moves across a toad’s line of sight, the insect detector cells in the toads retinas signal the brain, thus initiating an innate response; the toads tongue flipping out to capture the insect.

7 Automatic Response A fight-or-flight response mobilizes the body for greater activity. Your body is being prepared to fight or run from danger Controlled by hormones and the nervous system A reflex is a simple, automatic response to a stimulus that involves no conscious control. (Simplest form of innate behavior) Ex.: Touching something hot and pulling your hand back

8 Instinctive Behavior An instinct is a complex pattern of innate behavior. Instinctive behavior begins when the animal recognizes a stimulus and continues until all parts of the behavior have been performed.

9 Types of Instinctive Behavior
Courtship behavior ensures reproduction Courtship behavior is the behavior that males and females of a species carry out before mating. Territoriality reduces competition A territory is a physical space an animal defends against other members of its species.

11 Types of Instinctive Behavior
Behavior resulting from internal and external cues Circadian rhythms are a 24 hour, light-regulated, sleep/wake cycle of behavior. (keeps you alert during the day and helps you relax at night) Migration is the instinctive, seasonal movement of animals.

12 Types of Instinctive Behavior
Behavior resulting from internal and external cues continued Hibernation is a state in which body temperature drops, oxygen consumption decreases, and breathing rates decline. Estivation is a state of reduced metabolism that occurs in animals living in conditions of intense heat.

13 Learned Behavior Learning, or learned behavior, takes place when behavior changes through practice or experience. Learning allows an animal to adapt to change, an ability that is important for animals with long life spans.

14 Kinds of Learned Behavior
Habituation: A simple form of learning Habituation occurs when an animal is repeatedly given a stimulus that is not associated with any type of punishment or reward. Example: horses or cows disregarding noisy cars. Imprinting: A permanent attachment Imprinting is a form of learning in which an animal, at a specific critical time of its life, forms a social attachment to another object. Example: duckling learning to recognize their mother and follow her for food and protection

15 Kinds of Learned Behavior
Learning by trial and error Trial and error learning is a type of learning in which an animal receives a reward for making a particular response. Examples: learning to ride a bike or birds using different materials to build a nest until it is just right Motivation is an internal need that causes an animal to act, and is necessary for learning to take place.

17 Kinds of Learned Behavior
Insight: the most complex type of learning Insight is learning in which an animal uses previous experience to respond to a new situation. 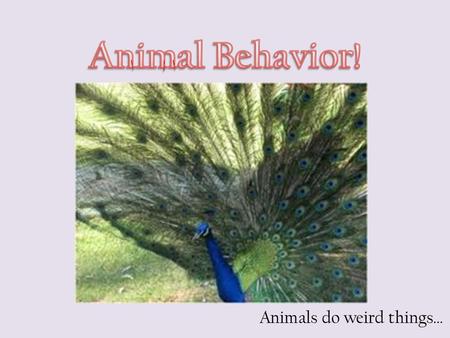 Animals do weird things…. Behavior is the way an organism reacts to changes in its internal condition or external environment. 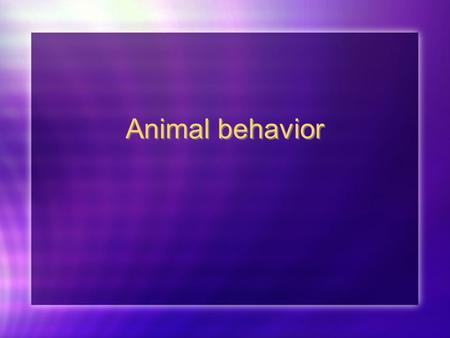 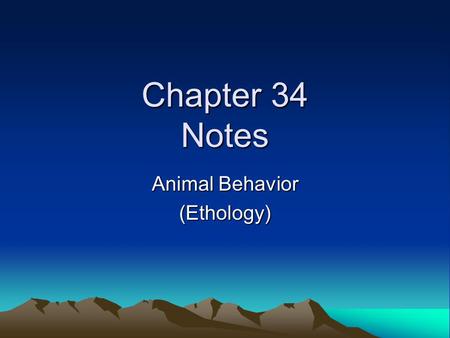 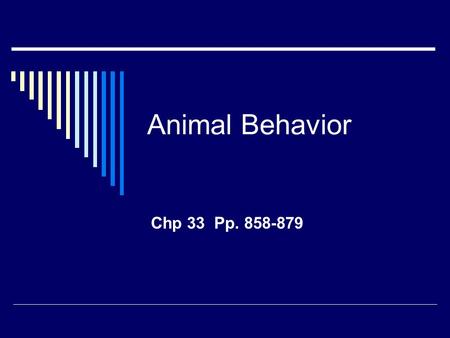 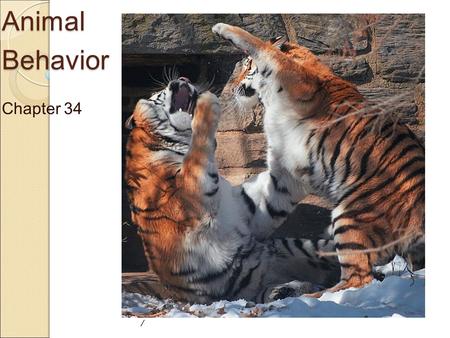 Animal Behavior Chapter 34 /. What is a behavior? Any response to a stimulus (an external signal) Examples of stimuli Sounds Smells Sights (light vs dark) 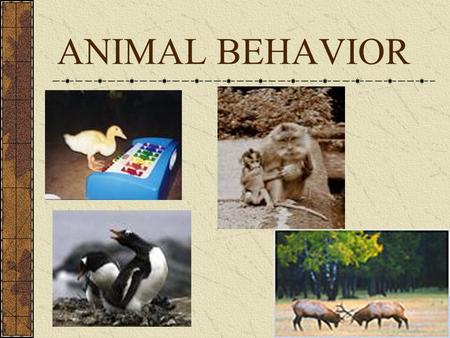 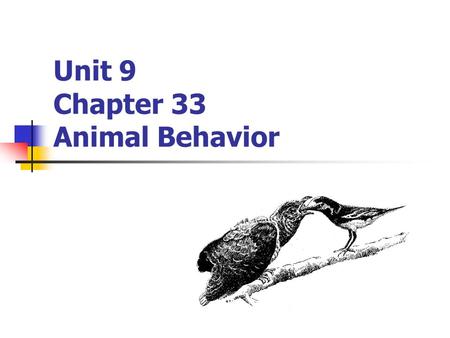 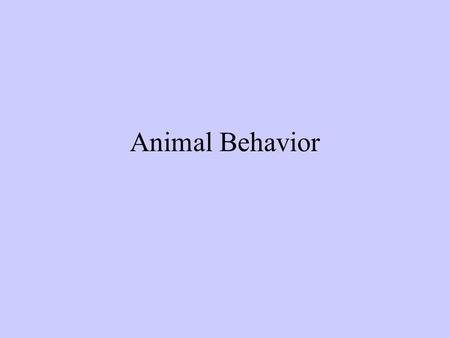 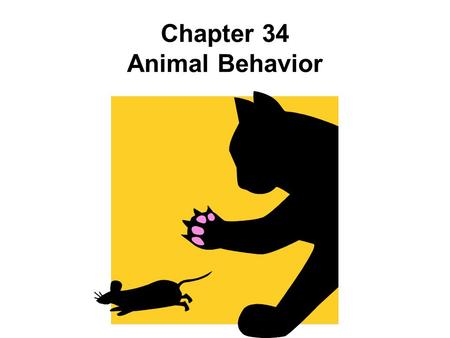 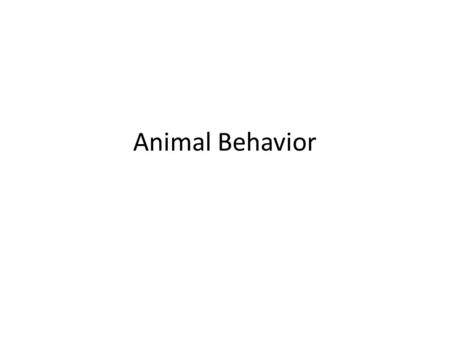 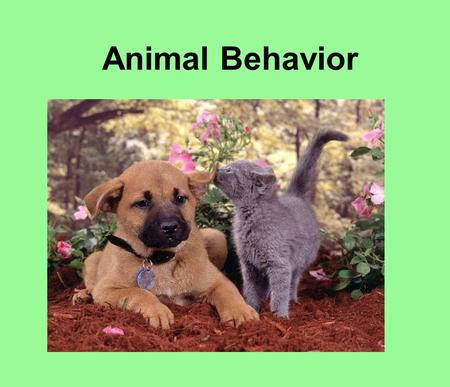 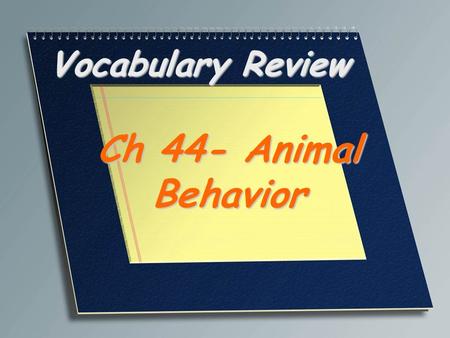 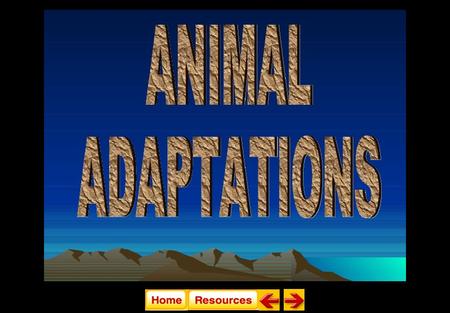 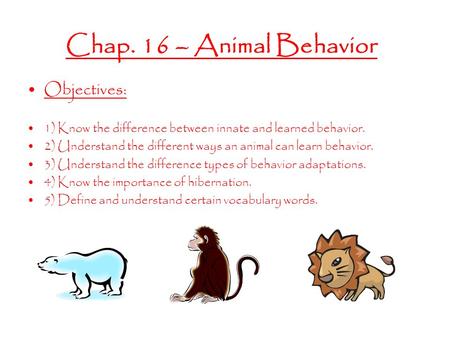 Chap. 16 – Animal Behavior Objectives: 1) Know the difference between innate and learned behavior. 2) Understand the different ways an animal can learn. 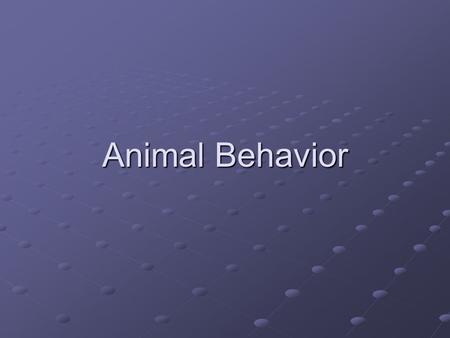 Animal Behavior. Behavior is the way an organism reacts to changes in its internal condition or external environment. A stimulus is any kind of signal. 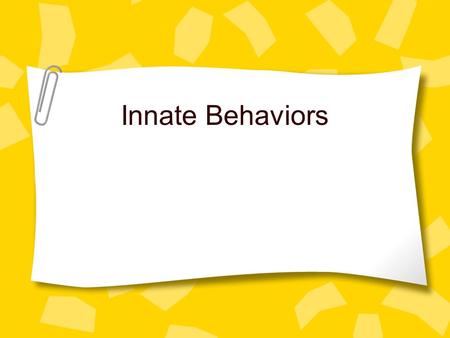 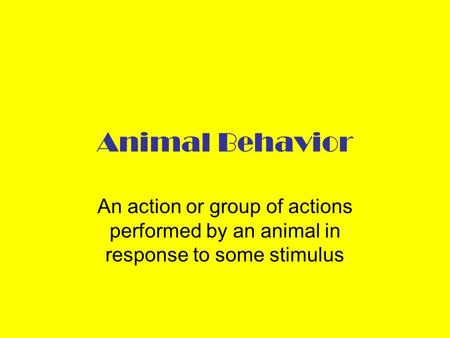 Animal Behavior An action or group of actions performed by an animal in response to some stimulus. 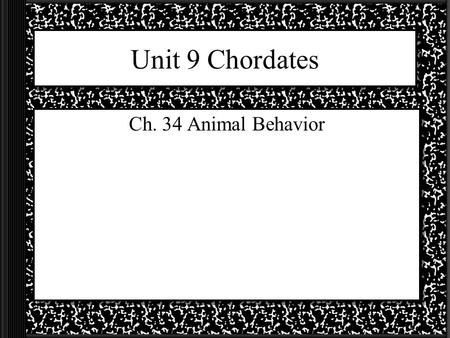 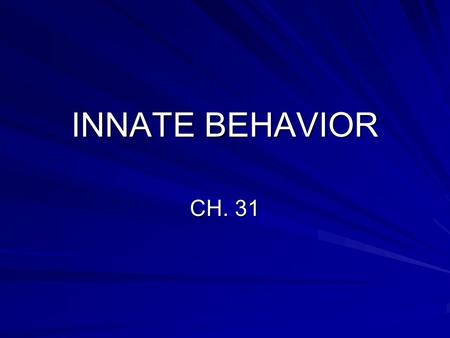 INNATE BEHAVIOR CH. 31. I. BEHAVIOR A. Define Behavior 1. Anything an animal does in response to a stimulus. a.Example: Heat stimulates a lizard to seek. 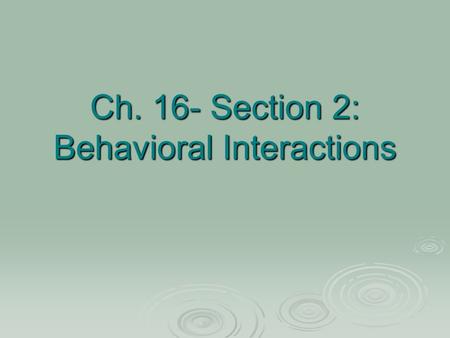