Presentation on theme: "By Sean Merrett and Melissa Slingerland. are also known as genetically modified or GM crops A transgenic crop plant contains a gene or genes which have."— Presentation transcript:

1 By Sean Merrett and Melissa Slingerland

2 are also known as genetically modified or GM crops A transgenic crop plant contains a gene or genes which have been artificially inserted instead of a plant acquiring them through pollination. The inserted gene sequence (transgene) may come from another unrelated plant, or completely different species. Throughout history all crops have been genetically modified from their original wild state by domestication, selection, and control of breeding over long periods of time. Genetic engineering speeds up the process and increases the variety of genes which can be inserted into a particular plant.

3 An Overview of the Crop Genetic Engineering cycle

4 This was the first “genetically modified” food approved by the FDA in 1994. It was eventually pulled off the market in 1997 because of the controversy surrounding it. Questions arose about it’s effects on human health, the environment, potential gene transfer, and the creation of “Frankenfood”.

5 The Flavr Savr tomato ripens on the vine – resulting in fuller flavour. It is modified so that it remains firm after harvesting. Flavr SavrTraditional Ripe and Increased Flavour. Ripe but decreased Flavour. The traditional tomato is sprayed with ethylene after shipping to induce ripening. The traditional tomato must be harvested while it is still green and firm so that it is not crushed on the way to the supermarket.

7 As of 2003, the Canadian government has approved over 60 genetically modified foods for sale in Canada. Some of these include: insect resistant corn herbicide tolerant soybean, sugarbeet, corn, and rice virus resistant squash insect and virus resistant potato

8 Technology Protection System, also known as the “terminator”, incorporates a trait that kills developing plant embryo’s so seeds cannot be saved and replanted in subsequent years “Traitor”, also known as Trait-specific Genetic Use Restriction Technology incorporates a control mechanism that requires yearly applications of a propriety chemical to activate desirable traits in the crop the farmer can save and replant seeds but cannot gain the benefits of the controlled traits unless he pays for the activating chemical each year Control Mechanisms used by Seed Companies

Download ppt "By Sean Merrett and Melissa Slingerland. are also known as genetically modified or GM crops A transgenic crop plant contains a gene or genes which have." 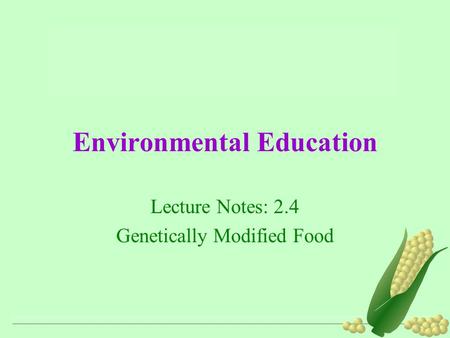