3 DateEvent 500-1500Middle Ages. The time between the Fall of the Western Roman Empire and The Renaissance. 400-600Small Germanic Kingdoms replaced Roman provinces. Church survived the fall & offered order and security to the people. 496Clovis was losing a battle so he prayed to the Christian God & won! Publicly converted after. 511Clovis and the Church formed an alliance that united the Franks into one Kingdom. 600The Church had converted many Germanic peoples living in Rome’s former lands. 480-543Twins Benedict and Scholastica established monasteries & convents in Italy. They completely devoted their lives to spreading Christianity. 520Benedict wrote a book describing a strict set of laws for monks to live by. Monasteries were the best-educated communities in Europe.

4 590Pope Gregory I became Pope & expanded the authority of the Papacy beyond its spiritual role to include a secular power involved in politics. 700Mayor of the Palace was the most powerful person in Frankish Kingdom. 719Charles Martel was Mayor of the Palace and held more power than the king. 719Extended the Franks’ reign to the North, South and East. 732Charles Martel defeated the Muslims at the Battle of Tours. Saved the Christian Church!! 751-987The Carolingian Dynasty started when Pepin the Short fought for the Pope and in return the Pope made anointed him “King by the Grace of God”.

5 768Pepin the Short died. Oldest son died in 771 leaving Charlemagne in charge!! 771Charlemagne ruled the Kingdom & was an amazing ruler. He started expanding immediately. 800Charlemagne’s empire was larger than the Byzantine Empire. 800Pope Leo III invited Charlemagne to Rome to gain back some popularity. At church he crowed Charlemagne Emperor. 814Charlemagne died & left the Empire to his son Louis the Pious who left the empire to his three sons. 843Three sons fought over Empire & signed the Treaty of Verdun dividing the Empire into 3 Kingdoms. Central authority broke down. 800-1000Invasions destroyed the Carolingian Dynasty. 846Muslims sacked Rome. Viking started to invade from the North. 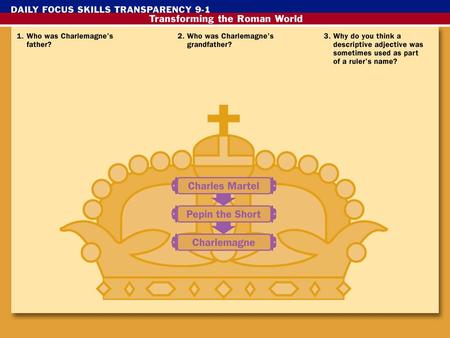 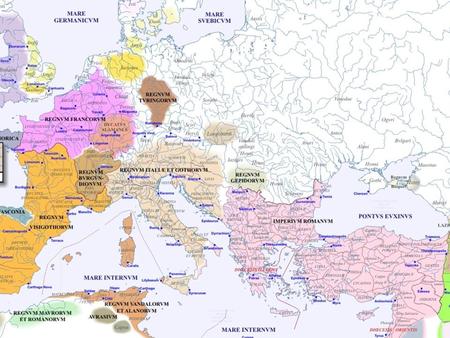 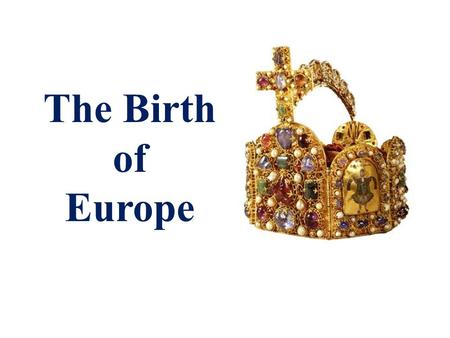