7 F REUD ’ S S TRUCTURAL M ODEL OF P ERSONALITY Id (Pleasure Principle) We are born with our Id, which is an important part of our personality. Id allows to get our basic needs meet. Id is based on our pleasure principle. In other words, the id wants whatever feels good at the time, with no consideration for the reality of the situation. When a child is hungry, the id wants food, and therefore the child cries. When the child needs to be changed, the id cries. When the child is uncomfortable, in pain, too hot, too cold, or just wants attention, the id speaks up until his or her needs are met. The id doesn't care about reality, about the needs of anyone else, only its own satisfaction.

8 F REUD ’ S S TRUCTURAL M ODEL OF P ERSONALITY Ego (Reality Principle) Within the next three years, as the child interacts more and more with the world, the second part of the personality begins to develop, the Ego. Ego The ego is based on the reality principle. The ego understands that other people have needs and desires and that sometimes being impulsive or selfish can hurt us in the long run. It’s the ego's job to meet the needs of the id, while taking into consideration the reality of the situation

9 F REUD ’ S S TRUCTURAL M ODEL OF P ERSONALITY Superego (Moral Principle) By the age of five, or the end of the phallic stage of development, the Superego develops. Superego The Superego is the moral part of us and develops due to the moral and ethical restraints placed on us by our caregivers. Many equate the superego with the conscience as it dictates our belief of right and wrong.

10 F REUD ’ S S TRUCTURAL M ODEL OF P ERSONALITY In a healthy person, according to Freud, the ego is the strongest so that it can satisfy the needs of the id, not upset the superego, and still take into consideration the reality of every situation. Not an easy job by any means, but if the id gets too strong, impulses and self satisfaction take over the person's life. If the superego becomes to strong, the person would be driven by rigid morals, would be judgmental and unbending in his or her interactions with the world.

11 T HE P SYCHOANALYTIC P ERSPECTIVE P SYCHOSEXUAL T HEORY : B ASIC A SSUMPTION The basic assumption is that human beings are powerful innate forces known as instincts or drives. Instincts or drives energizes and direct all human psychic and physical activities. Libido is physiological and emotional energy associated with the sex drive. The concept was originated by Sigmund Freud, who saw the libido as linked not only with sexual desire but with all constructive human activity.Sigmund Freud He believed that psychiatric illnesses were the result of misdirecting or suppressing the libido.

14 F REUDIAN D EVELOPMENTAL P ROCESS Biological and psychological instincts and drives are present at birth in the form of hunger and discomfort and these drives are housed in Id.  The Id operates on the ‘pleasure principle’ (gain pleasure and avoid displeasure)  Id seeks instant gratification of its drives or needs. Ego develops some 6-8 months after birth (Reality Principle) Superego develops (between 3-5 years) and becomes the articulated moral principle. Id, Ego, and Superego constitute Freudian personality structure with amazing dynamics.

15 F REUD P SYCHO -S EXUAL T HEORY ORAL Stage This occurs from birth to about 1 year, and the libido is focused on the mouth. The individual may be frustrated by having to wait on another person, being dependent on another person. Being fixated at this stage may mean an excessive use of oral stimulation, such as cigarettes, drinking or eating.

18 F REUD P SYCHO -S EXUAL T HEORY A NAL S TAGE ( CONTINUE ……) These things are not just related to toilet training but also the baby must learn to control urges and behaviors. What goes wrong here is either parents being too controlling or not controlling enough. Anally retentive person is rigid, overly organized, subservient to authority vs. anally expulsive person is little self-control, disorganized, defiant, hostile.

20 F REUD P SYCHO -S EXUAL T HEORY PHALLIC Stage This period starts about age 4-5 years. The libidinal energy shifts from the anal region to the genital region. Some critical episodes for development occur during this stage, but these episodes occur differently for boys and girls. Oedipus conflict or Electra complex develop in boys and girls. The boy begins to fall in love with his mother, and sees his father as a rival for her affections. Similarly, girls become nearer to father. But she is not against her mother. The boy will adopt his father’s beliefs and ideals as his own and move on to the latency stage. Whereas girls will develop the moral character of mother.

21 O EDIPUS OR E LECTRA COMPLEX IN BOYS AND GIRLS

22 I DENTIFY WITH F ATHER

24 F REUD P SYCHO -S EXUAL T HEORY LATENCY Stage The Latency period begins sometimes around the age of six and ends when puberty starts to begin. In this phase, the Oedipus conflict was dissolved and set free, resulting in a relatively conflict-free period of development. The child begins to make connections to siblings, other children, and adults.

25 F REUD P SYCHO -S EXUAL T HEORY GENITAL Stage The genital stage begins at age twelve or thirteen and continues throughout adulthood. Involves the development of the genitals, and libido begins to be used in its sexual role, and the individual starts to become conscious of sex and their sexual desires towards members of the opposite sex. To have a fully functional adulthood, and to accomplish ‘appropriate’ heterosexual maturity, the previous stages need to be fully resolved.

27 F IXATION O F L IBIDO Freud believed that sexual development could be negatively affected if there was too much excitement or inhibition associated with a particular psychosexual stage. The result of either too much excitement or inhibition would result in a “fixation of libido”, which would cause the libido to become “stuck” in one particular erogenous zone. This could cause a person to develop various problems later in life, such as overeating, constipation, alcoholism, fetishism, erectile dysfunction and an inability to enjoy sex or a lack of sexual desire.

31 C RITICISMS O F F REUD ’ S P SYCHOSEXUAL T HEORY Many people do not agree with Freud’s theory, and suggest that his views on sexual development were a result of the era in which he was brought up in.theory Freud lived during the Victorian era, a time in which the display of sexual desires and sexuality was generally discouraged. As a result, this may have heavily influenced Freud’s views and the theory on sexual development he ultimately came up with.

32 C RITICISMS O F F REUD ’ S P SYCHOSEXUAL T HEORY Many people today may view Freud’s theory with disgust, especially his belief that the child possessed a sexual desire for their parent.child It could be the case, as some people would say, that the child did not have a sexual interest in their parent, but rather was jealous of the power they had within that family. As a result the child wishes to take the place of their parent, but despite their desire to do so they cannot. It is also important to remember that for any theory there is a tendency for the theorist to project their own views, and possibly their own experiences in life onto that theory. So what may be true ( and therefore apply to ) one person, may not be true ( and apply ) to another. 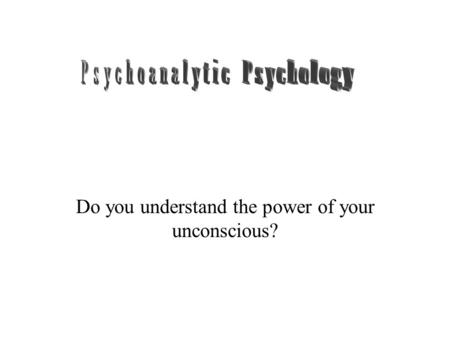 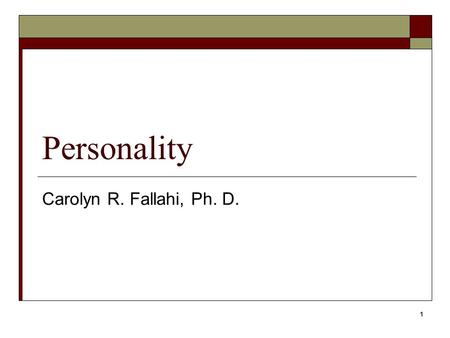 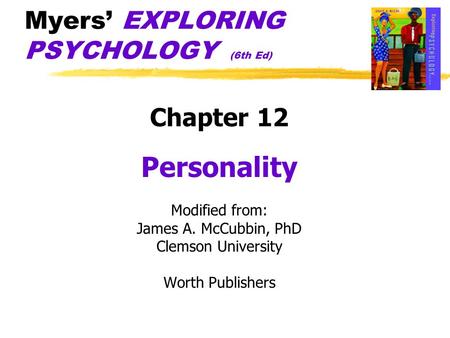 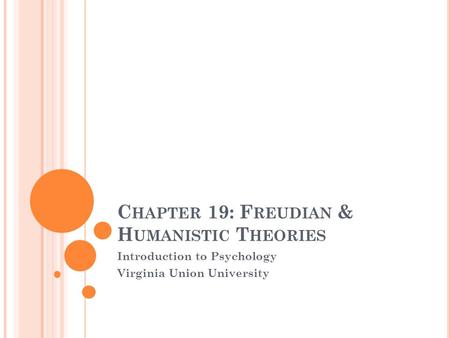