Presentation on theme: "Developing fuels. Why burn it? Come up with a definition and description, uses AND equation for COMBUSTION of octane."— Presentation transcript:

2 Why burn it? Come up with a definition and description, uses AND equation for COMBUSTION of octane.

3 Why burn it? Combustion is a process that everyone has experienced. It is used to heat homes, to power automobiles, and even to produce electricity. Combustion is an exothermic reaction between oxygen and a hydrocarbon. Combustion requires a certain amount of heat to begin, but once started the reaction proceeds spontaneously generating water vapour and carbon dioxide along with large amounts of energy in the form of heat and light.

5 Incomplete combustion – what Chemguide says Incomplete combustion (where there isn't enough oxygen present) can lead to the formation of carbon or carbon monoxide. As a simple way of thinking about it, the hydrogen in the hydrocarbon gets the first chance at the oxygen, and the carbon gets whatever is left over! The presence of glowing carbon particles in a flame turns it yellow, and black carbon is often visible in the smoke. Carbon monoxide is produced as a colourless poisonous gas.

8 Petrol and Crude Oil Crude oil is separated by fractional distillation works because the molecules have different boiling/condensation points many of these hydrocarbons are alkanes, and are sorted into fractions each fraction has a range of boiling points in the distillation narrow boiling ranges of limited carbon number (eg petrol is C 5 to C 7 boiling point 25C -75C) Gasoline and gas oil fractions are sources of petrol components Naptha used for high grade petrol and chemical feedstocks

11 What’s left over? After distillation there is a residue left over Can be used to make useful products First is distilled again under reduced pressure Vacuum distillation avoids high temps that would be needed at atmospheric pressure (which would crack the hydrocarbons) More volatile oils distils Oils are used as fuel oils in power stations or ships Others are used as base for lubricating oils

12 Winter and summer petrol Not as simple as sending straight run gasoline to the pump. Petrol has to be blended to get the right properties – Volatility In a car engine mixture of petrol vapour and air is ignited When weather is cold petrol is difficult to vaporise – car difficult to start How do petrol blenders solve the problem?

13 Winter and summer petrol Petrol companies make different blends for different times of year Winter – more volatile compounds vaporise more easily, more small molecules such as butane and pentane Summer – in hot weather you don’t want too many volatile compounds – petrol would vaporise to easily and you would lose petrol from the tank – costly and polluting Different blend for different countries How would petrol blends differ in Russia and Egypt ?

14 The problem of knocking Octane rating of petrol is important characteristic petrol blenders must take into consideration This is a measure of the tendency of the petrol to cause a problem known as ‘Knock’ Figure 12 How a four-stroke petrol engine works. The compression stroke is shown here. The piston compresses the petrol–air mixture, then a spark makes the mixture explode, pushing the piston down and turning the crankshaft.

16 The problem of knocking In a petrol engine, the petrol-air mixture has to until at the right time As the fuel air mixture is compressed it heats up Many hydrocarbons auto-ignite in these conditions The fuel air mixture catches fire as it is compressed When this two explosions happen one due to compression and one with the spark This causes a knocking sound Engine performance is lowered and cylinder can be damaged

20 Molecular Sieves A molecular sieve is a material containing tiny pores of a precise and uniform size that is used as an adsorbent for gases and liquids.adsorbentgasesliquids Molecules small enough to pass through the pores are adsorbed while larger molecules are not. It is different from a common filter in that it operates on a molecular level. Moleculesadsorbed This is used for separating the straight chains from the branched.

Download ppt "Developing fuels. Why burn it? Come up with a definition and description, uses AND equation for COMBUSTION of octane." 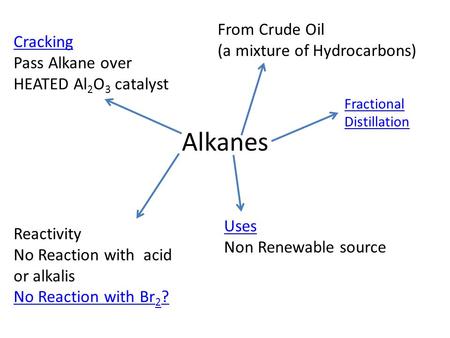 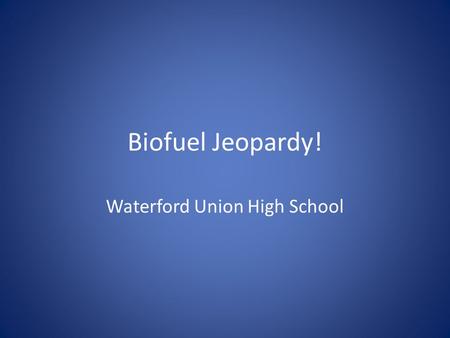 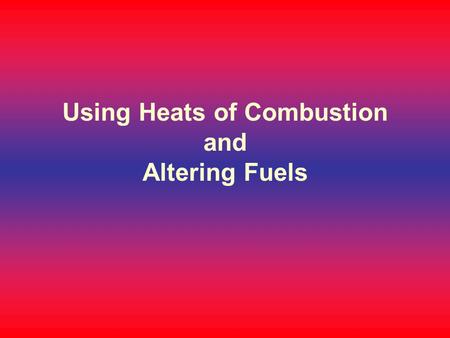 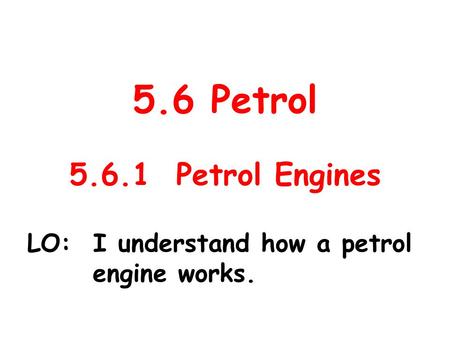 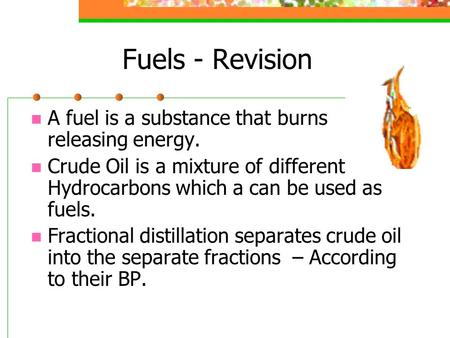