Presentation on theme: "Mr. Burton 3.2 Notes Please Grab: 1. Your folder. 2. Writing Utensil. 3. Answer the following question: What type of climate do you think we live in?"— Presentation transcript:

1 Mr. Burton 3.2 Notes Please Grab: 1. Your folder. 2. Writing Utensil. 3. Answer the following question: What type of climate do you think we live in?

2 How do Geographers identify climates zones? Earth is divided into five general climate zones. –Tropical—occur near the equator, in low latitudes –Temperate—occur about halfway between the equator and the poles, in the middle latitudes –Polar—occur near the poles, in the high latitudes –Dry—occurs at many different latitudes –Highland—occurs at many different latitudes Geographers divide some climate zones into more specific climate regions. THINK-PAIR-SHARE: With a partner, identify which climate you feel we live in and why. (2 minutes)

3 Tropical Climates vs. Dry Climate At the equator Warm, muggy and rainy year-round Temperatures average 80  F. Rainfall ranges from 70 to 450 inches. Some areas have monsoons, seasonal winds that bring either dry or moist air. Can support lush tropical rain forests that host a great diversity of plant and animal life North and south away from the equator Long, hot, dry season followed by short periods of rain Temperatures are hot in the summer, cooler in the winter. Can support savannas—areas of tall grasses and scattered trees and shrubs

4 Dessert and Steppe Climate Earth’s hottest and driest climate Receive less than 10 inches of rain a year Temperatures can reach as high as 130  F. Only very hardy plants and animals can live in these conditions. Semidry grasslands or prairies—called steppes Often border deserts Receive slightly more rain than deserts Short grasses are most common plants, but shrubs and trees grow along streams and rivers.

5 Temperate Climates Mild and tend to have four seasons –Warm or hot summers –Cool or cold winters Occur in the middle latitudes, the regions halfway between the equator and the poles

7 Polar climates are cold and dry, while highland climates change with elevation. Subarctic Climate Occurs mainly in Northern hemisphere south of Arctic Ocean Winters are long and bitterly cold; summers short and cool Below freezing half the year Tundra Climate Coastal areas along the Arctic Ocean Long, bitterly cold winters In some parts is permafrost, or permanently frozen layers of soil Ice Cap Climate North and South poles Temperature lows of more than - 120  F Snow and ice remain year-round, but little precipitation Highland Climate Found on mountains Includes polar climates plus others; several climates in one As you go up a mountain, temperatures drop and plant life grows sparser.

Download ppt "Mr. Burton 3.2 Notes Please Grab: 1. Your folder. 2. Writing Utensil. 3. Answer the following question: What type of climate do you think we live in?" 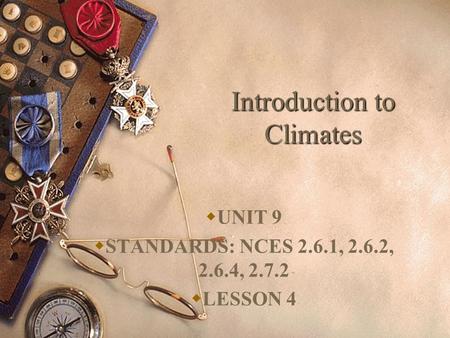 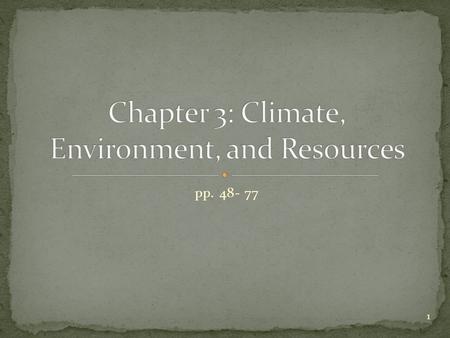 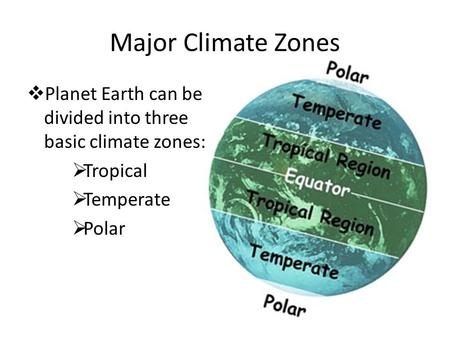 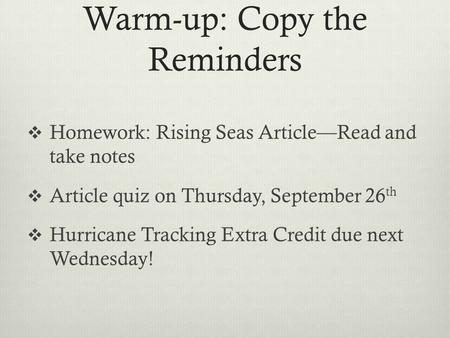 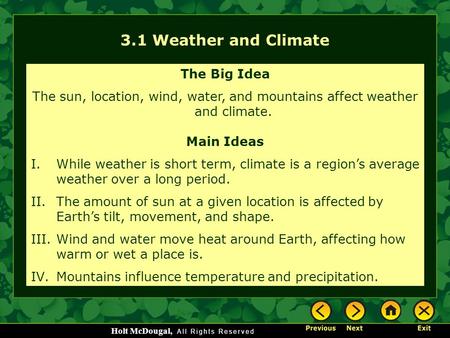