Presentation on theme: "The rise of cognitive factors The end of behaviorism was not dramatic or sudden. Instead, the various behavioral theories were slowly being replaced with."— Presentation transcript:

1 The rise of cognitive factors The end of behaviorism was not dramatic or sudden. Instead, the various behavioral theories were slowly being replaced with more dynamic, and usually more accurate, cognitive explanations of human behavior. Early attempts at incorporating cognitive factors in the acquisition of new behaviors, “Social Learning Theories,” is a clear example of how cognitive approaches replaced behavioral approaches to learning.

5 Albert Bandura (1925 - ) Our first still-alive iconic figure. He was impressed by Miller and Dollard’s “matched dependent” behavior theory, but also saw several problems with this explanation. According to their theory, modeling of behavior does not take place unless the observer imitates the model’s behavior and is rewarded for doing so.

6 Observational Learning: Bandura’s Response to Miller and Dollard Observational learning, or “modeling,” according to Bandura occurs when one person learns by observing the behaviors – including results of those behaviors – of others. Consistent with Tolman’s theory of purposeful behavior, Bandura took the cognitive approach that learning occurred without a behavioral trial- and-error phase. Bandura’s theory is supported by numerous empirical studies on observational learning. The “bobo-doll” studies are the most famous.

7 The bobo-doll They have a weight at the bottom, making them “pop-up” when they get knocked over. Bobo-dolls are inflated air-bags, about three feet tall.

8 The bobo-doll studies In the first studies, Bandura made a video of a young female student beating up the bobo doll. This included specific acts, such as saying “sockeroo” when hitting the doll. Bandura showed the film to kids, then let them play in a room which had a bobo doll. The children imitated the model’s behavior very precisely. At first, the bobo doll studies showed that behavioral approaches to learning did not fully explain modeling. Subsequent studies, however, were made more complex, and more revealing.

9 Bobo doll studies (cont.) Bandura changed many parts of the presentation of the bobo-doll videos to the kids. This included rewards and punishments of behavior, using different ages and genders, and in one case, using real people as bobo dolls. Some specific findings: > punishment caused a slight decrease in modeling > rewards did not increase modeling > Similarities between the model and observer, particularly same-gender, increased the modeling behavior. The significance of these findings was profound …

10 Social Learning Theory Bandura concluded that his studies showed four underlying factors of modeling behavior: 1. Attention is needed for learning to occur, and the findings fit logical assumptions. – The model can increase attention by being colorful, dramatic, etc. – Distractions can be internal (sleepy, hyper) and external (competing stimuli).

12 Social Learning Theory 3. Reproduction – Going “beyond daydreaming,” the person must translate the images and mental descriptions into real behaviors. – We must be able to imitate the behavior. It is hard to model a basketball player’s slam-dunk. – If we can imitate the behavior, we can improve our “performance” by mere mental rehearsal of the behavior. (cognitive rehearsal)

13 Social Learning Theory 4. Motivation – Even with the other three factors of modeling kicking in, behavior will not be imitated unless a motive is present. E.G., past reinforcement (from basic behaviorism) – Promised reinforcement – imagined – Vicarious reinforcement – model is reinforced Reinforcement is better than punishment, as punishment can “backfire.” This distinguishes learning from behavior.

18 Self Efficacy Bandura has reconceptualized reinforcement in his more recent writings. – He now says that the individual is controlled by reinforcements only to the extent that he or she is aware of them, values their significance in his or her life, and anticipates their eventual application. – Self efficacy simply refers to an individual’s belief in his or her ability to carry out a particular course of action.

Download ppt "The rise of cognitive factors The end of behaviorism was not dramatic or sudden. Instead, the various behavioral theories were slowly being replaced with." 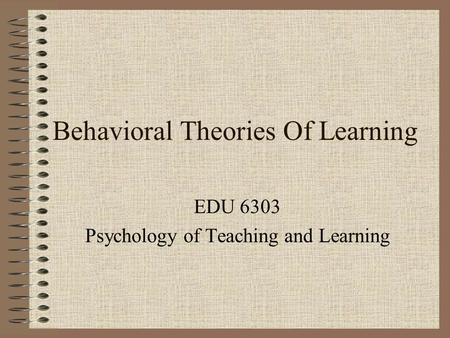 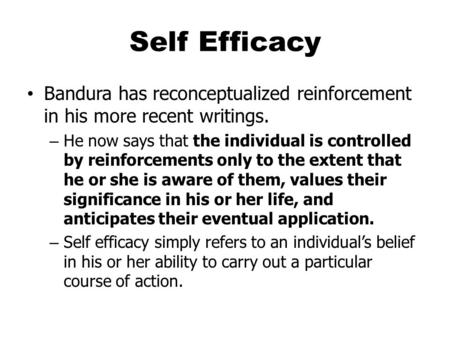 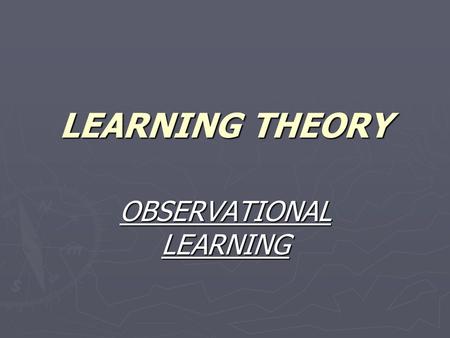 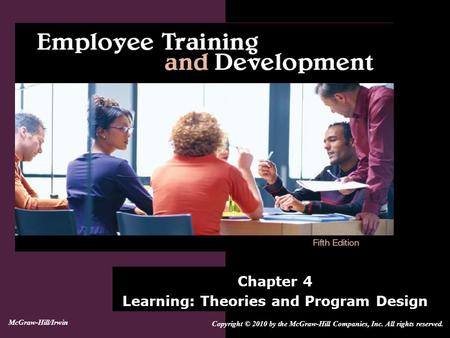 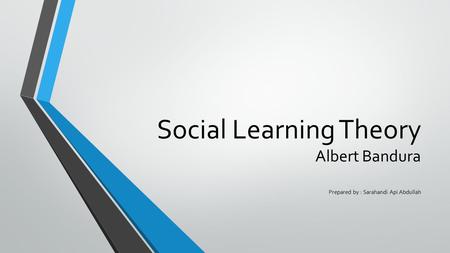 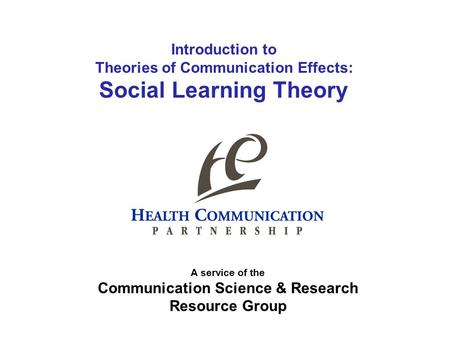 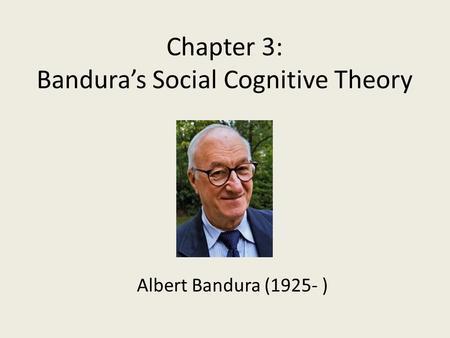 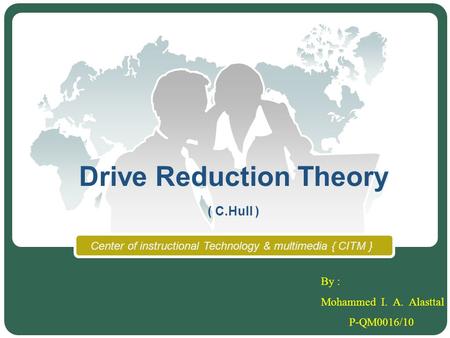 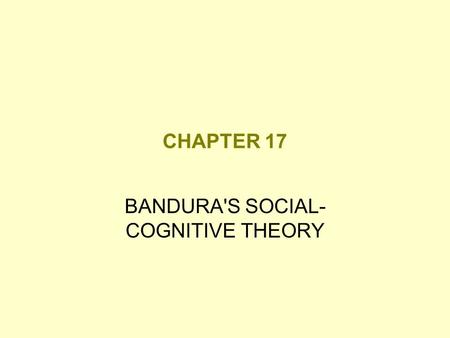