2 What is an Ion An ion is any atom or combination of atoms that has a charge, negative or positive. An ion is formed when electrons are add or taken away from an atom. They are never formed by protons being added or removed, NEVER. Opposite charges of atoms attract each other.

3 Why do Ions form? Ions form because atoms want to have a complete octet. An Octet is 8 electrons in the outer energy level or shell. How can we make complete shells?

6 Table Salt Sodium and Chlorine have equal and opposite charges. They “attract” and cling together in a strong ionic bond. Ionic bonds form between metal and nonmetal atoms

7 Why Ionic Bonds Form Ionic bonds form only between metals and nonmetals. That’s because metals “want” to give up electrons, and nonmetals “want” to gain electrons. Look at the Lewis Dots that you drew on your Periodic Table & think about the Octet Rule Alkali Metals (#1) bond with Halogens (#17) Predict which might bond with Alkaline Earth Metals Alkaline Earth Metals (#2) bond with the Oxygen Family (#16)

8 Energy and Ionic Bonds Energy holds the electrons in orbit around the nucleus Energy is needed to remove valence electrons from one atom and attach them to another These ionic bonds are very strong and difficult to break – for example, try burning salt These compounds have high melting and boiling points and are good electrical conductors. Because water has polar bonds, ionic compounds do dissolve in water.

9 Ionic Bonds form Crystals Many compounds form molecules, but ionic compounds form crystals instead. A crystal consists of many alternating positive and negative ions bonded together in a matrix.

10 Ionic Crystals In this demo, we will cause a minor chemical reaction of several metals and nonmetals: We’ll use table salt, which contains Sodium and Chlorine “Bluing” which contains Ferric hexacyanoferrate which has Iron, Nitrogen, Carbon, and Oxygen Water = Oxygen and Hydrogen

11 Ionic Crystals Demo In a glass or plastic bowl, put some pieces of charcoal, porous brick, tile, cement or sponge. Day 1: Over the base material, 10 ml of water, 10 g salt and 10 ml Mrs. Stewart's Bluing. Day 2: Add two more tablespoons of salt. Day 3: Pour into the bottom of the bowl (not directly on the base material) two tablespoons each of salt, water, and Mrs. Stewart's Bluing, and then add a few, vegetable coloring each piece.

12 Observe over the next few days… Next week, we’ll discuss covalent bonds and create a polymer. You will be asked to compare and contrast the result of these two activities. 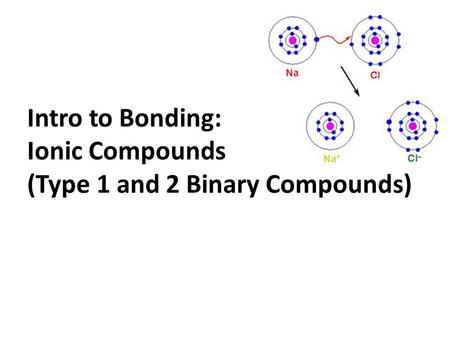 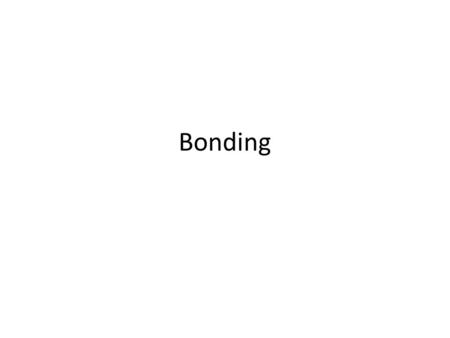