Presentation on theme: "Essay Question Answers to questions in this section should refer to the text and to such relevant features as: word choice, tone, imagery, structure, content,"— Presentation transcript:

1 Essay Question Answers to questions in this section should refer to the text and to such relevant features as: word choice, tone, imagery, structure, content, rhythm, theme, sound, ideas….. Choose a poem, which deals with a real or imaginary incident that highlights an important theme. Show how the poet makes the incident convincing and then explain how this conveys the theme.    The horror of war Incident is gas attack Vivid description of soldiers and suffering of gas victim. Contrast between title and reality of war

2 Sample Introduction The powerful protest poem, “Dulce Et Decorum Est” describes an incident from the First World War witnessed by the author, Wilfred Owen. Owen describes the terrible suffering of a group of soldiers retreating from war and the impact of a gas attack to explore the theme of the horror and inhumanity of war. I found this poem very moving as it gives a very vivid account of human suffering and the suffering caused by conflict, a topic that I feel is still very relevant today.

3 Planning Your Essay To plan you need to think about how you will divide the poem up, selecting which quotes you will analyse in each paragraph of P.C.Q.E. In your groups plan 5 paragraphs of P.C.Q.E You need to consider these factors Write a point that clearly answers the questions Choose quotes that are most clearly relate to the demands of the task Choose quotes that reflect a good overall knowledge of the WHOLE text Choose quotes that are of a length that allows you to provide some depth of analysis but does not exceed 3 lines (you may use ellipsis) Make a note of the techniques you will analyse

4 Sample Paragraph Plan Paragraph 1:
POINT: Owen opens the poem with a powerful and vivid image to engage the reader at the start of essay CONTEXT: describes shocking state of soldiers as they retreat from war QUOTE:” Bent double, like old beggars under sacks,/Knock-kneed, coughing like hags, we cursed through sludge……. All went lame, all blind;/Drunk with fatigue” EXPLANATION:Contrast with title/ use of similes/ onomatopoeia/ repetition/ metaphor

5 Exemplar P.C.Q.E The first way in which Owen portrays the character of the wounded soldier vividly is in the opening lines of the poem when the soldier is portrayed as a pathetic and isolated figure. Owen creates a gloomy mood suggesting the man’s isolation. He sat in a wheeled chair, waiting for dark, And shivered in his ghastly suit of grey, Legless, sewn short at elbow. Through the park Voices of boys rang saddening like a hymn..” The word choice of ‘wheeled chair’ creates a vivid image of the character who is the focus of the poem. It skilfully conveys how the once active soldier is now helpless and dependant on others. Owen implies the man is very depressed in the phrase, ‘waiting for dark’. Darkness has connotations of misery and death suggesting this character is now simply waiting out the rest of his life and that he may be suicidal. Enjambment is used to emphasise the source of the man’s misery, he has lost his limbs. The reference to his clothes, ‘sewn short’ creates a clear picture of the man’s pathetic appearance. It may also symbolise how his youthful, care free existence before the war has also been cut short. The contrast between the boys playing outside and the soldier effectively highlights his infirmity and his lost youth. A simile, ‘saddening like a hymn’ helps us understand how the happy voices of the boys serve only to remind the soldier of his loneliness. It is as if they are a funeral song, mourning his suffering.

6 Strengths and targets Strengths Clear linking to the task
Strong use of technical terms Good understanding of the text Clear and fluent expression Clear and detailed explanation and analysis of quotes Targets Link more clearly to the task in your point/ explanation and analysis Make greater use of technical terms e.g. simile and metaphor Work on your expression – you do not explain ideas clearly Give more detailed analysis of quotes Give a clear personal response to the text. Technical accuracy spelling/ punctuation needs work-proof read carefully

7 Writing a conclusion To write a conclusion for a critical essay there is a simple formula you can follow. Refer back to the task and evaluate Give an example to back up your evaluation Give a personal response to the text as a whole Example: Throughout ‘Disabled’ Wilfred Owen conveys the character of the wounded soldier very vividly using emotive language and imagery to great effect. The use of rhetorical questions at the end of the poem particularly apt as it highlights the sense of loss the soldier feels and expresses Owen’s anti war theme in a subtle but moving manner. This poem clearly conveys the horror of war by confronting the reader with the misery and suffering of one man in order to suggest the impact the Great War and other conflicts had on millions of others.

Download ppt "Essay Question Answers to questions in this section should refer to the text and to such relevant features as: word choice, tone, imagery, structure, content," 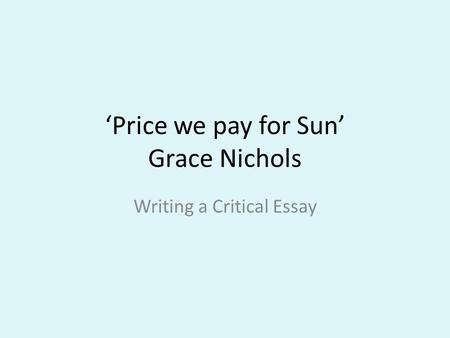 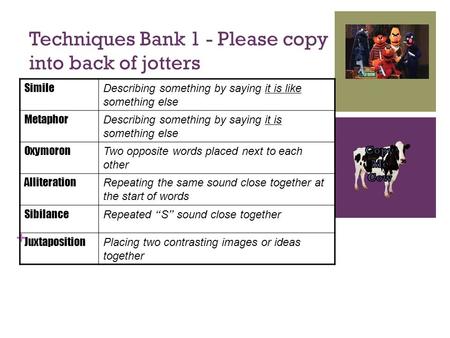 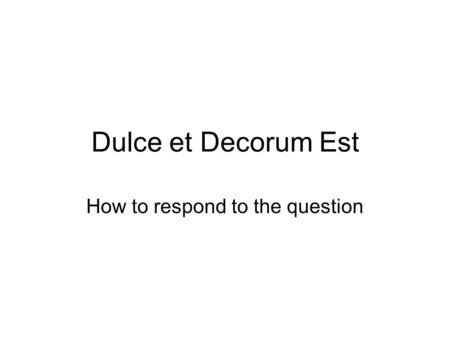 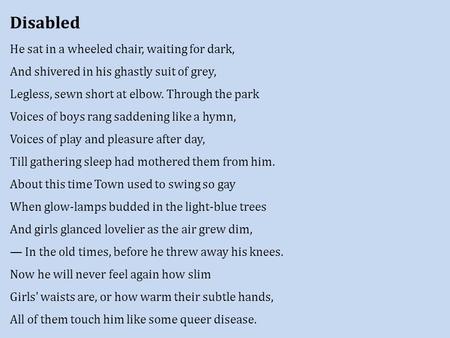 Disabled He sat in a wheeled chair, waiting for dark, And shivered in his ghastly suit of grey, Legless, sewn short at elbow. Through the park Voices of. 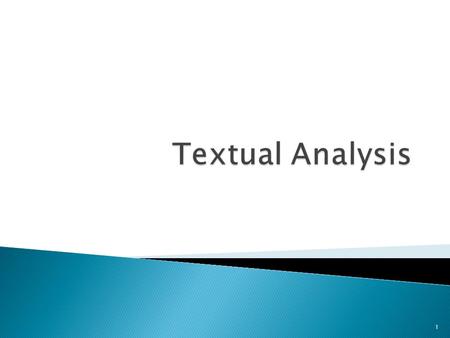 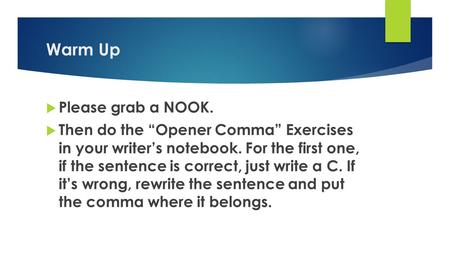 Warm Up  Please grab a NOOK.  Then do the “Opener Comma” Exercises in your writer’s notebook. For the first one, if the sentence is correct, just write. 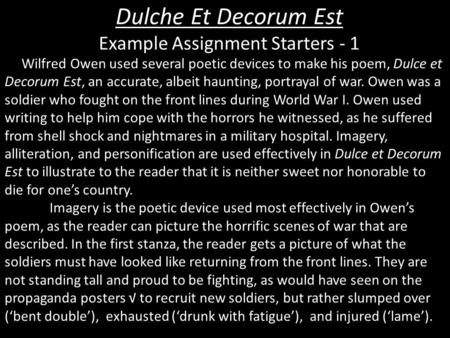 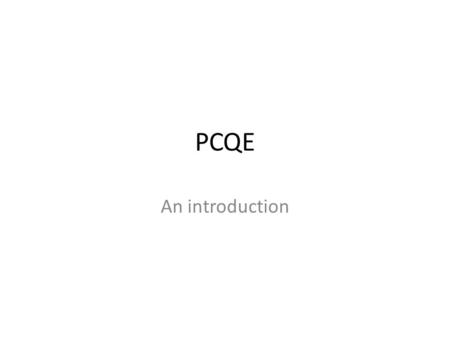 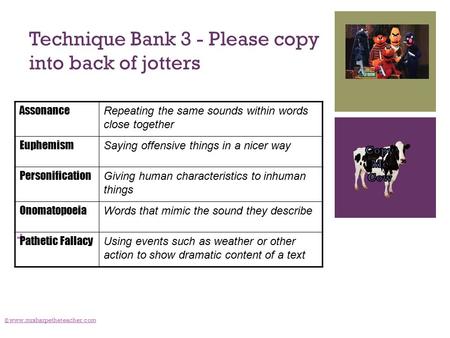 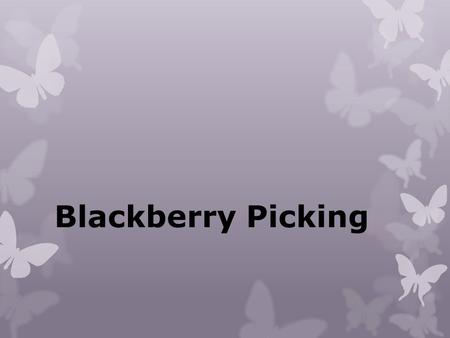 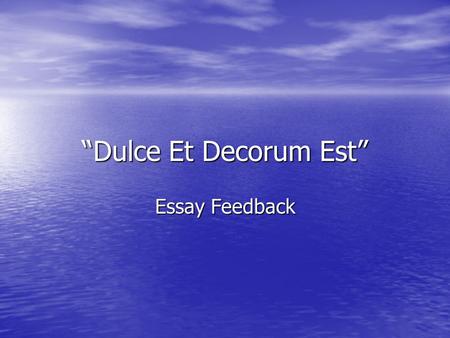 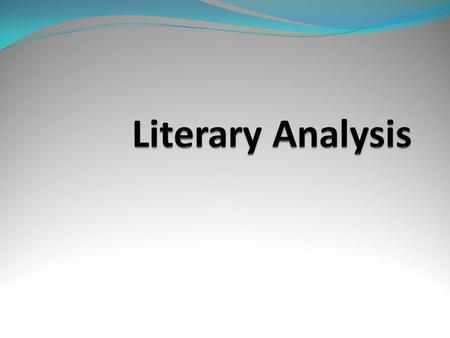 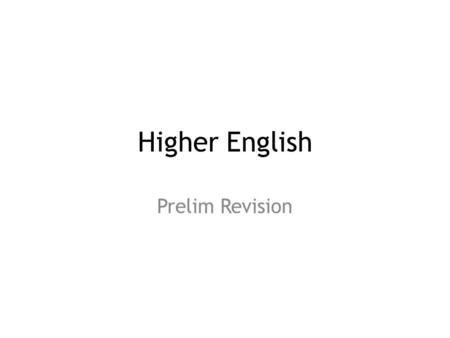 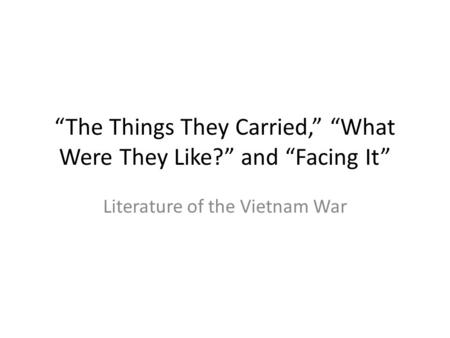 “The Things They Carried,” “What Were They Like?” and “Facing It” 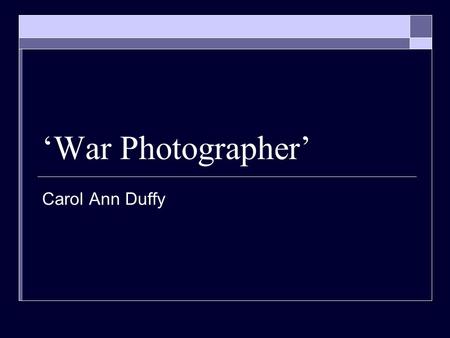