6 Older Brain Structures
The Brainstem is the oldest part of the brain, beginning where the spinal cord swells and enters the skull. It is responsible for automatic survival functions. OBJECTIVE 12| Describe the components of the brainstem and summarize the functions of the brainstem, thalamus and cerebellum.

7 Brain Stem The Medulla [muh-DUL-uh] is the base of the brainstem
It controls autonomic functions and relays nerve signals between the brain and spinal cord. respiration blood pressure heart rate reflex arcs vomiting

8 Brain Stem Pons and inside that the (Reticular Formation) is a nerve network in the brainstem that plays an important role in controlling arousal. It is involved in motor control and sensory analysis... for example, information from the ear first enters the brain in the pons. It has parts that are important for the level of consciousness and for sleep. The Reticular Formation controls: Attention Cardiac Reflexes Motor Functions Regulates Awareness Relays Nerve Signals to the Cerebral Cortex Sleep

10 Brain Stem The Thalamus [THAL-uh-muss] is the brain’s sensory switchboard, located on top of the brainstem. It directs messages to the sensory areas in the cortex and transmits replies to the cerebellum and medulla.

11 Cerebellum The “little brain” attached to the rear of the brainstem. It helps coordinate voluntary movements and balance.

13 The Limbic System The Limbic System is a doughnut-shaped system of neural structures at the border of the brainstem and cerebrum, associated with emotions such as fear, aggression and drives for food and sex. It includes the hippocampus, amygdala, and hypothalamus. OBJECTIVE 13| Describe the structures and functions of the limbic system, and explain how one of these structures controls the pituitary gland.

14 Amygdala The Amygdala [ah-MIG-dah-la] consists of two almond-shaped neural clusters linked to the emotions of fear and anger.

15 Hypothalamus The Hypothalamus lies below (hypo) the thalamus. It directs several maintenance activities like eating, drinking, body temperature, and control of emotions. It helps govern the endocrine system via the pituitary gland.

16 Reward Center Rats cross an electrified grid for self-stimulation when electrodes are placed in the reward (hypothalamus) center (top picture). When the limbic system is manipulated, a rat will navigate fields or climb up a tree (bottom picture). Sanjiv Talwar, SUNY Downstate

18 The Cerebral Cortex The intricate fabric of interconnected neural cells that covers the cerebral hemispheres. It is the body’s ultimate control and information processing center. OBJECTIVE 14| Define cerebral cortex and explain its importance fro the human brain.

19 Structure of the Cortex
Each brain hemisphere is divided into four lobes that are separated by prominent fissures. These lobes are the frontal lobe (forehead), parietal lobe (top to rear head), occipital lobe (back head) and temporal lobe (side of head). OBJECTIVE 15| Identify the four lobes of the cerebral cortex.

20 Functions of the Cortex
The Motor Cortex is the area at the rear of the frontal lobes that control voluntary movements. The Sensory Cortex (parietal cortex) receives information from skin surface and sense organs. OBJECTIVE 16| Summarize some of the findings on the functions of the motor cortex and the sensory cortex, and discuss the importance of the association areas.

21 Visual Function The functional MRI scan shows the visual cortex is active as the subject looks at faces.

22 Auditory Function The functional MRI scan shows the auditory cortex is active in patients who hallucinate.

24 Language Aphasia is an impairment of language, usually caused by left hemisphere damage either to Broca’s area (impaired speaking) or to Wernicke’s area (impaired understanding). OBJECTIVE 17| Describe the five brain areas that would be involved if you read this sentence aloud.

26 Can you make a purple circle with a cross in the middle?

32 Splitting the Brain A procedure in which the two hemispheres of the brain are isolated by cutting the connecting fibers (mainly those of the corpus callosum) between them. Corpus Callosum

35 The Spinal Cord Complex cable of nerves that connects brain to rest of the body Carries motor impulses from the brain to internal organs and muscles Carries sensory information from extremities and internal organs to the brain 400,000 people a year in US either partial or complete paralysis. 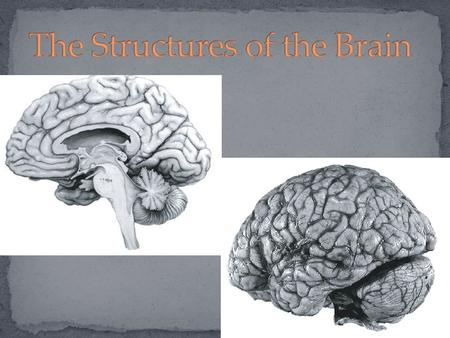 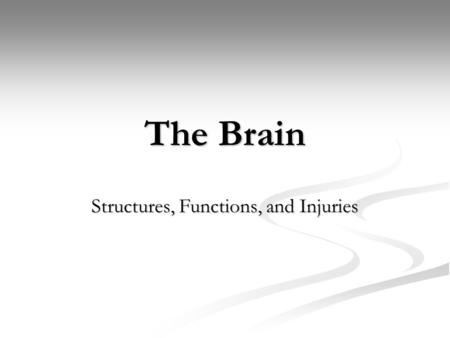