Presentation on theme: "What kind of a Graphical Model is the Brain?"— Presentation transcript:

2 Overview We will combine two types of unsupervised neural net:
2 We will combine two types of unsupervised neural net: Undirected model = Boltzmann Machine Directed model = Sigmoid Belief Net Boltzmann Machine learning is made efficient by restricting the connectivity & using contrastive divergence. Restricted Boltzmann Machines are shown to be equivalent to infinite Sigmoid Belief Nets with tied weights. This equivalence suggests a novel way to learn deep directed belief nets one layer at a time. This new method is fast and learns very good models, provided we do some fine-tuning afterwards We can now learn a really good generative model of the joint distribution of handwritten digit images and their labels. It is better at recognizing handwritten digits than discriminative methods like SVM’s or backpropagation.

3 Stochastic binary neurons
3 These have a state of 1 or 0 which is a stochastic function of the neuron’s bias, b, and the input it receives from other neurons. 1 0.5

5 5 Sigmoid Belief Nets It is easy to generate an unbiased example at the leaf nodes. It is typically hard to compute the posterior distribution over all possible configurations of hidden causes. Given samples from the posterior, it is easy to learn the local interactions Hidden cause Visible effect

6 The learning rule for sigmoid belief nets
6 The learning rule for sigmoid belief nets Suppose we could observe the states of all the hidden units when the net was generating an observed data-vector. This is equivalent to getting samples from the posterior distribution over hidden configurations given the observed datavactor. For each node, it is easy to maximize the log probability of its observed state given the observed states of its parents. j i probability of i turning on given the states of its parents

8 How a Boltzmann Machine models data
8 How a Boltzmann Machine models data It is not a causal generative model (like a sigmoid belief net) in which we first generate the hidden states and then generate the visible states given the hidden ones. Instead, everything is defined in terms of energies of joint configurations of the visible and hidden units. hidden units visible units

14 Restricted Boltzmann Machines
14 We restrict the connectivity to make inference and learning easier. Only one layer of hidden units. No connections between hidden units. In an RBM, the hidden units are conditionally independent given the visible states. It only takes one step to reach thermal equilibrium when the visible units are clamped. So we can quickly get the exact value of : hidden j i visible

18 The weights learned by the 100 hidden units
18 Each hidden unit is connected to all the pixels, but it learns mostly local features. By adding together a subset of these features we can reconstruct any 2 very accurately White = positive weight Black = negative weight

19 19 A surprising relationship between Boltzmann Machines and Sigmoid Belief Nets Directed and undirected models seem very different. But there is a special type of multi-layer directed model in which it is easy to infer the posterior distribution over the hidden units because it has complementary priors. This special type of directed model is equivalent to an undirected model. At first, this equivalence just seems like a neat trick But it leads to a very effective new learning algorithm that allows multilayer directed nets to be learned one layer at a time. The new learning algorithm resembles boosting with each layer being like a weak learner.

24 Learning by dividing and conquering
24 Learning by dividing and conquering Re-weighting the data: In boosting, we learn a sequence of simple models. After learning each model, we re-weight the data so that the next model learns to deal with the cases that the previous models found difficult. There is a nice guarantee that the overall model gets better. Projecting the data: In PCA, we find the leading eigenvector and then project the data into the orthogonal subspace. Distorting the data: In projection pursuit, we find a non-Gaussian direction and then distort the data so that it is Gaussian along this direction.

25 Another way to divide and conquer
25 Re-representing the data: Each time the base learner is called, it passes a transformed version of the data to the next learner. Can we learn a deep, dense DAG one layer at a time, starting at the bottom, and still guarantee that learning each layer improves the overall model of the training data? This seems very unlikely. Surely we need to know the weights in higher layers to learn lower layers?

28 Multilayer contrastive divergence
28 Multilayer contrastive divergence Start by learning one hidden layer. Then re-present the data as the activities of the hidden units. The same learning algorithm can now be applied to the re-presented data. Can we prove that each step of this greedy learning improves the log probability of the data under the overall model? What is the overall model?

29 A simplified version with all hidden layers the same size
29 The RBM at the top can be viewed as shorthand for an infinite directed net. When learning W1 we can view the model in two quite different ways: The model is an RBM composed of the data layer and h1. The model is an infinite DAG with tied weights. After learning W1 we untie it from the other weight matrices. We then learn W2 which is still tied to all the matrices above it. h3 h2 h1 data

30 30 Why the hidden configurations should be treated as data when learning the next layer of weights After learning the first layer of weights: If we freeze the generative weights that define the likelihood term and the recognition weights that define the distribution over hidden configurations, we get: Maximizing the RHS is equivalent to maximizing the log prob of “data” that occurs with probability

31 Why greedy learning works
31 Why greedy learning works Each time we learn a new layer, the inference at the layer below becomes incorrect, but the variational bound on the log prob of the data improves. Since the bound starts as an equality, learning a new layer never decreases the log prob of the data, provided we start the learning from the tied weights that implement the complementary prior. Now that we have a guarantee we can loosen the restrictions and still feel confident. Allow layers to vary in size. Do not start the learning at each layer from the weights in the layer below.

32 32 Back-fitting After we have learned all the layers greedily, the weights in the lower layers will no longer be optimal. We can improve them in two ways: Untie the recognition weights from the generative weights and learn recognition weights that take into account the non-complementary prior implemented by the weights in higher layers. Improve the generative weights to take into account the non-complementary priors implemented by the weights in higher layers. What algorithm should we use for fine-tuning the weights that are learned greedily? We use a contrastive version of the “wake-sleep” algorithm. This is explained in the written paper. It will not be described in the talk.

33 A neural network model of digit recognition
33 A neural network model of digit recognition The top two layers form a restricted Boltzmann machine whose free energy landscape models the low dimensional manifolds of the digits. The valleys have names: 2000 top-level units 10 label units 500 units The model learns a joint density for labels and images. To perform recognition we can start with a neutral state of the label units and do one or two iterations of the top-level RBM. Or we can just compute the free energy of the RBM with each of the 10 labels 500 units 28 x 28 pixel image

34 34 Samples generated by running the top-level RBM with one label clamped. There are 1000 iterations of alternating Gibbs sampling between samples.

36 36 How well does it discriminate on MNIST test set with no extra information about geometric distortions? Up-down net with RBM pre-training + CD % SVM (Decoste & Scholkopf) % Backprop with 1000 hiddens (Platt) % Backprop with >300 hiddens % Separate hierarchy of RBM’s per class % Learned motor program extraction ~1.8% K-Nearest Neighbor ~ 3.3% Its better than backprop and much more neurally plausible because the neurons only need to send one kind of signal, and the teacher can be another sensory input.

38 38 Samples generated by running top-level RBM with one label clamped. Initialized by an up-pass from a random binary image. 20 iterations between samples.

39 Learning with realistic labels
39 2000 top-level units 10 label units 500 units This network treats the labels in a special way, but they could easily be replaced by an auditory pathway. 500 units 28 x 28 pixel image

40 Learning with auditory labels
40 Learning with auditory labels Alex Kaganov replaced the class labels by binarized cepstral spectrograms of many different male speakers saying digits. The auditory pathway then had multiple layers, just like the visual pathway. The auditory and visual inputs shared the top level layer. After learning, he showed it a visually ambiguous digit and then reconstructed the visual input from the representation that the top-level associative memory had settled on after 10 iterations. “six” “five” reconstruction original visual input reconstruction

41 A different way to capture low-dimensional manifolds
41 Instead of trying to explicitly extract the coordinates of a datapoint on the manifold, map the datapoint to an energy valley in a high-dimensional space. The learned energy function in the high-dimensional space restricts the available configurations to a low-dimensional manifold. We do not need to know the manifold dimensionality in advance and it can vary along the manifold. We do not need to know the number of manifolds. Different manifolds can share common structure. But we cannot create the right energy valleys by direct interactions between pixels. So learn a multilayer non-linear mapping between the data and a high-dimensional latent space in which we can construct the right valleys.

44 The flaws in the wake-sleep algorithm
The recognition weights are trained to invert the generative model in parts of the space where there is no data. This is wasteful. The recognition weights follow the gradient of the wrong divergence. They minimize KL(P||Q) but the variational bound requires minimization of KL(Q||P). This leads to incorrect mode-averaging The posterior over the top hidden layer is very far from independent because the independent prior cannot eliminate explaining away effects.

45 The up-down algorithm: A contrastive divergence version of wake-sleep
Replace the top layer of the DAG by an RBM This eliminates bad variational approximations caused by top-level units that are independent in the prior. It is nice to have an associative memory at the top. Replace the ancestral pass in the sleep phase by a top- down pass starting with the state of the RBM produced by the wake phase. This makes sure the recognition weights are trained in the vicinity of the data. It also reduces mode averaging. If the recognition weights prefer one mode, they will stick with that mode even if the generative weights like some other mode just as much.

46 Mode averaging If we generate from the model, half the instances of a 1 at the data layer will be caused by a (1,0) at the hidden layer and half will be caused by a (0,1). So the recognition weights will learn to produce (0.5,0.5) This represents a distribution that puts half its mass on very improbable hidden configurations. Its much better to just pick one mode and pay one bit. -20 minimum of KL(Q||P) minimum of KL(P||Q) P

47 The receptive fields of the first hidden layer

48 The generative fields of the first hidden layer

Download ppt "What kind of a Graphical Model is the Brain?" 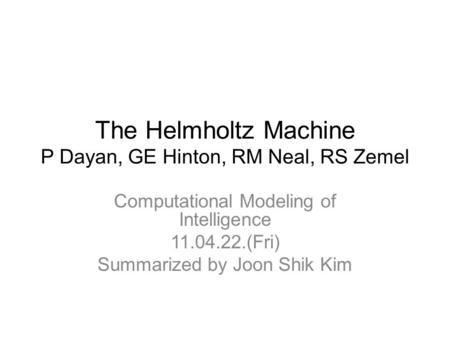 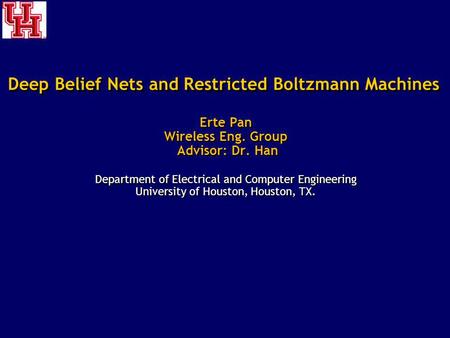 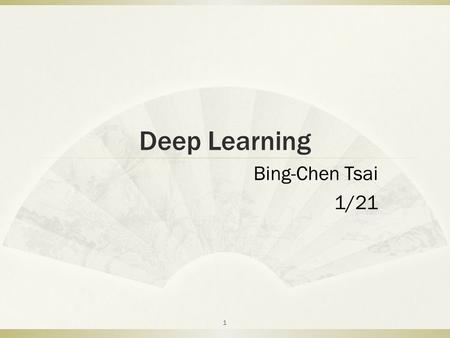 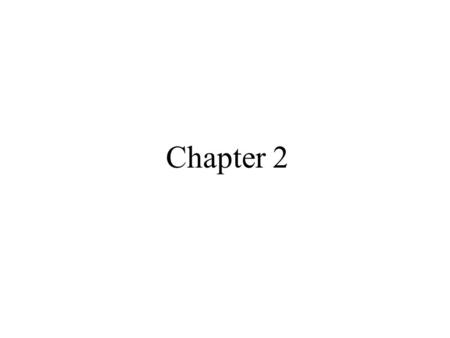 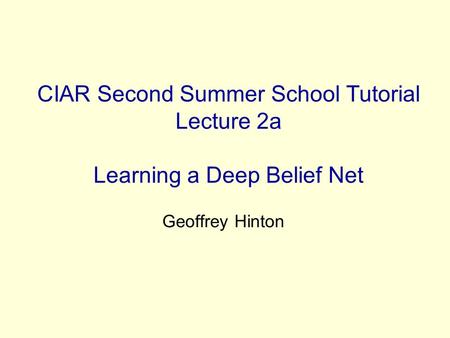 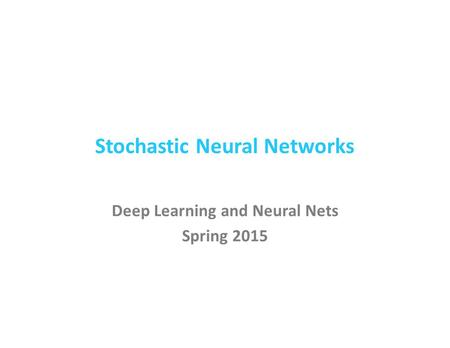 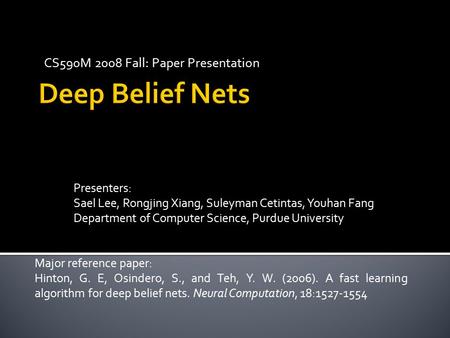 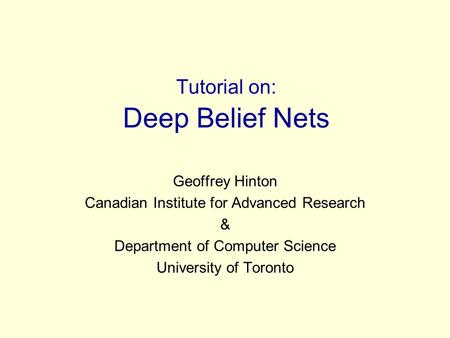 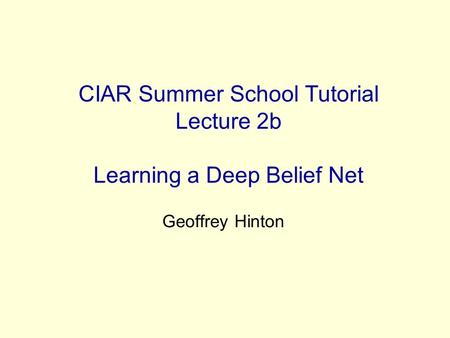 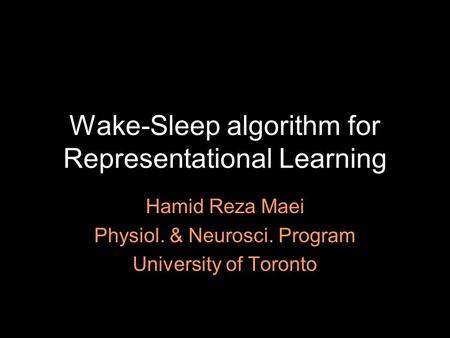 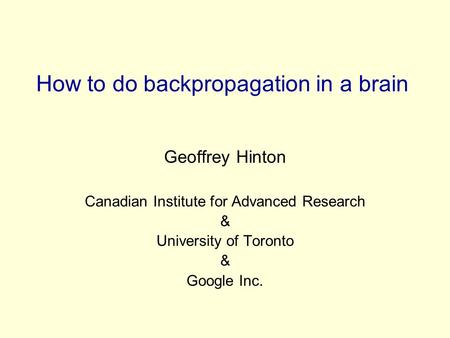 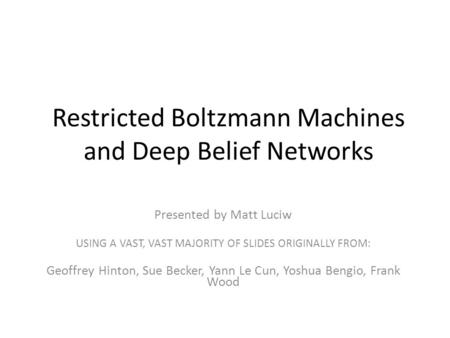 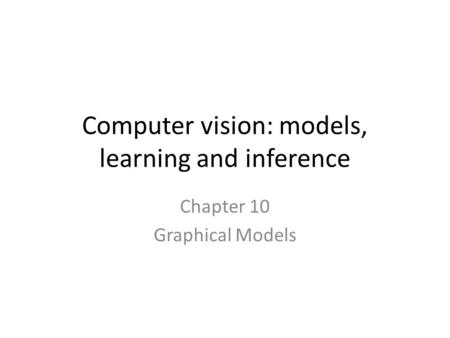 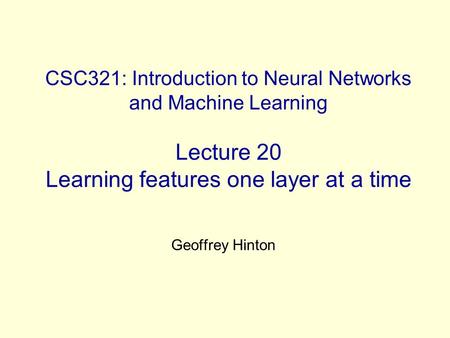 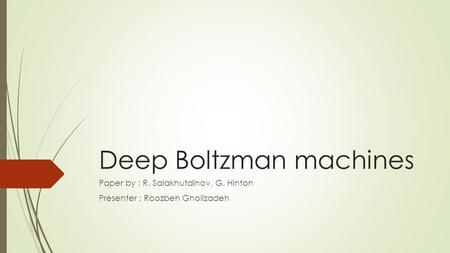 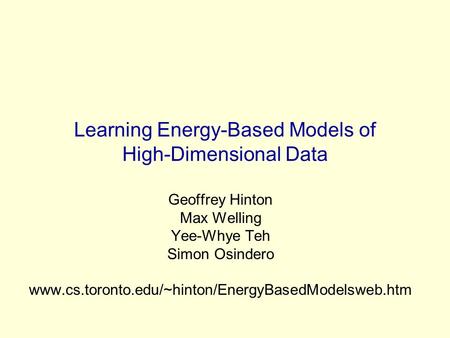 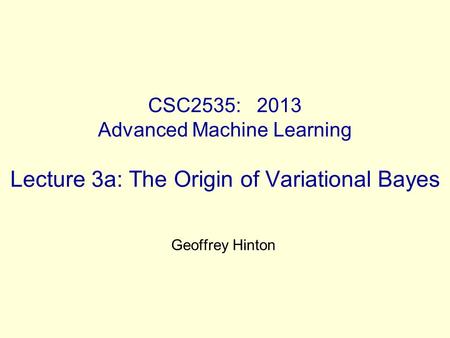 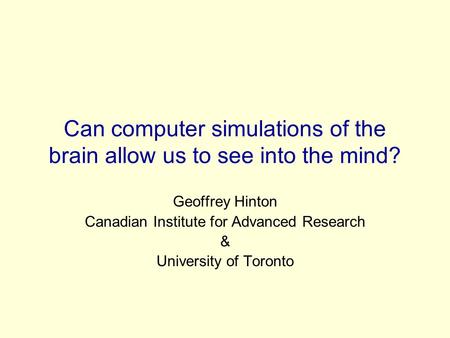 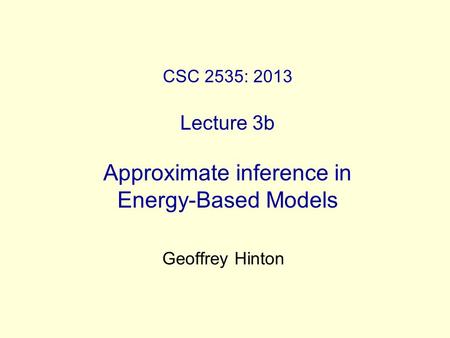