4 Ceremonies Parade Ceremony –A parade is a review with honors. –Suggested Checklist for Commander of Troops. Preparation for Parade

5 Ceremonies Formations Adjutant’s Call –The adjutant takes a position on the final line six paces to the right of the first unit, faces down line, and begins the ceremony by commanding the band to sound Adjutant’s Call. March On Formation of Troops for Parade.

7 Ceremonies Guidon Bearer –Guidon Bearers Execute right face while the squadron is dressed. Guides Post –After all elements come on line, the band stops playing, the adjutant marches at adjutant’s cadence to a point between the commander and the front line of commanders. Sound Off or Trooping the Lines –After giving the troops parade rest, the adjutant commands SOUND OFF.

9 Ceremonies Presentation of Troops –A distinctive feature of the parade ceremony or review is the formal presentation of the troops to the commander of troops. Honors –Special military honors are reserved for military and national dignitaries who participate in ceremonies.

12 Ceremonies March in Review –On command PASS IN REVIEW band changes direction by executing column right, moves out on the route of march and comes to a halt.

13 Ceremonies Commander of Troops and Staff. –Commanders reviewing their own troops designate another officer as commander of troops. –Staff members do not salute with the commander when troops are presented. –Manner in which staff changes post. –When staff consists of more than two members.

16 Ceremonies Relay of Commands to Troops –If there is only one group participating in the ceremony, the adjutant and commander of troops give commands directly to the troops.

18 Ceremonies Raising the Flag –A detail consisting of an NCO and two Airmen hoists flag when practical. –Detail is formed in line with the NCO carrying the flag in the center.

19 Ceremonies Retreat Ceremony –Retreat ceremony serves a twofold purpose. It signals the end of the official duty day. It serves as a ceremony for paying respect to the flag. –The Ceremony may take place at the squadron area, on the base parade ground, or in the vicinity of the flagstaff. Events Accompanying Retreat Ceremony at the Flagstaff

22 Ceremonies Formal Change of Command –Primary purpose of change of command ceremony is to allow subordinates to witness the formality of command change from one officer to another.

25 Ceremonies Manual of the Colors. (Continued) –Position of the Flag at Parade Rest.

28 Ceremonies Courtesies to the U.S. Flag –Small flags and flags on halfstaff are not saluted. –Cased and folded flags are not saluted. Saluting When the National Anthem or to the Colors is played. –The U.S. Flag is symbolic of the United States and the principles for which it stands. –The National Anthem is a declaration of reverence and loyalty to the United States with the flag as an emblem. 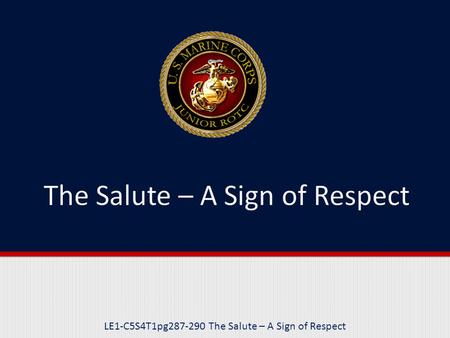 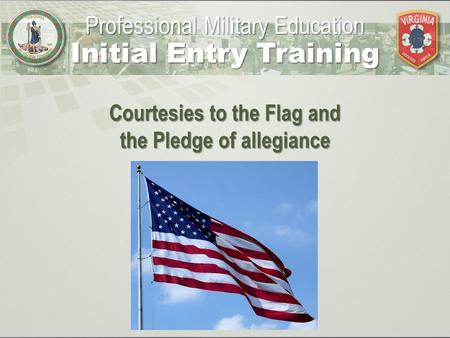 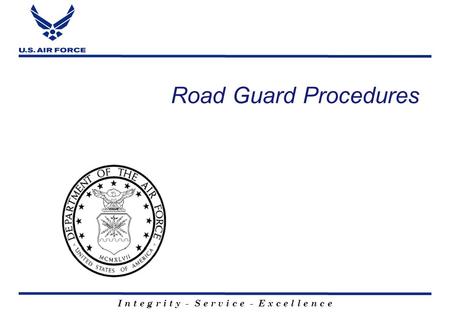 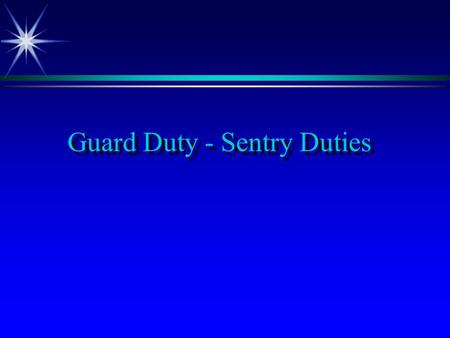 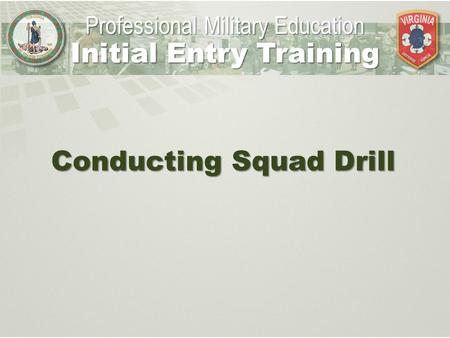 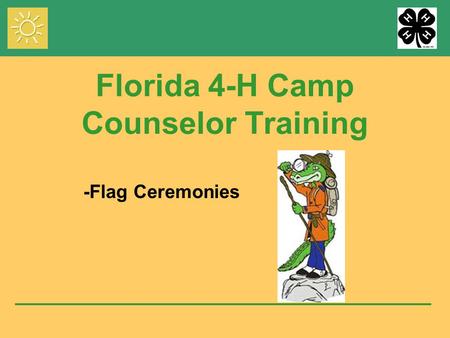 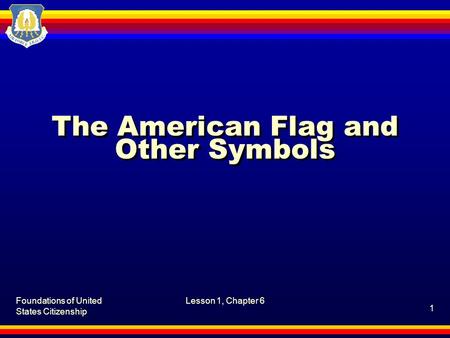 Foundations of United States Citizenship Lesson 1, Chapter 6 1 The American Flag and Other Symbols. 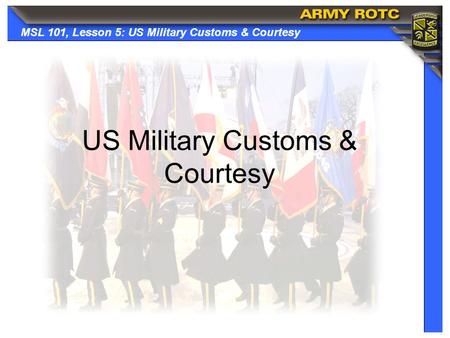 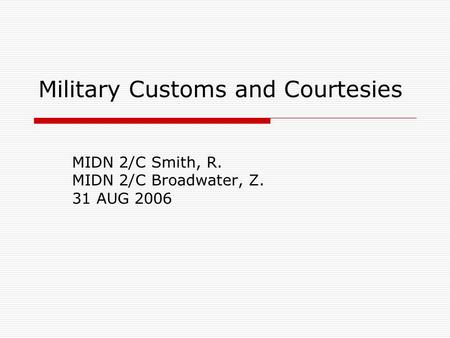 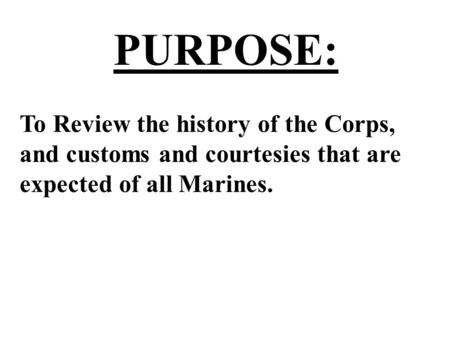 PURPOSE: To Review the history of the Corps, and customs and courtesies that are expected of all Marines. 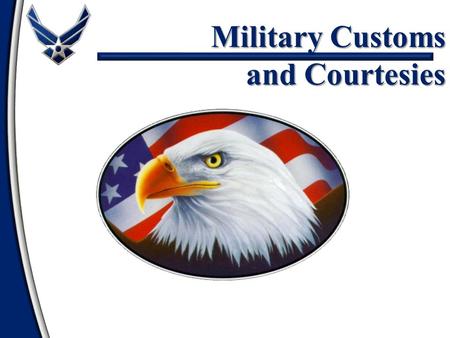 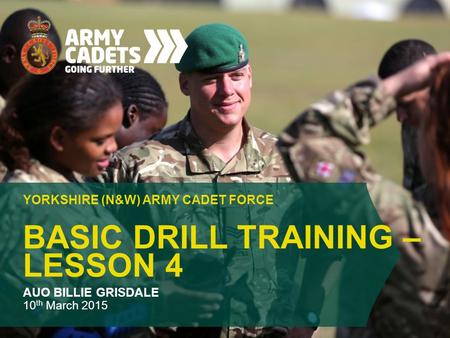 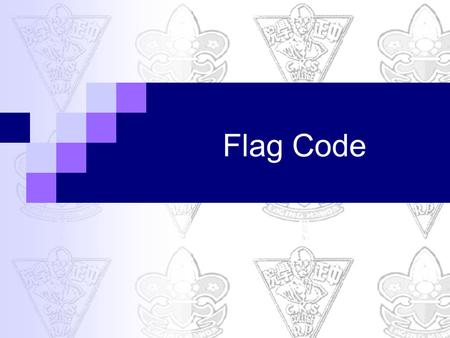 Flag Code. National Flag represents an entire country and it’s people It’s important that everyone should know the proper respect and care due to his. 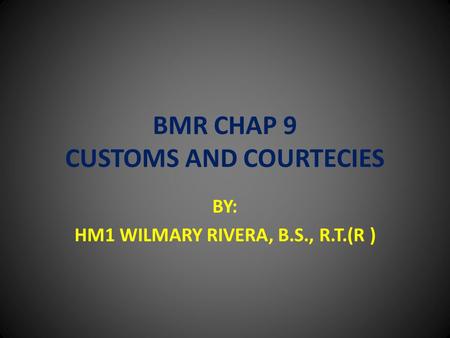 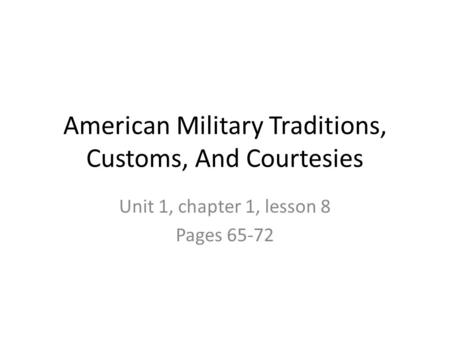 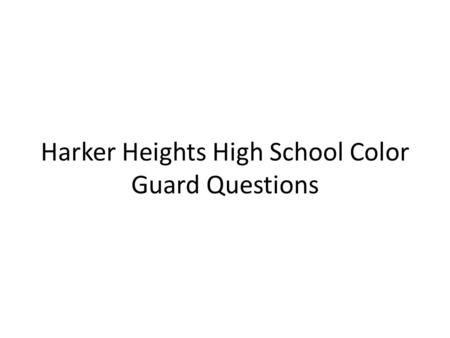 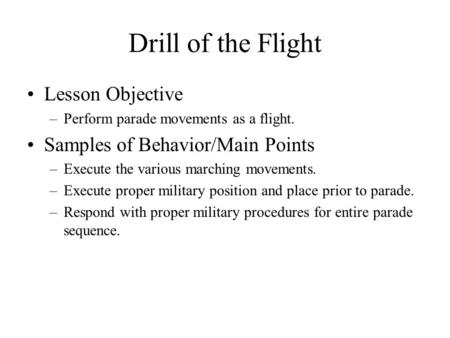