Morphology, Part 2 September 26, 2012. Quick Write Thoughts Is it realistic to portray Mr. Burns as having a dictionary inside his head?

Presentation on theme: "Morphology, Part 2 September 26, 2012. Quick Write Thoughts Is it realistic to portray Mr. Burns as having a dictionary inside his head?"— Presentation transcript:

2 Quick Write Thoughts Is it realistic to portray Mr. Burns as having a dictionary inside his head?

7 In Our Last Episode Words and morphemes (meaningful “word parts”) Free and bound morphemes Simple and complex words Affixes and roots Word-formation rules Affixes attach to a root (or base) of a particular lexical category… and create a new word.

8 Layers of Words Words that are formed through the addition of multiple affixes have a layered, or hierarchical structure. One (ugly) way to represent this structure is through bracket notation: [root][construct] [[affix] + [root]][[re-] + [construct]](=base) [[base] + [affix]][[[re-] + [construct]] + [-ion]] WORDreconstruction

9 Tree Structures In this class, we’ll primarily stick with tree diagrams to represent word structure. (because they look better and are easier to read) reconstructionundesire able Tree terminology: branches nodes: where two branches meet nodes represent constituents of the word

10 Building the Perfect Beasts To accurately capture all of the facts of word formation… tree structures should represent the lexical categories of all constituents at each node in the tree. Noun Adj Verb Adj AffVerbAffAffVerb Aff [re-][construct][-ion][un-][desire] [-able]

13 Ambiguity Some complex words can have more than one interpretation Different derivations can result in different interpretations Example: “unlockable” Note: [un-] can attach to both adjectives and verbs [-able] attaches to verbs and creatives adjectives

22 A Note on Word Forms Morphologists use the term lexeme to refer to a group of related word forms. wait, waits, waited, waiting, etc. The canonical form of the lexeme is called the lemma. = the “headword” in a dictionary. Inflectional affixes relate a lexeme to its various forms. Derivational affixes relate one lexeme to another lexeme. lemma word forms different lexeme

Download ppt "Morphology, Part 2 September 26, 2012. Quick Write Thoughts Is it realistic to portray Mr. Burns as having a dictionary inside his head?" 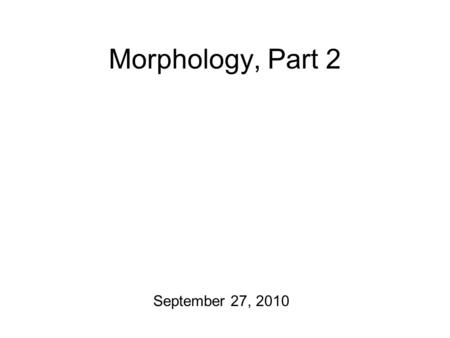 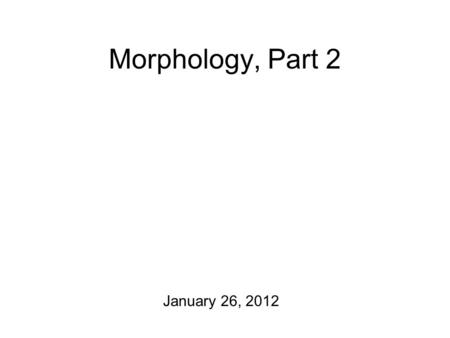 Morphology, Part 2 January 26, Mr. Burns Quick Write Is it realistic to portray Mr. Burns as having a dictionary inside his head?