2 2 The White Paper 2001  The 2001 White paper proposed almost 60 measures designed to implement a transport system capable of restoring the balance between different modes, revitalising the railways, promoting sea and waterway transport and controlling the increase in air transport.  The White Paper was providing a response to the sustainable development strategy adopted by the Göteborg European Council in June 2001.  This communication reaffirms the principles of 2001, which guide European transport policy by responding to the economic, social and environmental needs of society.  This sector provides 7% of GDP in the EU and 5% of jobs.  The mobility of goods and citizens, apart from being a right, also creates cohesion and is an essential element of the competitiveness of European industry and services.

3 3 Transport policy objectives  It is therefore necessary to: divorce mobility from its side effects, which are congestion, accidents and pollution; optimise the potential of each mode of transport. Some modes, including waterborne transport, do not reach their full capacity; promote green propulsion and encourage the use of more environmentally friendly, energy efficient and safer transport; promote co-modality, i.e. the efficient use of different modes of transport on their own and in combinations, resulting in an optimal use of resources.  In order to succeed in meeting these objectives, this communication identifies four pillars for transport policy, namely: the mobility of people and businesses throughout the Union; environmental protection, the security of energy supply, promoting minimum labour standards and protecting passengers and citizens; innovation, which supports the implementation of the two previous objectives by making sector activity more efficient and sustainable; action on the world stage so that other countries can share in these objectives.

4 4 The changing context  The text does emphasise that the context of transport in the EU has changed: enlargement has given the EU a continental dimension. the transport industry has changed. transport is fast becoming a high-technology industry. international environmental commitments, including those under the Kyoto Protocol, must be integrated into transport policy; transport policy must continue to attain the objectives of the European Energy policy : transport accounts for 30% of total energy consumption in the EU, with oil dependency reaching 98%. the international context has changed. The threat of terrorism has impacted on the transport sector. At the same time, economic globalisation has affected trade flows and increased demand, particularly in emerging economies; European governance is evolving. The basic legal framework of the internal market has largely been established, and much now rests on its effective implementation in the field.

5 5 A new challenge  Road congestion has escalated and is now costing the EU 1% of GDP. There has also been a sustained increase in air traffic and its impact on the environment.  Greenhouse gases and global warming are now prominent issues. Overall, domestic transport accounts for 21% of greenhouse gas emissions. These emissions have risen by around 23% since 1990, threatening the achievement of Kyoto targets.

6 6 FIRST PILLAR: MOBILITY  Road transport Although international road transport has been liberalised, at national level it is still largely protected.  Rail transport After the liberalisation of freight transport, whose legal framework is due for completion in 2007, the third package has to open up international passenger transport. The Commission wishes to:  Air transport The restructuring and integration of the air industry's internal market are at a very advanced stage and customers benefit from the internal market's development.  Maritime transport The Commission identifies the maritime sector as an alternative to overland transport, particularly because it has considerable potential over short distances, as illustrated by the concept of motorways of the sea.  Transport by waterway The Commission emphasises river transport's potential, which could be enhanced through its integration into co-modal logistics chains.

7 7 SECOND PILLAR: PROTECTION  Employment and working conditions  Transport is a major employer, providing more than 10 million jobs in the Union..  The Commission proposes to examine rules on working conditions due to significant variations in labour costs.  The Commission divides the concept of protection into the following categories: passenger rights: It hopes to examine ways of promoting an improved quality of service and the assurance of basic passenger rights in all modes of transport, particularly for passengers with reduced mobility; safety: the Commission also emphasises the progress that has been made in this area, especially with the creation of a blacklist of dangerous airlines. security: the Commission wishes to refine the acquis of measures established in the wake of 11 September 2001 attacks, which revealed that transport is both a target and an instrument of terrorism. It will, therefore, propose amendments and broaden the scope of safety rules to include land and intermodal transport as well as critical infrastructures; urban transport is confronted with a specific problem.

8 8 THIRD PILLAR: INNOVATION  Energy The transport sector uses a great deal of energy, accounting for 71% of EU oil consumption: 60% by road transport and approximately 9% by air transport. The remaining 2% is used by rail and inland navigation. Rail transport uses 75% electricity and 25% fossil fuels.  Infrastructure By 2020, 60 big airports are expected to be over congested and a similar trend is observed in ports.  Mobilising sources of financing The total cost of the 30 priority trans-European transport network (TEN-T) projects, recorded in 2004, is estimated at around 250 billion.  Intelligent mobility The EU has adopted a Directive establishing a framework for toll motorways. These tariff systems aim to finance infrastructure, whilst helping to optimise traffic..

9 9 FOURTH PILLAR: RELATIONS WITH THIRD COUNTRIES  The Commission would like its policy to be part of a broader relationship with non-member countries, as the transport sector is inherently connected to international issues.  The convergence of EU and international standards opens export markets for European technology.  EU transport companies are often hampered by the maintenance of import or investment barriers in non-member countries.  The Commission also wishes to draw up a strategic framework for extending the main axes of the internal transport market and creating a network with neighbouring countries that so desire. 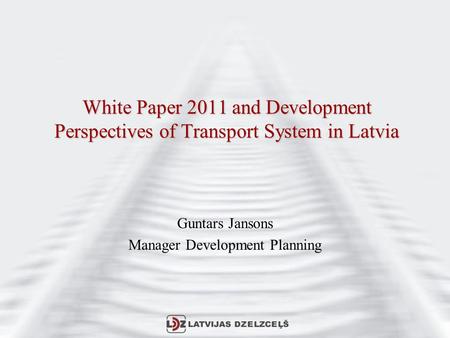 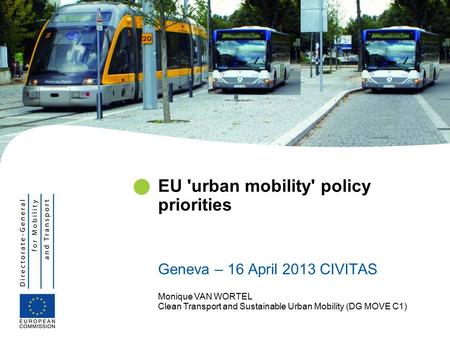 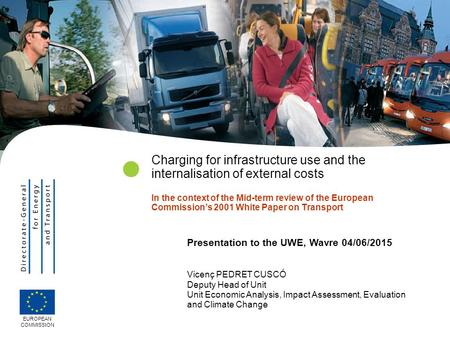  Charging for infrastructure use and the internalisation of external costs In the context of the Mid-term review of the European Commission’s 2001 White. 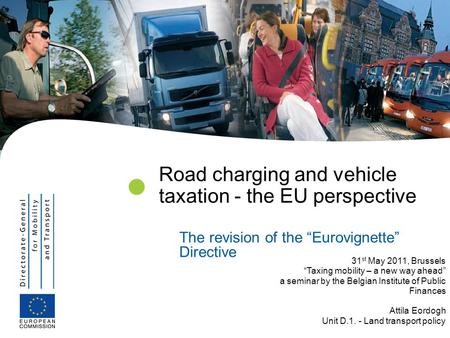 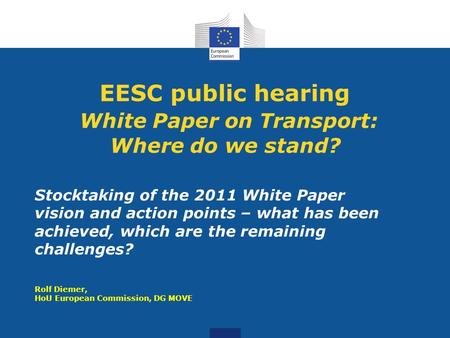 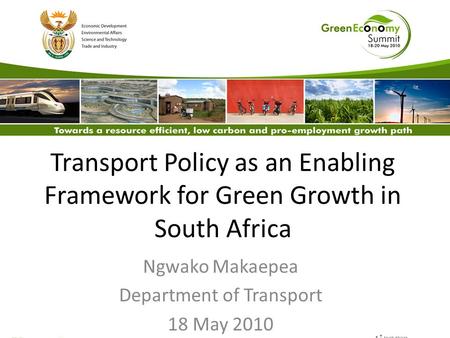 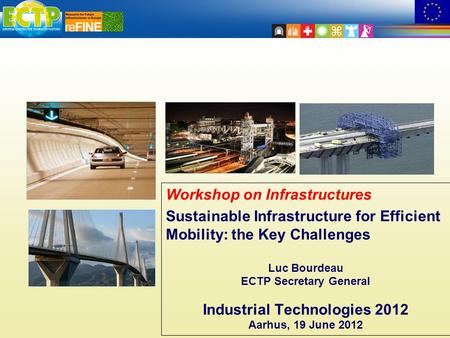 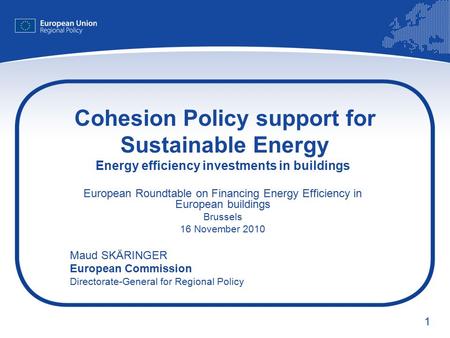 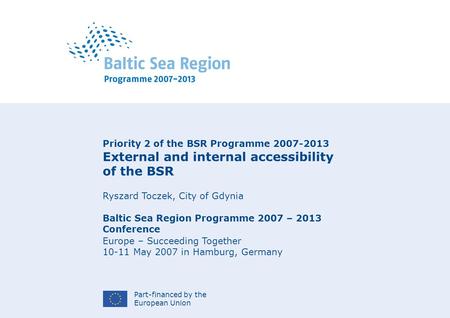 Part-financed by the European Union Priority 2 of the BSR Programme External and internal accessibility of the BSR Ryszard Toczek, City of Gdynia. 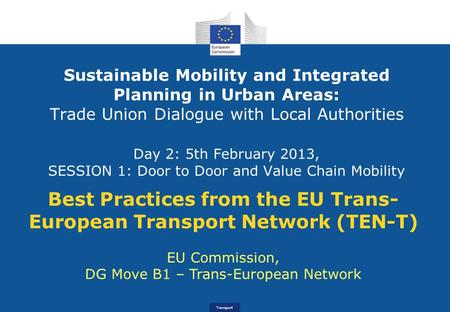 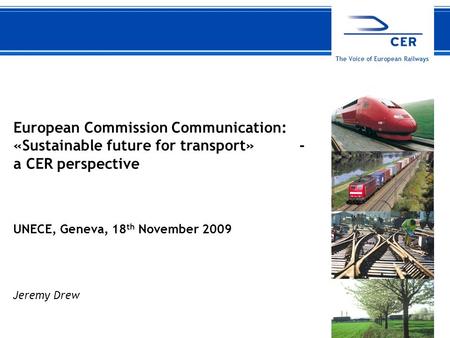 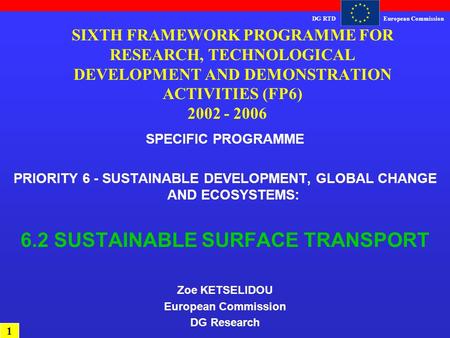 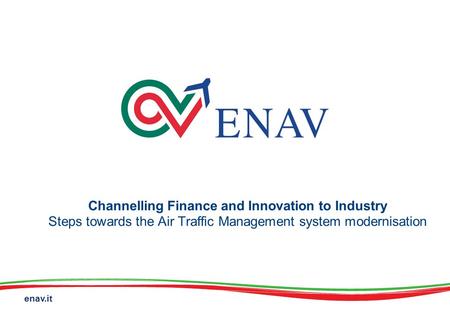