3 A brief history of CARICOM
The British West Indies Federation 1962 Jamaica and Trinidad and Tobago become independent states mid-1962 Common Services Conference called to discuss the continuation and strengthening of the areas of cooperation that existed during the Federation specifically UWI and the Regional Shipping Services The Government of Trinidad and Tobago proposed the creation of a Caribbean Community Dec. 1965 The Caribbean Free Trade Association (CARIFTA) was set up May 1968 The Commonwealth Caribbean Regional Secretariat established in Georgetown, Guyana October 1969 The Caribbean Development Bank (CDB) established in Bridgetown, Barbados. October 1972 Caribbean Leaders decided to transform CARIFTA into a Common Market August 1973 The Caribbean Community and Common Market (CARICOM) was established by the Treaty of Chaguaramas in Trinidad & Tobago

9 Antigua and Barbuda IT and e-Commerce are not yet a national priority.
Initiatives are on-going for re-engineering of Customs, Treasury and Inland Revenue but e-Government services are not yet available. The Government’s IT Centre has plans to build an open-source based community application software that could be replicated across government departments. Population: (1996) Area: 440 Sq Km

11 Barbados EduTech 2000 is probably the most comprehensive of educational reform in the region. This seven year programme seeks to transform the whole education network through upgrading of facilities and changing the curricula and methods of teaching to prepare students for the knowledge economy. Cooperate Affairs and Intellectual Property registry online Does allow interaction in a limited way EEPSI project - Enabling Environment for Private Sector Investment To connect those key government agencies that investors have to interact with NIS Inland Revenue Cooperate affairs and Intellectual Property Committee for e-government has been set up within the Ministry of the Civil Service to oversee the implementation of e-government Population: 264,600 (1996) Area: 430 Sq Km

12 Belize There is no formal IT or e-government policy or strategy in place at the moment E-Government by “default” The Budget wing of the Ministry of Finance is leading national initiatives to e-government by exercising control over the IT initiatives of all other departments as all proposals need to come to them for approval Population: 222,020 (1996) Area: 22,963 Sq Km

13 Dominica The Ministry of Communications is attempting to co-ordinate the efforts towards e-government An Inter-Ministerial Committee has been set up Population: 70, Area: 750 sq. km.

14 Grenada Grenada has finalized their e-Commerce / e-government policy
A government WAN is in its implementation stage and an agency for implementing e-Government and the IT policy is to be soon established Population: 98,600 (1996) Area: 345 Sq Km

15 Guyana Though the Government desires to promote the IT sector there is no IT or e-Commerce policy or strategy in place and no one agency responsible for the sector E-Government type initiatives are therefore still to start Even the existing trade infrastructure is not digitized Customs had implemented the UNCTAD sponsored ASYCUDA system, but mainly for data generation Population: 770,139 (1996) Area: 214,970 Sq Km

17 Jamaica A fairly extensive IT strategy and policy has been prepared
A Central Information Technology Office was set up for the implementation of e-Government initiatives as an interim measure. This will eventually become the Information Technology Authority JAMPRO also runs the Trade Point service as offers trade promotion and data via its website. Actual digitization of the whole trade network is however still to be realized Population: 2,515,500 (1996) Area: 10,991 Sq Km

18 St. Kitts and Nevis The government owns 69% of a company called “The CABLE” The CABLE is a Cable TV company which was transformed into a telecom provider and an ISP and it has excellent fibre-optic cable and links across the island of St. Kitts The government is looking at using this network for establishing a government WAN on which e-Government services will be offered to the public Population: 43,530 (1995) Area: 269 sq km

19 St. Lucia The government has already established a Wide Area Network (WAN) for itself but it appears to be rather under-utilized except for some accounting functions. No e-Government function is presently running. Customs department has been running ASYCUDA and have now established on-line links for duty collection with duty-free shops in the city. Population: 145,213 (1995) Area: 616 sq. km

20 St. Vincent and the Grenadines
An IT project in Treasury and Inland Revenue is on but no e-Government initiative is presently being planned. Population: 111,214 (1996) Area: 388 Sq Km

21 Suriname There are a few government websites and some computerization but no WAN or e-Government service presently available. Population: 408,401 (1995) Area: 163,820 Sq Km

22 Trinidad & Tobago Trinidad & Tobago has a detailed and comprehensive IT/e-Commerce policy Separate directorates for e-Commerce and for e-Government have been set up The policy is being coordinated by a Cabinet Steering Committee for e-Government and by a private-public sector Advisory Committee for e-Commerce. Population: 1,269,100 (1996) Area: 5128 Sq Km

26 Conclusions Many countries in CARICOM are yet to embark on e-government The larger member states (Trinidad and Tobago, Jamaica, Barbados, Bahamas) have embarked on their own initiatives CARICOM sees the need for coordination through bodies such as CARICAD We are happy for any assistance through funding, shared experiences, training etc. 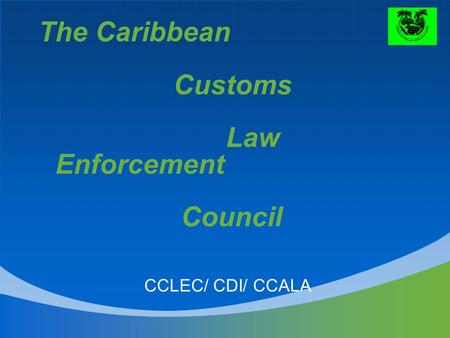 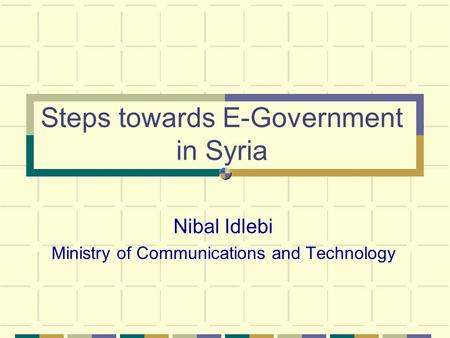 Steps towards E-Government in Syria 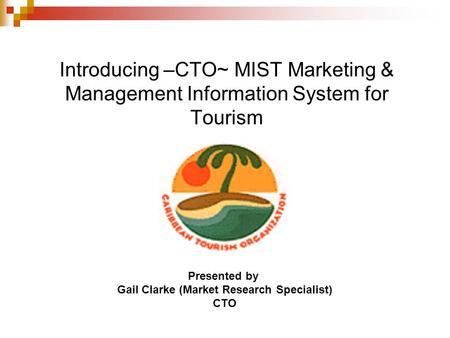 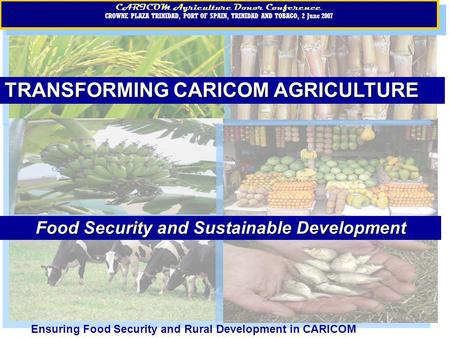 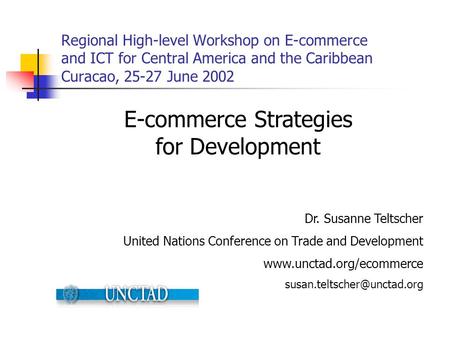 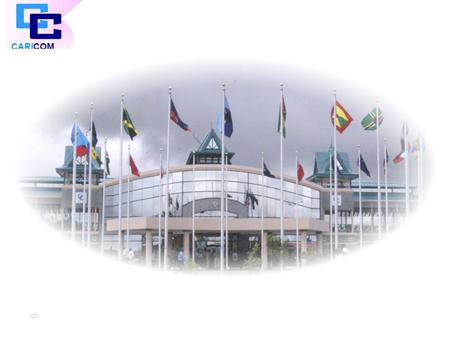 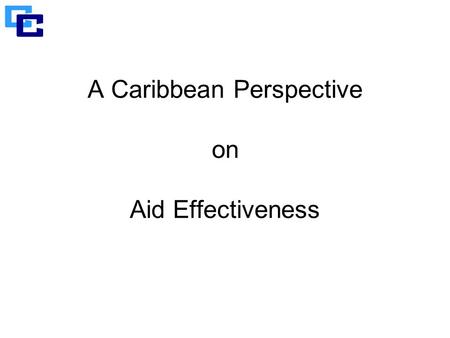 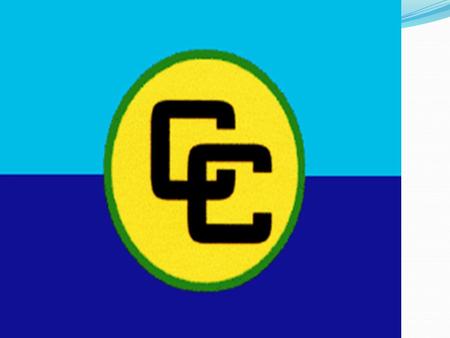 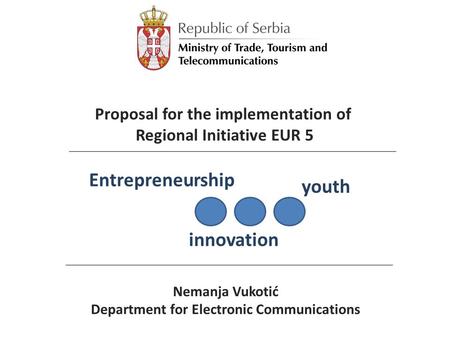 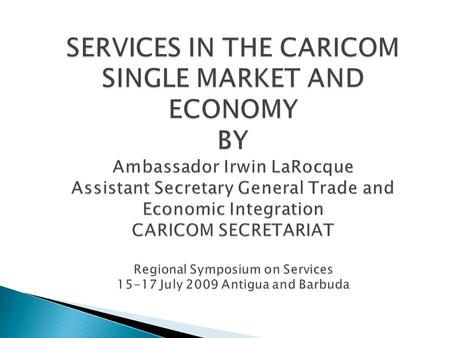 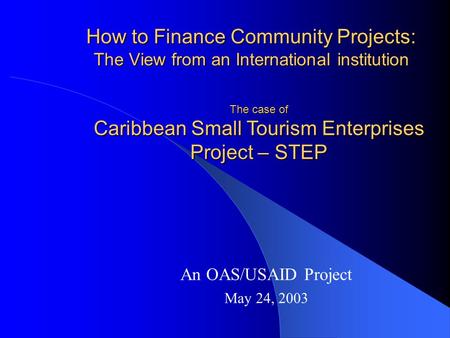 How to Finance Community Projects: The View from an International institution An OAS/USAID Project May 24, 2003 The case of Caribbean Small Tourism Enterprises. 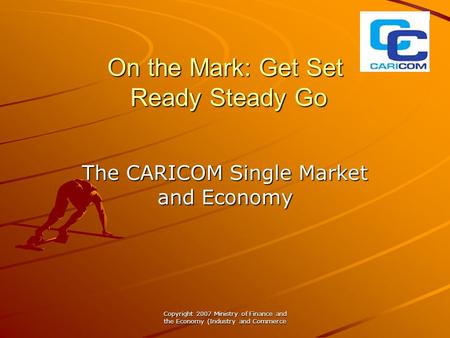 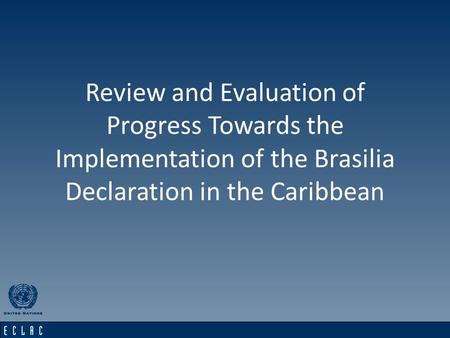 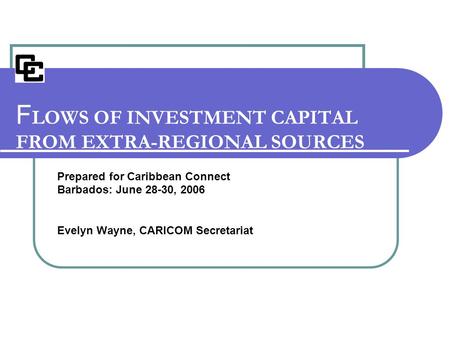 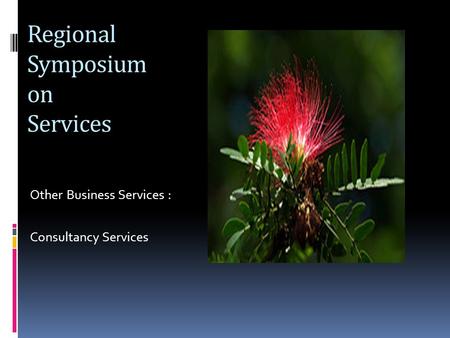 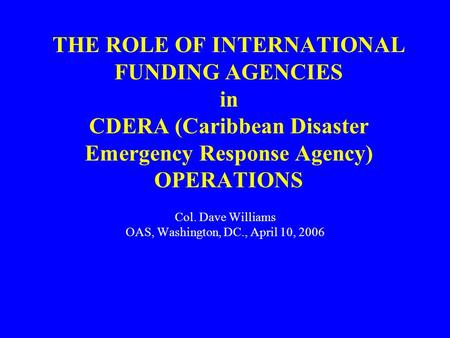 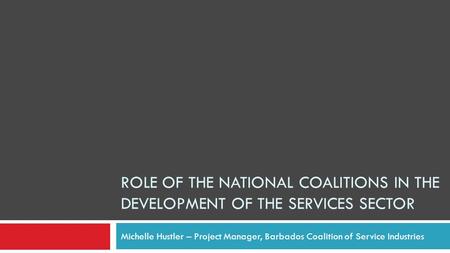 ROLE OF THE NATIONAL COALITIONS IN THE DEVELOPMENT OF THE SERVICES SECTOR Michelle Hustler – Project Manager, Barbados Coalition of Service Industries. 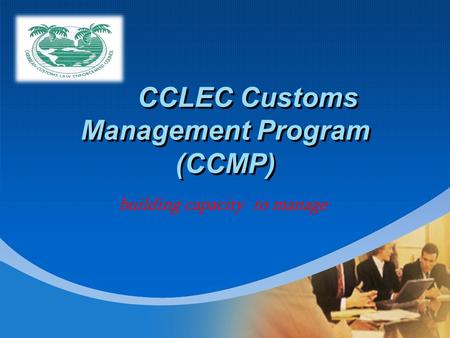 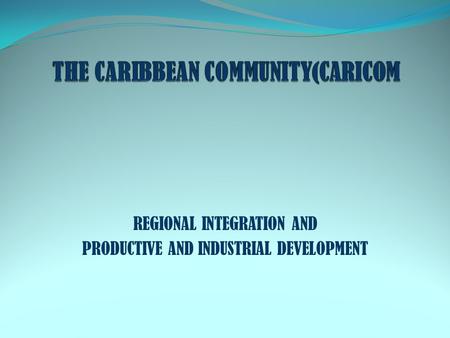 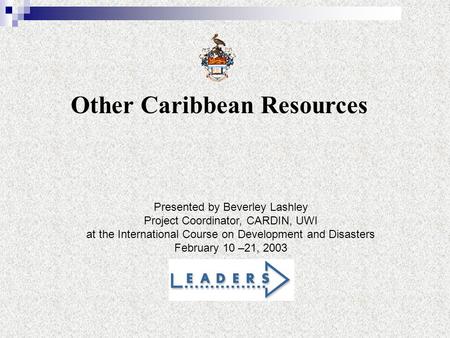 Other Caribbean Resources Presented by Beverley Lashley Project Coordinator, CARDIN, UWI at the International Course on Development and Disasters February.