2 About CoNE Community Network for Empowerment (CoNE) is a state level network of community based organisations (CBOs) of people who use drugs in Manipur, India contributing to the state health response related to drug use including HIV and other blood borne viruses and also take up the issues and problems faced by people who use drugs at the state and national level. Key Strategic focus Areas: Watch Dog Advocacy Crisis Intervention Research

3 Manipur  A small State in North east region of India  Geographically isolated from the rest of India  Characterised by multiple sources of conflict including a longstanding civil insurgent struggle  Poverty & Unemployment  Poor health infrastructure in all the districts other than Imphal (Capital of Manipur)  Approximately 2% of the population in Manipur inject drugs (Total population: 2.8 million)  Highest prevalence of HIV in the country - 1.13%

6 Why do we need viral load testing for HIV management? Viral Load testing for routine monitoring to ensure adherence to treatment and timely switch to second line or alternate first line regimens on failure of first line treatment WHO guideline on use of Viral Load If resources permit, use viral load in a routine approach, with the objective of detecting failure earlier than would be the case if immunological and/or clinical criteria were used to define failure.

9 Dolly, 18 years started her ART in 2004. In January 2007, her CD4 count was 393 cells/cu.mm (highest CD4 since the initiation of ART.) It dropped to 107 in January 2011 and she was referred by ART Centre for case review by SACEP for second line ART. She had to wait for 2 months for the next SACEP meeting to take place and was compelled to continue the first line treatment. Unfortunately, she fell very sick at that time and could not attend the meeting. Meanwhile, she was advised to go for further clinical investigations to strengthen her case. Due to increase in her CD4 count level, she was advised not to do her viral load test. December 2011, she was advised by SACEP to start with first line alternative regimen without doing a viral load testing. Her condition improved a bit after switching from d4T to TDF for a while. However, during the entire process of treatment she suffered from numbness of legs, loss of appetite & headache etc. By September 2012 her CD4 count dropped to 57cells/cu.mm. Patient’s Experience

10 She was admitted to hospital where there was no any further discussion for taking her case in the next SACEP meeting except giving I.V. fluids. She was discharged in two weeks from the hospital without any sign of improvement and despite of her grandmother’s repeated requests for further treatment. She was admitted again after a day due to severe sickness to hospital. The physician suggested the grandparents to shift her to RIMS as this was case of second line ART initiation. Program Director, RIMS (SACEP member) who promised to look into the matter personally and ensured that she will be provided second line immediately. With the hope of getting second line ART she was brought from casualty of JNIMS and admitted again at RIMS casualty on 2 nd October 2012. But, regrettably before getting her life saving drugs she expired on that day. This is just the one of the many patient’s experience of accessing second line treatment.

11 Viral load facilities in India: Problems Viral load testing is not routinely used in India First line treatment failure testing is based upon clinical and immunological failure criteria Only the expert panel-SACEP- will determine eligibility criteria for VL confirmatory testing Doctor at ART Centre can only refer to SACEP

13 Our Demands Accessibility to viral load testing on routine basis. Remove structural barriers viz. SACEP. Viral load testing as a treatment monitoring tool in resource-limited settings. “Undetectable Viral Load for us means empowerment as we then can concentrate on other work instead of worrying about our health.” 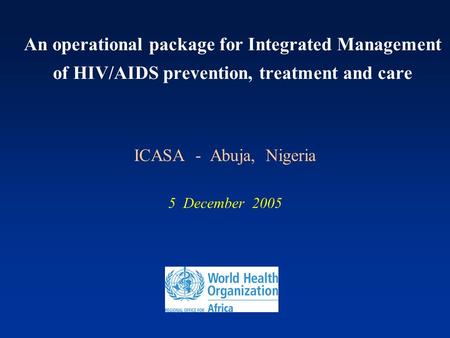 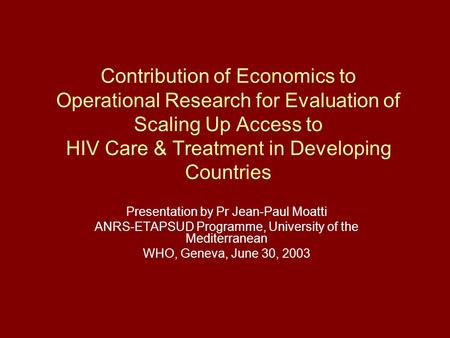 Contribution of Economics to Operational Research for Evaluation of Scaling Up Access to HIV Care & Treatment in Developing Countries Presentation by Pr. 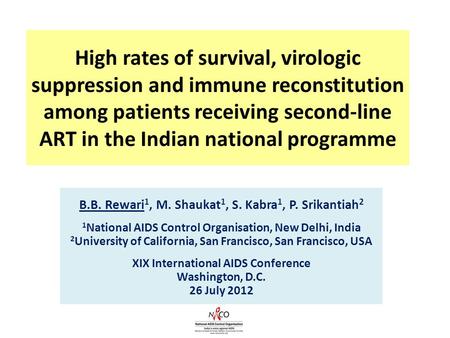 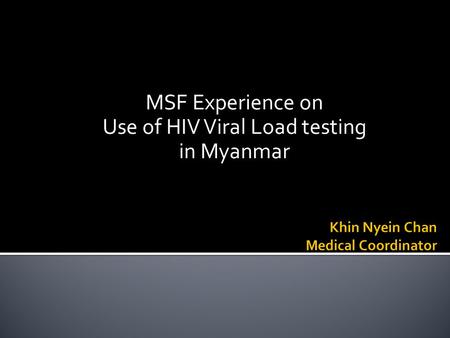 MSF Experience on Use of HIV Viral Load testing in Myanmar. 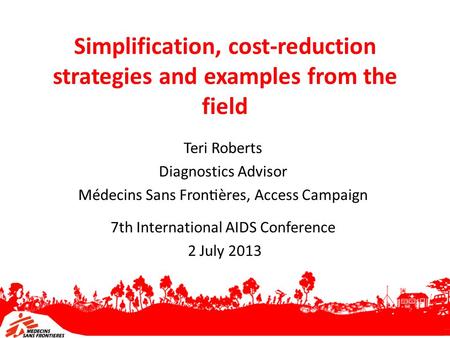 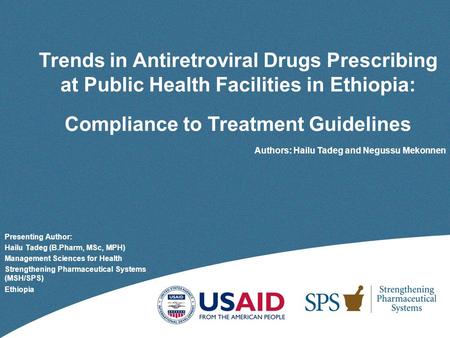 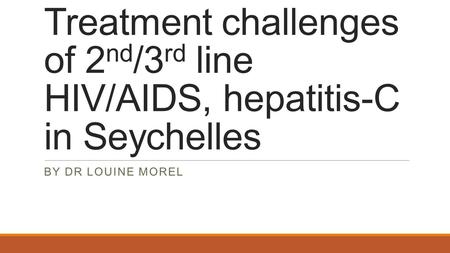 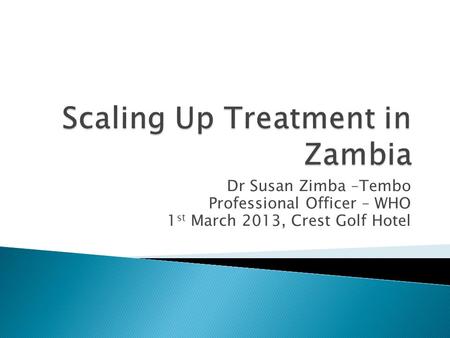 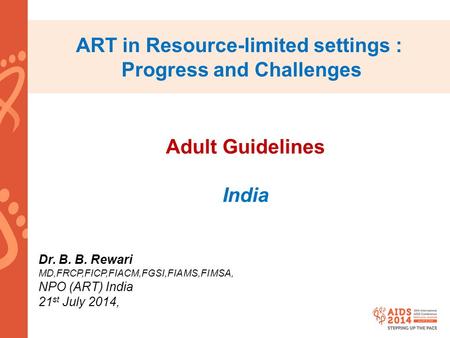 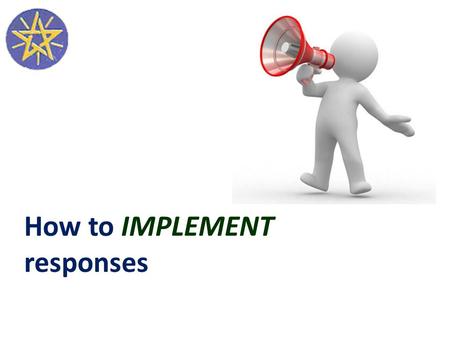 How to IMPLEMENT responses. Who and when ? IMMEDIATEPERIODICLONG TERM Region National Woreda Facility Comm’ty Level and timing of action. 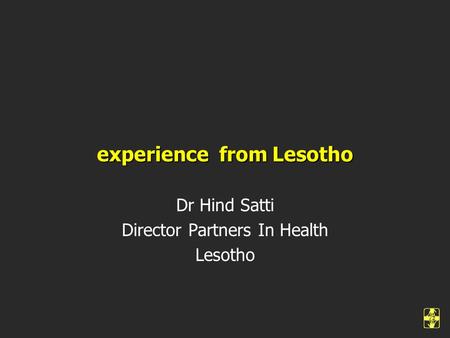 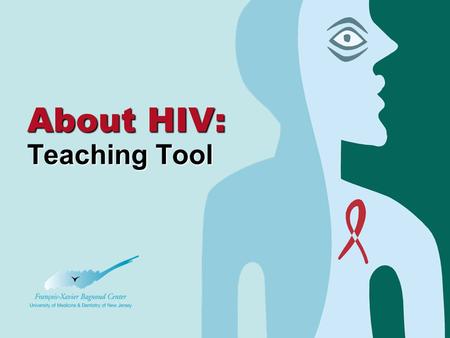 2 About HIV: Teaching Tool. About HIV: A teaching tool © 2nd edition 2006 This tool was developed by the François-Xavier Bagnoud Center at the University. 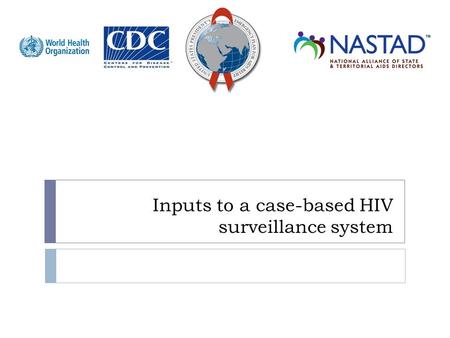 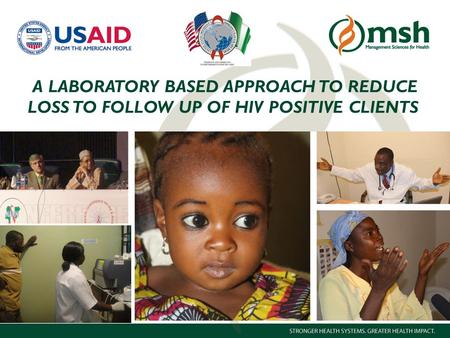 1Management Sciences for Health A LABORATORY BASED APPROACH TO REDUCE LOSS TO FOLLOW UP OF HIV POSITIVE CLIENTS. 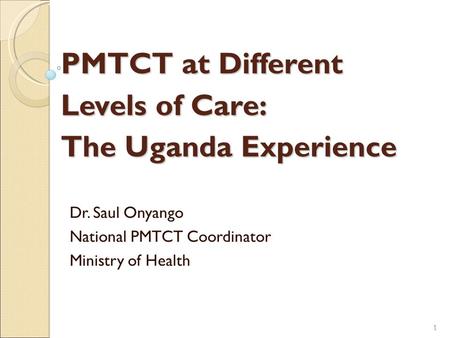 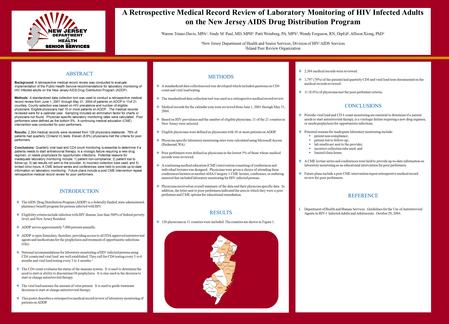 ABSTRACT Background: A retrospective medical record review was conducted to evaluate implementation of the Public Health Service recommendations for laboratory.