The Communist Menace 1947 By: J. Edgar Hoover. Background Information Founder of the Federal Bureau of Investigation (FBI) in its current form and was.

Presentation on theme: "The Communist Menace 1947 By: J. Edgar Hoover. Background Information Founder of the Federal Bureau of Investigation (FBI) in its current form and was."— Presentation transcript:

2 Background Information Founder of the Federal Bureau of Investigation (FBI) in its current form and was the director for 48 years Known to be supporter of civil rights and liberties and in contrast was known for abusing his position and using unwarranted political persecution A graduate of George Washington University where he received a law degree He never married and has been rumored to have been homosexual he had a close male companion, Clyde Tolson, of more than 40 years and both were lifelong bachelors Hoover devoted most of his career to uncovering subversive activities which probably led to his obsession with Communism

3 Background Information cont. Huge supporter of the HUAC (House of Un- American Activities Committee) Hoover was thought to have used the investigations into political corruption as a way to gain power over prominent political officials He had a collection on all of America’s leading politicians known as Hoover’s secret files, the files were used to influence the actions of these politicians…these files were destroyed by his close friend Clyde Tolson shortly after his death on May 2, 1972. He died while still in office.

6 Main Points cont. There is a reason to be scared, the size of the American Communist party means nothing. There influence is much greater. BE AFRAID! “What is important is the claim of the Communists themselves that for every party member there are 10 others ready, willing, and able to do the party’s work. Herein lies the greatest menace of communism. For these are the people who infiltrate and corrupt various spheres of American life. So rather than the size of the Communist Party the way to weigh its true importance is by testing its influence, its ability to infiltrate.” “…when the Communists overthrew the Russian government there was one Communist for every 2,277 persons in Russia. In the United States today there is one Communist for every 1,814 persons in the country…” Many good Americans are prone to be duped by the Communists’ trickery and double talk.

7 Historical Significance The Anti-Communist movement was very big at the time the document was written. He was addressing the HUAC Hoover himself had a big impact on society Really hurt liberals or anyone who got in the way

8 Questions to consider… Was there are real threat of Communism in America? During the Anti-Communist movement the civil liberties of many Americans were threatened, are we experiencing the same threats now with the war on terrorism?

Download ppt "The Communist Menace 1947 By: J. Edgar Hoover. Background Information Founder of the Federal Bureau of Investigation (FBI) in its current form and was." 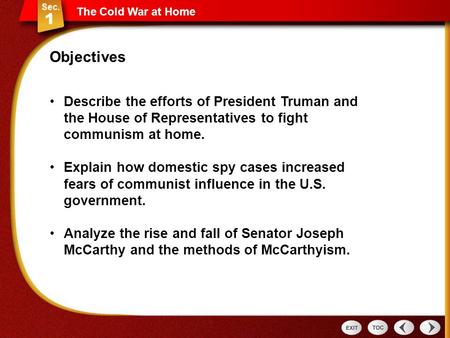 The Cold War at Home Objectives 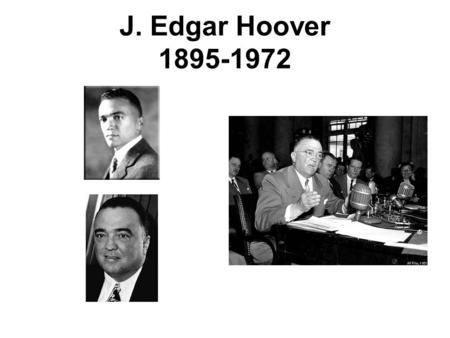 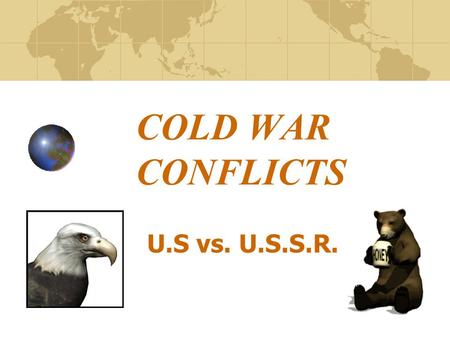 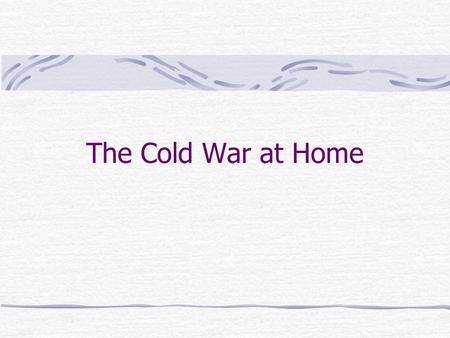 The Cold War at Home. Fear of Communist Influence With the Great Depression – tens of thousands of Americans joined the Communist Party. After FDR ’ s. 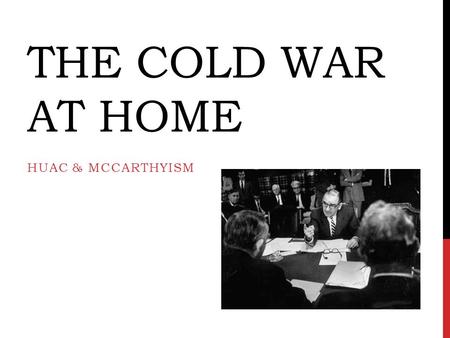 THE COLD WAR AT HOME HUAC & MCCARTHYISM. THE COLD WAR  A period of tension between Communist and Anti- Communist nations  Led by the two world superpowers: 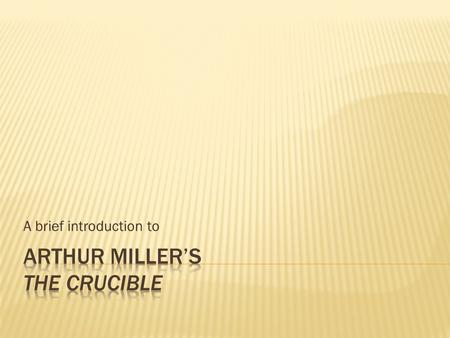 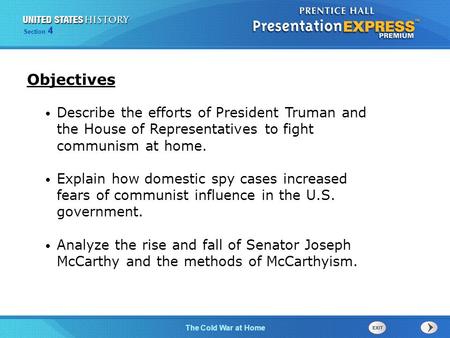 The Cold War BeginsThe Cold War at Home Section 4 Describe the efforts of President Truman and the House of Representatives to fight communism at home. 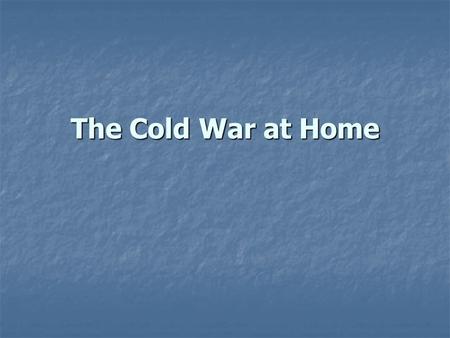 The Cold War at Home. Scenario: You have recently won a full scholarship to your dream university. The week before the end of your senior year, you are. 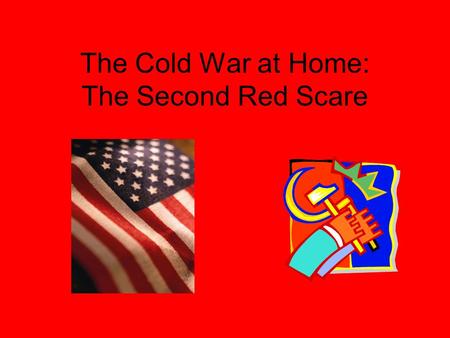 The Cold War at Home: The Second Red Scare. 1949: Anxiety over Communism 3/49: Soviet Union detonated an atomic bomb China: had been locked in a civil. 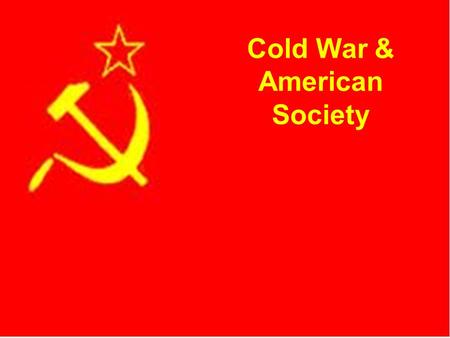 CH 21.3 Cold War & American Society. Why be scared of the Communist? They want to take away –Your freedoms. 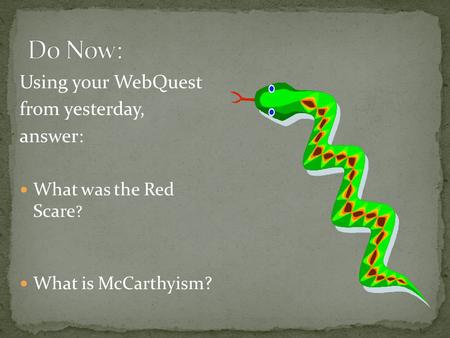 Using your WebQuest from yesterday, answer: What was the Red Scare ? What is McCarthyism? 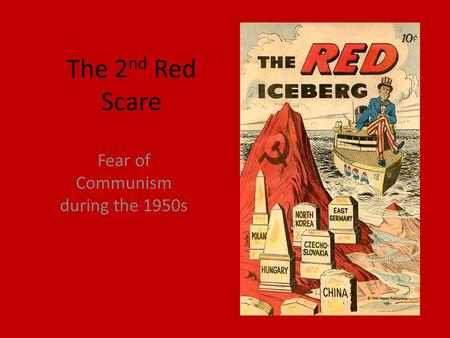 The 2 nd Red Scare Fear of Communism during the 1950s. 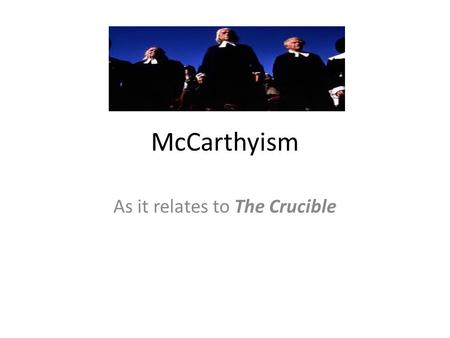 McCarthyism As it relates to The Crucible. What is McCarthyism? It’s the term used to describe the false accusations against many Americans for belonging. 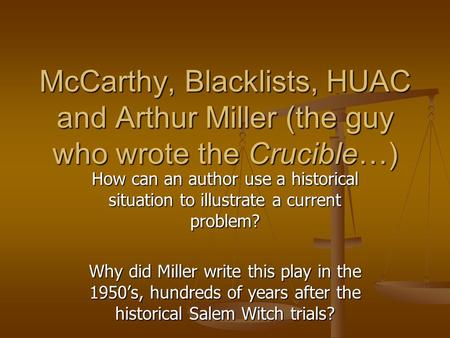 McCarthy, Blacklists, HUAC and Arthur Miller (the guy who wrote the Crucible…) How can an author use a historical situation to illustrate a current problem? 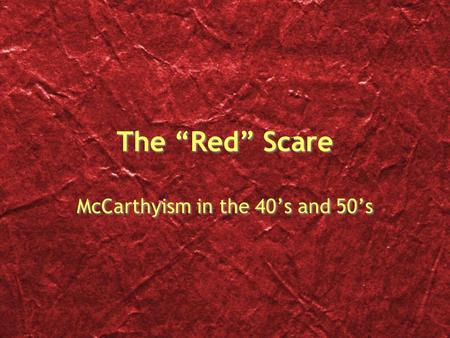 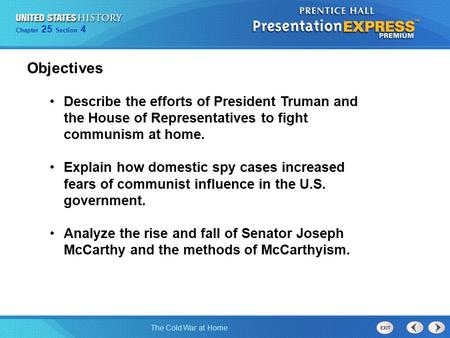 Objectives Describe the efforts of President Truman and the House of Representatives to fight communism at home. Explain how domestic spy cases increased. 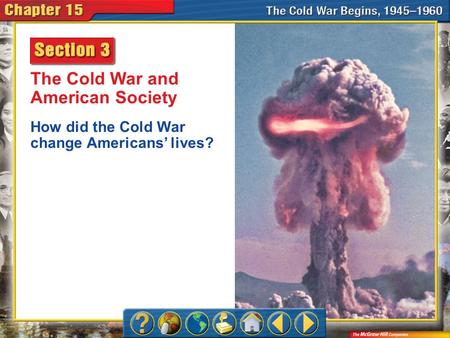 The Cold War and American Society 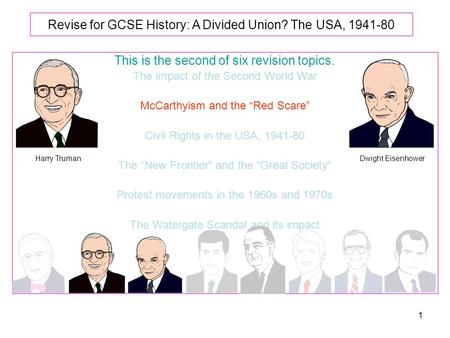 1 Revise for GCSE History: A Divided Union? The USA, This is the second of six revision topics. The impact of the Second World War McCarthyism. 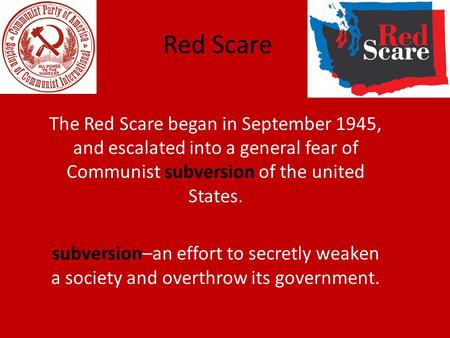 Red Scare The Red Scare began in September 1945, and escalated into a general fear of Communist subversion of the united States. subversion–an effort to. 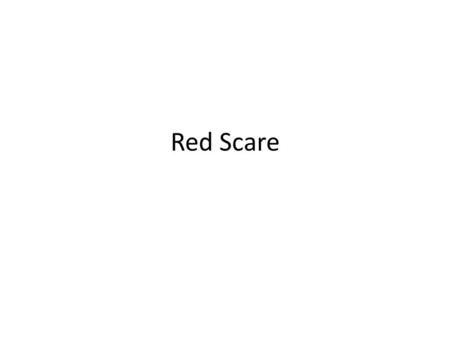 Red Scare. What is the Red Scare? Back in the United States, people were starting to fear that Communism had made it home. The U.S. discovered that the.