3 PWM Principle The dc input to the inverter is “chopped” by switching devices in the inverter. The amplitude and harmonic content of the ac waveform is controlled by the duty cycle of the switches. The fundamental voltage v1 has max. amplitude = 4Vd/ for a square wave output but by creating notches, the amplitude of v1 is reduced (see next slide).

6 Sinusoidal PWM The most common PWM approach is sinusoidal PWM. In this method a triangular wave is compared to a sinusoidal wave of the desired frequency and the relative levels of the two waves is used to control the switching of devices in each phase leg of the inverter.

14 Sinusoidal PWM (cont’d)
At m=1, the max. value of fundamental peak voltage =0.5Vd = Vpksq.wave (=4Vd/2). This max. value can be increased to 0.907Vpksq.wave by injecting 3rd order harmonics - this is a common mode voltage and does not affect torque production.

17 Sinusoidal PWM (cont’d)
Frequency Relation It is desirable to have mf(P) = integer. However, as fundamental freq. decreases, fc would also have to decrease - not desirable in terms of machine harmonic loss. An optimal choice of fc for different f’s is shown below.

18 Single Phase Half-Bridge Inverter
C+ , C- large and equal => voltage divides exactly between capacitors at all times. The current i0 must flow through parallel combination of C+ and C- => i0 has no dc component in steady state.

23 Dead Time Effect Because of finite turn-on time and turn-off time of switches, you wait a blanking time, td after switching one switch off in a leg before switching on the other switch in the same leg. The blanking time will increase or decrease the output slightly depending on the direction of the load current. Also, additional high frequencies appear in the output waveform.

25 Dead Time Effect (cont’d)
Current or voltage feedback compensation can be used to minimize waveform distortion due to the dead time effect.

26 Selective Harmonic Elimination
By placing notches in the output waveform at proper locations, certain harmonics can be eliminated. This allows lower switching frequencies to be used -> lower losses, higher efficiency.

27 Selective Harmonic Elimination (cont’d)
General Fourier series of wave is given by: where and

28 Selective Harmonic Elimination (cont’d)
For a waveform with quarter-cycle symmetry, only the odd harmonics with sine components will appear, i.e. an=0 and where

29 Selective Harmonic Elimination (cont’d)
It can be shown (see text for derivation) that Thus we have K variables (i.e. 1, 2, 3, ... K) and we need K simultaneous equations to solve for their values.With K  angles, K-1 harmonics can be eliminated.

30 Selective Harmonic Elimination (cont’d)
Consider the 5th and 7th harmonics (the 3rd order harmonics can be ignored if the machine has an isolated neutral). Thus K=3 and the equations can be written as: Fundamental: 5th Harmonic: 7th Harmonic:

31 Selective Harmonic Elimination (cont’d)
These transcendental equations can be solved numerically for the notch angles 1, 2, and 3 for a specified fundamental amplitude. For example, if the fundamental voltage is 50% (i.e. b1=0.5) the  values are: 1=20.9, 2=35.8, and 3=51.2 This approach can easily be implemented in a microcomputer using a lookup table for notch angles (see text).

33 Space-Vector PWM Space vector PWM is an advanced, computationally intensive technique that offers superior performance in variable-speed drives. This technique has the advantage of taking account of interaction among the phases when the load neutral is isolated from the center tap of the dc supply. Space vector PWM can be used to minimize harmonic content of the three-phase isolated neutral load. This approach is discussed in detail in the textbook.

34 Current Regulated PWM The flux and torque output of an ac motor is directly controlled by the current input to the motor. Thus having current control on the output of a voltage-fed converter with voltage control PWM is important. A feedback current loop is used to control the machine current. Two PWM techniques for current control will be considered: 1. Instantaneous Current Control 2. Hysteresis Band Current Control

35 Instantaneous Current Control
The below figure shows an instantaneous current control scheme with sinusoidal PWM in the inner control loop.

36 Instantaneous Current Control (cont’d)
Actual current i is compared to commanded current i* and the error fed to a proportional- integral (P-I) controller. The rest of the circuit is the standard PWM topology. For a 3 inverter, three such controllers are used. Although the control approach is simple, this method produces significant phase lag at high frequencies which are very harmful to high-performance drives.

43 Hysteresis-Band Control (cont’d)
This approach is very popular because of simple implementation, fast transient response, direct limiting of device pk. current, and practical insensitivity to dc link voltage ripple (=> small filter capacitor). However, PWM freq. is not const. which leads to non-optimal harmonic ripple in machine current. Can be overcome by adaptive hysteresis band. Also, significant phase lag at high freqs. is a drawback of this method for high-performance drives.

47 Output Ripple The output ripple may be defined as the difference between the instantaneous value of the current/voltage compared to the value of the fundamental frequency component. Consider the load to be an ac motor. v0 = v01 + vripple ; i0 = i01 + iripple i0 vL = vL1 + vripple Single - Phase Inverter + v0 - + e0 = 2E0 sint - L 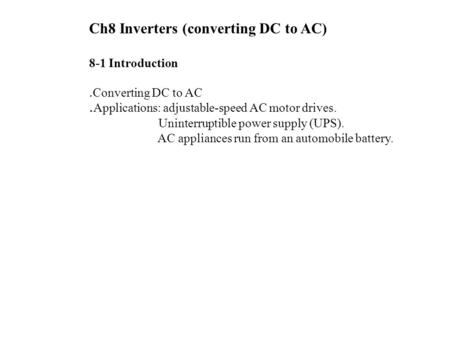 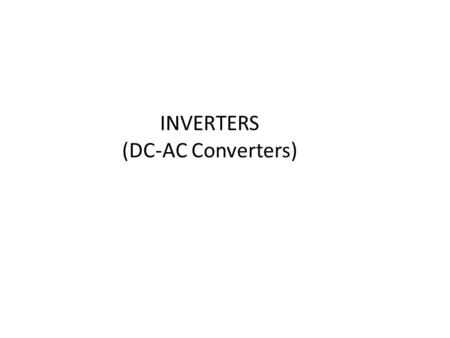 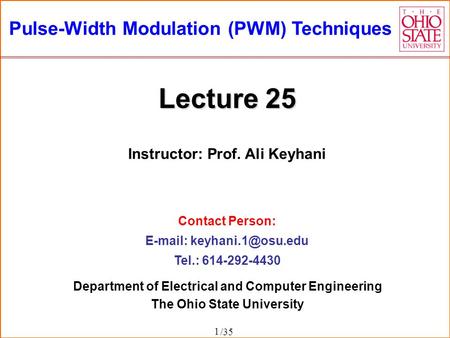 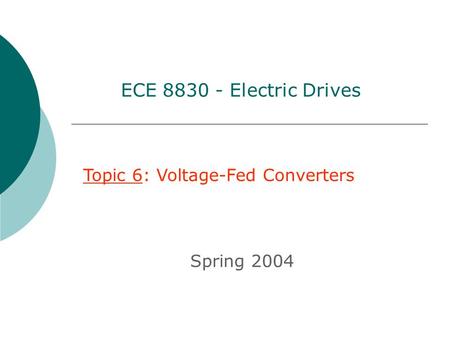 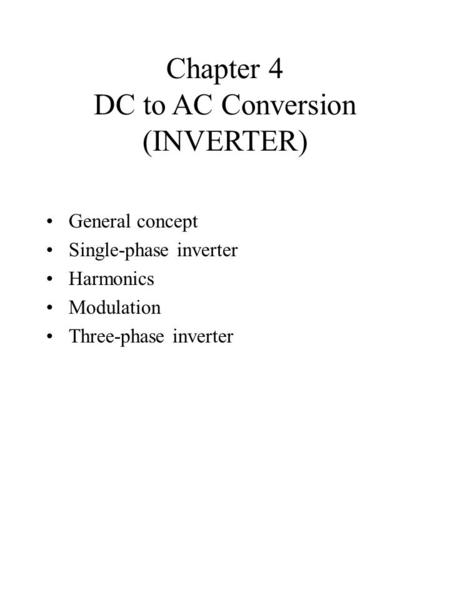 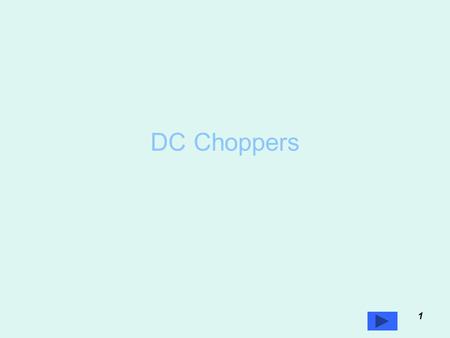 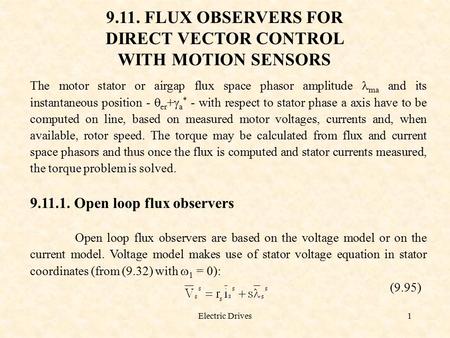 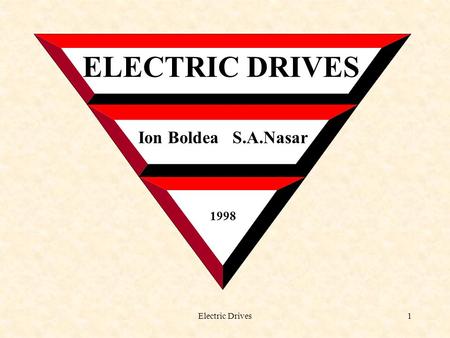 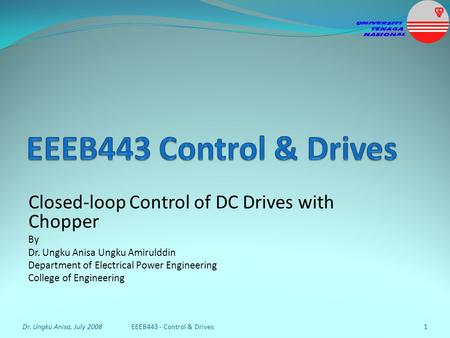 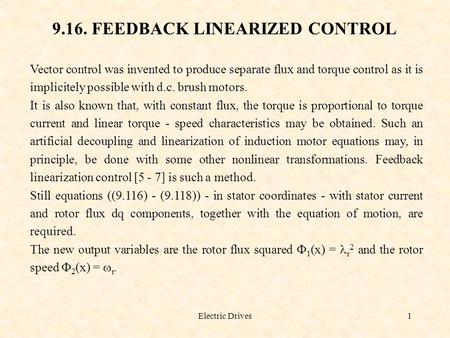 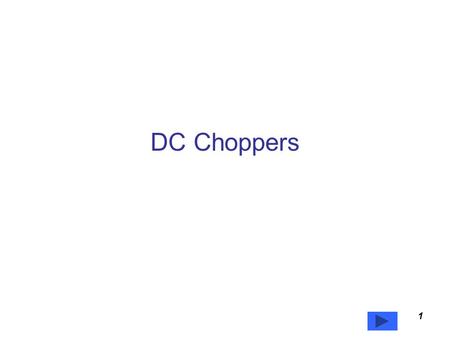 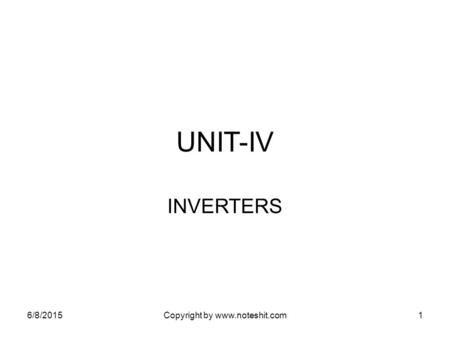 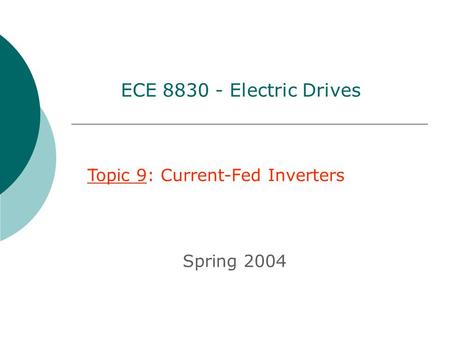 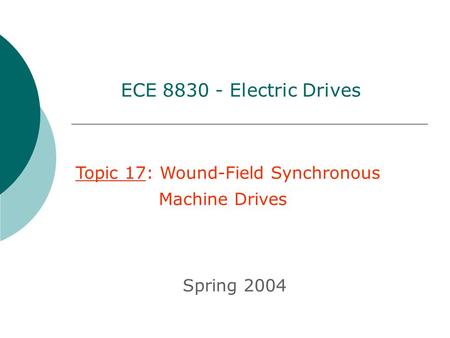 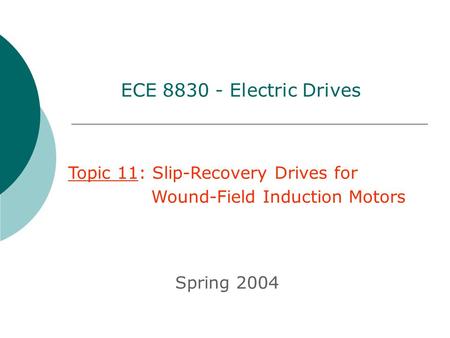 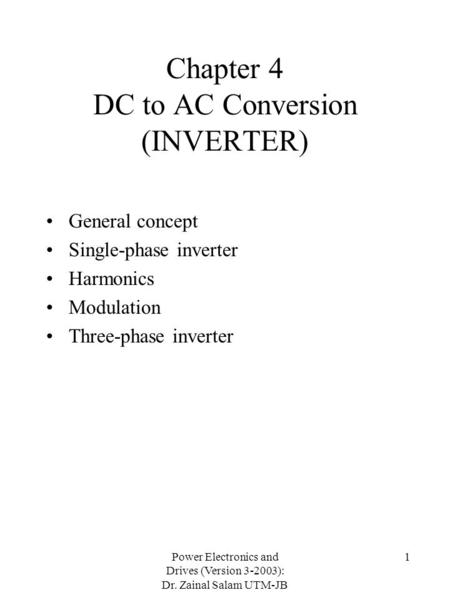 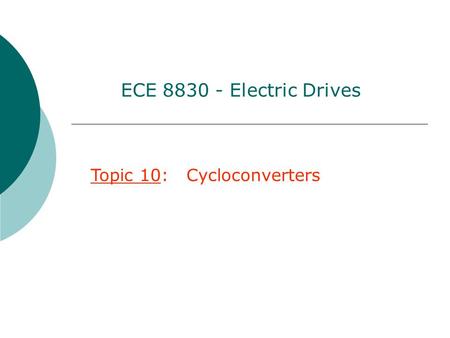 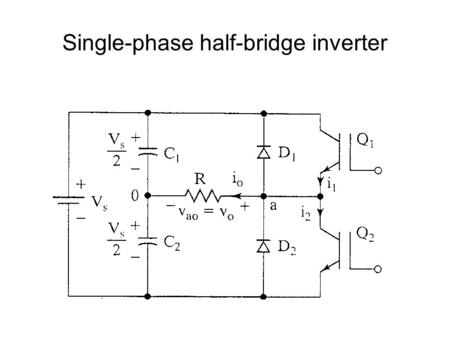 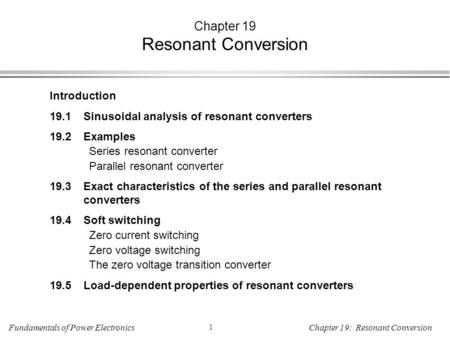 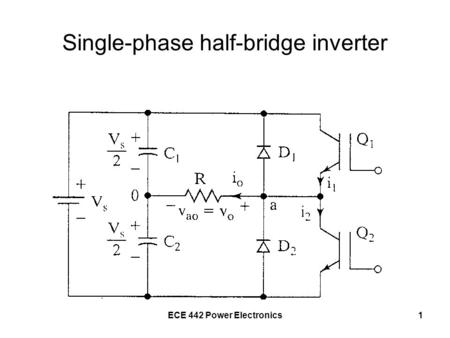