2 Recycling Matter Lesson Objectives Define biogeochemical cycles.
Describe the water cycle and its processes. Give an overview of the carbon cycle and the oxygen cycle. Outline the steps of the nitrogen cycle.

3 BIOGEOCHEMICAL CYCLES
bio- biotic components geo- geological and abiotic components In this example Hg (mercury) moves from the atmosphere to ocean water, ocean water to ocean organism, and then back to atmosphere NOTE: How does mercury get into fish? Mercury contamination is a worldwide problem. It can come from many sources. It occurs naturally in the environment in rocks, soils, water and air. Products containing mercury which are thrown in the garbage or washed down sinks and drains end up in landfills, incinerators, or sewage treatment facilities. Mercury from these products can leach into the ground and groundwater. Mercury may be directly released into the environment, or through combustion (burning) activities, from coal-fired power plants, where it is released in fine particles in the air that fall to the earth in rain or snow. Once released into the environment, mercury eventually ends up in water and settles into sediments. Bacteria in the water converts the inorganic mercury into methylmercury, an organic mercury compound. These bacteria are eaten by plankton and other small creatures, which in turn are eaten by small fish, then larger fish. Mercury does not easily leave the body of an organism, so the amount of mercury builds up in species as they go up the food chain in a process called bioaccumulation. Predatory fish, which sit higher up on the food chain and are long-lived, can accumulate hundreds of thousands to millions of times the concentration of mercury that originally entered the water. As people eat fish with mercury, the mercury is transferred to humans and builds up in the body.

4 WATER CYCLE This is a biogeochemical cycle….with no beginning or end.
Water is in three different stages Gas (where??? water vapor), Liquid (where???? water in oceans, etc), and solid (where??? Snow mountain top = ice) A change in state causes these three stages: includes evaporation, sublimation, and transpiration….

8 CARBON CYCLE Carbon in rocks is dissolved by water and ends up in oceans Other carbon from burned fossil fuels or their by-products ends up in the atmosphere or biosphere Note: fossil fuels are formed from the remains of dead organisms Look at Table in your textbook to see what forms of carbon are found in the atmosphere???? Carbon dioxide In oceans???? Carbonic acid, bicarbonate ion

11 Carbon in the Biosphere organic pathway
Photosynthetic algae and bacteria take up bicarbonate ions in the ocean use it to synthesize organic compounds Terrestrial autotrophs remove carbon dioxide from the atmosphere to synthesize organic compounds Both recycle it back through a process called cellular respiration Decomposers release carbon dioxide when they consume dead organisms They rates of exchange are about equal Left cyanobacteria; right green algae Center = autotroph; terrestrial

12 Carbon in Rocks and Sediments (geological pathway)
Long, slow process through rock formation, subduction, and volcanism In oceans begins as sedimentary rock; pressure of additional layers forms the rock Subduction = rock from ocean floor reaches cracks in the Earth’s crust and are pulled down to the mantle…volcanoes erupt and stored carbon is rocks is released

13 Oxygen Cycle Movement of oxygen through the atmosphere, biosphere, and the lithosphere.

14 Oxygen and the Hydrosphere
Failures in this type of movement = development of hypoxic (low oxygen) zones or dead zones Cause: excessive nutrient pollution from human activities that lead to depletion of oxygen required to sustain marine life Deplete the oxygen required to support most marine life in bottom and near-bottom water. The main driving factor of the oxygen cycle is photosynthesis, which is responsible for the modern Earth's atmosphere and life as we know it.

16 Oxygen and the Lithosphere
Largest reservoir of Earth's oxygen is within the silicate and oxide minerals of the crust and mantle (99.5%). The lithosphere also consumes free oxygen via chemical weathering and surface reactions. An example of surface weathering chemistry is formation of rust. Oxygen is also cycled between the biosphere and lithosphere. Marine organisms in the biosphere create calcium carbonate shell material (CaCO3) that is rich in oxygen. When the organism dies its shell is deposited on the shallow sea floor and buried over time to create the limestone sedimentary rock of the lithosphere. Weathering processes initiated by organisms can also free oxygen from the lithosphere. Plants and animals extract nutrient minerals from rocks and release oxygen in the process. The presence of atmospheric oxygen has led to the formation of ozone (O3) and the ozone layer within the stratosphere. The ozone layer is extremely important to modern life as it absorbs harmful ultraviolet radiation.

17 NITROGEN CYCLE Most nitrogen is stored in the atmosphere (78% nitrogen gas) Nitrogen moves through abiotic and biotic components of ecosystems Atmospheric nitrogen goes into the soil; several different organisms in the soil fix it to be used by terrestrial organisms and eventually it passes back into the atmosphere

19 Nitrogen Fixation Nitrogen-fixing bacteria live in soil or in the root
nodules of legumes In aquatic system, some cyanobacteria fix nitrogen Nitrogen gas in the atmosphere can also be fixed by lightning Some nitrogen is converted into fertilizer by humans Legumes = peas and beans Explosives and the burning of fossil fuels also release nitrogen gas in the form of nitrous oxide N2O (a greenhouse gas); increased accumulation in the recent past has contributed to global warming and other environmental problems

22 Lesson Summary Chemical elements and water are recycled through biogeochemical cycles. The cycles include both biotic and abiotic parts of ecosystems. The water cycle takes place on, above, and below Earth’s surface. In the cycle, water occurs as water vapor, liquid water, and ice. Many processes are involved as water changes state in the cycle. The atmosphere is an exchange pool for water. Ice masses, aquifers, and the deep ocean are water reservoirs. In the carbon cycle, carbon passes among sedimentary rocks, fossil fuel deposits, the ocean, the atmosphere, and living things. Carbon cycles quickly between organisms and the atmosphere. It cycles far more slowly through geological processes. The oxygen cycle produces most available oxygen through photosynthesis by plants on land and phytoplankton on the ocean’s surface. Some oxygen is made in the atmosphere when sunlight breaks down atmospheric water. Oxygen is used by both biotic and abiotic factors in ecosystems: plants, animals, bacteria, decomposition, fire, and oxidizing agents The nitrogen cycle moves nitrogen back and forth between the atmosphere and organisms. Bacteria change nitrogen gas from the atmosphere to nitrogen compounds that plants can absorb. Other bacteria change nitrogen compounds back to nitrogen gas, which re-enters the atmosphere. 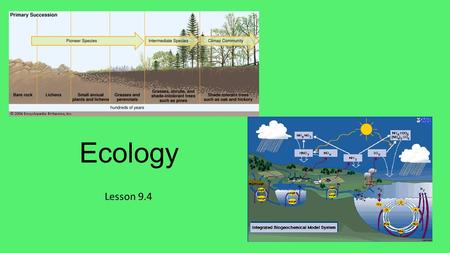