3 English New York In 1664, the English took control of the New Netherland colony and anglicized the name of the town to Harlem. Until the Revolutionary War, Harlem remained a farming community

4 Harlem: The Making of a Ghetto Manhattan’s first suburb Annexed to NY in 1873 Astor Row “The Other Harlem” Burst of the Real Estate Bubble

14 Marcus Garvey believed that African Americans should build a separate society in Africa. In 1914, he founded the Universal Negro Improvement Association (UNIA) and attracted a million members by the mid-1920s. He left a powerful legacy of black pride, economic independence, and Pan-Africanism. If you have no confidence in self, you are twice defeated in the race of life. With confidence, you have won even before you have started. – M. Garvey

15 Harlem, NY became the largest black urban community. Harlem suffered from overcrowding, unemployment and poverty. However, in the 1920s, it was home to a literary and artistic revival known as the Harlem Renaissance.

18 The Harlem Renaissance included a literary movement led by well- educated blacks with a new sense of pride in the African-American experience. Claude McKay’s works expressed the pain and frustration of life in the ghetto.

19 Missouri-born Langston Hughes was the movement’s best known poet. Many of his poems described the difficult lives of working-class blacks. Some of his poems were put to music, especially jazz and blues.

20 Zora Neale Hurston wrote novels, short stories, and poems. She often wrote about the lives of poor, unschooled, southern blacks. She focused on the culture of the people– their folk-ways and values.

21 Afr ica n- Am eric an Per for mer s During the 1920s, black performers had large followings. Paul Robeson, son of a slave, became a major dramatic actor. His performance in Othello was widely praised.

22 Jazz was born in the early 20 th century. In 1922, a young trumpet player named Louis Armstrong joined the Creole Jazz Band. Later he joined Fletcher Henderson’s band in NYC. Armstrong is considered the most important and influential musician in the history of jazz.

23 In the late 1920s, Duke Ellington, a jazz pianist and composer, led his ten-piece orchestra at the famous Cotton Club. Ellington won renown as one of America’s greatest composers.

24 Bessie Smith, blues singer, was perhaps the most outstanding vocalist of the decade. She achieved enormous popularity and by 1927, she became the highest- paid black artist in the world.

27 From Opera House to the Apollo Theater 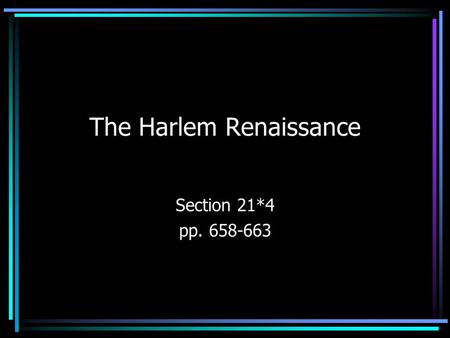