1 Parts of the Story What are they?

2 Plot: the arrangement of actions in a drama or story, often in a sequence according to cause and effect. Setting: physical, emotional, temporal and cultural context in which the action of the story or play takes place. Mood: A general emotional atmosphere created by the characters and the setting and by the language chosen to present these.

3 Point of View: the angle of vision or perspective from which a story is told. -first person narrative (narrator is a character) -third person – author

4 Characterization: the techniques used to depict the traits of a character
Character: a person (personified being) in a work of literature and their traits -a rounded character – complexities / contradictions – depth -a flat character -2 dimensional / no depth of personality

7 Types of Linear Plots Plots can be told in Chronological order
Flashback In addition, you can note that some stories follow a circular or episodic plot, and hypertextual stories can be different every time they’re read, as the reader chooses the direction that the story takes. If a story that students are working on does not fit into the triangle structure, think about why the author would choose a different story structure and how the structure has changed. In media res (in the middle of things) when the story starts in the middle of the action without exposition

8 Pyramid Plot Structure
The most basic and traditional form of plot is pyramid-shaped. This structure has been described in more detail by Aristotle and by Gustav Freytag.

9 Aristotle’s Unified Plot
Aristotle defined plot as comprised of three parts: beginning, middle, and end. When all the parts of a story follow naturally from one to the next in a connected way, Aristotle called the narrative structure a unified plot. The parts of a unified plot are linear, leading from one to the next in a cause and effect chain. The basic triangle-shaped plot structure was described by Aristotle in 350 BCE. Aristotle used the beginning, middle, and end structure to describe a story that moved along a linear path, following a chain of cause and effect as it works toward the solution of a conflict or crisis.

12 Plot Components Climax: the turning point, the most intense moment—either mentally or in action Rising Action: the series of conflicts and crisis in the story that lead to the climax Falling Action: all of the action which follows the climax Exposition: The mood and conditions existing at the beginning of the story. The setting is identified. The main characters with their positions, circumstances and relationships to one another are established. The exciting force or initial conflict is introduced. Sometimes called the “Narrative HOOK” this begins the conflict that continues throughout the story. Rising Action: The series of events, conflicts, and crises in the story that lead up to the climax, providing the progressive intensity, and complicate the conflict. Climax: The turning point of the story. A crucial event takes place and from this point forward, the protagonist moves toward his inevitable end. The event may be either an action or a mental decision that the protagonist makes. Falling Action: The events occurring from the time of the climax to the end of the story. The main character may encounter more conflicts in this part of the story, but the end is inevitable. Resolution/Denouement: The tying up of loose ends and all of the threads in the story. The conclusion. The hero character either emerges triumphant or is defeated at this point. Exposition: the start of the story, the situation before the action starts Resolution: the conclusion, the tying together of all of the threads

13 Conflict Conflict is the dramatic struggle between two forces in a story. Without conflict, there is no plot.

15 Create a Plot Pyramid for “Jack and the Beanstalk”

Download ppt "Parts of the Story What are they?." 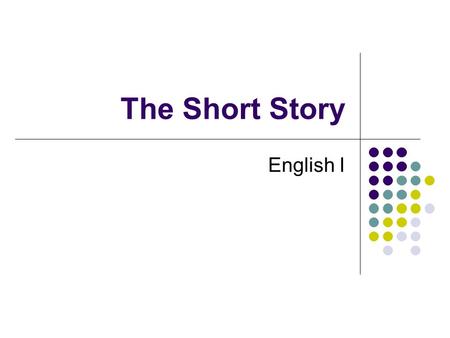 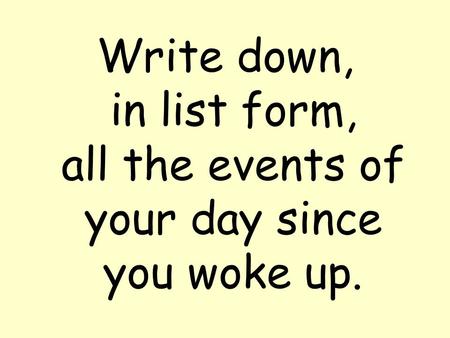 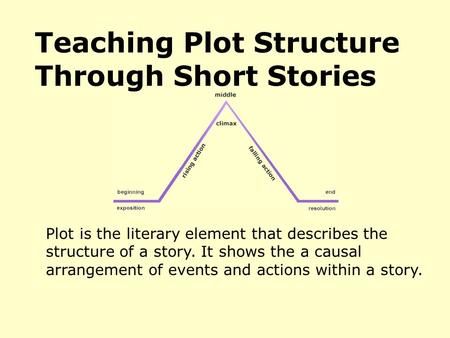 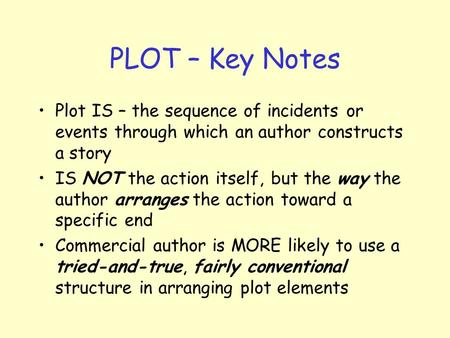