3 Pelvis Pelvis is the part of the trunk infero posterior to the abdomen and is the area of transition between the trunk and the lower limbs. Perineum The perineum is inferior to the floor of the pelvic cavity; its boundaries form the pelvic outlet. The perineum contains the external genitalia and external openings of the genitourinary and gastrointestinal systems

5 Subdivision of Pelvis The pelvis is divided into two regions
The superior region is the false pelvis (greater pelvis) and is generally considered part of the abdomen . The true pelvis (lesser pelvis) is related to the inferior parts of the pelvic bones, sacrum, and coccyx, and has an inlet and an outlet.

8 Bones and Features of the Pelvic Girdle
In the mature individual, the pelvic girdle is formed by three bones Right and left hip bones:develops from the fusion of three bones, the ilium, ischium, and pubis. Sacrum: formed by the fusion of five, originally separate, sacral vertebrae.

10 Pelvic inlet The pelvic inlet is somewhat heart shaped and completely ringed by bone . Posteriorly, the inlet is bordered by the body of vertebra S1, which projects into the inlet as the sacral promontory Laterally, a prominent rim on the pelvic bone continues the boundary of the inlet forward to the pubic symphysis, where the two pelvic bones are joined in the midline.

12 Pelvic outlet The diamond-shaped pelvic outlet is formed by both bone and ligaments. Two ligaments-the sacrospinous and the sacrotuberous ligaments-are important architectural elements of the walls because they link each pelvic bone to the sacrum and coccyx . These ligaments also convert two notches on the pelvic bones-the greater and lesser sciatic notches-into foramina on the lateral pelvic walls

25 Anterior Pelvic Wall The anterior pelvic wall is the shallowest wall and is formed by the bodies of the pubic bones, the pubic rami, and the symphysis pubis. It participates in bearing the weight of the urinary bladder.

27 Posterior Pelvic Wall The posterior pelvic wall is extensive and is formed by the sacrum and coccyx and by the piriformis muscles.

29 Lateral Pelvic Wall The lateral pelvic wall is formed by part of the hip bone below the pelvic inlet, the obturator membrane, the sacrotuberous and sacrospinous ligaments, and the obturator internus muscle and its covering fascia

35 Puborectalis muscle The puborectalis forms a puborectal sling, the tonus of which is responsible for maintaining the anorectal angle (perineal flexure). Puborectalis portion is important in maintaining fecal continence immediately after rectal filling or during peristalsis when the rectum is full and the involuntary sphincter muscle is inhibited (relaxed).

36 Pelvic Diaphragm C. Posterior fibers: The iliococcygeus is inserted into the anococcygeal body and the coccyx. 2. Coccygeus Muscle(ischio-coccygeus):This small triangular muscle arises from the spine of the ischium and is inserted into the lower end of the sacrum and into the coccyx Nerve supply: Fourth and fifth sacral nerve (pudendal nerve)

37 Main Action of Pelvic Diaphragm
The levatores ani muscles of the two sides form an efficient muscular sling that supports and maintains the pelvic viscera in position. They also have an important sphincter action on the anorectal junction, and in the female they serve also as a sphincter of the vagina. The levator ani must relax to allow urination and defecation

38 Injury to the Pelvic Floor
Injury to the pelvic floor during a difficult childbirth can result in the loss of support for the pelvic viscera leading to uterine and vaginal prolapse, herniation of the bladder (cystocele).

39 Arteries and Veins of Pelvis

47 Veins Pelvic veins follow the course of all branches of the internal iliac artery except for the umbilical artery and the iliolumbar artery. On each side, the veins drain into internal iliac veins, which leave the pelvic cavity to join common iliac veins situated just superior and lateral to the pelvic inlet

49 Nerves of Pelvis and Perineum

56 Pudendal nerve block The anesthesia is produced by blocking the pudendal nerves near the ischial spine of the pelvis. A pudendal block is usually given in the second stage of labor just before delivery of the baby. It relieves pain around the vagina and rectum as the baby comes down the birth canal. It is also helpful just before an episiotomy .

60 The pelvic splanchnic nerves, which constitute the sacral part of the parasympathetic system and arise from the second, third, and fourth sacral nerves. They are distributed to the pelvic viscera. 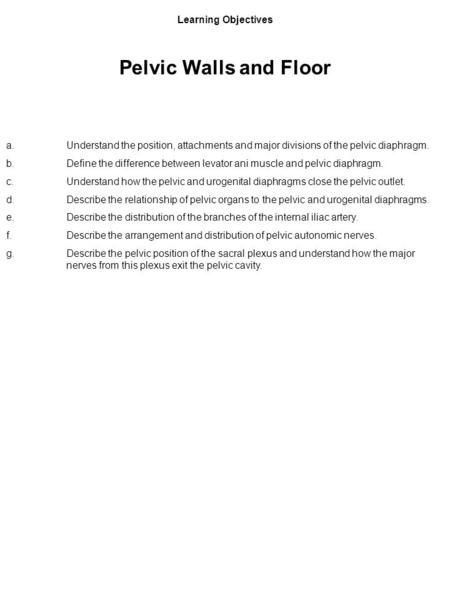 Learning Objectives Pelvic Walls and Floor a.Understand the position, attachments and major divisions of the pelvic diaphragm. b.Define the difference.