3 Disciplinary Removals O The only type of removals regulated by the discipline provisions of the IDEA and Federal Regulations are disciplinary removals.

4 Disciplinary Removals O School personnel may remove a child with a disability who violates a code of student conduct from his or her current placement to an appropriate interim alternative educational setting, another setting, or suspension... O See 34 C.F.R. §300.530(b).

5 Another Setting Removal to another setting is broad enough to encompass a removal to any location, for example: A specified location for the purpose of housing students for the specific purpose, i.e. seclusion room. A separate classroom. The hallway. The office

7 School Day O School day means any day, including a partial day that children are in attendance at school for instructional purposes. O School day has the same meaning for all children with or without disabilities. O 34 C.F.R. §300.11(c).

8 Reasons to Count Removals O The duration of a single or series of removals will determine whether a disciplinary removal rises to the level of a change in placement. O Removals that constitute a change of placement trigger other district obligations and student protections.

9 Reasons to Count Removals O Once disciplinary removals exceed 10 cumulative school days in a school year, FAPE must be provided in ANY subsequent removal. 34 C.F.R. §300.530(b)(2). O Stated another way, the student has moved outside of the FAPE free zone. FAPE must be provided.

11 Change of Placement 34 C.F.R. §300.536: (a) For purposes of removals of a child with a disability from the child's current educational placement under §§ 300.530 through 300.535, a change of placement occurs if— (1) The removal is for more than 10 consecutive school days; or (2) The child has been subjected to a series of removals that constitute a pattern— (i) Because the series of removals total more than 10 school days in a school year; (ii) Because the child's behavior is substantially similar to the child's behavior in previous incidents that resulted in the series of removals; and (iii) Because of such additional factors as the length of each removal, the total amount of time the child has been removed, and the proximity of the removals to one another. (b)(1) The public agency determines on a case-by-case basis whether a pattern of removals constitutes a change of placement.

13 No Change in Placement O If the school determines that a series of removals DID NOT result in a change in placement, the student may be disciplined consistent with the school’s code of conduct. O However, FAPE must be provided beyond 10 school days. O The school and at least one of the child’s teachers determine the services to provide FAPE. O 34 C.F.R. §300.530(d).

14 No Change in Placement O The student must receive, as appropriate, a functional behavioral assessment and behavioral intervention services and modifications that are designed to address the behavior violation so that is does not recur. O 34 C.F.R. §300.530(d).

15 Change in Placement O If the school determines, after analysis, that a disciplinary removal IS a change in placement, then the IEP team must determine the services necessary to provide FAPE, although in another setting. O Notice must be provided to the parents that the removal constitutes a change in placement, and the procedural safeguards must be given. O A manifestation determination MUST be conducted. O 34 C.F.R. §300.530(d), (e) and (h).

21 What about Discipline & LRE? O The IDEA does not require that children with disabilities suspended or expelled for disciplinary reasons continue to be educated with children who are not disabled during the period of their removal. 71 Federal Register 46586. O Although FAPE must be provided, it does not have to be in the LRE according to IDEA. O Discipline must not be used as a means of disconnecting a child with a disability from education. 71 Federal Register 46715.

23 Recent Decisions O Danny K. v. Dep’t. of Educ., State of Hawaii, 57 IDELR 185 (D. Hawaii 2011). An MD review team properly determined that a student's detonation of an explosive device in a school bathroom was not triggered by his ADHD. The District Court concluded that the MD review team made a proper determination, and that the team was not required to examine whether the student falsely confessed.

24 Stay Put O When an appeal with regards to disciplinary placement or findings of the manifestation determination has been made by either the parent or the LEA, the child must remain in the interim alternative educational setting pending the decision of the hearing officer or until the expiration of the time period specified in §300.530(c) or (g), whichever occurs first, unless the parent and the SEA or LEA agree otherwise. O In the event of a dispute and hearing request, the student stays in the disciplinary placement until the expiration of the disciplinary removal. O 34 C.F.R. §300.533.

26 Weapon O “A weapon, device, instrument, material, or substance, animate or inanimate, that is used for, or is readily capable of, causing death or serious bodily injury, except that such term does not include a pocket knife with a blade of less than 2 1/2 inches in length." 18 U..SC. §930(g)(2).

27 Weapon: Gun-Free Schools Act The No Child Left Behind Act incorporates the Gun-Free Schools Act, which requires a mandatory expulsion of at least one year for students who bring firearms to school or possess firearms on school grounds. 20 U.S.C. §7151(b)(1). The Gun- Free Schools Act adopts the definition of "firearm" provided at Section 921(a)(3) of the U.S. Criminal Code: 1. Any weapon (including a starter gun) which will or is designed to or may readily be converted to expel a projectile by the action of an explosive; 2. The frame or receiver of any such weapon; 3. Any firearm muffler or firearm silencer; or 4. Any destructive device. Such term does not include an antique firearm.

28 Weapon: Gun-Free Schools Act O A "destructive device" is further defined as any explosive, incendiary, or poison gas, including: i) a bomb; ii) a grenade; iii) a rocket having a propellant charge of more than four ounces; iv) a missile having an explosive or incendiary charge of more than one-quarter ounce; v) a mine; or vi) a device similar to any of the devices described in the preceding clauses. 18 U.S.C. §921(a)(4)(A). O The definition of "destructive device" also includes any type of weapon... by whatever name known which will, or may be readily converted to, expel a projectile by the action of an explosive or other propellant, and which has any barrel with a bore of more than one-half inch in diameter." 18 U.S.C. §921(a)(4)(B).

31 Illegal Drug The IDEA regulations define "Illegal drug" as a controlled substance; but does not include a controlled substance that is legally possessed or used under the supervision of a licensed health-care professional or that is legally possessed or used under any other authority under that Act or under any other provision of Federal law. 34 C.F.R. §300.530 (i)(2). Remember, in order to be a special circumstance, the student must knowingly possess or use an illegal drug.

33 Students NOT YET Eligible A previously unidentified student facing disciplinary action such as suspension, expulsion, or a change in placement to an interim alternative educational setting may claim the procedural safeguards of the IDEA if the district had knowledge that the student was a child with a disability before the behavior that precipitated the disciplinary action occurred. 34 C.F.R. §300.534.

35 The District Should Have Known O The parent of a third-grader with ADHD successfully appealed a district's decision to discipline her child without first conducting an MD review. The district provided the student with interventions starting in first grade. It provided one-on-one instruction, small group instruction, and classroom modifications. In third grade, her teachers became increasingly concerned about the impact of the student's escalating behavior on her academic performance. The intervention assistance team reconvened and recommended that the student undergo a mental health evaluation, but it did not initiate a special education evaluation at that time. The following month, the district suspended and expelled the student for threatening behavior. O When the parent filed for due process, the district argued that an MD review was not required because the student had not yet been found eligible under the IDEA. The judge pointed out that the IDEA protects students who have not been determined to be eligible under the act when the circumstances indicate that a district should have suspected that the student had a disability. When the district expelled the student, it had provided her with intervention services for approximately two years yet she had made few gains. Additionally, the behavioral concerns expressed by her teacher and others warranted a referral to an outside mental health agency. O These circumstances provided “sufficient reason for [the district] to suspect that [the student] might be a child with a disability and, therefore, entitled to an evaluation under the IDEA.” See Jackson v. Northwest Local Sch. Dist., 55 IDELR 71 (S.D. Ohio 2010).

36 In Closing... O In order to successfully navigate the discipline provisions of the IDEA, school districts must understand these concepts: O Disciplinary removals, both short term and long term, O Change of placement, and O Manifestation determinations. O Discipline of students with disabilities can be complicated. O Keep in mind the over-arching obligation to review and revise the IEPs for students who are not successful. 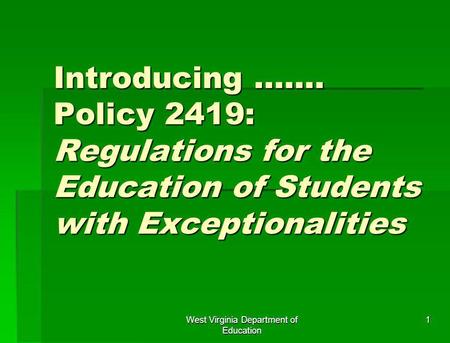 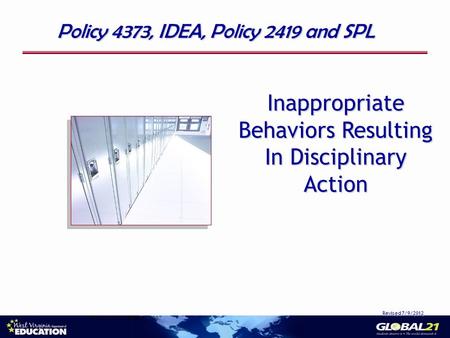 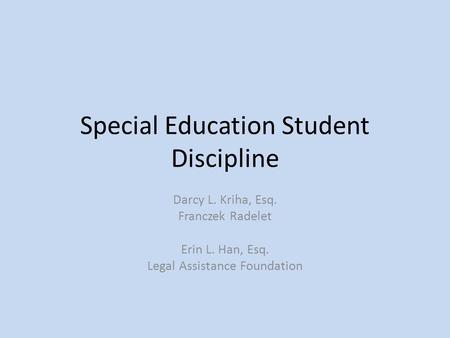 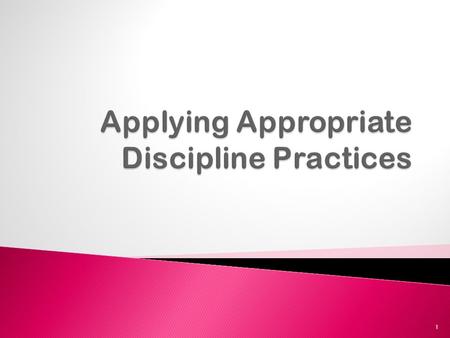 1. The information you are about to hear derives from the Individuals with Disabilities Education Improvement Act (IDEA 2004) and Policy 2419: Regulations. 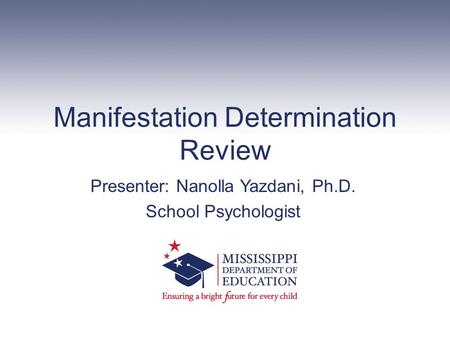 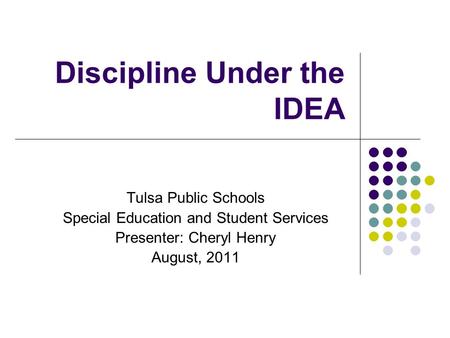 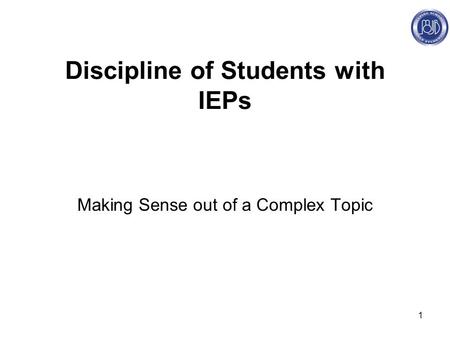 1 Discipline of Students with IEPs Making Sense out of a Complex Topic. 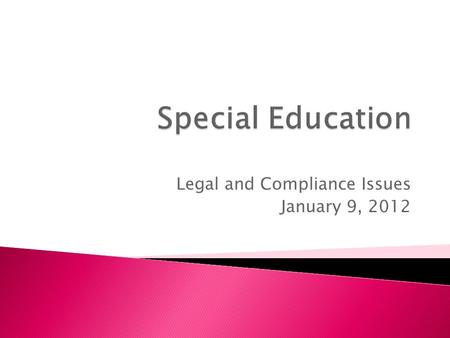 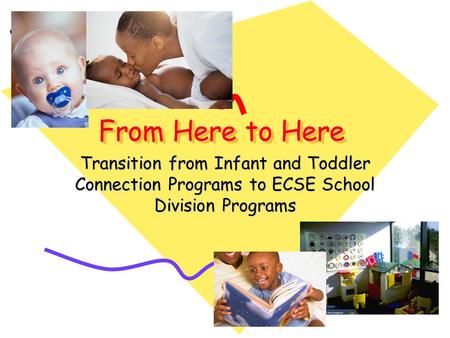 From Here to Here Transition from Infant and Toddler Connection Programs to ECSE School Division Programs. 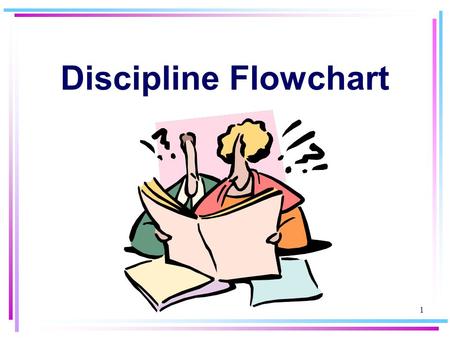 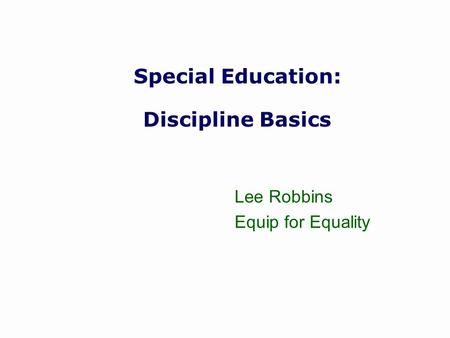 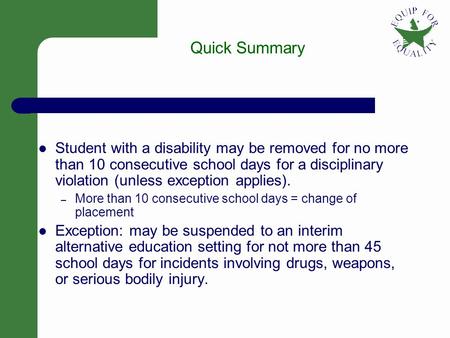 1 Quick Summary Student with a disability may be removed for no more than 10 consecutive school days for a disciplinary violation (unless exception applies). 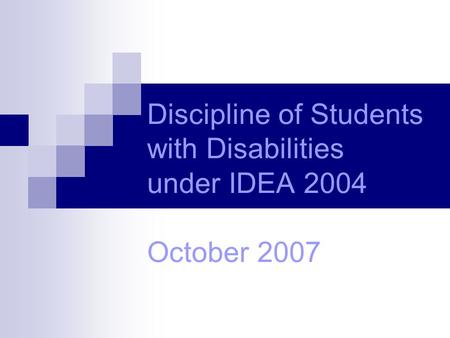 Discipline of Students with Disabilities under IDEA 2004 October 2007. 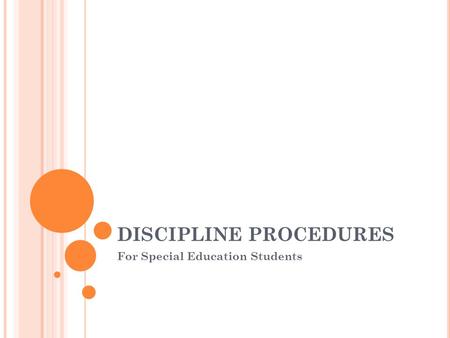 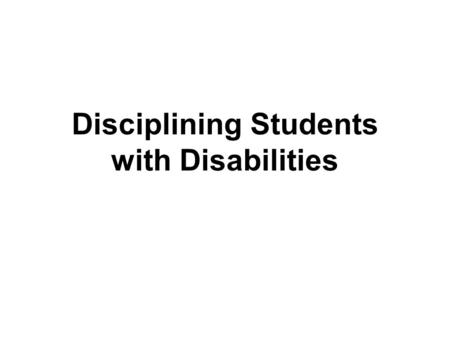 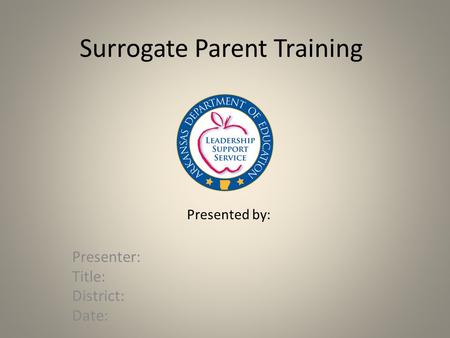 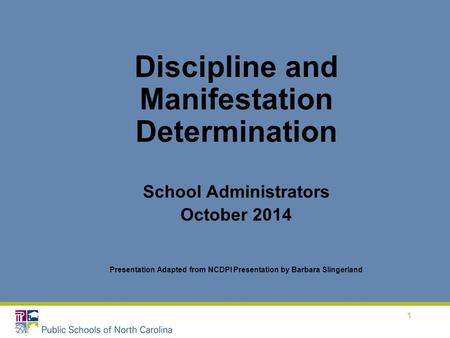 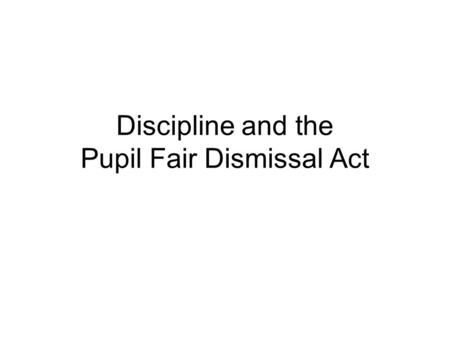 Discipline and the Pupil Fair Dismissal Act Special education students have a special set of entitlements: They comprise a “protected class”. Their IEP’s. 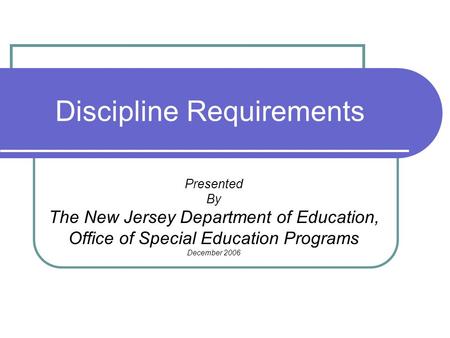 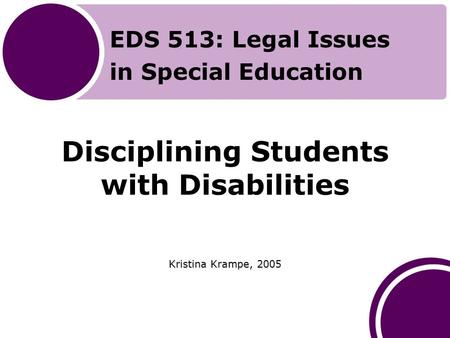