3 $100 Question from Finches Other than Atticus catching them, what was the main reason Scout wanted to stop playing the “Boo Radley” game?

4 $100 Answer from Finches When Jem rolled her into the Radley yard in the tire, she heard someone inside laughing. She thinks it was Boo.

5 $200 Question from Finches What were Scout’s two “crimes” at school?

7 $300 Question from Finches Why didn’t Scout tell the truth about why she hit Francis when she was first asked at Finch’s Landing?

8 $300 Answer from Finches Atticus had told her to keep her head up and her fists down, so she didn’t want to disappoint him.

10 $400 Answer from Finches Jem is acting bossier with Scout, and she resents it. They argue more, but they are still close and join forces. For example, who did Scout go to right after the fight when she thought there was a snake in her room?

11 $500 Question from Finches What does Alexandra believe is the cause of most human behavior?

13 $100 Question from Themes Which theme does this quote support and who said it? “It’s a sin to kill a mockingbird.”

14 $100 Answer from Themes Good vs. Evil or Destruction of Innocence Atticus tells the children this when he gives them their air rifles.

15 $200 Question from Themes Which theme does this quotation support and who says it? “I wanted you to see what real courage is.”

16 $200 Answer from Themes “Good in Unexpected Places” or “People aren’t all good or all bad” Atticus says it.

17 $300 Question from Themes Which theme does this support and who says it? “It was the first time I ever walked away from a fight.”

18 $300 Answer from Themes Coming of age. Scout says it when she refuses to get into a fist fight with Cecil Jacobs after he insults Atticus.

19 $400 Question from Themes Which theme does this quotation support and who says it? “I wouldn’t care if he couldn’t do a blessed thing.”

20 $400 Answer from Themes Coming of Age. Jem says it after Atticus shoots the rabid dog and the children find out about “one-shot Finch” being the “deadest shot in Maycomb County.”

21 $500 Question from Themes Which theme does this support and who says it? “You have gotten off on the wrong foot in every way.”

22 $500 Answer from Themes You never can understand a person until you consider things from their point of view. Miss Caroline Fisher (After talking to Atticus, Scout realizes Miss Fisher was mad at her because Miss Fisher didn’t know any different. She didn’t know the ways of the town.)

25 $200 Question from Characters Small for his age, stays with his Aunt Rachel (the Finches’ next-door neighbor) every summer, creative, tells “tall tales,” is 7 at the beginning of the story, lives in Meridian, Mississippi.

27 $300 Question from Characters Gossipy neighbor, busy body who minds everyone else’s business. Claims Boo Radley looked in the window at her.

29 $400 Question from Characters Poor farm boy whose family is “poor but proud.” Family never takes anything that they can’t pay back.

31 $500 Question from Characters Member of family whose home life is so bad that the town bends the rules. His father is a drunk who does not take care of his family. His mother is dead. He had “cooties” on the first day of school.

33 $100 Question from Potpourri Why did Miss Caroline handle things with Burris and Walter Cunningham so poorly?

34 $100 Answer from Potpourri She was new to the town, so she didn’t know about the families.

35 $200 Question from Potpourri Why did Scout rub Walter Cunningham’s face in the dirt?

36 $200 Answer from Potpourri She blamed him for getting her in trouble with Miss Caroline because Scout had explained to the teacher why he wouldn’t borrow the quarter from the teacher to eat lunch.

37 $300 Question from Potpourri What is the main reason the people of the town dislike the Radleys?

38 $300 Answer from Potpourri They keep to themselves. Ex: They worship at home when going to church is the main recreation for the people in Maycomb.

39 $400 Question from Potpourri What does Miss Maudie think about the Radleys? Two things.

40 $400 Answer from Potpourri She thinks they have the right to do whatever they want to do as long as they don’t bother anyone else AND they have a right to their privacy.

41 $500 Question from Potpourri What two things does Jem learn from the death of Mrs. Dubose?

42 $500 Answer from Potpourri That there is a different kind of courage than physical courage like a man with a gun—courage is knowing you are beat before you start but doing something anyway because it is the right thing to do AND you never know a person until you walk around in their skin.

44 $100 Answer from Quotes Scout Scout thinks that because the Cunninghams are not as wealthy or respected as the Finches, they do not need to be treated as guests. Calpurnia teaches her any person you bring into your house is a guest and deserves equal respect.

45 $200 Question from Quotes Who says it and what does it mean? “…but sometimes the Bible in the hand of one man is worse than a whiskey bottle in the hand of—oh, of your father.”

46 $200 Answer from Quotes Miss Maudie Miss Maudie is explaining that religion can be just as destructive as alcohol.

47 $300 Question from Quotes Who says it and what does it mean? “You never really understand a person until you consider things from his point of view … until you climb into his skin and walk around in it.”

48 $300 Answer from Quotes Atticus Atticus is explaining that you can only really understand a person once you’ve experienced life and experiences from his/her point of view.

49 $400 Question from Quotes Who says it and what does it mean? “Atticus Finch is the same in his house as he is on the public streets.”

50 $400 Answer from Quotes Miss Maudie She is explaining that Atticus is an honorable and upstanding man who acts the same both at home and in the town. He is not a hypocrite. 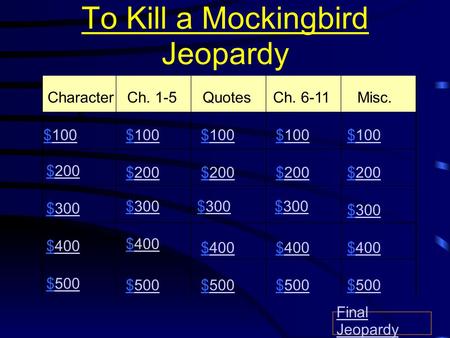 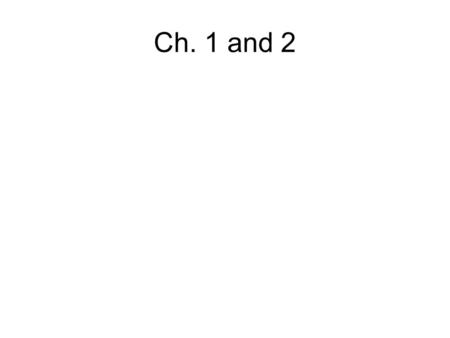 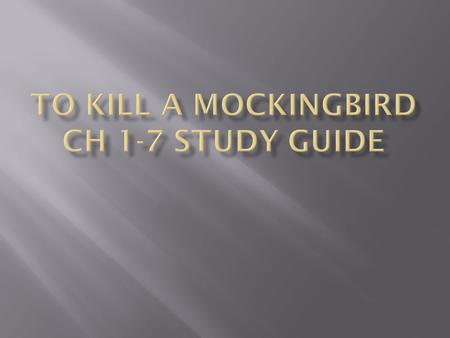 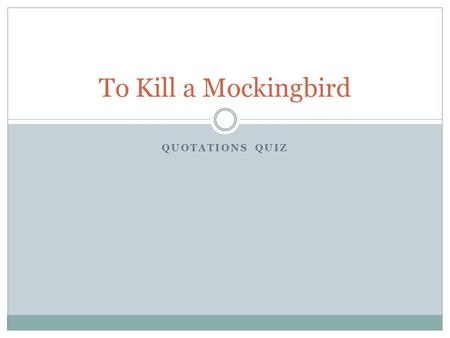 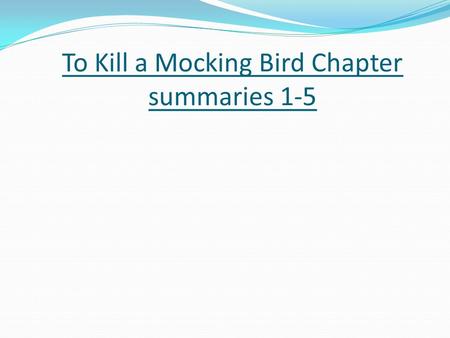 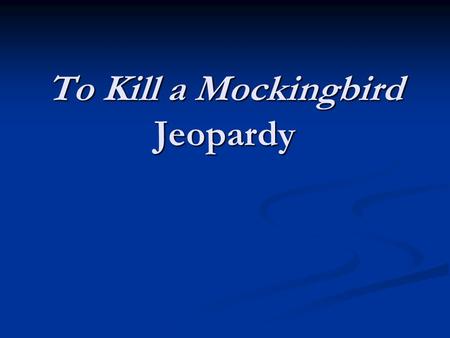 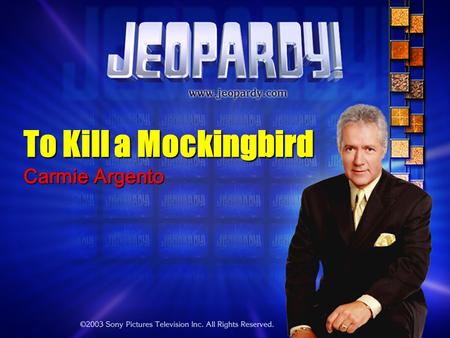