2 ORIGINS OF THE COLD WAR After being Allies during WWII, the U.S. and U.S.S.R. soon viewed each other with increasing suspicion Their political differences created a climate of icy tension that plunged the two countries into an era of bitter rivalry known as the Cold War The Cold War would dominate global affairs from 1945 until the breakup of the USSR in 1991

3 POLITICAL DIFFERENCES
At the heart of the tension was a fundamental difference in political systems America is a democracy that has a capitalist economic system, free elections and competing political parties In the U.S.S.R., the sole political party – the Communists – established a totalitarian regime with little or no rights for the citizens Soviets viewed Marx, Engels and Lenin as founders of Communism

4 Background - Why a Cold War?
Differing aims in Europe WWII had affected the U.S. and USSR differently The U.S. emerged as the world’s richest and most powerful country: only 400,000 Americans died during the war, and industry and cities remained intact

5 Background - Why a Cold War?
The USSR was devastated after the war: 20 million deaths (1 in 4 Soviets dead or injured), many cities and factories demolished, farmlands destroyed These differences meant that the U.S. and the USSR envisioned postwar Europe very differently

7 Background - Why a Cold War?
These differing aims brought the two Superpowers into conflict the U.S. was afraid of a global communist conspiracy led by the USSR, and the USSR feared that the U.S. was calling for a worldwide capitalist expansion

8 Background - Why a Cold War?
During the war, Soviet troops had remained behind in each of the Eastern European countries “liberated” from the Nazis

9 Background - Why a Cold War?
After the war, Stalin used these troops to help install communist governments, creating buffer states. Stalin believed that capitalism and communism could not coexist and that war was certain. By creating buffer states, he was hoping to protect the USSR from invasion by the west.

10 Winston Churchill called the result an “Iron Curtain” that had descended on Europe and was separating East from West. The Iron Curtain was a metaphor: on one side were the free nations of Western Europe, on the other side were the communist nations controlled by the USSR.

13 The U.S. Response Three policies show how the U.S. was determined to challenge Soviet domination and protect its interests in Europe

15 The U.S. Response Containment: the U.S. said it wouldn’t interfere
where communism already existed, but it would prevent any expansion by creating alliances and helping countries resist Soviet advances

16 The U.S. Response The Truman Doctrine: the U.S. would help countries resisting communism by giving them monetary aid

17 The U.S. Response Three policies (con’t)
The Marshall Plan: the U.S. authorized a total of $13 billion in aid to any European country that requested it According to the cartoon, what is the relationship between the U.S. and Europe?

18 SOVIETS DOMINATE EASTERN EUROPE
The Soviet Union suffered an estimated 20 million WWII deaths, half of whom were civilian As a result they felt justified in their claim to Eastern Europe Furthermore, they felt they needed Eastern Europe as a buffer against future German aggression

19 STALIN INSTALLS PUPPET GOVERNMENTS
Stalin installed “satellite” communist governments in the Eastern European countries of Albania, Bulgaria, Czechoslovakia, Hungary, Romania, Yugoslavia and East Germany This after promising “free elections” for Eastern Europe at the Yalta Conference In a 1946 speech, Stalin said communism and capitalism were incompatible – and another war was inevitable

21 The “Iron Curtain” From Stettin in the Balkans, to Trieste in the Adriatic, an iron curtain has descended across the Continent. Behind that line lies the ancient capitals of Central and Eastern Europe Sir Winston Churchill, 1946

22 THE TRUMAN DOCTRINE The “Truman Doctrine”
was first used in Greece and Turkey in the late 1940s, vowed to provide aid (money & military supplies) to support “free peoples who are resisting outside pressures” By 1950, the U.S. had given $400 million in aid to Greece and Turkey 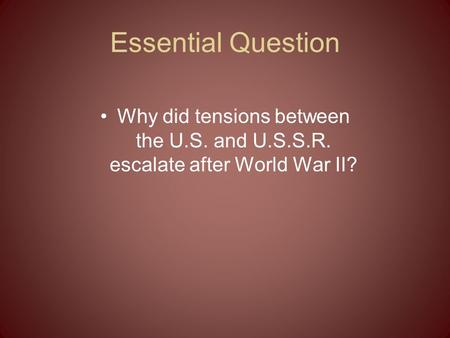 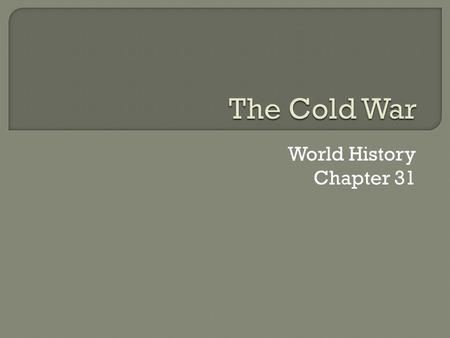 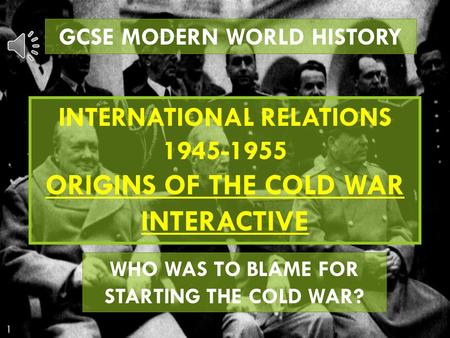 GCSE MODERN WORLD HISTORY INTERNATIONAL RELATIONS ORIGINS OF THE COLD WAR INTERACTIVE WHO WAS TO BLAME FOR STARTING THE COLD WAR? 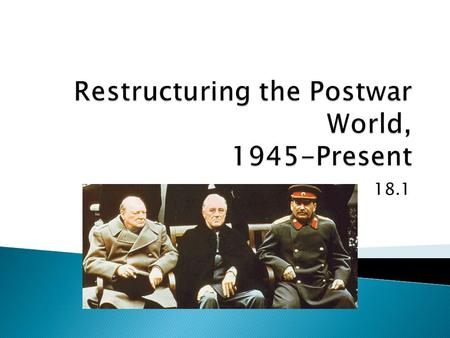 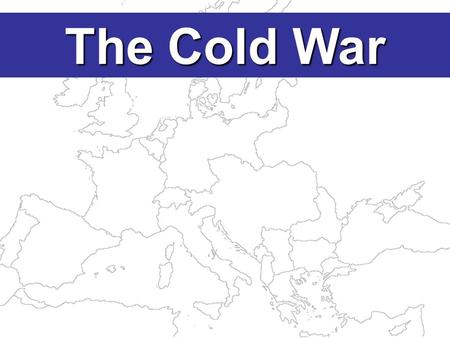 The Cold War The end of WWII caused major changes: 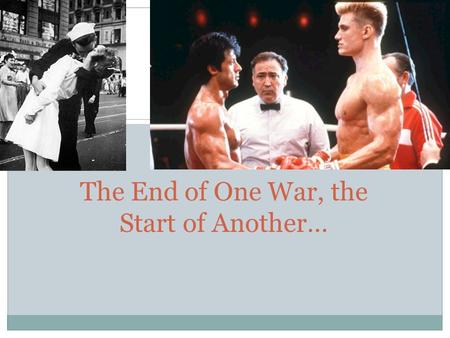