2 Land Act of 1800 Northwest ordinance of 1787: Established process where territories in West could become States. Under act Americans were able to buy land in small parcels and on credit. Federal land offices appeared across the west, making the transfer of land easier from the government to private citizens.

3 Control of the Mississippi
River big source for transportation of goods. Spain controlled New Orleans. 1795: Washington sends Thomas Pinckney to keep vital port open. Pinckney Treaty: Spain agreed to let American ship their goods down the miss. And store them in NO.

4 Napoleon and the French
Mississippi River important to American trade to foreign markets. Napoleon took over Spanish land including New Orleans. Charged Large sums of money to Americans to pass through. Jefferson appointed Robert Livingston and James Monroe to be sent to Paris in 1803 to buy the city of New Orleans.

5 The Louisiana Purchase
Napoleon first wanted to create a new French Empire in the America’s. After failing to crush a rebellion on the French Island of Haiti led by Toussaint L’Ouverture, he changed his mind. Also wanted to sell all of the French claims known as the Louisiana Purchase. Not wanting him to wait on this idea, Monroe and Livingston offered Napoleon $15 million.

6 The Lewis and Clark Expedition
Congress agreed to finance Jefferson’s call for an expedition to explore the area included in the Purchase. Meriwether Lewis, William Clark. Goals were: To search for river routes to the western ocean. Make contact with the Native Americans living in the territory. Gather information about the region’s natural resources. Hired a French-Canadian fur trapper and his wife Sacajawea

7 The Expedition… 50 men made up the “Corps of Discovery”.
York: Enslaved African American who was Clarks companion since childhood also joined.

10 To the Pacific… Built Canoes.
Floated down the Columbia River into the Pacific Northwest. November 7, 1805: Clark wrote “Great Joy we have been so long anxious to see”. They reached their GOAL. 1806: Returned to St. Louis.

11 Pike Explores the West…
Zebulon Pike: From St. Louis Explored: Upper Miss. River. And Arkansas River. Parts of Present day Colorado and New Mexico. 1806: Mountain Peak rising above Colorado plains. Today called “Pikes Peak” Spanish Territories: Arrested taken into Mexico. Escorted back to the U.S. Striped all of maps and Journals. Hid one Map in the barrel of his Gun.

12 Checking for Understanding.
What was the Louisiana Purchase? What was the overall goal of the Lewis and Clark Expedition? Who was Zebulon Pike? 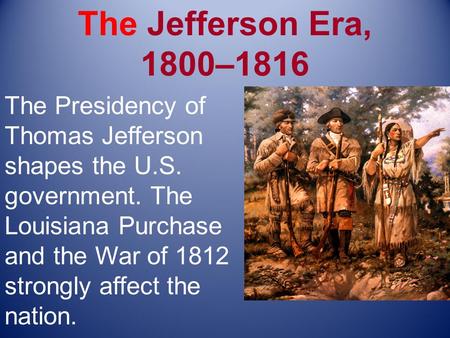 Detail of William Clark with Shoshone guide Sacagawea at Three Forks of the Missouri in The Presidency of Thomas Jefferson shapes the U.S. government.