Presentation on theme: "Unit 3 #1 1)Identify what type of constitutional interpretation President Jefferson used when he purchased Louisiana. 2)Describe the details of the Louisiana."— Presentation transcript:

3 In 1801, Spain signed a secret treaty with France to return Louisiana Territory to France. Americans had been moving westward into the Ohio River and Tennessee River valleys, and these settlers were highly dependent on free access to the Mississippi River and the strategic port of New Orleans. Jefferson feared that France would soon seek to dominate the Mississippi River and the Gulf of Mexico. In a letter to U.S. minister to France, Robert Livingston, Thomas Jefferson stated, "The day that France takes possession of New Orleans...we must marry ourselves to the British fleet and nation."

4 France was slow in taking control of Louisiana, but in 1802 Spanish authorities, acting under French orders, revoked a U.S.-Spanish treaty that granted Americans the right to use New Orleans. In response, Jefferson sent future U.S. president James Monroe to Paris to aid Livingston in the New Orleans purchase talks. In mid-April 1803, shortly before Monroe's arrival, Napoleon asked a surprised Livingston if the United States was interested in purchasing all of Louisiana Territory. Napoleon Bonaparte (French)

5 At the end of April 1803, the U.S. agreed to pay $15 Million to acquired the Louisiana Territory, an area roughly 828,000 square miles of land. The treaty was dated April 30 and signed on May 2. In October, the U.S. Senate ratified the purchase. In December 1803 France transferred authority over the region to the United States. Video Clip

7 1)The Louisiana Purchase doubled the size of the United States. 2)Jefferson used a loose interpretation of the constitution (elastic clause).

8 Jefferson appoints Meriwether Lewis to lead an expedition to collect scientific data from the new territory. Lewis picked William Clark to be his second in command. The group (started with 50) shrank in size but added Sacajawea. She was the guide and interpreter. It expedition took 2 years and 4 months.

Download ppt "Unit 3 #1 1)Identify what type of constitutional interpretation President Jefferson used when he purchased Louisiana. 2)Describe the details of the Louisiana." 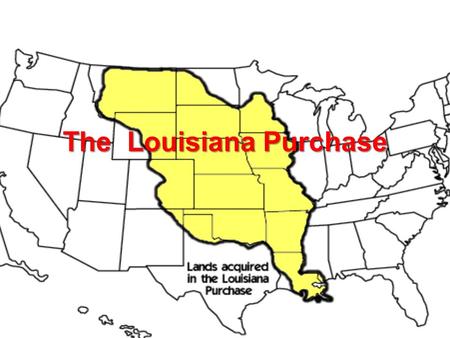 The Louisiana Purchase. Background Cont. After the U.S won its independence from Britain in 1783 a major concern became unrestricted access to the Mississippi. 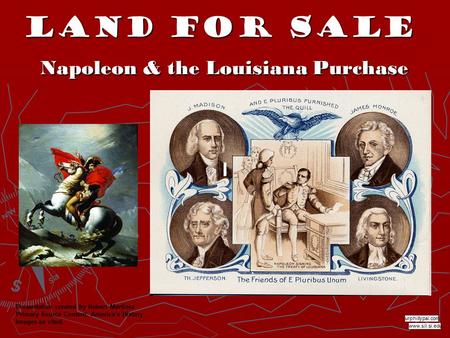 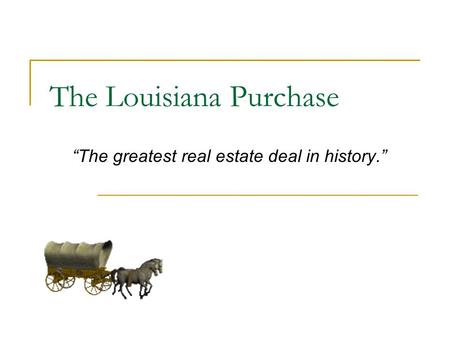 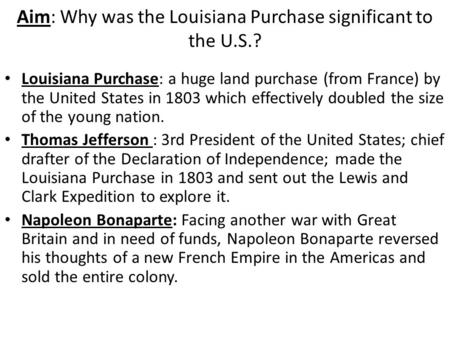