2 Objectives Describe how early pioneers met the challenges of frontier life. Explain why President Jefferson agreed to buy Louisiana. Describe the expedition to explore the lands of the Louisiana Purchase.

4 Content Focus In the 1700s and 1800s, many immigrants came to the United States. Some crossed over the Cumberland Gap to settle the frontier.

7 HOW? Ships would land at major ports along Atlantic coast
New York – popular port for immigrants

8 WHERE? Many wanted to go to frontier WEST!

10 The Cumberland Gap Today located where TN, VA, KY meet
Native Americans had a trail over the Appalachians through the gap.

13 Why was Wilderness Road important?
It helped pioneers cross the Appalachian mountains – opening up the West.

14 Many Americans searched for a _____ to pass through Appalachian Mountains.
GAP

15 What was the first state West of the Appalachians?
Kentucky

16 Hardships The Wilderness Road was difficult No stores
Bring ALL supplies Many wanted to go anyway Why? East is over populated. Land west is cheaper and more available.

21 Who was the first governor of Tennessee?
John Seiver

22 Cause & Effect The effect is many new states are formed.
Because more people moved west. . .

27 France has problems! Going to war with Britian Short on money
Napoleon offers to sell ALL of Louisiana (800,000 square miles) for only $15 million

28 SOLD! April 30, 1803 the purchase is finalized
The Louisiana Purchase doubled the size of the U.S.

30 Why did France agree to sell Louisiana?
They needed money to fight a war against Britian

31 What agreement was made by Jefferson that doubled the size of the U.S.?
The Louisiana Purchase

42 Benefits MAPS  show mountain passes & major rivers
Brought back seeds, plants, and animals The work done by Corps of Discovery added to the knowledge Americans had about the lands that became the WEST.

47 What obstacle did Lewis & Clark find in their direct water route?
Rocky mountains 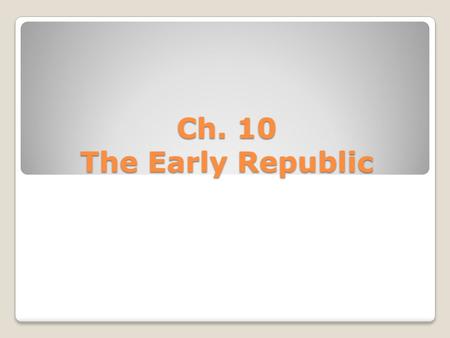 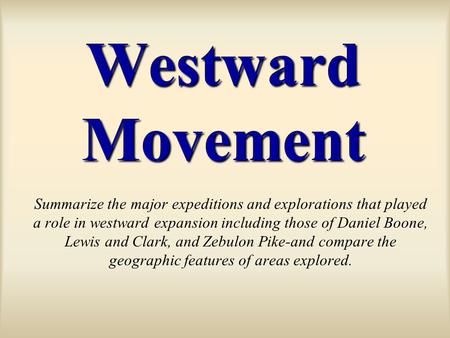