1 Russia (1825-1855) Assess the message of Nicholas I’s rallying cry “Orthodoxy, Autocracy, Nationalism” as way to understand Russia’s conservatism. Predict how the Crimean War will result in change within Russia.

2 Russia (1825—1914) After the death of Tsar Alexander I, the Decembrist Revolt occurred in 1825 – Under Alexander I, modernization of Russia began and greater freedoms were offered to the people Nicholas I crushed the Decembrist Revolt and continued autocratic policies – Created the Third Section  secret police “Orthodoxy, Autocracy, Nationality” became rallying cry of Nicholas I’s Russia CONFLICT: Westernizers wanted Russia to industrialize and set up a constitutional gov’t versus Slavophiles who wanted Russian culture to remain isolated from Europe

3 Russia and the Crimean War After its poor showing in the Crimean War, people were calling for reform Nicholas I would not contemplate reform BUT his successor Alexander II knew reform was needed

5 Russian Reforms under Alexander II Emancipation Proclamation of 1861 ended serfdom – positives – serfs gain rights to marry without permission, to buy and sell land, to sue in court and to pursue trades – negatives – serfs had to buy the land from their landlords; usually were given the poorest lands local government reform – local governments called zemstvos were a district assembly that dealt with local issues like education and social service. Zemstvos were still dominated by the landed aristocracy, but did provide a glimmer of political freedom

8 Alexander III Alexander III (r.1881-1894) will enhance repression and attempt to weaken the reforms of his father, Alexander II autocratic and repressive  “Orthodoxy, Autocracy, Nationality” returns as motto of gov’t strengthened secret police and censorship of the press Placed a greater importance of traditional values

9 p. 909--911 Industrial Development What economic successes did Russia experience between 1890—1914? Identify the figure and industrial reforms Social Unrest What factors led to the rise of social unrest?

11 Unrest in the Cities and Countryside By 1900, depression had led to high unemployment and industrial shutdowns social unrest – growth of industry does not improve lives of the peasants, many who have to work on the land of prosperous farmers known as kulaks

12 Nicholas II (r. 1894-1917) Alexander III died in 1894 Nicholas II lacked political wit and a firm will to lead Russia – Situation will worsen The Russian Social Democrats and the Social Revolutionaries began to gain strength in Russia – Both were Marxist

13 Vladimir Lenin – future leader of the communist revolution led Social Democrats who rejected the German ideas of gradual socialism and called for a revolution Social Democratic Party split into two: – Lenin’s faction, the majority or Bolsheviks – the moderate faction, the minority or the Mensheviks wanted to unite workers and peasants to overthrow the tsar (idea came about in 1905, but revolution didn’t occur till 1917)

14 The Revolution of 1905 https://www.youtube.com/watch?v=-gQ-s8W26Lk Bloody Sunday – tsar’s troops violently put down a protest leading to ordinary Russians no longer trusting the tsar worker groups called the soviets, not the tsar, basically control city of St. Petersburg Nicholas II issues October Manifesto promising a constitutional government – representative body, the Duma, put into place in 1907 – conservative in nature basically kept the power of the tsar in place – Civil liberties were extended to include freedom of speech, assembly, and press – Nicholas II announced he would reorganize his gov’t

15 Factionalism in the Duma The Duma was convened in 1906, but was plagued by internal factionalism – Monarchists constitutionalists who wanted to maintain the power of tsar vs. Constitutional Democrats who wanted a liberal representative system – improves agricultural production by encouraging individual ownership By 1907 Russia began a gradual economic recovery that quelled rebellion – Agricultural production was improved From 1907 to 1914, Nicholas II lacked the leadership needed to guide Russia Grigory Efimovich Rasputin – became the minister of finance to the tsar because his wife could heal the tsar’s hemophiliac son Uncouth and strange, tsar’s power is undermined after 1911 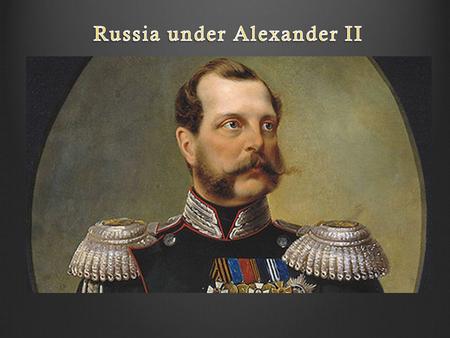 Alexander II ( ) Perhaps the greatest Czar since Catherine the Great Perhaps the most liberal ruler in Russian history prior to 20th century. 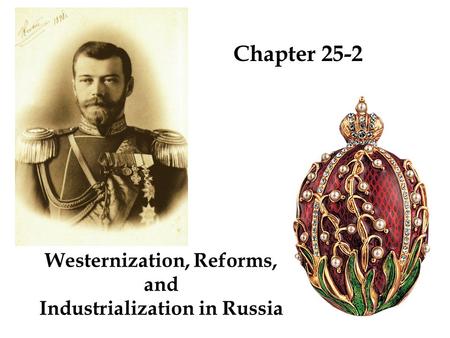 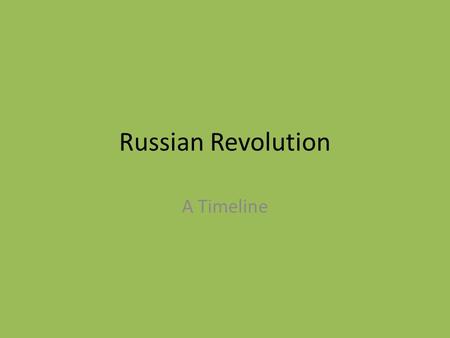 Russian Revolution A Timeline Nicholas II (Romanov) becomes Tsar. Announces “The principle of autocracy will be maintained by me as firmly and. 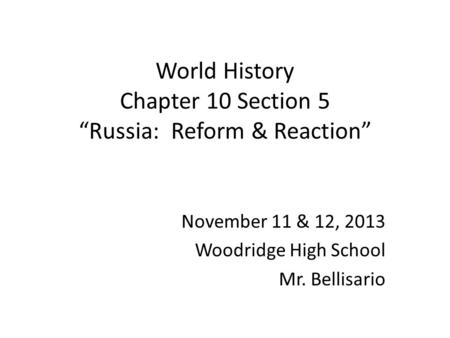 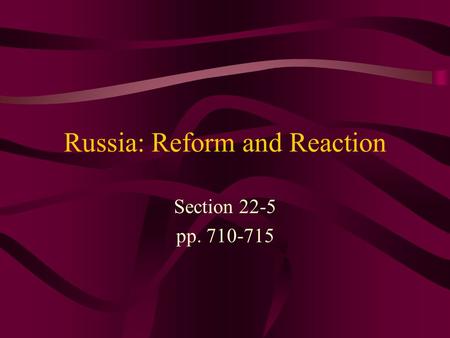 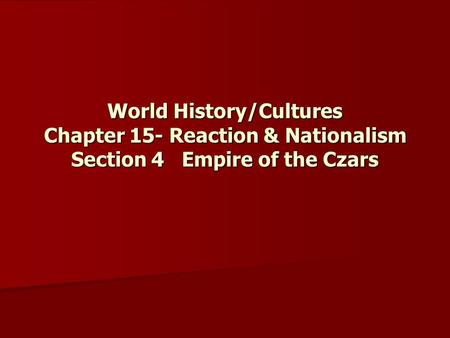 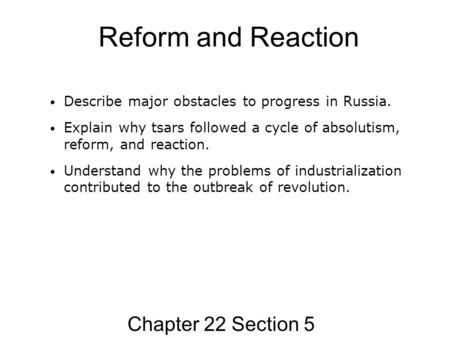 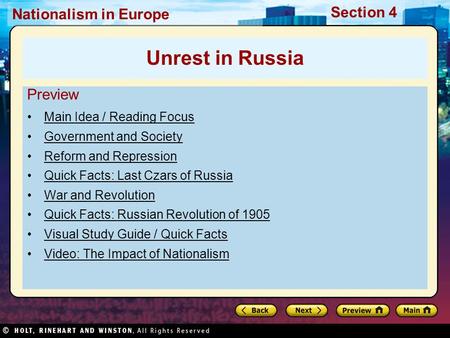 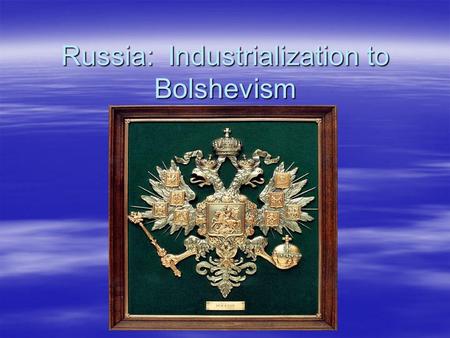 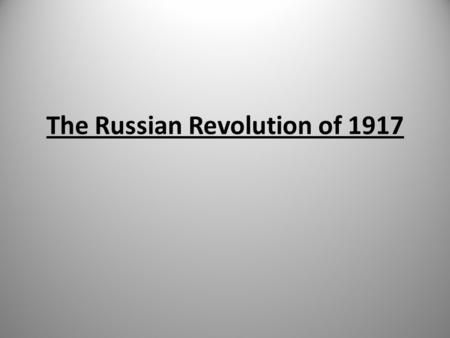 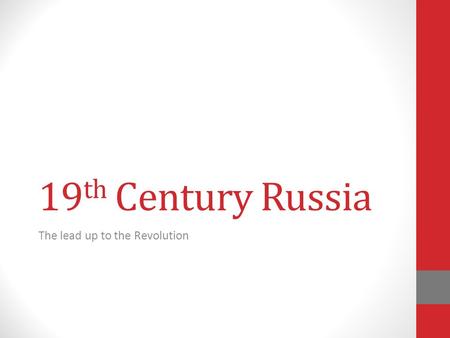 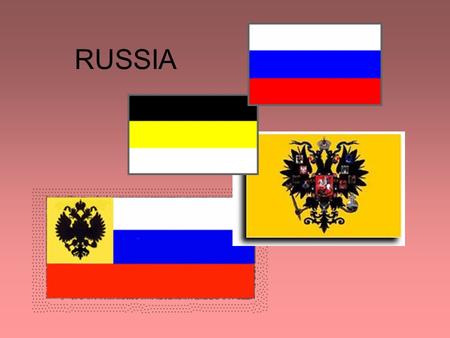 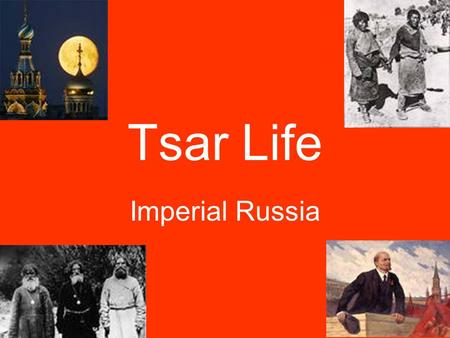 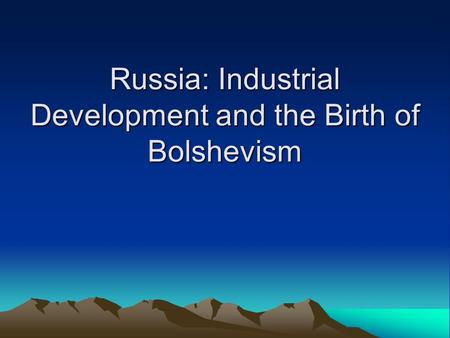 Russia: Industrial Development and the Birth of Bolshevism. 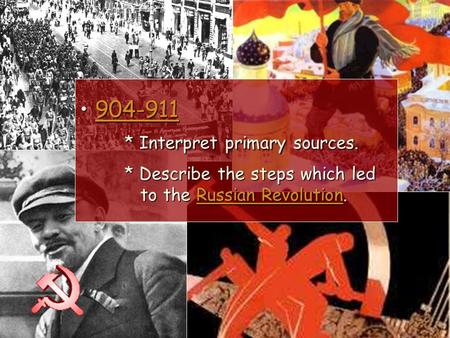 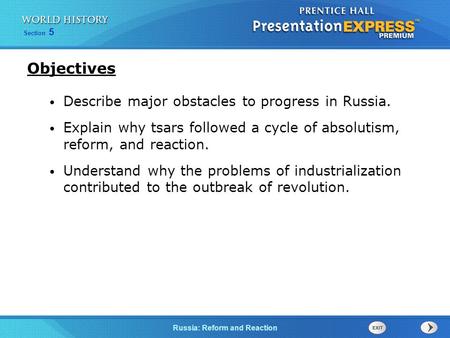 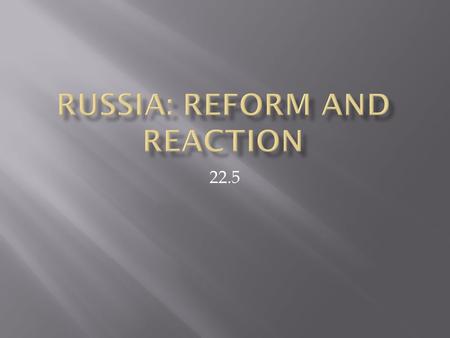 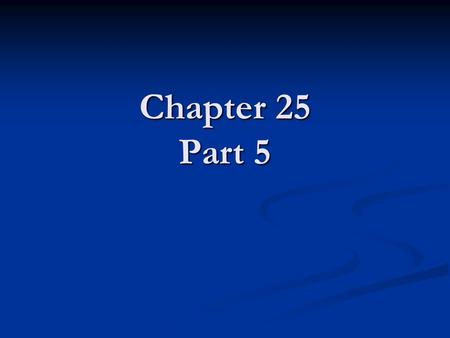 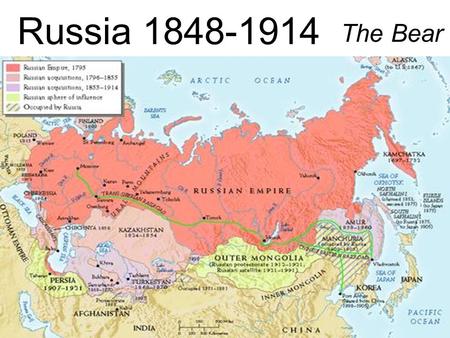 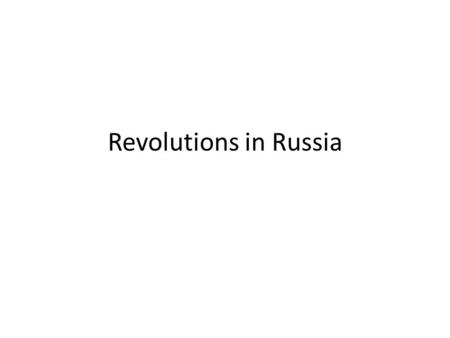