Lesson 1 for April 4, 2015. The three first gospels are known as the “synoptic” (related) gospels. They include many of the same stories. Each gospel.

Presentation on theme: "Lesson 1 for April 4, 2015. The three first gospels are known as the “synoptic” (related) gospels. They include many of the same stories. Each gospel."— Presentation transcript:

2 The three first gospels are known as the “synoptic” (related) gospels. They include many of the same stories. Each gospel was addressed to a different audience. Each Evangelist wrote his gospel being guided by the Holy Spirit.

3 Who was Luke (Colossians 4:14) ?  He was a gentile doctor who went with Paul to some of his missionary trips. He is the only non-Jewish writer who wrote a book in the Bible. Who was the addressee of his gospel (Luke 1:1-3) ?  Theophilus, a distinguished gentile. He also wrote the “Acts of the Apostles” to him (Acts 1:1). How did he get the information to write his gospel (Luke 1:1-3) ?  He researched diligently and he met eyewitnesses. Why did he write it (Luke 1:4) ?  Because he wanted to strengthen the faith of his audience.

5 “And he will turn many of the children of Israel to the Lord their God. He will also go before Him in the spirit and power of Elijah, ‘to turn the hearts of the fathers to the children,’ and the disobedient to the wisdom of the just, to make ready a people prepared for the Lord.” (Luke 1:16-17) A prophet arose again in Israel after 400 years of silence. John’s main mission was to “make a people ready” to accept the Messiah, their Savior.

6 How did Mary react to the announcement of her motherhood? She knew that was humanly impossible, since she was virgin. She accepted Gabriel’s words with faith: “For with God nothing will be impossible” (Luke 1:37). She submitted to God’s will (Luke 1:38). God has answers for all our doubts, no matter how big they are. He can do everything, even if it seems impossible to our human reasoning. “Then the angel said to her, ‘Do not be afraid, Mary, for you have found favor with God. And behold, you will conceive in your womb and bring forth a Son, and shall call His name Jesus.’” (Luke 1:30-31)

7 “And she brought forth her firstborn Son, and wrapped Him in swaddling cloths, and laid Him in a manger, because there was no room for them in the inn.” (Luke 2:7) Jesus isn’t a myth or a fictitious character. He is a real person who lived in a moment in history. Luke introduced the historical context of Jesus’ birth in Luke 2. In 8 BC, Augustus Caesar took a population census in the Roman Empire (v. 1). In order to fulfill the census, everyone should come back to their birthplace (v. 3). Joseph (sometime before 4 BC) came back to Bethlehem to register (v. 4). He took Mary with him (v. 5). Mary gave birth to Jesus in Bethlehem (v. 6-7).

8 “Then the angel said to them, ‘Do not be afraid, for behold, I bring you good tidings of great joy which will be to all people. For there is born to you this day in the city of David a Savior, who is Christ the Lord.’” (Luke 2:10-11)

9 “And when eight days were completed for the circumcision of the Child, His name was called Jesus, the name given by the angel before He was conceived in the womb. Now when the days of her purification according to the law of Moses were completed, they brought Him to Jerusalem to present Him to the Lord.” (Luke 2:21-22) Joseph and Mary were faithful believers. They followed the rules in “the law of Moses”: a)Circumcising the child 8 days after his birth. “And on the eighth day the flesh of his foreskin shall be circumcised.” (Leviticus 12:3). b)Presenting the child before the Lord 40 days after his birth. “And if she is not able to bring a lamb, then she may bring two turtledoves or two young pigeons—one as a burnt offering and the other as a sin offering. So the priest shall make atonement for her, and she will be clean.” (Leviticus 12:8).

10 Simeon took the child on his arms and prophesied about Him in the temple. There are important truths in his prophecy (Luke 2:29-35) 1.Jesus brings Salvation: “my eyes have seen Your salvation.” (v. 30) 2.Salvation comes from God: “Which You have prepared.” (v. 31) 3.Salvation is for everyone: “A light to bring revelation to the Gentiles, and the glory of Your people Israel.” (v. 32) 4.Salvation requires a decision: “this Child is destined for the fall and rising of many in Israel.” (v. 34) 5.The cross was part of the plan of salvation: “a sword will pierce through your own soul.” (v. 35) “Lord, now You are letting Your servant depart in peace, according to Your word; for my eyes have seen Your salvation.” (Luke 2:29-30)

11 “In contemplating the incarnation of Christ in humanity, we stand baffled before an unfathomable mystery, that the human mind cannot comprehend. The more we reflect upon it, the more amazing does it appear. How wide is the contrast between the divinity of Christ and the helpless infant in Bethlehem’s manger! How can we span the distance between the mighty God and a helpless child? And yet the Creator of worlds, He in whom was the fullness of the Godhead bodily, was manifest in the helpless babe in the manger. Far higher than any of the angels, equal with the Father in dignity and glory, and yet wearing the garb of humanity! Divinity and humanity were mysteriously combined, and man and God became one. It is in this union that we find the hope of our fallen race.” E.G.W. (Lift Him up, March 2)

Download ppt "Lesson 1 for April 4, 2015. The three first gospels are known as the “synoptic” (related) gospels. They include many of the same stories. Each gospel." 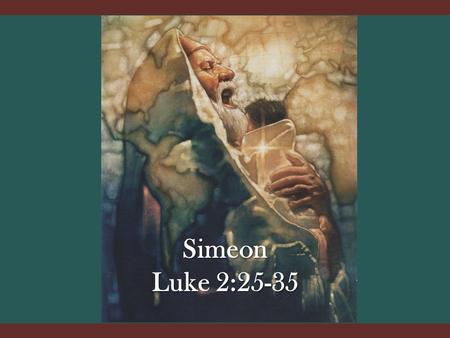 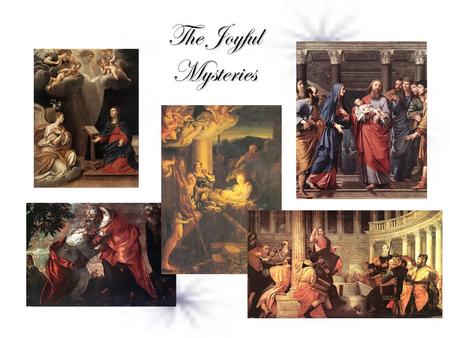 The Joyful Mysteries. 1 st Joyful Mystery: The Annunciation The Angel Gabriel announces: "Hail, full of grace! The Lord is with thee." Mary wonders at. 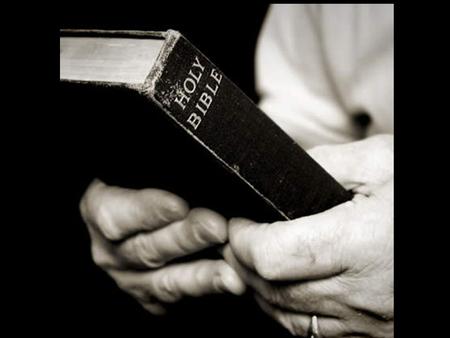 Luke 46 "My soul glorifies the Lord 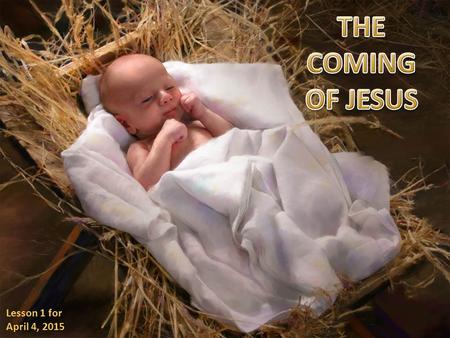 Lesson 1 for April 4, Who was Luke (Colossians 4:14) ?  He was a gentile doctor who went with Paul to some of his missionary trips. He is the only. 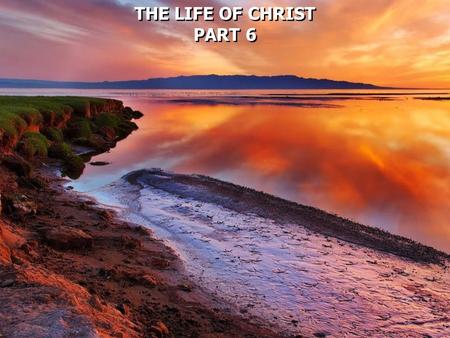 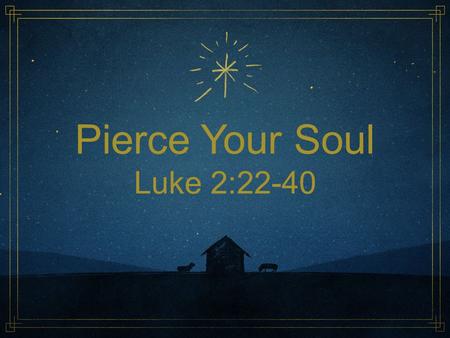 Pierce Your Soul Luke 2: Luke 2:22-40 (NRSV) 22 When the time came for their purification according to the law of Moses, they brought him up to. 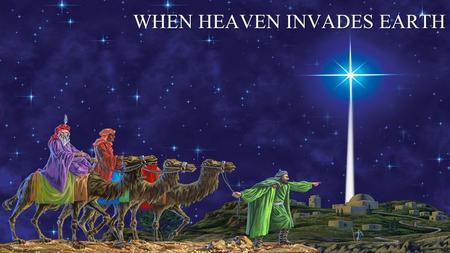 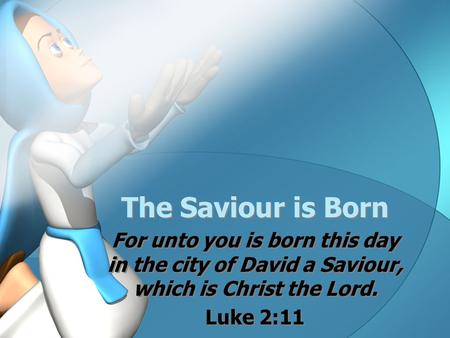 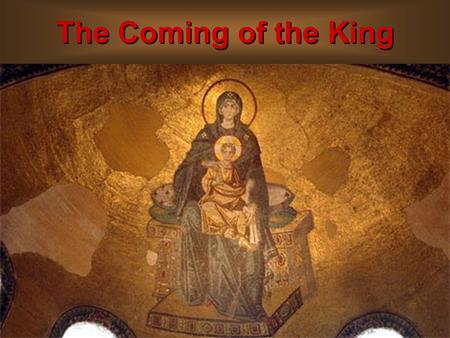 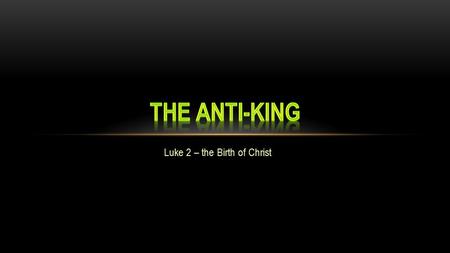 Luke 2 – the Birth of Christ. THE ERA OF GREAT KINGS. 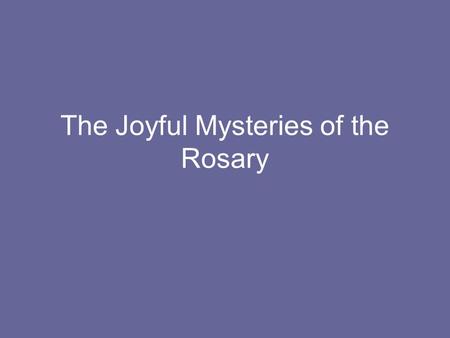 The Joyful Mysteries of the Rosary. 1. Annunciation.