Presentation on theme: "Functionalism To functionalists the family is at the heart of society and consequently they promote its value at every opportunity The New Right views."— Presentation transcript:

4 The isolated and ‘private’ nuclear family The functionalist view suggests that the nuclear family has become · Socially isolated from extended kin · More reliant on the Welfare State · Geographically separated from wider kin · More reliant on State nurseries etc The family is self-contained, inward looking with little contact with neighbours and community. Home leisure via TV, Video, Internet etc etc have made us more home-centred

6 Criticisms 1.The focus is on white MC families in the West 2.Ignores conflict within families 3.Ignores the damage done to women 4.Ignores the rising divorce rates In short a ‘rose coloured spectacle’ view ignoring the dysfunctions of family life. Functionalism

9 Berger 1993 The family is seen as a central feature of modern life. It promotes decency, manners, respect, fair play etc. The New Right

10 Halsey 1992 & Dennis 1993 Support key aspects of New Right views. They recognise problems of single parenting. Particular problem of absent fathers. Unemployment has affected ‘breadwinner’ role Drift to crime is inevitable. Halsey concedes that the structural problem of poverty may be more important than the absent father syndrome. The New Right

11 ‘Amidst all the sniggering (and outright revulsion), remains the fact that in the middle of all his family values, back-to-basics twaddle, Captain Greyness was cheating on his wife, conning the nation and being the worst kind of hypocrite’ Source http://www.squarecanary.com/cgi-bin/item.cgi?id=10871http://www.squarecanary.com/cgi-bin/item.cgi?id=10871 The New Right

12 Abbot & Wallace 1992 criticise the New Right from a socialist/feminist perspective see women as exploited in the ‘traditional’ family set up violence by men is not addressed. They criticise the anti stance on divorce, cohabitation, abortion, homosexuality etc. They promote tolerance for different forms of family patterns Evaluation Of The New Right

13 Most of the early Marxist work on the family was written by Engels (Marx's right hand man). Essentially Engels postulated that the development of private property came when 'mankind' settled on the land. The need for men to know whom their offspring were led to patriarchal control of women. Women were forced into the home to look after children when industrialisation came along and thus the future wage slaves were produced. Marxism

14 Marxist feminists have taken up this issue and advocate the overthrow of capitalism as being necessary to free men and women from this position of slavery. Marxism

15 Zaretsky 1976 argues that the family is the main prop to the capitalist system. It ties the working class man to his work as he needs to work hard to 'provide' for his family. In his own 'castle' he can relieve some of the frustrations of work. Responsibilities of family life keep the workers docile!

16 Marxism Criticisms Marxists put the economic above all else and ignore the good things about family life. Some researchers point to the universality of the nuclear family (i.i. it is found everywhere) as proof of its popularity Russia in 1917 and Cambodia in 1975 tried to get rid of the family but failed.

17 Feminism has argued that women have suffered prejudice and discrimination simply because of their gender. Women need to be free from these injustices of patriarchy and particularly in the sphere of family, home and work. However, not all feminists sing from the same hymn sheet and 5 main flavours of feminism are presented here Feminism

18 Marxist Feminists Advocate the overthrow of capitalism as being necessary to free men and women from a position of slavery. Women are seen as cheap and exploitable in the labour market where constraints of childcare keep them concentrated in low paid jobs. They are a 'reserve army of labour' to be called upon when needed. Hence many women take part time jobs with shop and office work being popular choices. Feminism

19 Socialist Feminists patriarchy is the problem men have power in all walks of life they advocate a 2 pronged attack 1. Fight capitalism 2. Fight patriarchy Feminism

24 Evaluation:- There are different ‘versions’ of radical feminism Extreme Leeds group advocate Lesbianism But not all are anti men and anti family Many want to fight within the context of family life Marxism does not give the answer Radical feminists

25 Black Feminists Black feminists feel that other feminist ‘flavours’ have ignored the ethnic differences that exist between women. Why do African-Caribbean women have such a high rate of single parenting, why are Asian families more patriarchal.? Plus there are many varied cultural and religious issues faced by women of colour

26 There are different varieties of feminism and they criticise each other thus weakening their overall position Many now see these views as dated – the battle has been won with many women doing well in education, work etc Most women do not see men as the ‘enemy’ – they want relationships with them Groups like The New Right argue that equality is not a good thing – the full time mother role has been frowned upon but is essential for rearing young children Criticisms Of Feminism

28 Berger & Kellner 1964 examined marriage and relationships between spouses Looked at meanings attached to being ‘husband’ & ‘wife’ These are centred on mutual expectations, obligations and negotiations between partners. Interpretivists

29 Mansfield & Collard 1988 used in-depth interviews to look at the process of becoming a married couple They found…. 1.Both partners usually worked (paid employment) but the female did most housework. 2.Husband’s work was given greater importance. 3.There was a ‘symmetrical understanding’ - both partners expected a sharing of household responsibilities. Interpretivists

30 Charles & Kerr 1988 Used in-depth interviews and diaries with women with pre-school children to focus on women,food and families. They found…. 1.A proper meal (meat and veg) at least once a day was important 2.Meals were seen as important features of socialisation - learning manners etc. 3.Meals seen as indicators of happy family life. 4.Class differences were apparent MC more likely to sit at the table. 5.Women are main preparers of meals and invest a lot Interpretivists

32 Criticisms Of Interpretivists 1. The studies are small scale and therefore unrepresentative 2.. They are often criticised for being too subjective 3. Wider social factors may be ignored e.g. social class Interpretivists

34 Denzin 1987 suggests 2 further key factors :- 1.More children are being cared for by someone other than a parent. 2.TV has become an important agent of socialisation. This causes confusion as the boundaries between the worlds of fiction and reality become blurred. Post Modernism

Download ppt "Functionalism To functionalists the family is at the heart of society and consequently they promote its value at every opportunity The New Right views." 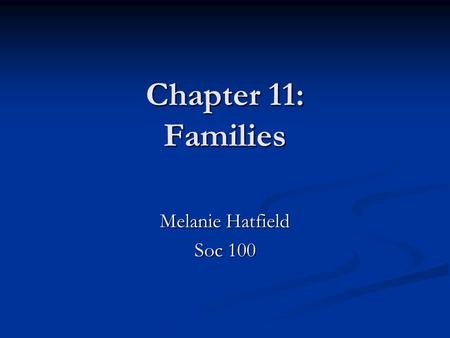 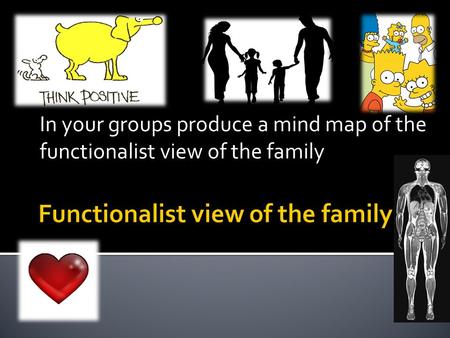 Functionalist view of the family