4 Words that Separate Subjects and Verbs
When the subject and verb in a sentence are separated by other words, mentally screen out those words and make the verb agree with the subject. Ex: Joe, as well as John, is going to the game.

6 Indefinite Pronouns When used as subjects, some indefinite pronouns are always singular and some are always plural. Others can be either singular or plural, depending on how they’re used.

7 Indefinite Pronouns That Are Always Singular
Each, everyone, nobody, anything, either, everybody, nothing, someone, neither, everything, anyone, somebody, one, no one, anybody, something, another, much Ex: Neither Tom nor Kate is coming. Everybody is going to the game.

8 Indefinite Pronouns That Are Always Plural
Several, few, both, many Ex: Several of the students are on the field trip. Few students are going tomorrow.

9 Indefinite Pronouns That Can Be Either Singular or Plural
Some, all, most, none, any, more Ex: Most of the students are going. Most of the money is going toward a new gym.

11 Compound Subjects A compound subject whose parts are joined by and usually requires a plural verb. Ex: Tom and Kate are going. However, a subject containing and takes a singular verb if it names a single thing. Ex: Peanut butter and jelly is my favorite type of sandwich.

12 Compound Subjects A subject containing and also takes a singular verb if it consists of singular parts modified by each, every, or many a. EX: Almost every teenager and young adult has been influenced by music. Each student and teacher has a shot record.

13 Compound Subjects When the parts of a compound subject are joined by or or nor, the verb should agree with the part closest to it. Katie or Macy is taking Marley home. Jack nor Trey is going to the dance.

14 Now You Try Complete questions 1-16 on page 97 of your grammar workbook.

15 Collective Nouns Collective nouns, which name groups of people or things, can take either singular or plural verbs, depending on how they are used. Ex: My family is going on its annual vacation. The family are going their separate ways.

16 Phrases and Clauses Phrases and clauses used as subjects always take singular verbs. Ex: To have grown fingernails totaling 241 inches is Chillal’s claim to fame. What is hard to believe is that fingernails could grow that long.

17 Singular Nouns That End in S
Some nouns that end in s look plural but are actually singular. When used as subjects, these nouns take singular verbs. Ex: The news is on Channel 4. However, words that end in s and describe a thing with two equal parts take plural verbs. Ex: scissors, pants, The scissors are on my desk.

18 Numerical Amounts and Titles
Numerical amounts and titles often look like plurals. However, they usually refer to single units and take singular verbs. Ex: Ten months is the amount of time one must wait for an acceptance letter.

19 Fractions A fractional number can take either a singular verb or a plural verb, depending on its meaning in the sentence. Ex: Nine-tenths of the book is about dogs. Nine tenths of my friends have read it.

21 Inverted Sentences In inverted sentences and in many questions, subjects follow verbs. When writing such a sentence, identify the subject and make the verb agree. Ex: Was the longest tennis match more than five hours? Into the record book have gone Edberg and Chang because of that match.

22 Here and There In sentences beginning with here or there, the subjects usually follow the verbs. Ex: There have been no absences today. Here is the list of absences. 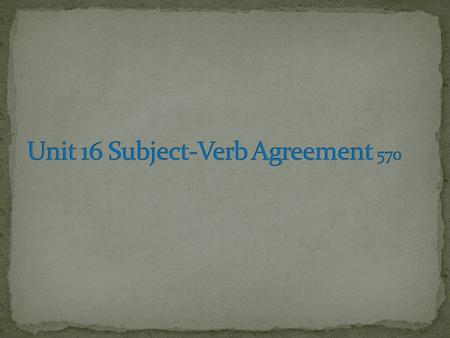 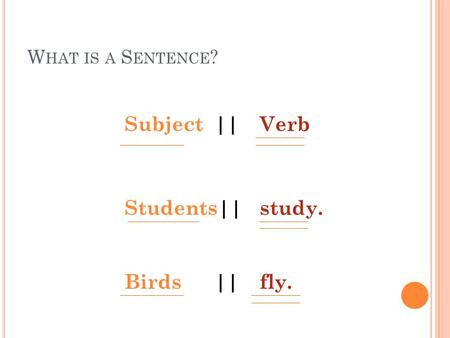 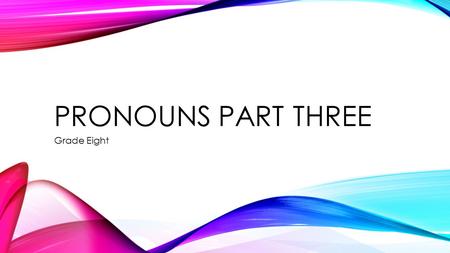 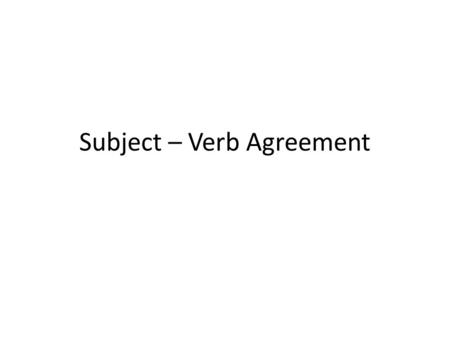 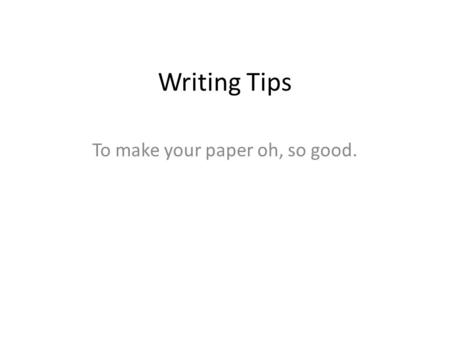 Writing Tips To make your paper oh, so good.. Passive and Active Voice Sentences are much stronger when the subject is doing the action. Often times, 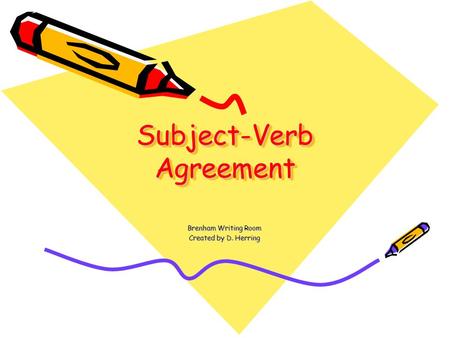